Architect Massimiliano Locatelli has dedicated his life to quality, creativity, and love of art. Since the mid-1990s, he has been the head of Locatelli Partners. With his team he has carried out interventions in historical places in Milan, such as the ancient church of San Paolo Converso, in Piazza Sant’Eufemia, he has created innovative structures such as a house built with a 3D printer. He has exported Italian taste to every corner of the world, from New York to Vietnam, from Paris to Mumbai. 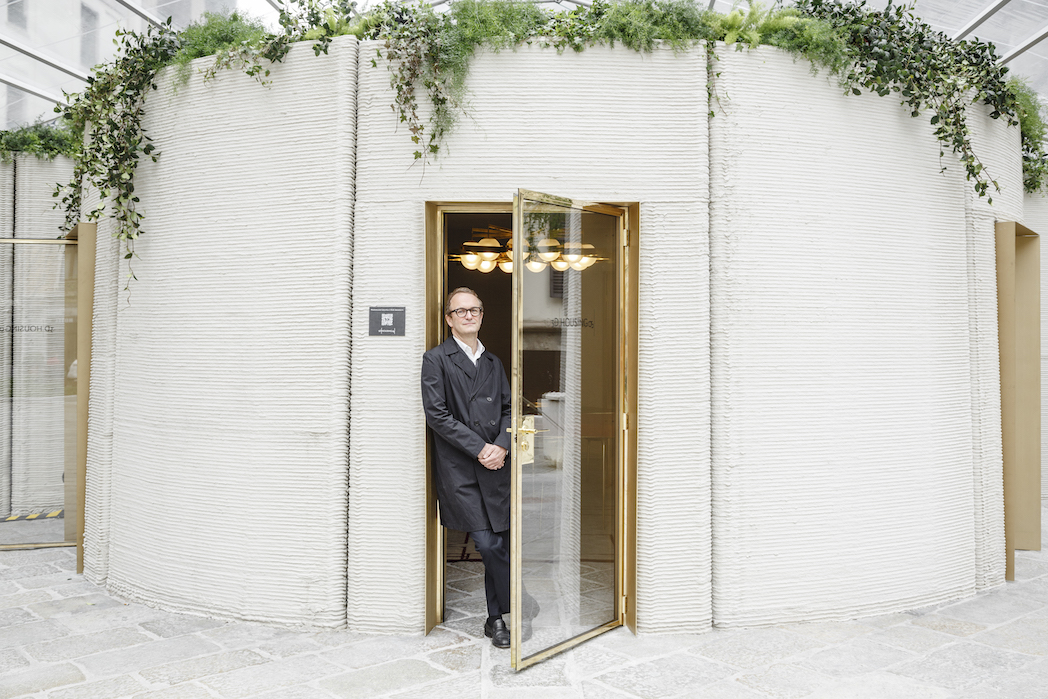 I meet him in his office in Via Corridoni. The space is flooded with natural light. The works of art on the walls stand out among the employees who tap on the computers. He answers my first question without hesitating: «Villa Necchi Campiglio, built on a project by the architect Piero Portaluppi: this is the place that should be put first».

Here is the residence built between 1932 and 1935 by the upper-class Milanese Necchi Campiglio couple, educated and enlightened industrialists. «Balla, Boccioni, De Pisis, Carrà, Morandi, Sironi: their paintings can still be admired today in the house that has become a historic residence», he explains. «But it would be a mistake to visit it only for those masterpieces», he explains. «The villa must be discovered in its entirety.»

Locatelli explains that Villa Necchi Campiglio represents an architecture made for a family of collectors where container and content were strictly correlated since the earliest stages of the project. It is an example of how the Brianza craftsmanship, with its formidable laborers, was brought into a Milanese bourgeois house. It is the symbol of how interior design, building construction and figurative art can be combined in a single object.

Locatelli’s eyes are shining. He has the restless look of someone who would like to be in the place they’re is talking about.«If you look at every detail, you can visit Villa Necchi Campiglio a hundred times, and each time you would discover something new» he says.

It’s a short walk (less than twenty minutes) to the second place he recommended: via Giorgio Jan, 15, is where the Boschi Di Stefano foundation is based: an apartment-made-museum in a building designed once again by Portaluppi.

He’s right: I know the historical Boschi Di Stefano residence. Inside there are about 300 of the works that Antonio Boschi and his wife Marieda Di Stefano collected in their lifetime. Severini, Boccioni, Funi, Marussig, Tozzi, Carrà, Casorati: it’s like having an art history manual in front of you and seeing twentieth-century Italian masterpieces appear one after another.

«It is surprising to find a very strong combination of marvellous architecture and excessive art collection here.»

«I saw photos of the house before it opened to the public,» Locatelli tells me. «There were paintings everywhere, stacked one on top of the other: they had more than two thousand, some were even propped against the windows. They almost lived in the dark: they were like two luxury bums who sought refuge in their love for their art, linked not to individual objects but to the entire indivisible collection.».

Even now, visiting those places (the house is open to everyone, free of charge) allows you to breathe a bit of that atmosphere, to walk into a dream of timeless art.

But the real gem is in the central Via Montenapoleone.«Thousands of people pass through that street every day, but they all look at clothes in the windows. Instead, you just have to look up and you’ll discover more than one wonder».

«The Loro Piana showroom is now at number 27», explains Locatelli, «but there was once the Tecno-Mobili office, founded by the architect Osvaldo Borsani, who commissioned the second-floor balustrade to an unknown artist of the time: a certain Lucio Fontana…». Yes, the “slash” artist grappling with a piece of architecture that no one even looks at anymore. «Even today you can see it has a very modern feel to it». 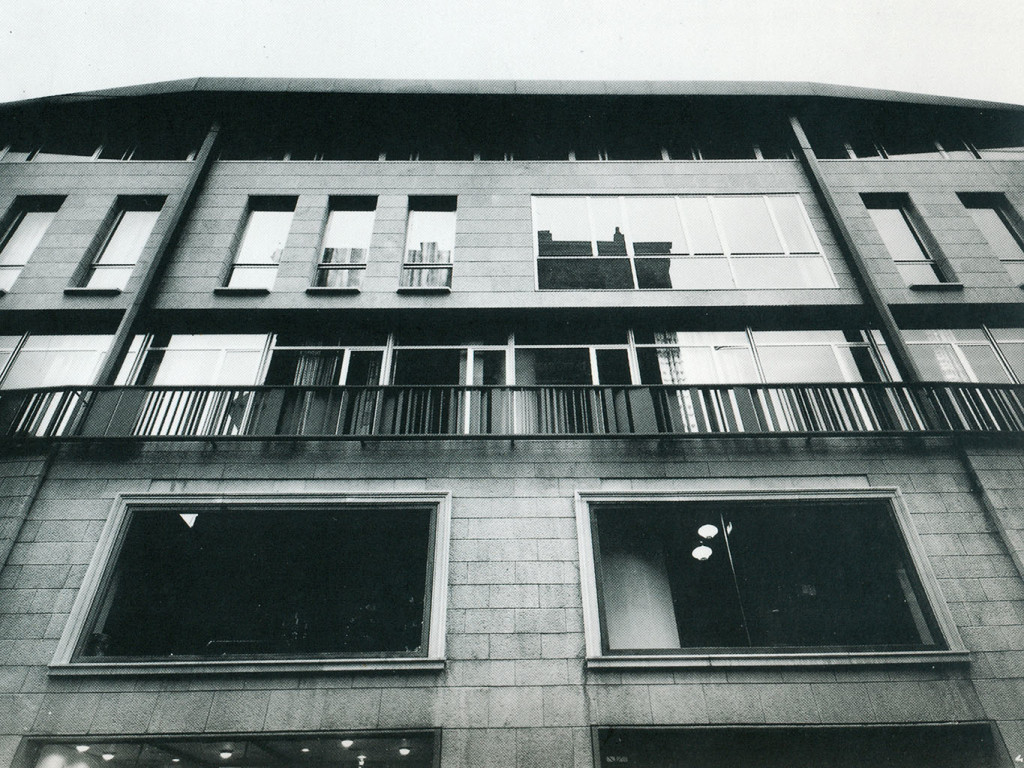 Fontana’s balustrade, the third stop in this mini-trip, is «the symbol of an era in which art and design were linked by a double thread», Locatelli explains. He tells me that the artist designed many pieces of furniture. And several other painters and sculptors, later to become famous, worked on a Tecno special collection with him. 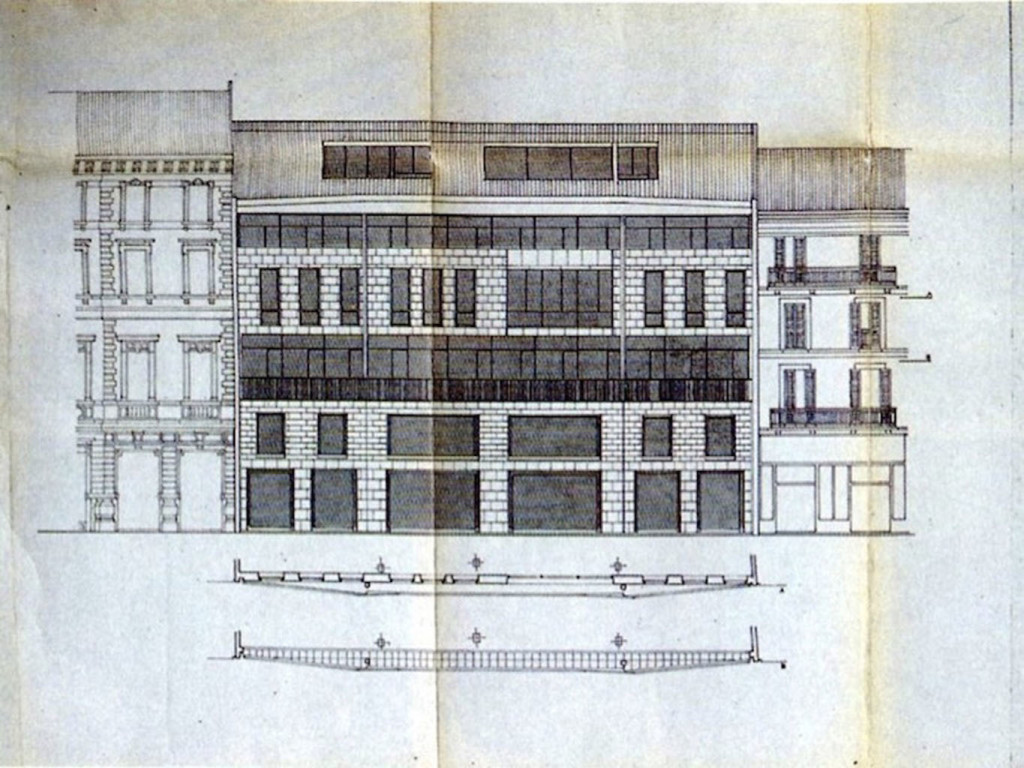 Villa Necchi Campiglio, the Boschi di Stefano foundation, Fontana’s balustrade: all emblems of a city that upheld art (considered it a tool to improve society), despite the problems of the immediate aftermath of the war. «A lost paradise?» I ask. «Not entirely,» replied Locatelli. «In the union between architecture, design and art, Milan has strong roots; perhaps they had dwindled in time, but I think that today they are getting stronger.»

Locatelli himself plays an important role in this rebirth today thanks to the space he designed in the San Paolo Converso church, in the central Piazza Sant’Eufemia. It is evocative, decorated with a marvelous cycle of baroque frescoes. Today it is dedicated to art, but it has often shed its skin: in ancient times it was the seat of a monastery, then it became a church, and when it was deconsecrated it became a warehouse.

During the last century, it was also an engraving room. For example, it was home to the record label “La voce del Padrone” and then that of Giacomo Mazzini, father of Mina. Finally, San Paolo Converso became the headquarters of the Locatelli design studio. «We had our offices there until a few months ago. Now we have decided to dedicate the entire space to the creativity of artists and industrial designers», he explains to me. 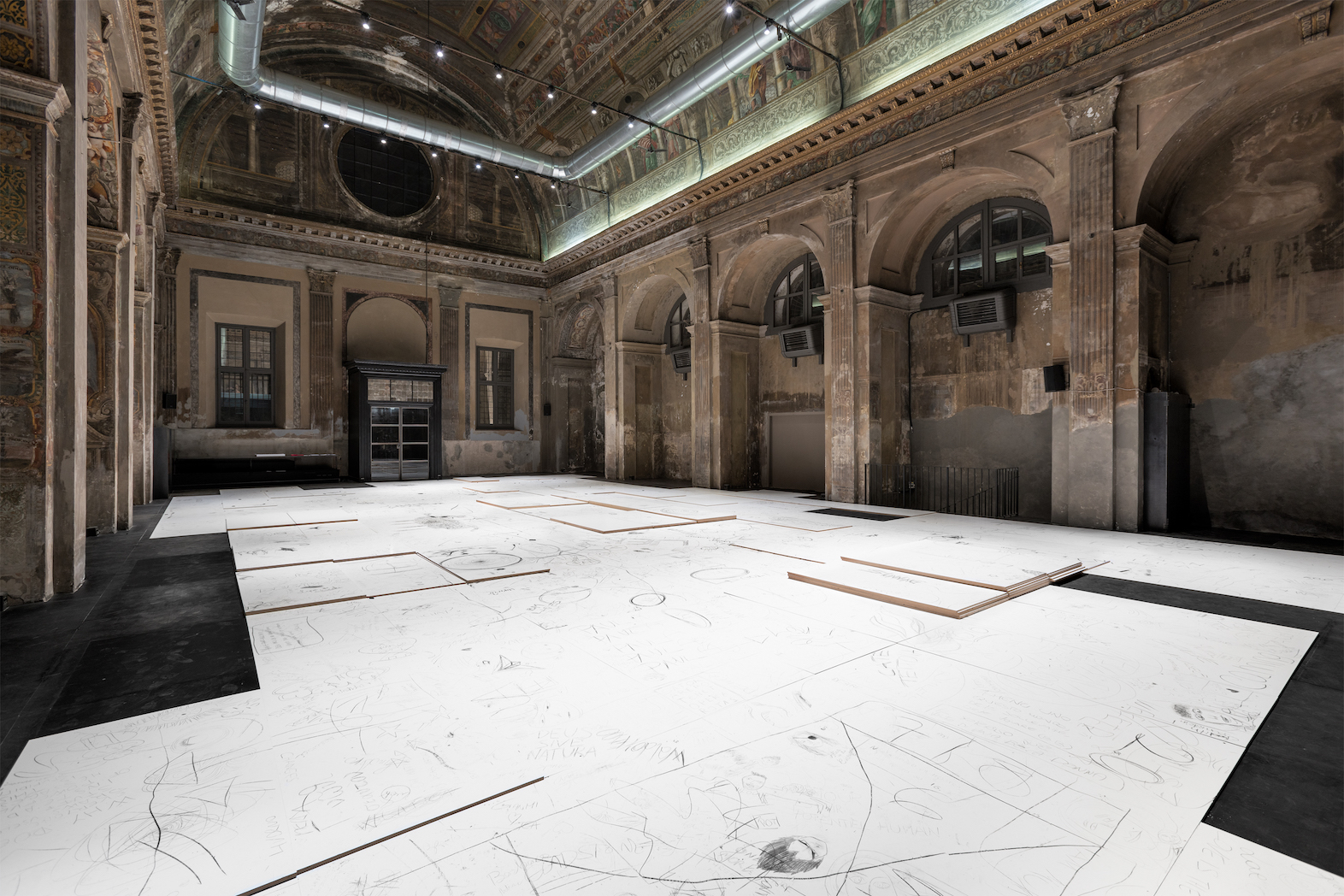 «The Converso space is a place dedicated to architecture, art and design for creatives who have something to offer.» It was once transformed into a tennis court, during the American Asad Raza’s solo exhibition: urging people to interact with one another and with the surrounding environment, the resulting experience was somehow memorable and enlightening. 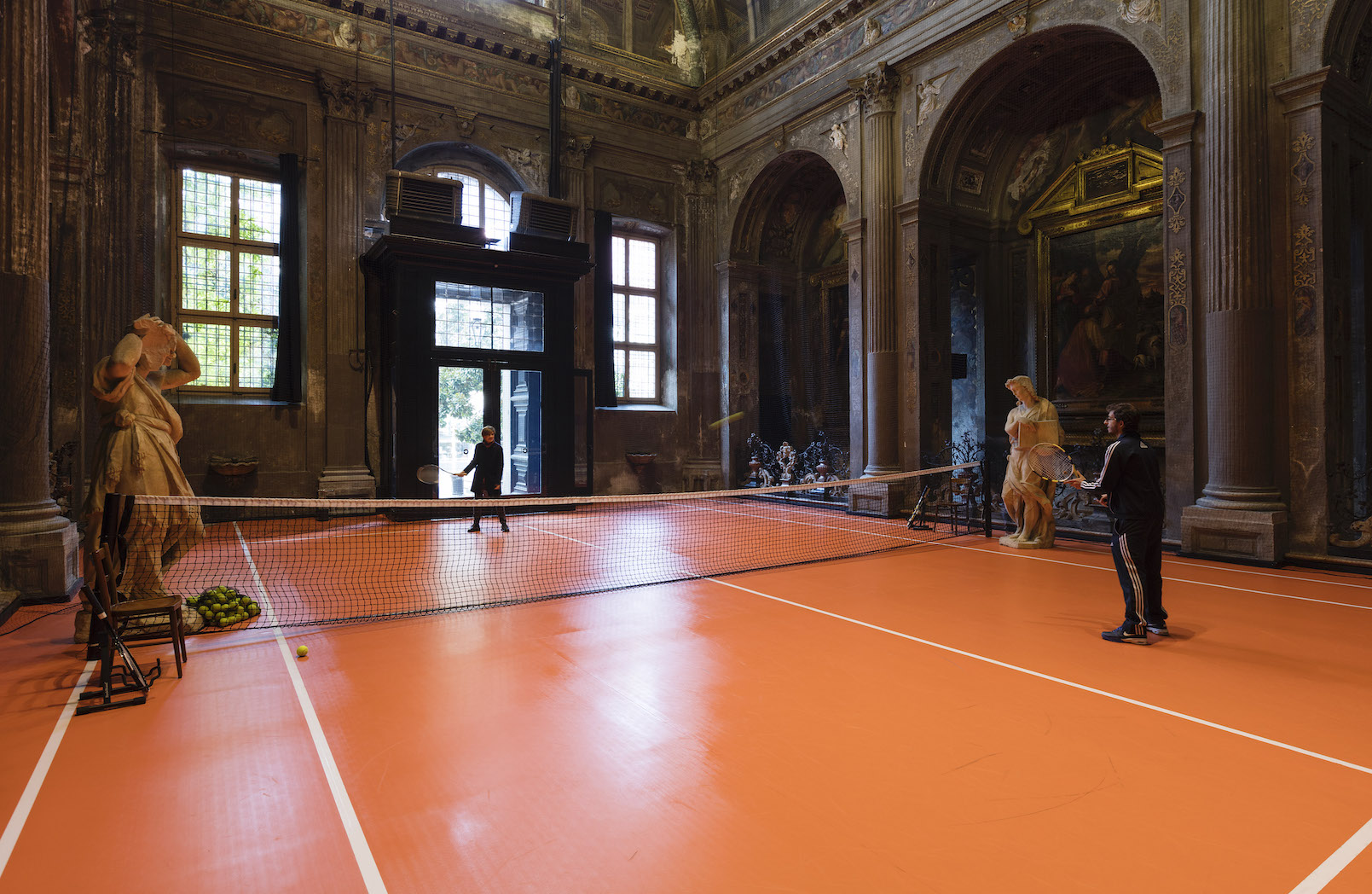 What about the next exhibitions? «From 23 January 2020 there will be an exhibition by the British artist Michael Dean; and then again an art and design exhibition during the Salone del Mobile,» he anticipates. «But other projects will follow. We are open to evaluating many, we are curious to discover talents from all over the world, and we are proud to show them here, at Converso, in Milan».

For the pictures thanks to osvaldoborsani.com and Locatelli Partners.

He is one of the most beloved ambassadors of the “Tuscan flair”, but that’s not all: through his movies – almost all of which have so far been set in Tuscany – Leonardo Pieraccioni is an unstoppable promoter of the beauties of his region – which also happens to be mine. For the anniversary of […]