Being well-known as travelers, eaters, and drivers, Italians were the geniuses behind Autogrill. Today Autogrill is an industrial giant, but its history began long ago, thanks to one man’s intuition.

In 1947, Mario Pavesi, founder of the Italian food company of the same name, needed to promote his new Pavesini biscuit so he opened a little cafè along the motorway, beside his factory. Since then, the Italian way of travel and eating has changed; this model spread to influence travelers all over the world.

As previously mentioned, the first cafè opened along the Torino-Milano road, near the city of Novara. It was a little shop where people could relax for a few minutes during a long road trip, drinking coffee and tasting some new products by Pavesi, like the new Pavesini.

In 1950 ― inspired by the American Grill-rooms ― Pavesi evolved his cafè to become a place where drivers could have a light and nourishing meal, something comparable to homemade panini.

“The little stand got bigger, more comfortable, and people started calling it ‘Autogrill’.”

Motorways were built quickly in northern Italy, where most of the cars were concentrated, thanks to the commitment of ENI (petrol), FIAT (cars), Pirelli (tires) and Italcementi (concrete). However, none of the companies planned out services for the users of their new motorways. They were all instead focused on infrastructure.

To fill this gap, Mario Pavesi and Angelo Motta (founder of the food company Motta), conceived Autogrill as the advertisement of the future and, at the same time, a modern restaurant. 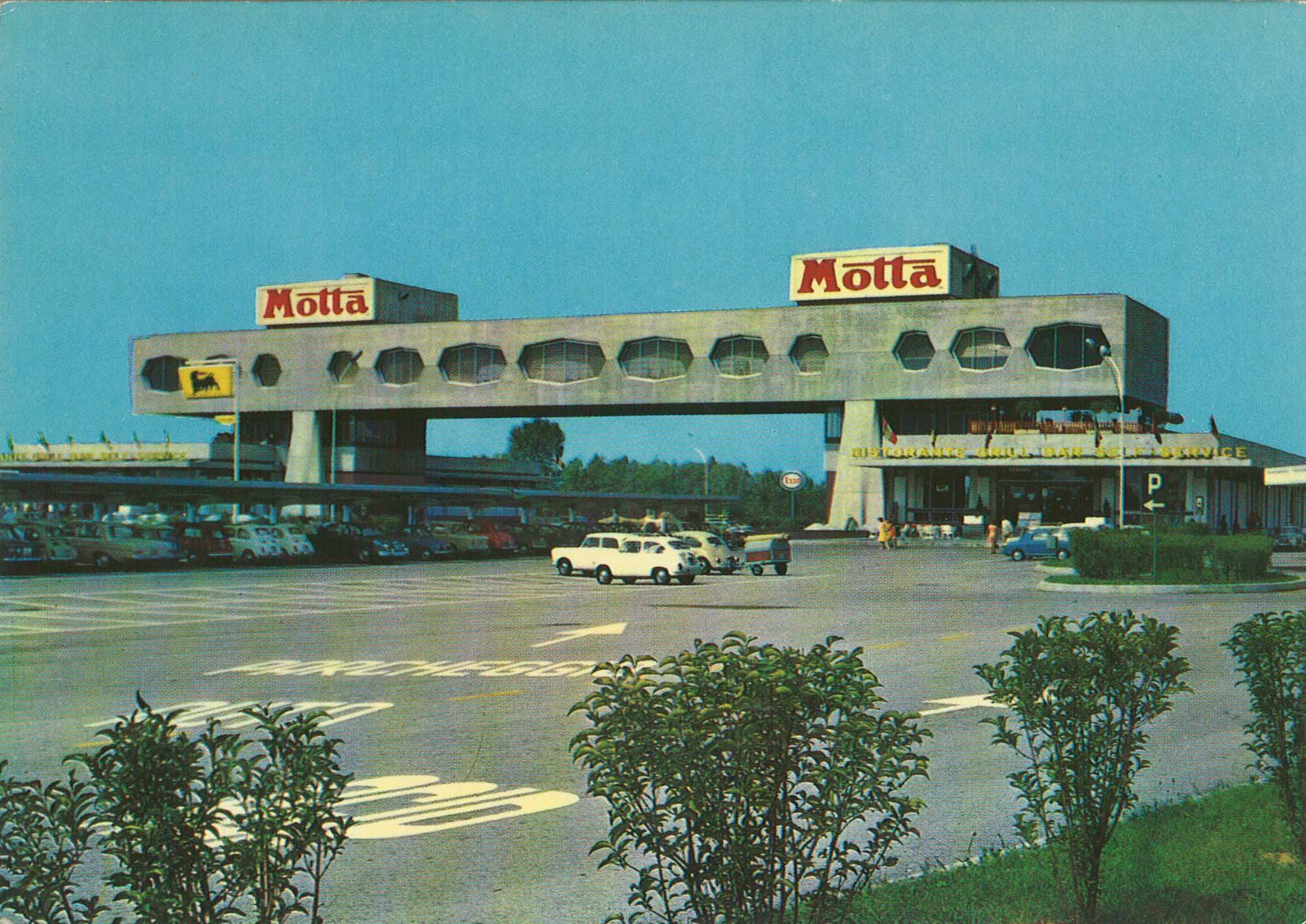 The owners of the Italian motorways totally ignored commercial businesses and rented these areas on cheap leases. Between the late 1950s and 60s, Enrico Mattei noticed the success of Autogrill and quickly made a joint-venture with the food company Alemagna to open many Autobars next to his AGIP petrol stations.

After AGIP created Alemagna, new agreements were born between petrol companies and food ones: Pavesi with Esso, and Motta with BP. Each of them built its temples on the motorways, emblems of power and innovation.

“Between 1959 and 1960, Italians witnessed the first ‘bridge Autogrill’ that we can still find today along the A1.”

From 1960 through 1970 the business of food servicing on the Italian motorways gained the interest of more and more investors: the so-called “design experience” at the time was just user research.

Italians wanted to taste the freedom of traveling by car, buying new products that they had only seen on TV, or trying new services with the rising trend of supermarkets. 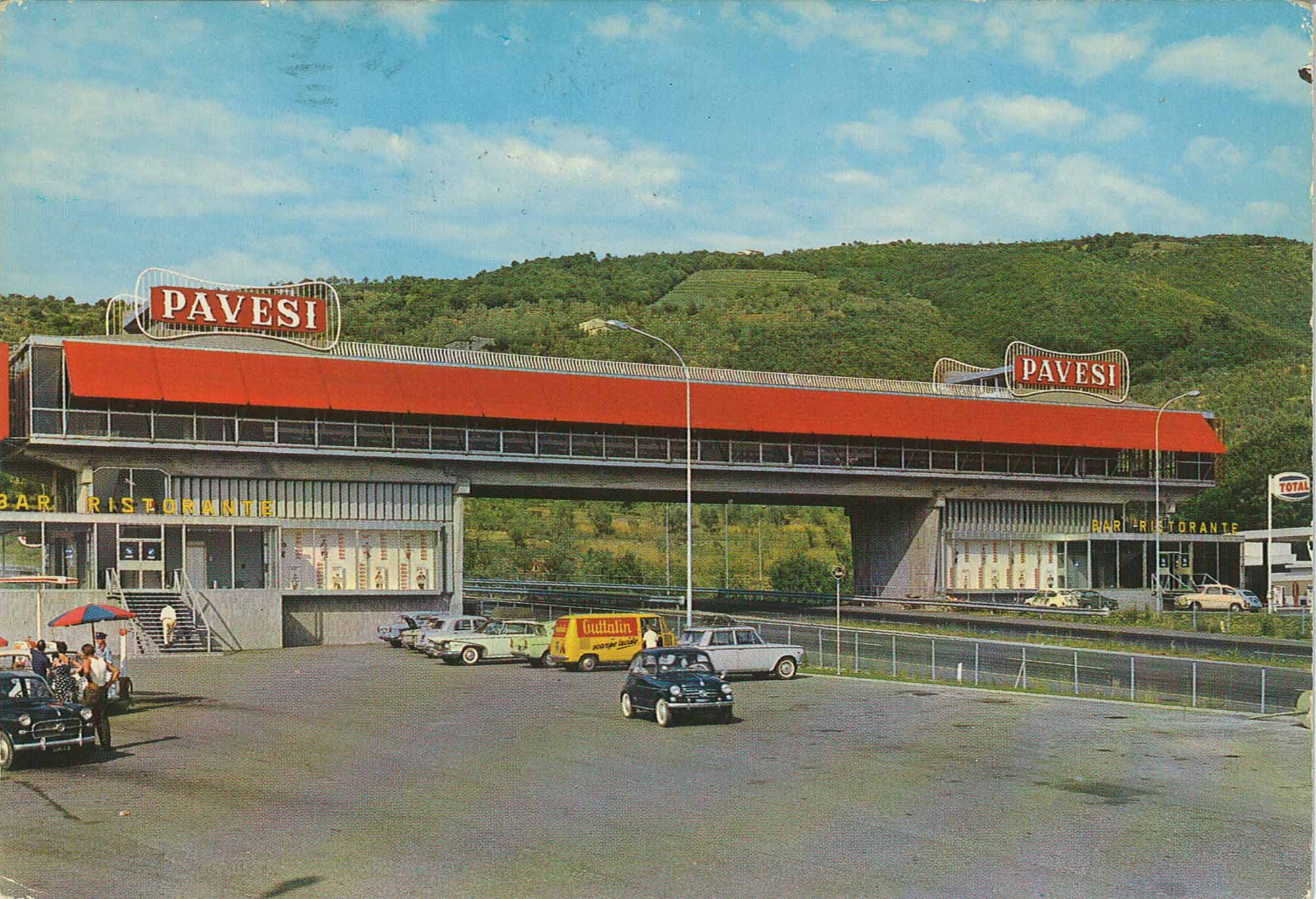 Once the founders of the big three food companies one by one disappeared, the asset of their Autogrill deeply changed. Pavesi was the first company to be absorbed by Montedison, while Motta and Alemagna were gradually acquired by SME. The years of the 1970s marked the revolution of Autogrill.

Incorporations, takeovers, and private and public interests, changed the three companies from competitors to partners of the same group, under the government controlled company IRI. In a few years, the crisis overtook the genuine motivation of the three old founders, causing some branches of their companies to no longer be profitable.

The 28th of February 1977 the new company Autogrill Spa was founded: it was the first national food servicing company, and eventually, one of the largest in Europe. The time, logistics, and strategy involved rose above problems of inner fights and unskilled management. 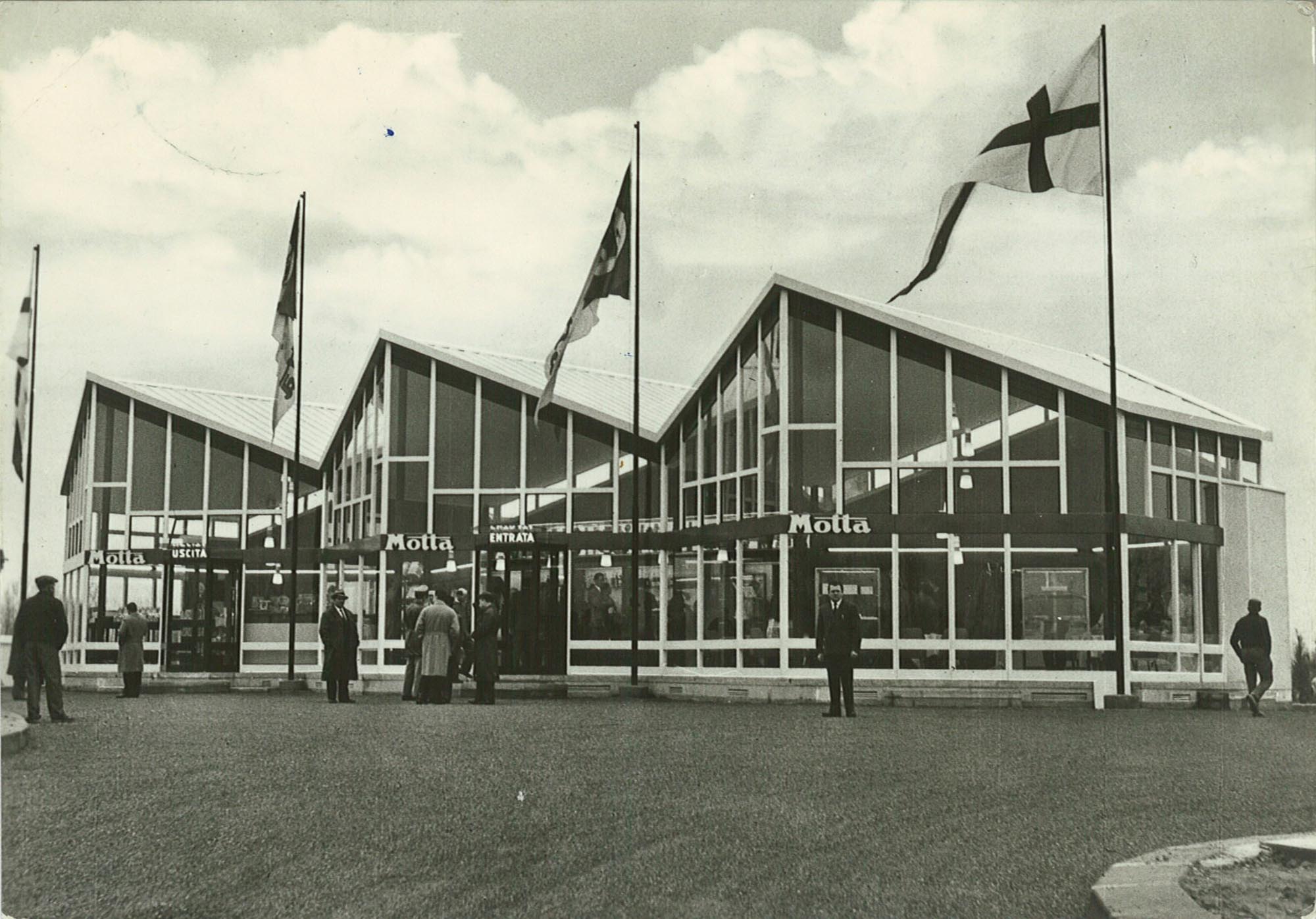 In the meantime, Italy was changing from post-industrial to post-modern, with new habits, trends, and goals that Autogrill interpreted through a well-structured rearrangement of the food servicing for the “motorway continent”.

The crisis of petrol and the general impasse of Italy slowed the growth of Autogrill Spa. The company took off in the early 80’s thanks to the extension of the motorway network, together with the growth of the GDP and the victory of Italy at the soccer world championship ― a rebirth of Italians.

During the 90s Autogrill expanded their ventures to other means of transport: stations and airports in Italy and across Europe. This began the newest chapter of the company, with its acquisition in 1995 by a new company with ties to the Benetton family (fashion enterprise owners). 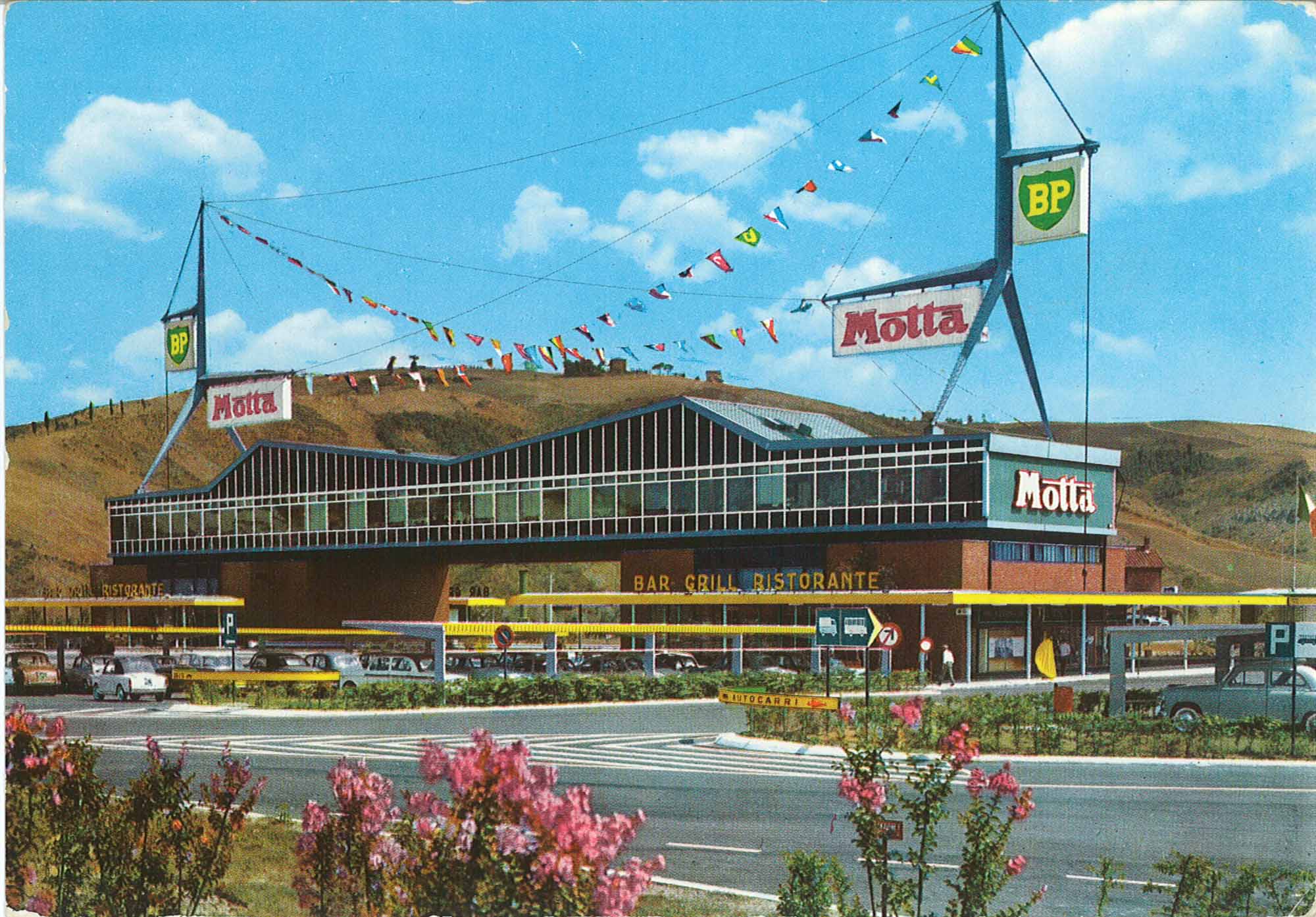 Nowadays, Autogrill is a successful phenomenon that merges mobility and food. 70 years ago, the vision of our Italian businessmen was not foreseen to be the market force that it is today.

“The foreigners consider Autogrill as a typical Italian spot. The main goal is to design a model and continue it to the future.”

Not only focusing on fast and delicious food, Autogrill also has new sustainable solutions for its buildings that use less, and renewable, energy and a vision of future mobility. Opened in 1960, Villoresi Est is a model of the future of Autogrill designed by Total Tool Studio. Situated in front of the iconic Villoresi Ovest, it has a roof made of grass, parking for electric vehicles, spaces for different users, and both fast and slow restaurants.

On April 7th, 2017, Cantagallo Autogrill (close to Bologna) was the second place where the new Bistrot concept opened: it is a new brand of the company that is focused on traditional Italian food for travelers.

From that motorway in Piemonte region to the airports all over the world, Autogrill shaped in a mere 70 years its mission of exporting the Italian way of life: traveling through evolution and tradition.