Eicma 2019 is now over: a week for motorcycles and their brands to be the main characters. Here we want to tell you about one of the greatest Italian brands.

From bicycle-manufacturer to track records

Born as a small bicycle factory, Aprilia discovered the charm of engines and speed in the Sixties. Since 2004 it has been part of the Piaggio Group, now stretching beyond the Italian borders; yet people here still speak the local Venetian dialect.

Every weekend, all over the world, Aprilia motorcycles take to the track in international and local circuits, keeping the honor of Italian and European motorcycling high, satiating the desire for bike races and grooming young talents who shall one day debut in competitions.

Founded by Alberto Beggio (he chose the name Aprilia because he was fascinated by the Lancia Aprilia, a very beautiful and innovative car launched on the market in 1937), by the early Seventies the company was run by his son Ivano, who transformed the small artisanal company into an international group that achieved commercial and sporting successes. 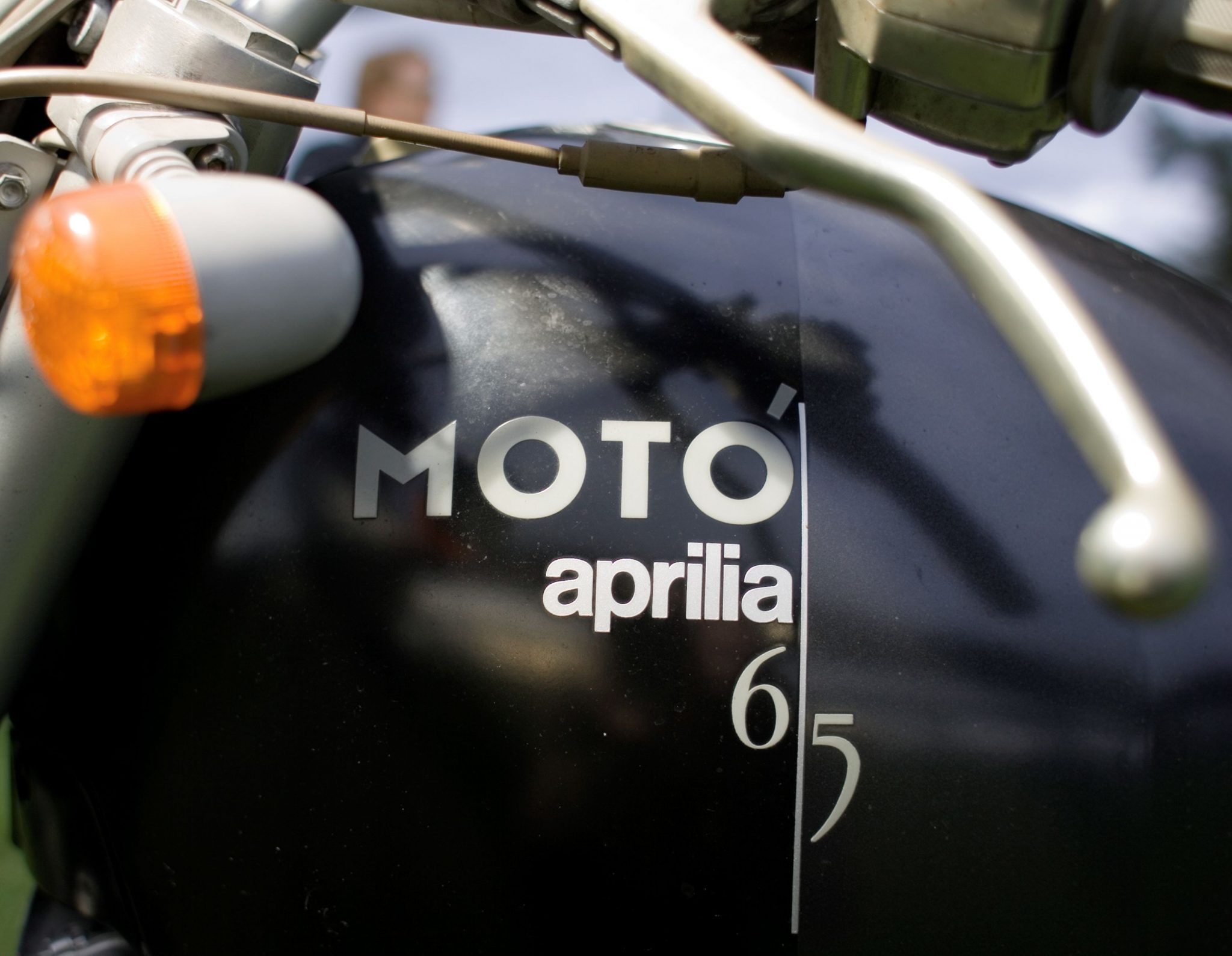 The production of the first mopeds, such as the John John, the Daniela, the Amico and the Colibrì, at the end of the Sixties, served to obtain the necessary means to start competing. The first regular motorbikes to be sold to customers came from competing vehicles. Passionate about cross racing, the young Ivano dreamed of becoming the world champion in this specialty and managed to expand the small family business very quickly. Regular engines would later be used to equip their sophisticated street sportscars.

From then on, Aprilia’s ascent in cross racing was unstoppable (with Ivan Alborghetti and Corrado Maddii). But Ivano Beggio was aware that only by producing road motorcycles (and above all taking part in the MotoGP) would his company make the big leap. The debut came on 23 March 1985 in Kyalami, South Africa: Loris Reggiani finishes 12th. During the rest of the championship the bike turned out to be really good, so much so that Reggiani achieved his first podium (third place) in Rijeka and got another one in Imola, Italy.

The first victory came on 30 August 1987 in Misano, when Reggiani brought his AF1 250 to his first success in a GP. 54 more victories would ensue: nobody wanted to stop there.

At Eicma there were especially high expectations for Aprilia RS 660: a motorcycle that also marks the beginning of a new era for Aprilia: around a completely revolutionized technical base, defined by the 660 parallel twin, a generation of light and high-performance motorcycles with a sophisticated design was born. This marked the return to medium-sized cars, supported by the electronics and technology of the Aprilia Racing racing department, to rediscover the pleasure of everyday driving.

The first born of this new generation was Aprilia RS 660, which introduced a different concept of sportiness: premium technical content and high performances, but not too high. In short, a sports bike suitable for all motorcyclists, which does not require any special experience or ability. The recipe behind the project is contained in the excellent weight/power ratio: 169 kg per 100 hp represent the perfect equation for fun on the road. Even technically, the RS 660 is a unique proposal of its kind: new frame and swingarm in light aluminum, new twin-cylinder parallel engine with great performance accessible to all.

The races in the dna

Speed ​​and racing are part of this brand’s DNA. With 294 Grand Prix races won in World Championships, Aprilia holds the record of victories among European manufacturers in the history of the maximum motorcycling competition. And in the SBK world championship, 41 victories and 89 podiums. In total, there are 54 world titles on the list: 38 in the MotoGP (plus 20 and 18 in the 125 and 250 categories respectively), 7 in the Superbike championship (two drivers and constructors in 2010, 2012 and 2014, manufacturers in 2013) and 9 in Off -Road races (7 in the Supermoto and 2 in the Trial).

A challenge that started quietly in Veneto, among industrial buildings and small houses with gardens. The Aprilia house is in Noale, about thirty kilometers from Venice. To welcome those arriving there is a long and colorful row of bikes that have already made history. They are the ones on which all the best Italian racers of the last generations and even some foreigners have triumphed. From Valentino Rossi to Max Biaggi, from Loris Capirossi to Jorge Lorenzo. There is also the white 58 on which Marco Simoncelli used to race.

Now, before saying goodbye: have you ever watched the Scooter Aprilia SR TV commercial from the 90s starring Valentino Rossi? Here it is – just in case!