Milan, 1960s. For thirty-year-olds, this can be a mystery. For me, a puzzle comprising a number of pieces: the economic boom and immigration, 1968 and student rallies, the first miniskirts and, of course, music. I have never followed a “unitary” path in learning about this decade, because I (mistakenly) thought I already knew all I had to know. The “1960s Milan” exhibition at Palazzo Morando, which will end on 7 February, made me change my mind. 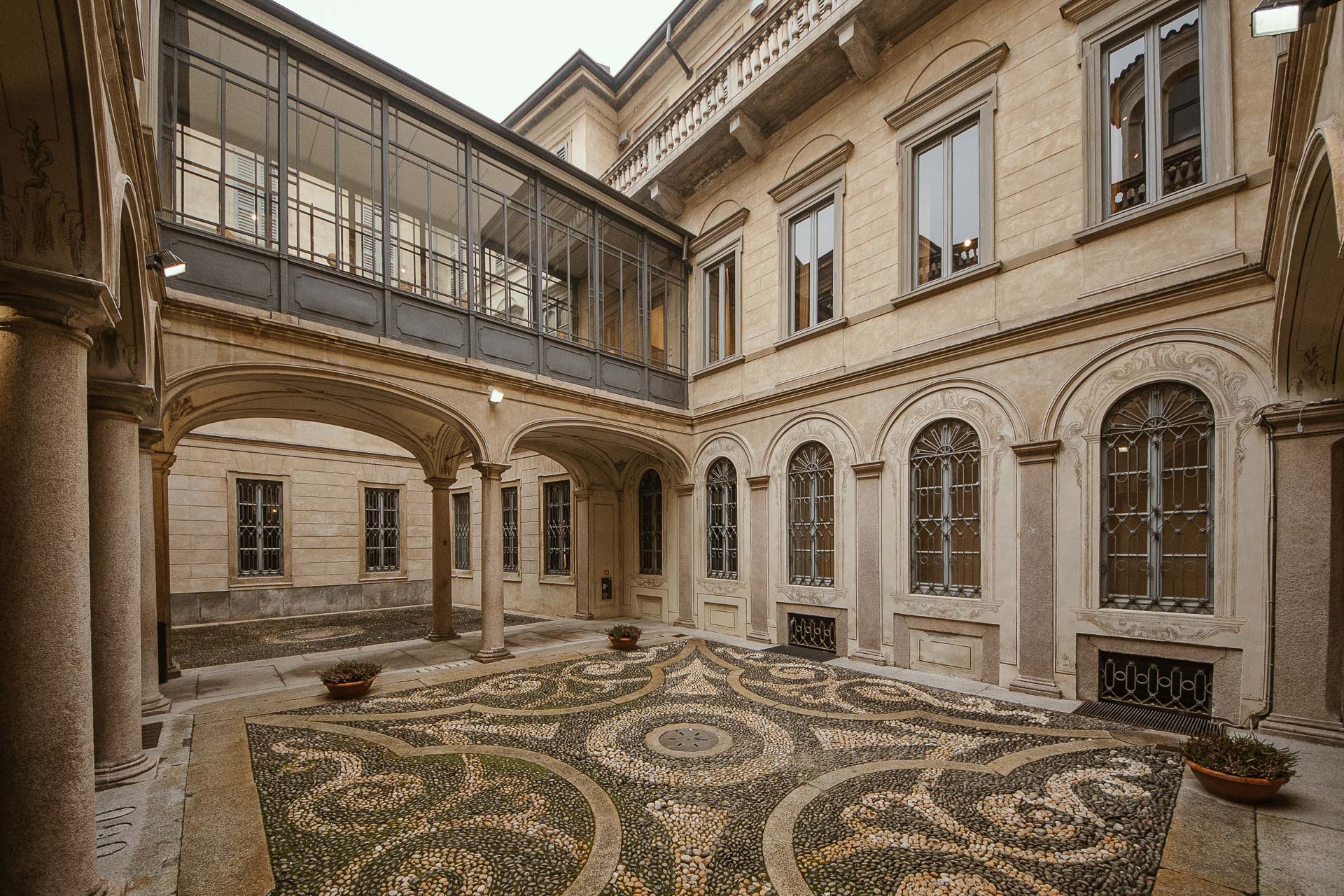 Photographs, articles and objects from the Sixties, a visual journey in eight parts: the building boom, its consequences in Milan, the subway, design, theater and publishing, music, work, the massacre in Piazza Fontana. Perspectives – actual memories for some – through which we observe and describe a transforming city, so distant and at times, photo after photo, so close.

The sand mountains in Darsena

Archive photos – more than a hundred, from private archives and foundations – allowed me to travel visually through many of the city’s neighbourhoods; they were obviously different, but above all they were about to change: the Pirelli skyscraper in construction, the parking space in Piazza Mercanti, traffic in Piazza Duomo and the slide in Piazza Castello, where the first subway car entered. These are dynamic photographs, as were those years.

My father comes to mind: talking about the exhibition, he told me that as a child he played on sand mounds in the Darsena (Milan’s arsenal), which at the time was a real crossroads of boats that, traveling along the Naviglio Grande, brought gravel from the Ticino (a river near Milan). There was also the economic boom: the (re) construction and the consequent explosion of the building industry, the high employment rate, the demand for manpower. “Those were years when people were optimistic” my father tells me, “there was work, it was a period of strong immigration to Milan: companies like Magneti Marelli, Falck, and Pirelli attracted people from all over Italy”. Here are pictures of trains heading for the city, full of people which the exhibition remembers and tells about, and which we, perhaps, sometimes forget.

The journey raptured me as I didn’t think it could; it continues with the great design revolution. Perfectly described by Vico Magistretti, it is confined to a wall: “Italian design was born here due to the fact that in Italy (and in Italy alone) we met the producers”. 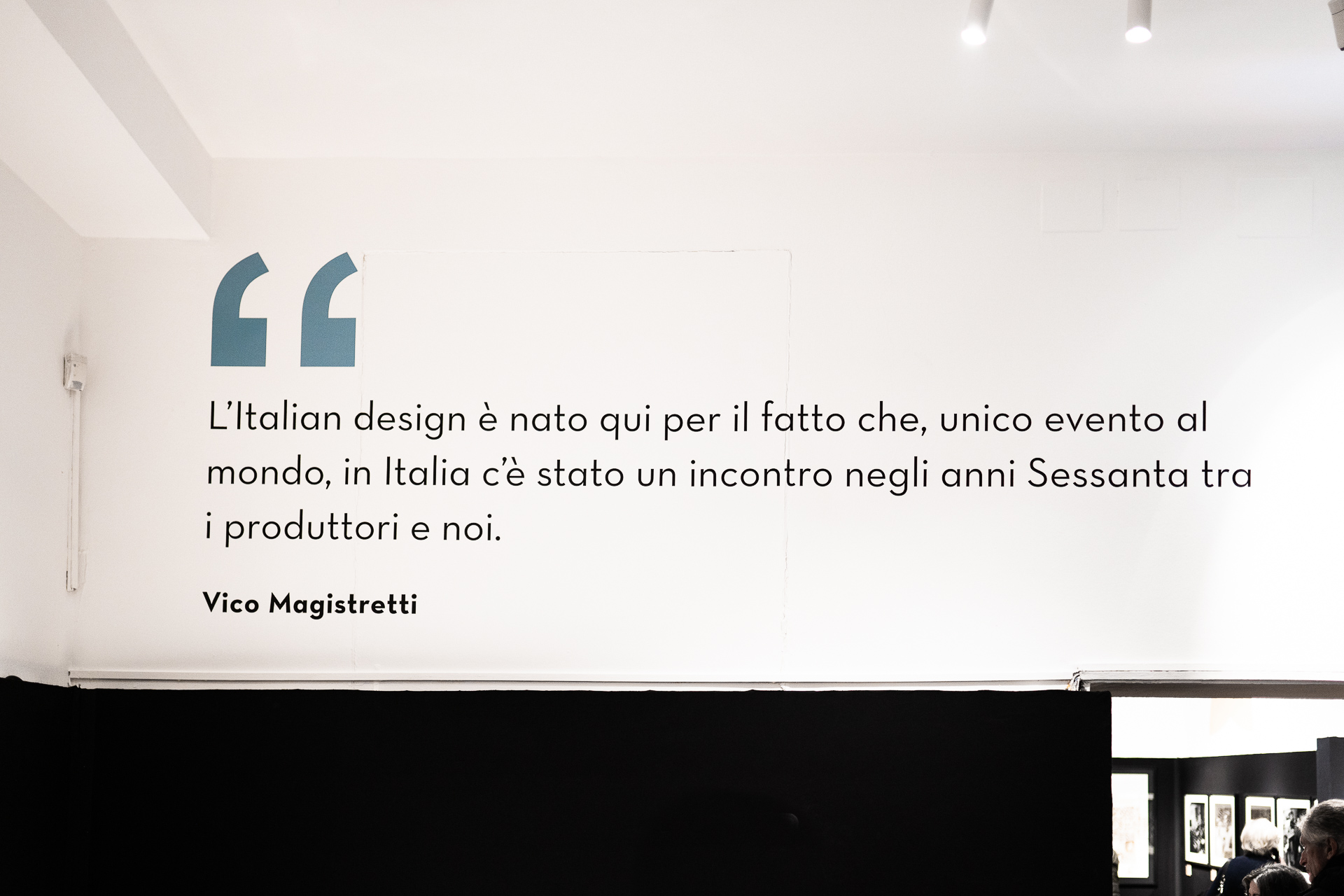 These “we” were Enzo Mari, Gino Colombini, Gio Ponti, Anna Castelli Ferrieri, Pier Giacomo and Achille Castiglioni and Ettore Sotsass and many more. 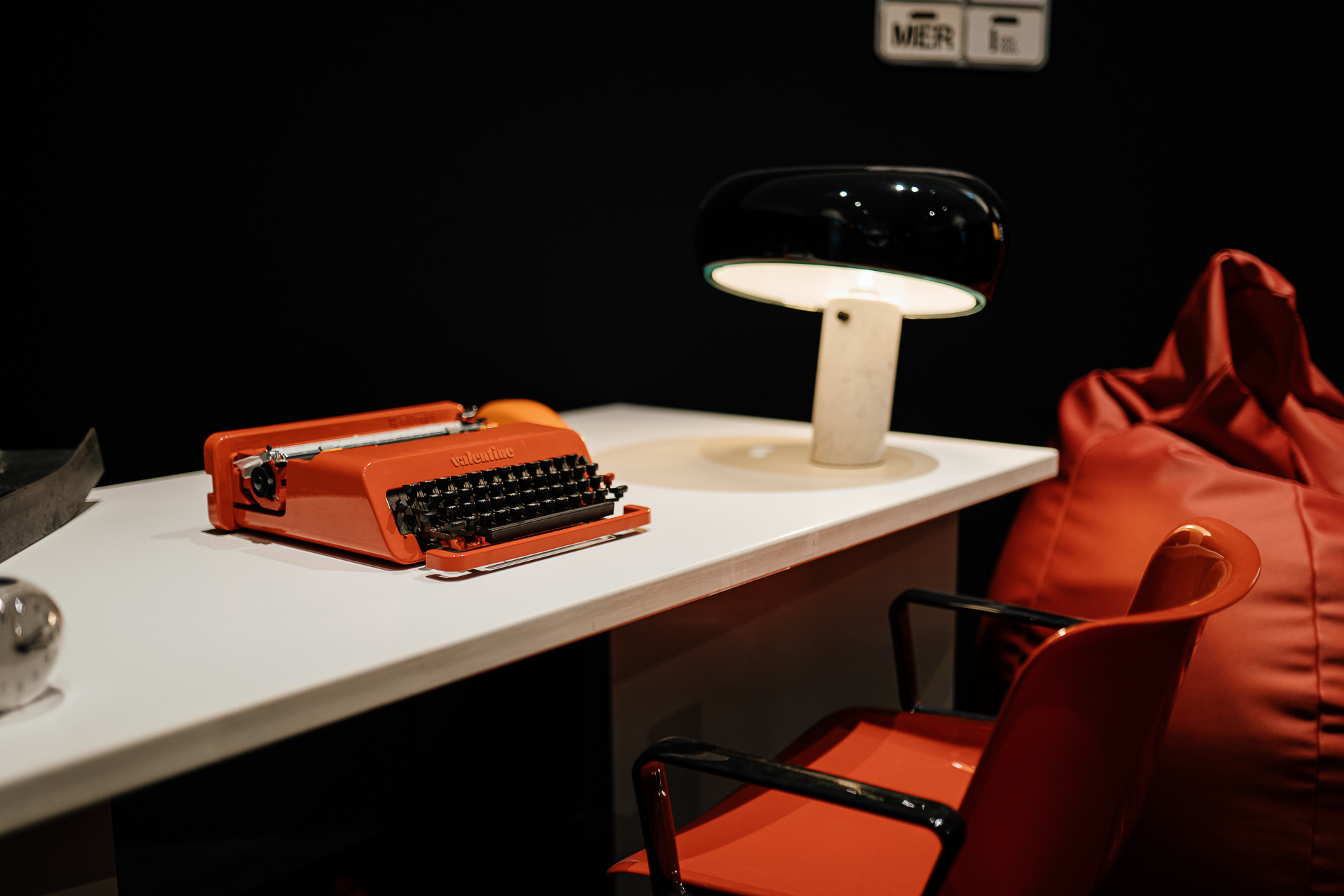 It is precisely from their great creations (such as Artemide, Kartell, Olivetti and Flos) that in the 1960s architecture was transformed into practical objects, entering the Italians homes. I discovered that the first Salone del Mobile dates back to these years, and precisely to 1961: 328 stands and 12,000 visitors, compared to 8 million in 2019. Here is what Milan was becoming.

Between Twist and Shout and sold out theaters

The exhibition continues, and I find myself in a story that I wish would never end: through music I find myself in 1965 at the first Beatles concert in Italy, at Vigorelli Velodrome, and at that of the Rolling Stones at Palalido, two years later. I see the first cover of Panorama, published in 1962 and dedicated to Japan, with the first issue of the newspaper Sole24Ore, published in 1965. I discovered that in 1963, for the premiere of Strehler’s staging of Brecht’s “Life of Galileo” at the Piccolo teatro, they counted as many as 56 performances, with many displeased they never got to see it. 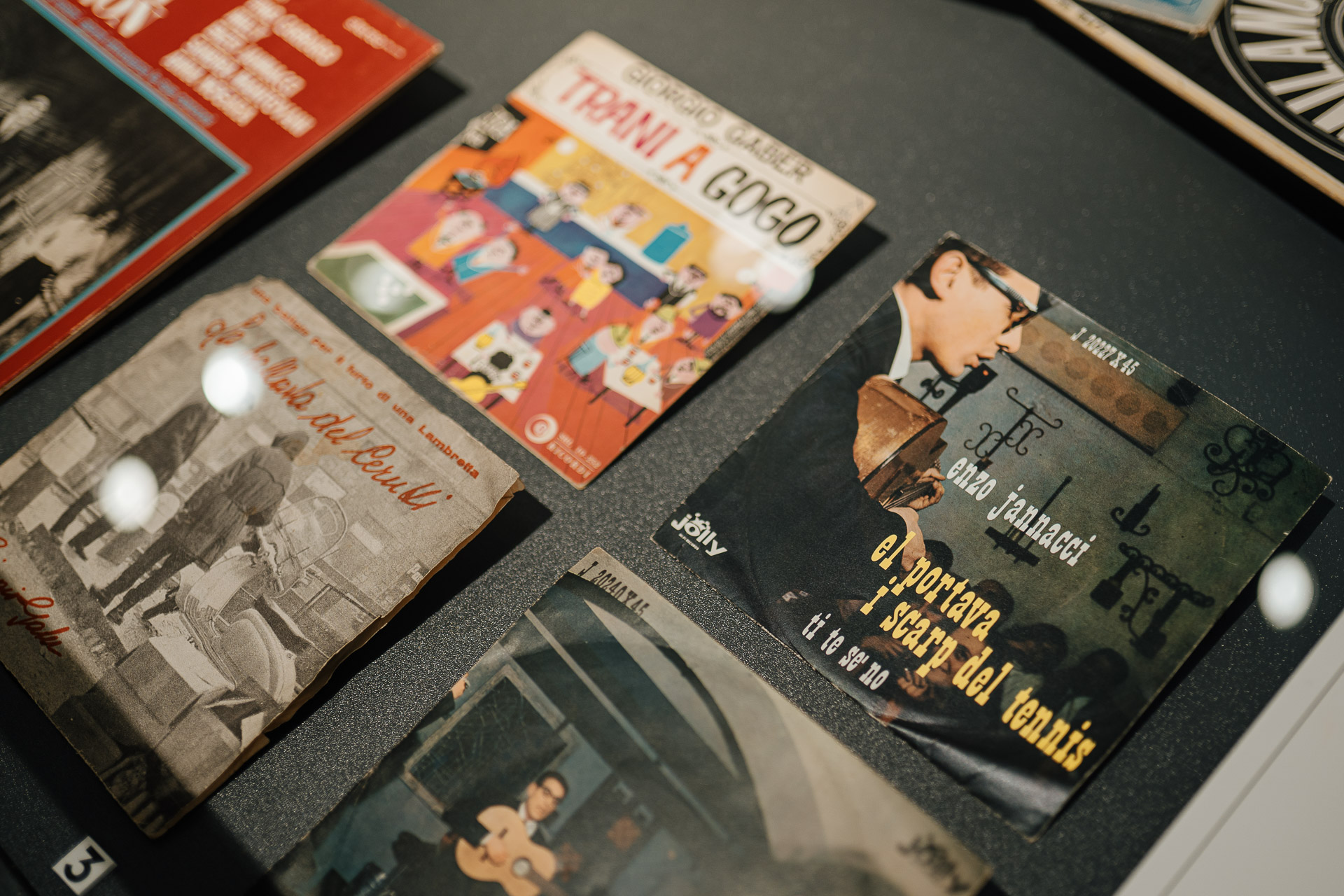 These were fast and at times contradictory years, during which the stage was dominated exclusively by the Piccolo: in these years they reached 14,000 season tickets. At the same time, the Living Theater emerged, with its desecrating sketches and shows the right considered “scandalous”. But those years, so intense and euphoric, were about to end.

The loss of innocence

It’s the last step of the exhibition, the darkest and, at the same time, the most powerful one: the end-of-the-decade section, with student demonstrations and occupations, but above all with the massacre in Piazza Fontana on 12 December 1969: here is the loss of innocence. 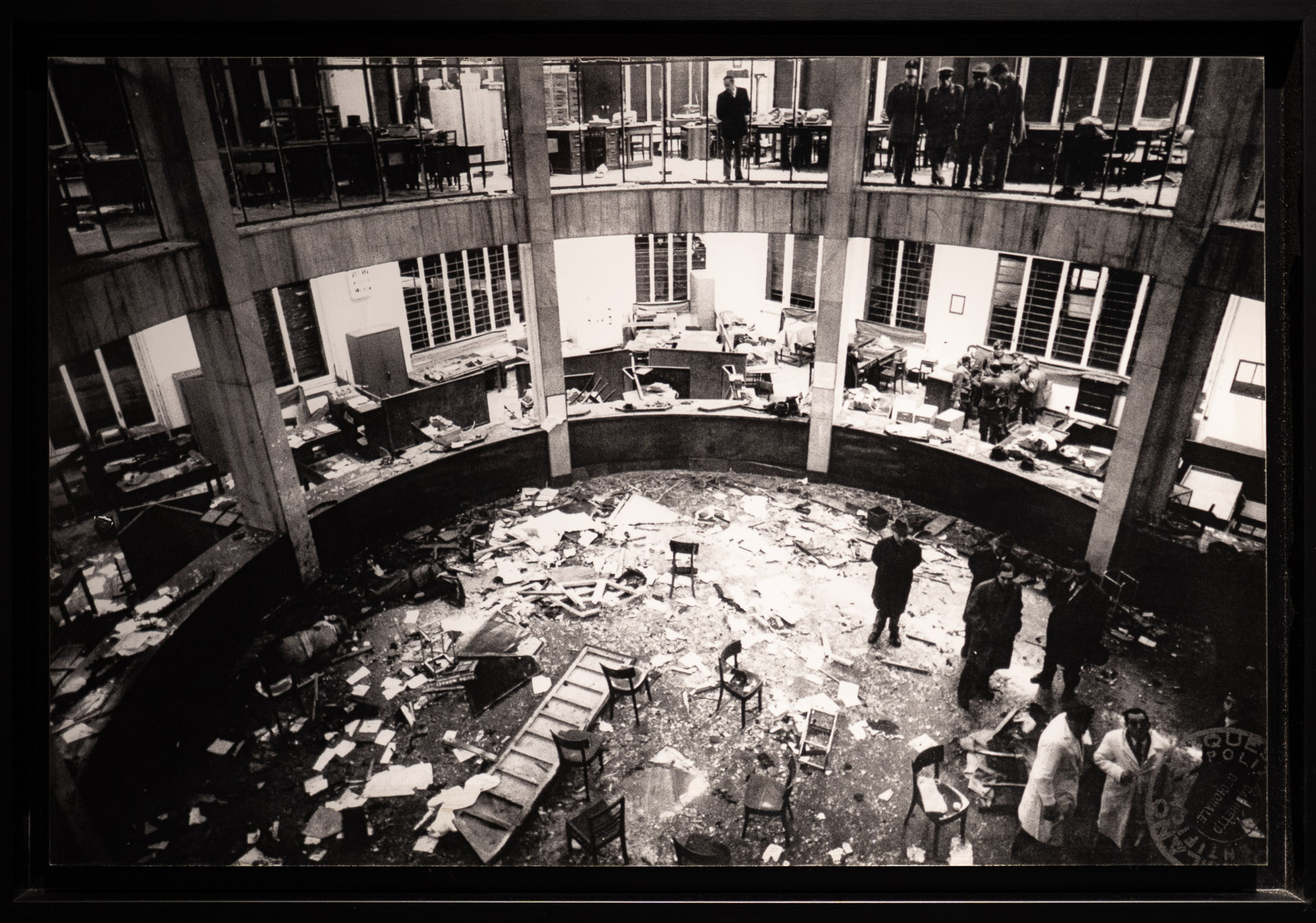 The climate in Milan had already worsened a few years earlier, when in 1966 the Parini High School student newspaper (called, “La zanzara”, “The mosquito”) had published a survey on sexual issues and women’s work. I read an original copy, which said: “We want everyone to be free to do what they want as long as this does not harm the freedom of others. So absolute sexual freedom and a radical change in mentality […]. It would be necessary to introduce sex education also in middle schools, for sexual problems not to be taboo […]. Religion in the sexual field is a harbinger of guilty consciences”. 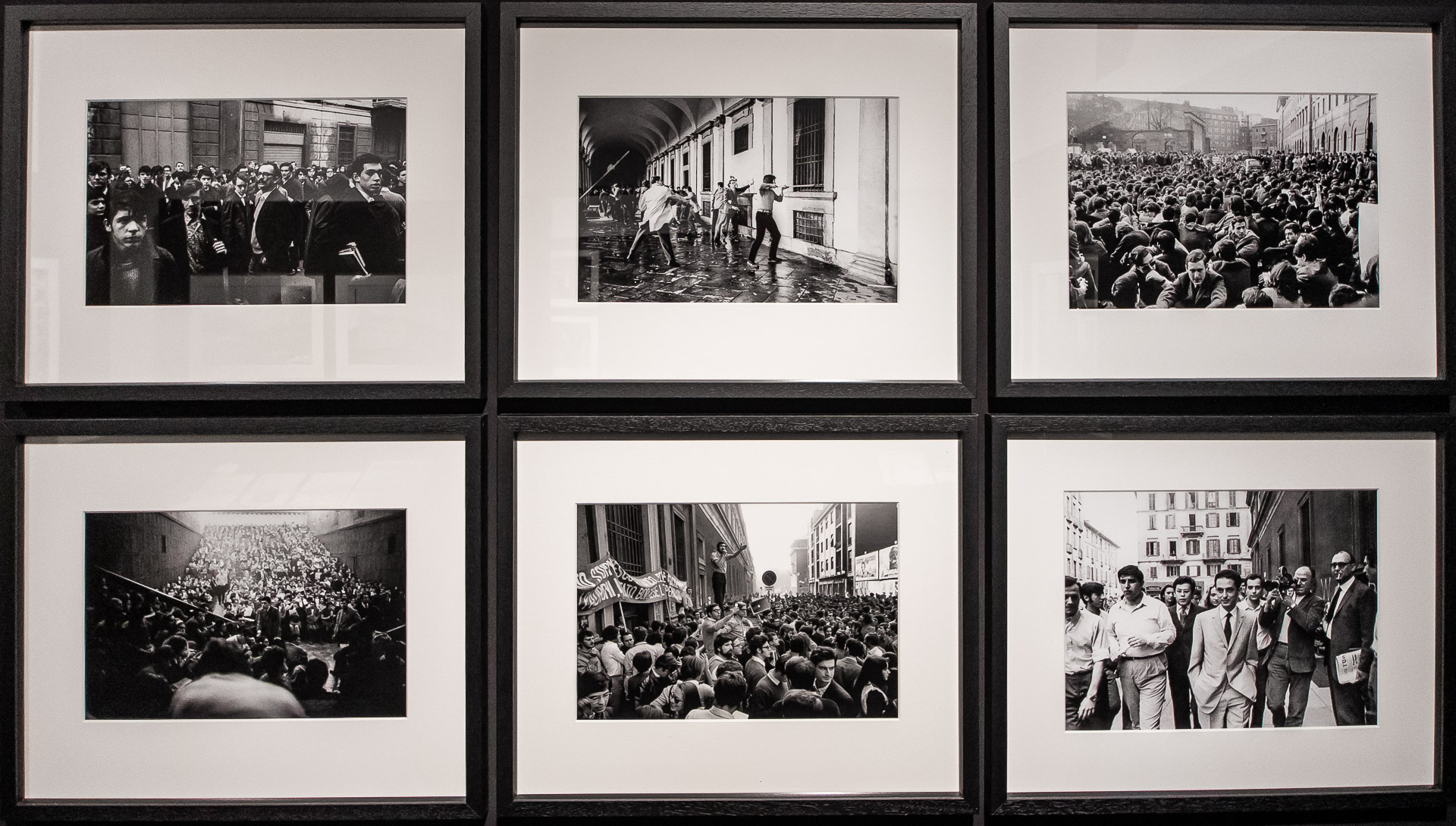 It was the beginning of the end: the editors and the school principal were tried, the following year students occupied the Università cattolica and in 1968 they occupied the Statale University, with rows between occupiers and neo-fascists. The climate in town became tense, as is clear in these black and white photos: thousands of students demonstrating, Mario Capanna holding rallies, the Student Movement, the first bombs, the massacre that marked an era. The photos of that 12 December suck you into the Banca Nazionale dell’Agricoltura, amid the cracks and chasms of the explosion. These are powerful images, which belong to the past only because they are in black and white. I look up and read a sentence that says exactly what I think better than anything: “I don’t know how, but I am sure that with the massacre which took place a few days ago, the horrendous newspapers’ chorusing and the murder of Pinelli, we truly have reached the end of an age which had started at the beginning of the decade”, written by the poet and essayist Franco Fortini.

After the exhibition, after the photos and after those days, it belongs to everyone.

For pictures, thanks to our Giovanni Genzini.

Is there any charm in ‘mafia’ style?

We don’t ever take ourselves too seriously. The Godfather and The Sopranos are to cinema and television as Homer is to myth. Although in different years and contexts, these two titles have made the gangster movie genre bleed ― outlining the epic criminal story. Stories of the rise and fall of the seductive and grotesque […]

Gianni is wandering back and forth behind the scenes. It’s a hot summer night and the room is full of people: someone is waiting at the bar, someone is entering the room holding someone else’s hand, someone is sipping his favorite cocktail relaxed on a black comfy sofa. On stage, a tall boy from Cremona […]