Behind the scenes of Germany-Italy 2006 with Fabio Caressa

Fabio Caressa has revolutionized the way of narrating a soccer game. Not a simple commentary, but a narration of the emotions the match conveys.

«600 thousand Italians live in Germany: some have always lived here, and have never denied their land: our players understood what mattered to them today, they read it in their eyes these days when they were embraced. Now there is one more thing to fight for, especially for those who live here. Today being Italian matters more. From the Westfalenstadion in Dortmund, Italy-Germany: a rendezvous with history.»
Introduction commentary by Fabio Caressa on 4 July 2006, Italy-Germany

Rhythm is perhaps one of its secrets, so much so that he has received criticism for being “too emphatic”. But first of all, words: the right ones, the good ones; his natural talent, that of being able to excite the viewer, making him the protagonist together with the twenty-two players on the field. Today we retrace with him one of his best commentaries, the semifinal of the 2006 World Cup in Germany, the match between the hosts and the Azzurri that saw Italy triumph in extra time just before time ran out, thanks to goals from Fabio Grosso and Alex Del Piero. 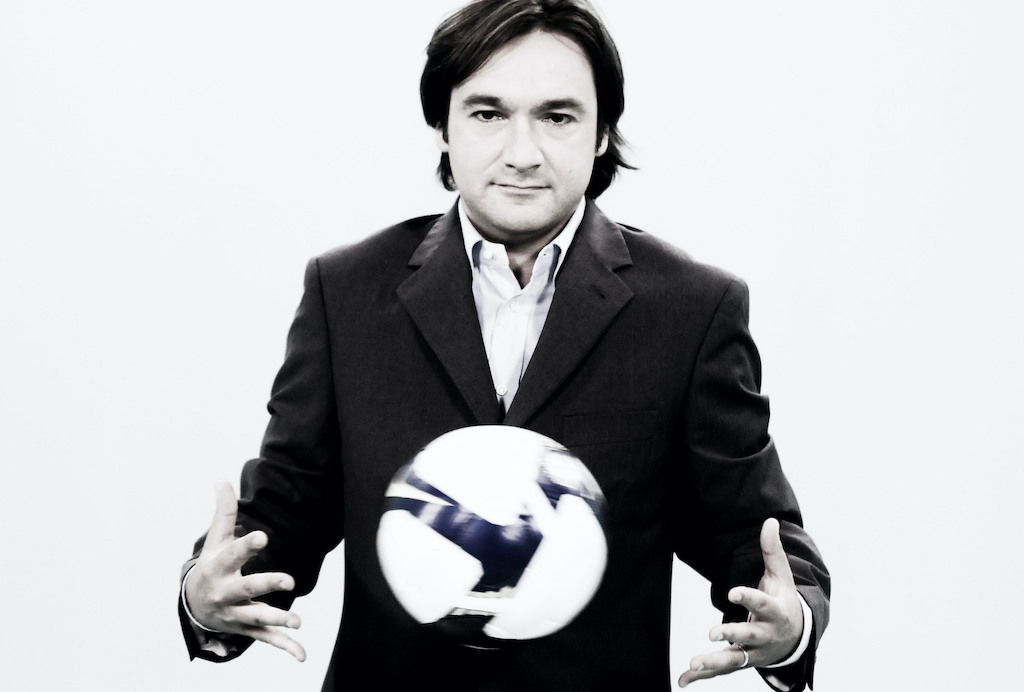 A year that marked a turning point in the world of commentary because of Caressa, thanks to his way of narrating games. I remember that it was the first World Cup broadcast by Sky and even the climate around the Azzurri was not the best, given the “Calciopoli” scandal that had shaken the whole football world.

But what is behind a commentary? What does a commentator’s “warm-up” hide? I ask myself, and then I ask him.

“Before the game I said to Beppe [Bergomi]: we’re going to win. And we did. We were very busy, live 24 hours a day: we each lost an average 5 kg. The rhythms were very intense, we basically lived at Casa Italia at the Duisburg stadium and we took turns with shifts, but generally we never left work.”.

It is normal to think about the fatigue of the athletes on the field, but how much do we think about those who impeccably narrate those games? I remember that throughout the World Cup, from the debut match against Ghana to the final on 9 July, Fabio opened the commentary with truly significant intros that made history and remained in everyone’s heart. “How did you prepare for this?”

“By hearing my own commentary, I understood that how I started was my weak point: I had tried to give a lot of numbers and statistics, but on television these tend to get lost. I wanted to find a way to get the viewer involved right away. I have always believed that people must feel like they are at the stadium; this requires more effort. It can certainly be a risk for commentators, because we get carried away with the same atmosphere we want to convey; but when the National team plays we are all on the same side, so at the World Cup all this was part of the game. Triggering a positive emotional response in the viewer is crucial. I only prepared the introductions, writing them personally. The rest of the commentary was always a consequence of my emotions in those moments.”.

How does it feel to keep millions of Italians glued to the TV?


“I commentated the inaugural match of the World Cup, which we had all been waiting for. When I arrived at the seat I literally kissed it: I remember very well that I cried with emotion before I started commentating. Inevitably I thought back to my beginnings, on local TV, and when you focus on the fact that you are commentating a World Cup game, you undoubtedly get emotional. Beppe always says that before Italy’s important matches “we had snakes in our bellies”. It’s so true. We lived it with great intensity: professionally, it was an important point in our careers. There was the awareness of conveying a great event to millions of people glued to the TV. Before the final on 9 July, my taxi left me two hundred meters away from the stadium: all the Italians were outside with banners sporting “We’re going to Berlin” [which Caressa had said after Del Piero’s 2-0 goal against Germany] and they embraced me affectionately. Some, like a real human shield, literally escorted me inside. There was a crazy enthusiasm and that was when I understood the true scope of what we were narrating”.

“I wanted it to be like that way. Even now with “the Club” [a show Caressa hosts], every Sunday, it’s the same thing: I want people to think they are there with us, talking. Today much has changed, but my goal is still to involve viewers as much as possible”.

Grosso’s goal will always remain in history. “Tell us your feelings before the goal, Fabio. Everything seemed to say we were going for penalties…”

“I stood up and said to Beppe: now is the time to do it. I don’t know why but looking at the two stopwatches I had with me I felt that this was the decisive moment, just before the goal. Beppe and I were standing and we just let ourselves go. At the end of the game I remember that all the colleagues of the other TV stations stood up to us and applauded the Azzurri for what they had seen on the pitch. A Portuguese colleague, right below me, shook my hand and complimented me by saying: you screamed so loudly that they heard you in Portugal, too”.

What can I say, Italy-Germany is one of your greatest commentaries: probably even in the final the pathos was not as intense. “Italy-Germany had very high levels of emotional tension, like the final clearly. But the last five minutes of the game against Germany I was literally in a trance. As all Italians, I believe”, adds Fabio.

Any more memories from one of the greatest commentators? I ask him what other games he is particularly fond of.

“I remember a West Brom won 4-3 against Tottenham on a Wednesday afternoon after being 0-3 down. I remember Dynamo Kiev-Inter in 2010 [when Inter achieved a continental treble], Ronaldo’s 3-0 against Atletico [Madrid], Barcelona-Inter in the Champions league in 2010, with the Nerazzurri, besieged by the Catalans, victorious. In short, I was lucky enough to commentate several very important matches, and many of these were a lot of fun”.

What about the player?
“Zidane is the player who excited me most. I was lucky enough to commentate Baggio, Totti and Maldini’s farewell to football. I was very attached to all of them. Ronaldo El fenomeno, Shevchenko. Zidane and Totti were those who thrilled me the most”.

Whenever a player scores, Caressa says his name and surname, and that has become his trademark. “How did you come up with that?”

“Bundesliga games: there was a Bayer Leverkusen striker, Ulf Kirsten: after he scored a goal, I improvised and said his first and last name. It was 1992, I think. The producer at the end of the match said to me: that was a great way of commentating the goal! I haven’t stopped since then … Of course, it’s risky because maybe you can make a mistake: twice, in more than a thousand games, I said the wrong name after a player scored. But it can happen, it’s fine.”

Then the question comes spontaneously: “where did you get the inspiration of your art?”

“Sandro Piccinini was pivotal: I was inspired by him at the beginning. And then Ameri: he was a radio commentator but he had great rhythm. I truly believe in the rhythm of the commentary”.

For the picture thanks to Stefano G. Pavesi/contrasto

Bassano del Grappa has become the center of the world for lovers of classic and racing cars and ‘La Leggenda’ is the most intense focus point of all. Can you imagine how fun it must have been to attend such events in the 1980s? When weren’t reliability trials crowded with “chrono-holics,” those just focused on […]