Davide Riparbelli and Enrico Spaggiari are the founders of the RS Historics, a classic car racing team in Albiate, which is very close to the well-known Monza racetrack. They opened the track in 2013, building upon their long-term friendship that began when both worked with major British racing teams.

Their story is a nice one to tell because it’s about young men with a dream and one goal. Men with values, enthusiasm, and perseverance who have made a career out of their passion. 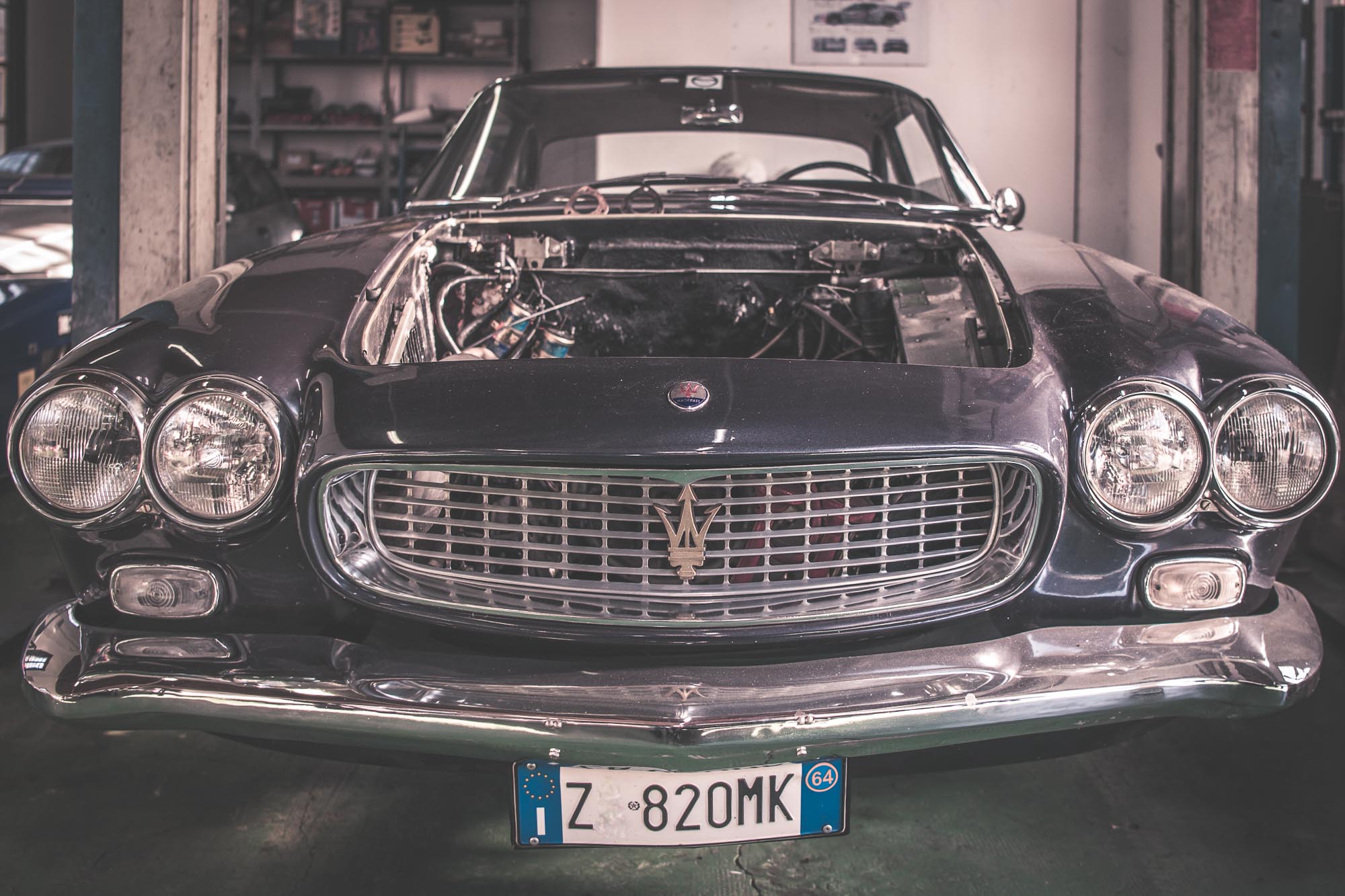 If you met these two men separately you’d never guess that they could be business partners, because their views are always at opposite ends of the spectrum. All things considered, the two for sure have many common interests, and their differences do work together to create well-defined roles in the business. So, their differences meld into a strength.

Enrico was born in 1982 and Davide in 1983: during their respective childhoods they were attracted to classic racing cars, and they always wanted to know more about them.

When they were respectively 13 and 15 years old, with the excuse of improving their English, they went to the UK and started working for some classic teams: Davide worked with Simon Hadfield, who ended up becoming his long-term mentor, while Enrico started at Classic Team Lotus, a reward for his love of this English brand that he shared with his father.

“Davide and Enrico bet on themselves, founding a classic cars team in Italy.”

The two guys met for the first time ― as if by fate ― when their respective British teams were racing the in Coppa Intereuropa in Monza in 2002. At first, they both thought that the other was English, so they started talking in English, but soon they realized they had similar backgrounds.

In 2004 Davide moved to England and remained with Simon Hadfield’s team until 2009, learning as much as he could during the major European classic motorsport events, such as Tour de France, Le Mans Classic, 6 Hours of Spa, and Montecarlo Historic GP.

The same year, Enrico began his racing career with hill climb races driving his Ford Mustang. He then moved on to the Italian and European Championship, both with the Mustang, and then later, with his beloved Formulas: a Cooper Bristol T20 Formula 2 and a Cooper Climax T53 Formula 1. With the Cooper Climax, Enrico won the British championship for pre-66 Formulas in 2011.

The experience they gained in England was a key turning point for both of them: the country is an oasis for all the “petrolheads” of motorsport and classic cars. Enrico and Davide learned, for example, the importance of the small details, originality during restoration or the preparation of a race car, and the method and professional approach of the classic racing team.

Creating racing teams with these “British values” was the main goal of the two guys, who both love Italian cars ― real masterpieces such as Alfa Romeos and Maserati. Davide says:

“We had winning cars (in Italy) that, unfortunately, over the last few years, have been overtaken by English or American cars which are faster because of lower costs and better reliability.”

The Italians worked on legendary cars such as the AC Cobra that raced the 1963 24-hour race at Le Mans, or the Lola T70 driven by the F1 Champion Dennis Hulme. Since 2012, together with Enrico, they have brought some special samples into the old garage (not the “old-style”) of the RS Historics. These include one of the few original Alfa Romeo GTA still racing and ― Enrico’s favorite ― a Lotus 21 Formula 1, driven by his majesty, Jim Clark. 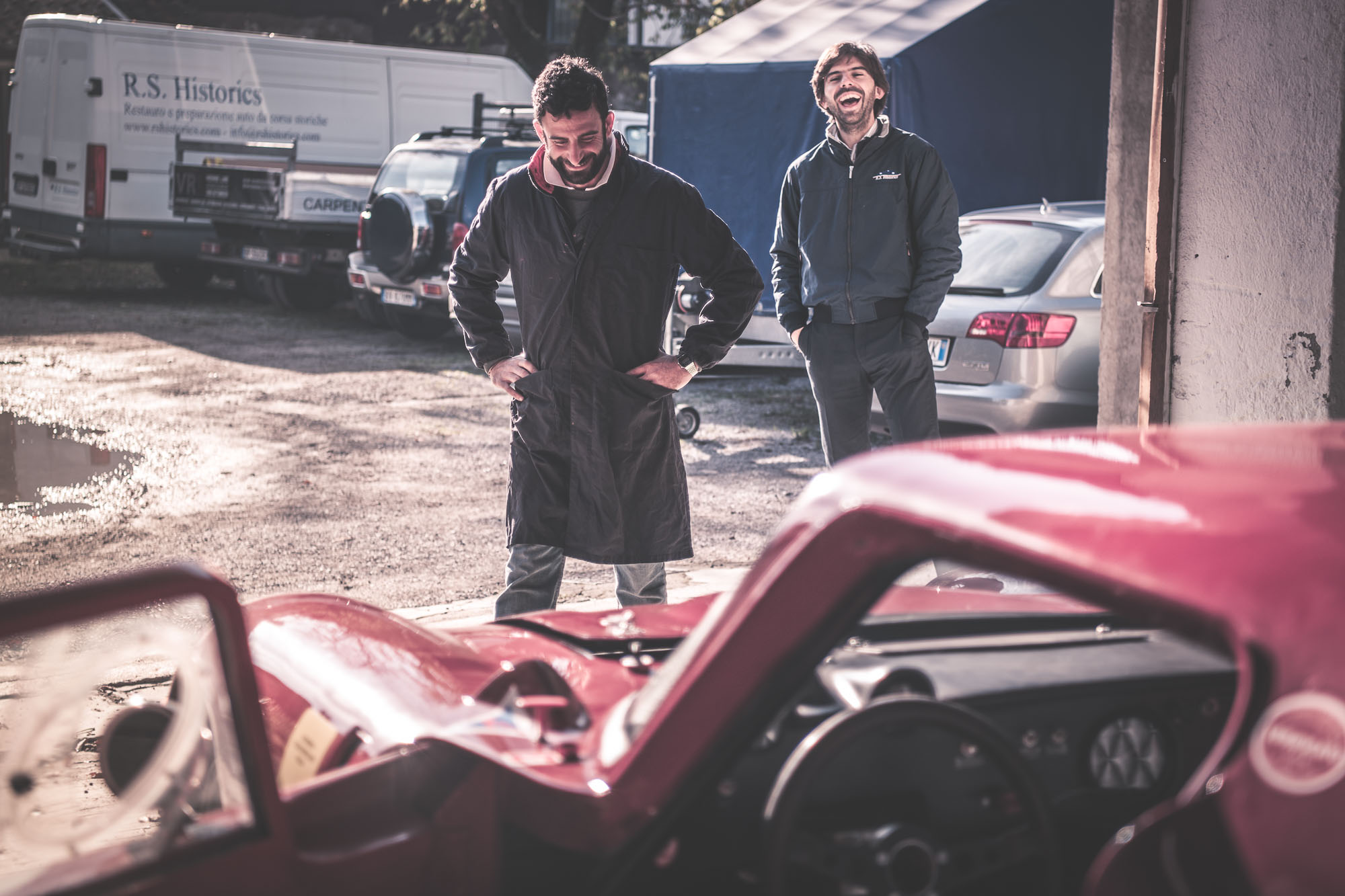 In 2012, Enrico and Davide bet on their dream of a racing team for classic cars in Italy, with the knowledge and experience gained in U.K. This mix is what RS Historics is about: preparing, restoring and rebuilding old cars.

“Wearing the blue smock, (typically worn by the best mechanics) Enrico is the team manager, but also studies and discovers the motorsport pedigree hidden behind the racing cars. Nowadays, the RS Historics is the only Italian team in this category.” 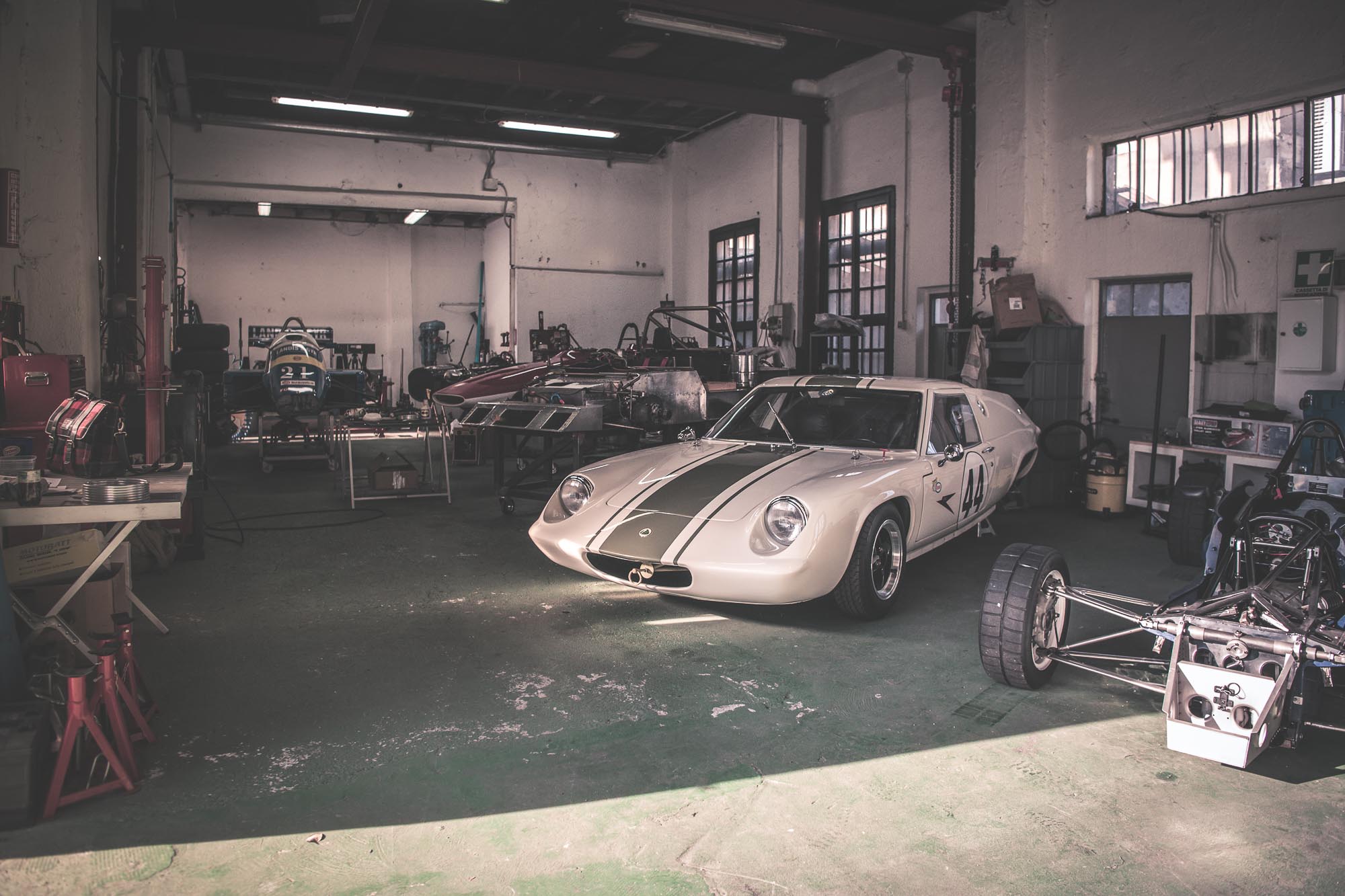 Does it seem strange that the young men preferred classics instead of modern cars? No. (at least, not for people like me who are still fascinated by the diversity of these cars).

“When you watch them racing, you’ll surely be enchanted by the energy that the classic cars transmit; much more so than efficient (but anonymous) modern cars.”

In just five years, the RS Historics brought the two founders back to the origins of racing, on the racetracks where they used to go with their British teams: Montecarlo, Spa-Francorchamps, Silverstone, Paul Ricard, Peter Auto and Master Historics championship, HGPCA, and Italian and European rally championship. They won 1st, 2nd, and 3rd place at the 6-hour SPA, of which the titles were earned by the Morris Mini Cooper S driven by Andrea Stortoni, the Chevron B9 by Federico Buratti, and the Mustang of partner Enrico Spaggiari. 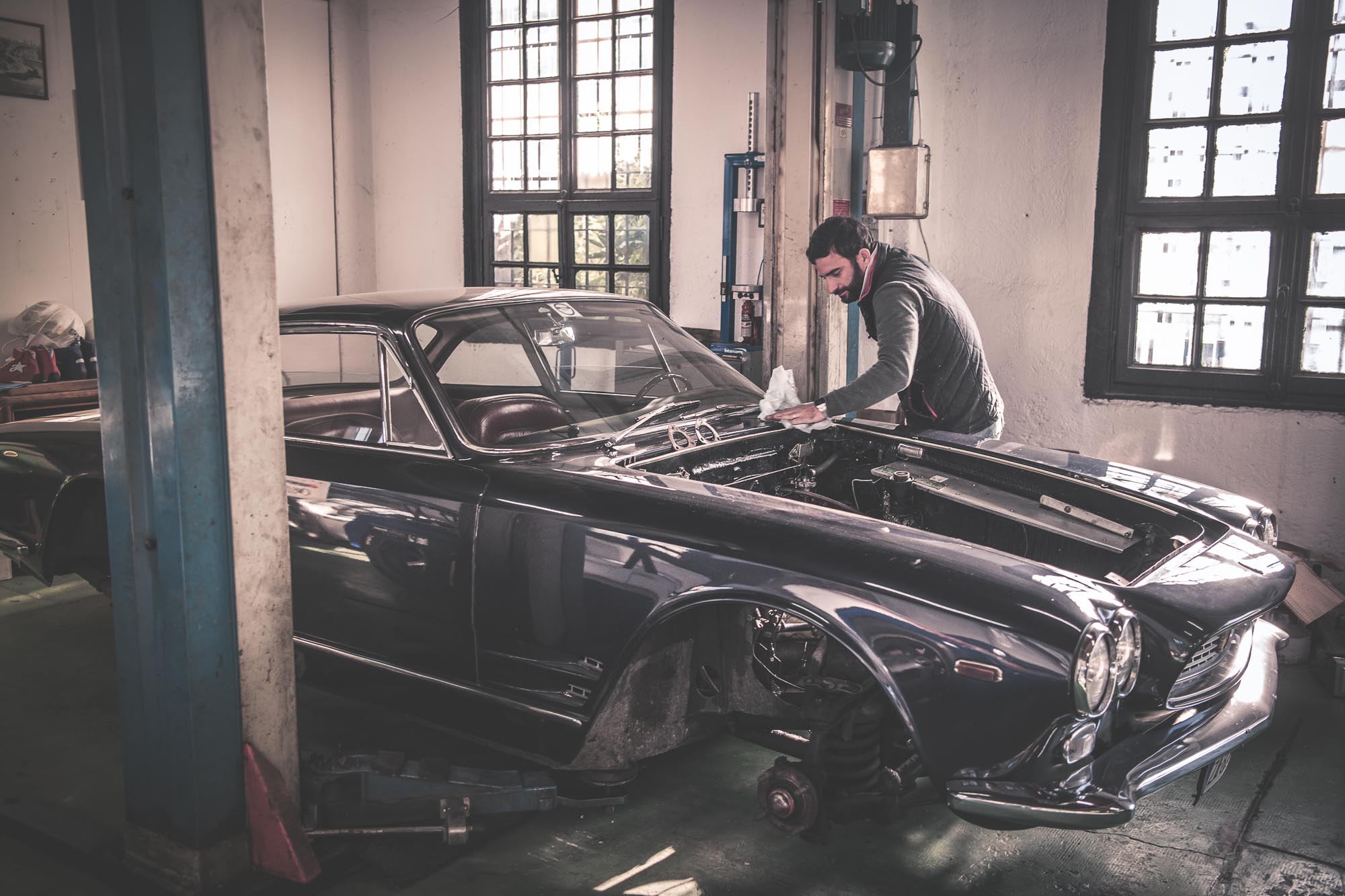 In a world where everything happens so fast and the present is the only thing that matters, we need people like the duo: pragmatic and realistic people who understand the different mentalities of English and Italian customers, but with determination reach the “checkered flag” without stopping.

Looking to the future, Davide and Enrico have different ambitions. Davide, just as his English master, would like to become the representative for classic racing cars in Italy, while Enrico still has the desire to put the helmet on and race with his Lotus 41X Formula 3, as the bearer of RS Historics. 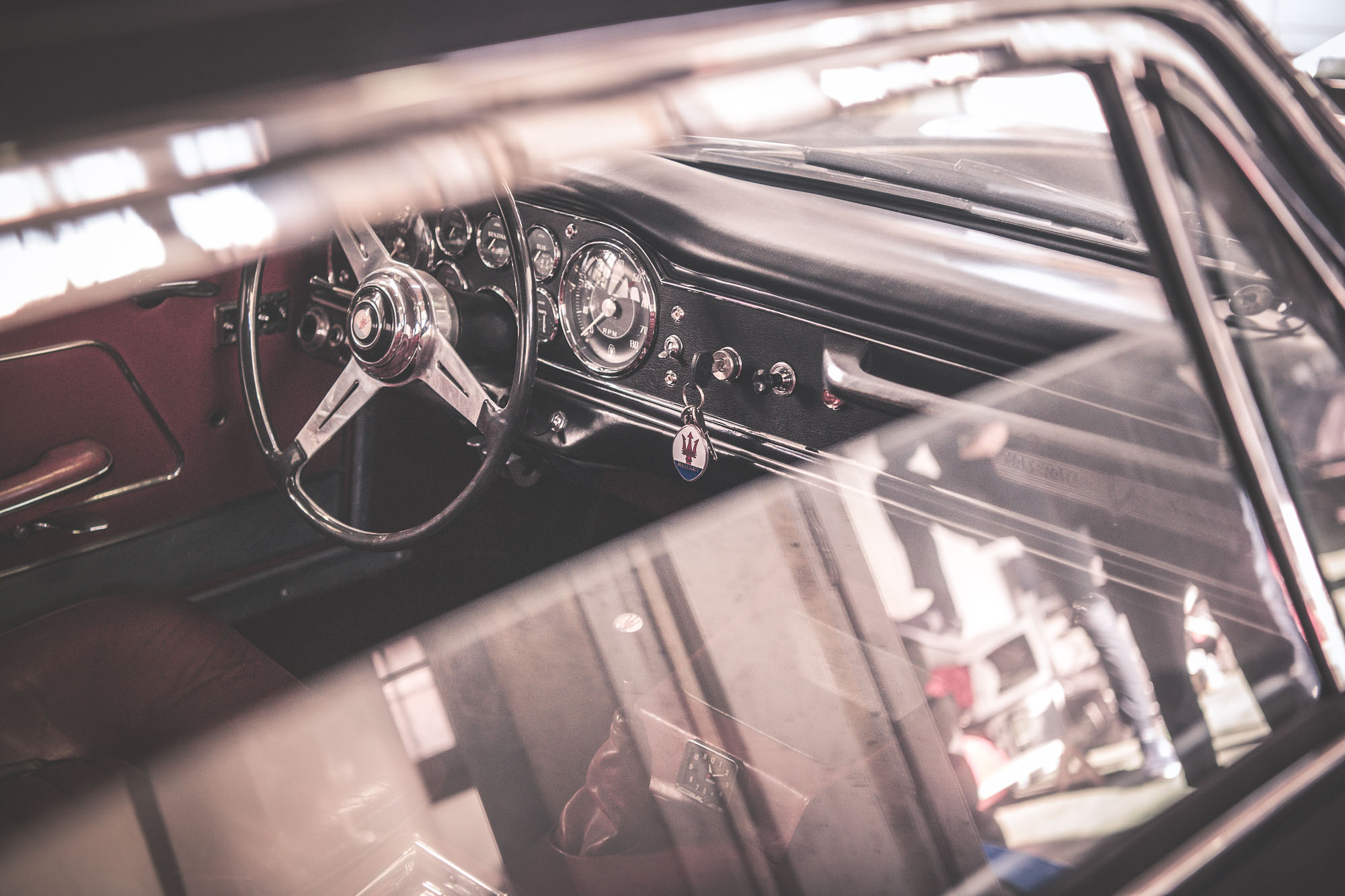 A polyhedric TV-presenter, film director and a great music lover, Renzo Arbore (born Lorenzo Giovanni in Foggia) wrote important pages of Italian television. During his long and lucky career, he collaborated with many great artists, he professionally and personally grew within TV studios and this growth went hand in hand with the evolution of TV, […]