The nineteenth annual Academy Awards is behind us and Call Me by Your Name (2017) ― the latest work of the Italian director Luca Guadagnino ― had four nominations: Best Picture, Best Actor, Best Adapted Screenplay and Best Original Song. The film is the last in a “trilogy of desire” that also includes I Am Love (2009) and A Bigger Splash (2015).

“It is the summer of 1983. Oliver, a 24-year-old American student, arrives in the countryside of Lombardy for his study abroad. Housed in the beautiful estate of the Perlman family, the young man soon piques the curiosity of Elio, the seventeen-year-old son of the couple.”

Adapted from the novel of the same name (2007) by André Aciman, the movie touches upon the troubles of adolescence without skirting around the clumsiness of seduction or the discovery of both carnal and ethereal sexuality. The film portrays six weeks in which the days never seem to pass, that are spent in a Proustian rhythm before fading into a languid chatter. 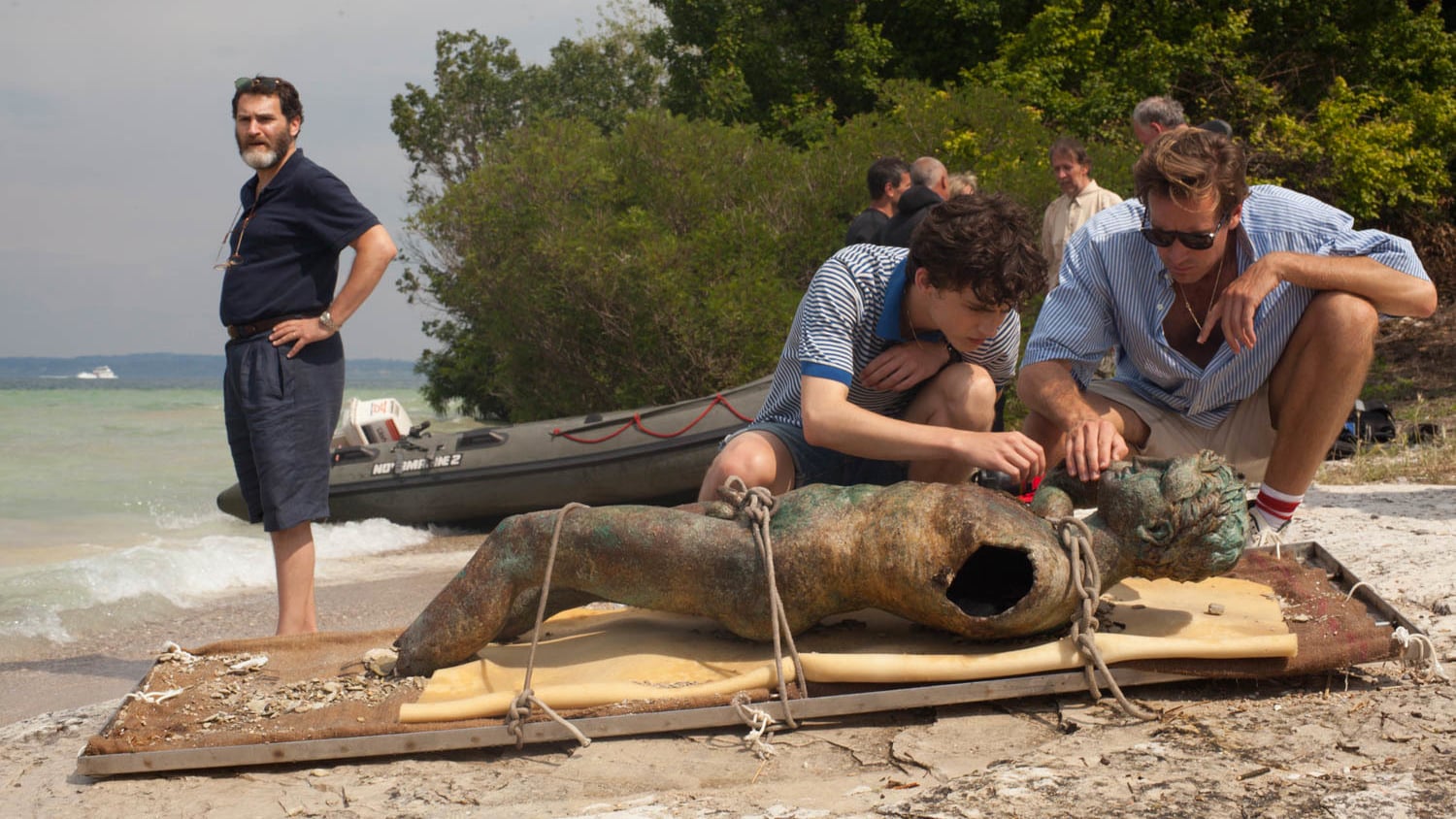 As one can easily guess, a similar thematic complexity ― enriched by the intimacy of the familiar ― can certainly not be exhausted by the world of cinema. Where sometimes words can’t tell the story, that’s where the film comes in.

“Call Me by Your Name, in fact, is enhanced by its sets and costumes, which play an active role, acting as a soundboard for the characters’ emotions.”

There’s an adolescent and sensual game between the two boys. Watching the scenes throughout the film, you feel a sense of chaste embarrassment ― you can see the nervousness in Elio’s face ― mixed with a vintage nostalgia. The clothes in the film are short, just like in all the best retrò movies. 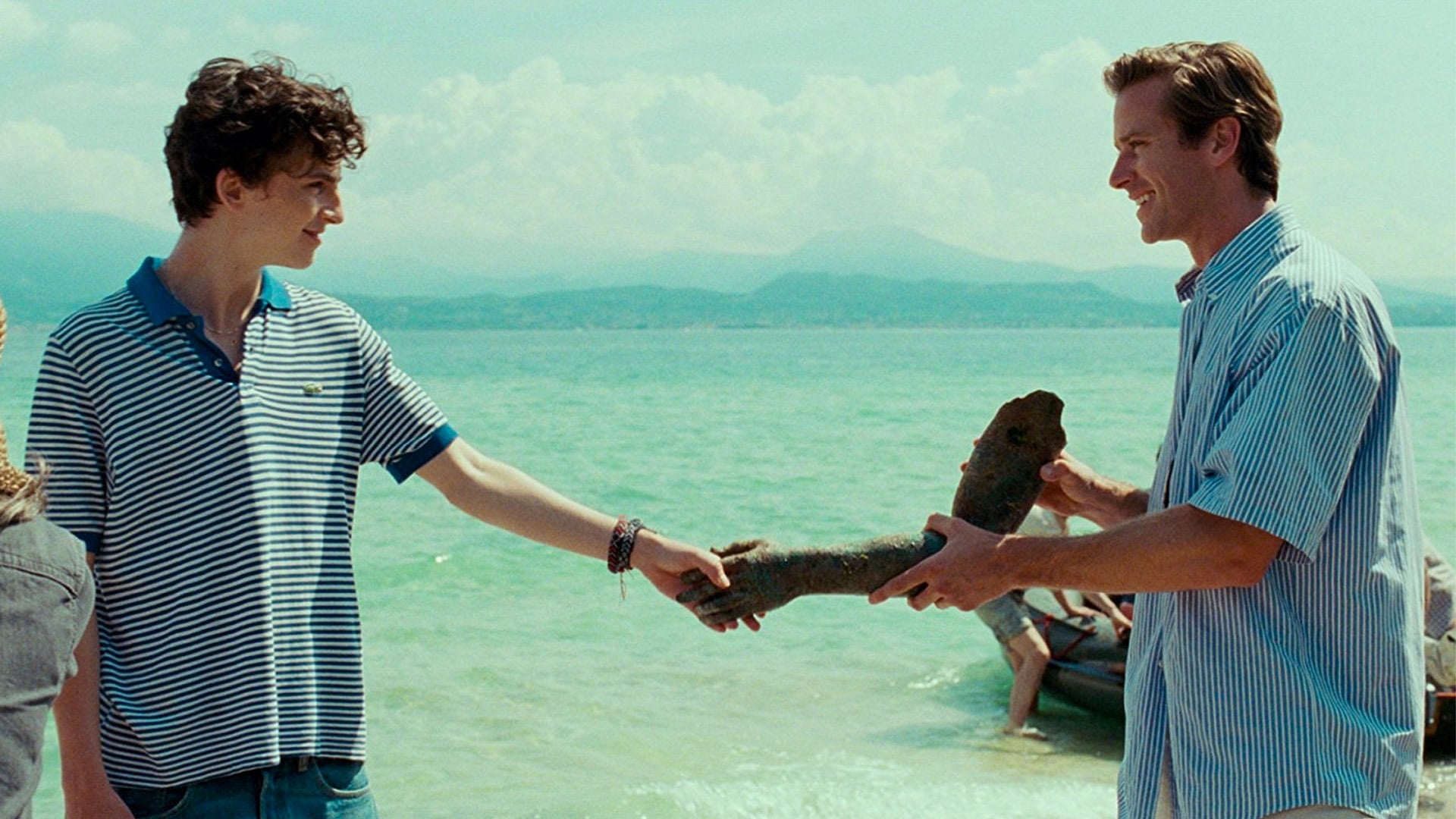 Giulia Piersanti the genius behind the stylistic wizardry, was a former designer at Céline, Balenciaga, and Missoni, and was called by Guadagnino to recreate a look that ignored the clichés of the ’80s, reverting to a more intimate and delicate representation.

“As in Aciman’s writing, in which Elio tries to portray Oliver’s feelings by observing the changing colours of his outfits, the film also offers a bright parade of pastel-colored garments.”

Looking for vintage pieces and creating new ones, rummaging through the family albums and browsing through American shots of Bruce Weber, the costume designer has thus created a casual and timeless style. Elio wears Lacoste polo shirts with Ray Ban Wayfarer Classic sunglasses, while Oliver combines his Ralph Lauren shirts with a pair of Adidas shorts, which get shorter as his tan and his desires progressively deepen. 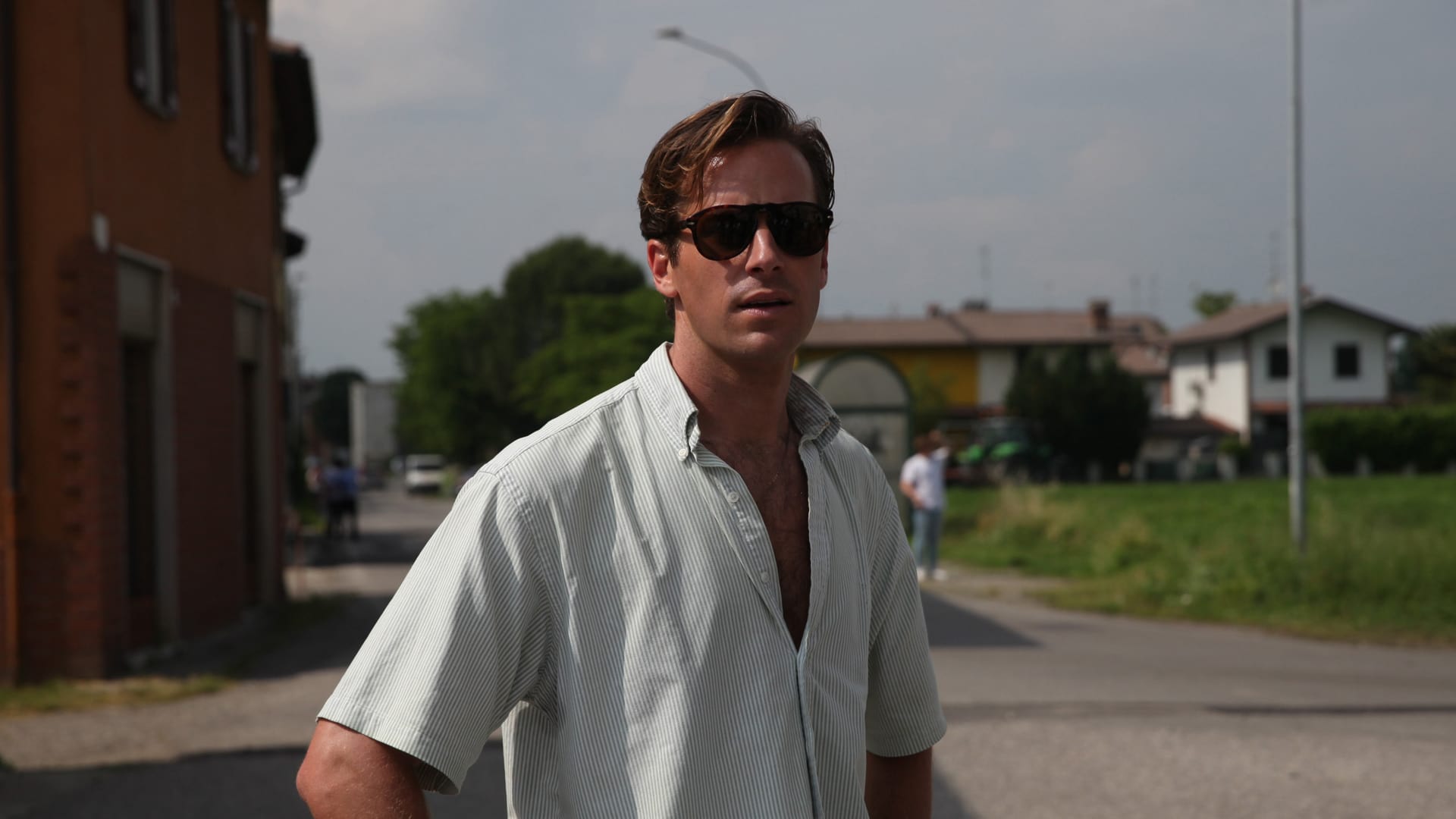 The outcome is almost a fresco, where every combination, even the most (apparently) careless, is functional to the story and even helps to perpetuate it.

“A well-worn pair of Converse shoes can seduce the viewer’s eye and reveal another kind of beauty, sometimes even deeper and more carefree.”

However, not only clothing but also the setting at the Perlman’s residence speaks to the audience. This is seen throughout the movie, starting from the director’s choice to set the events in the wealth of Crema, rather than exposing the viewer to the Ligurian horizon of the original novel. 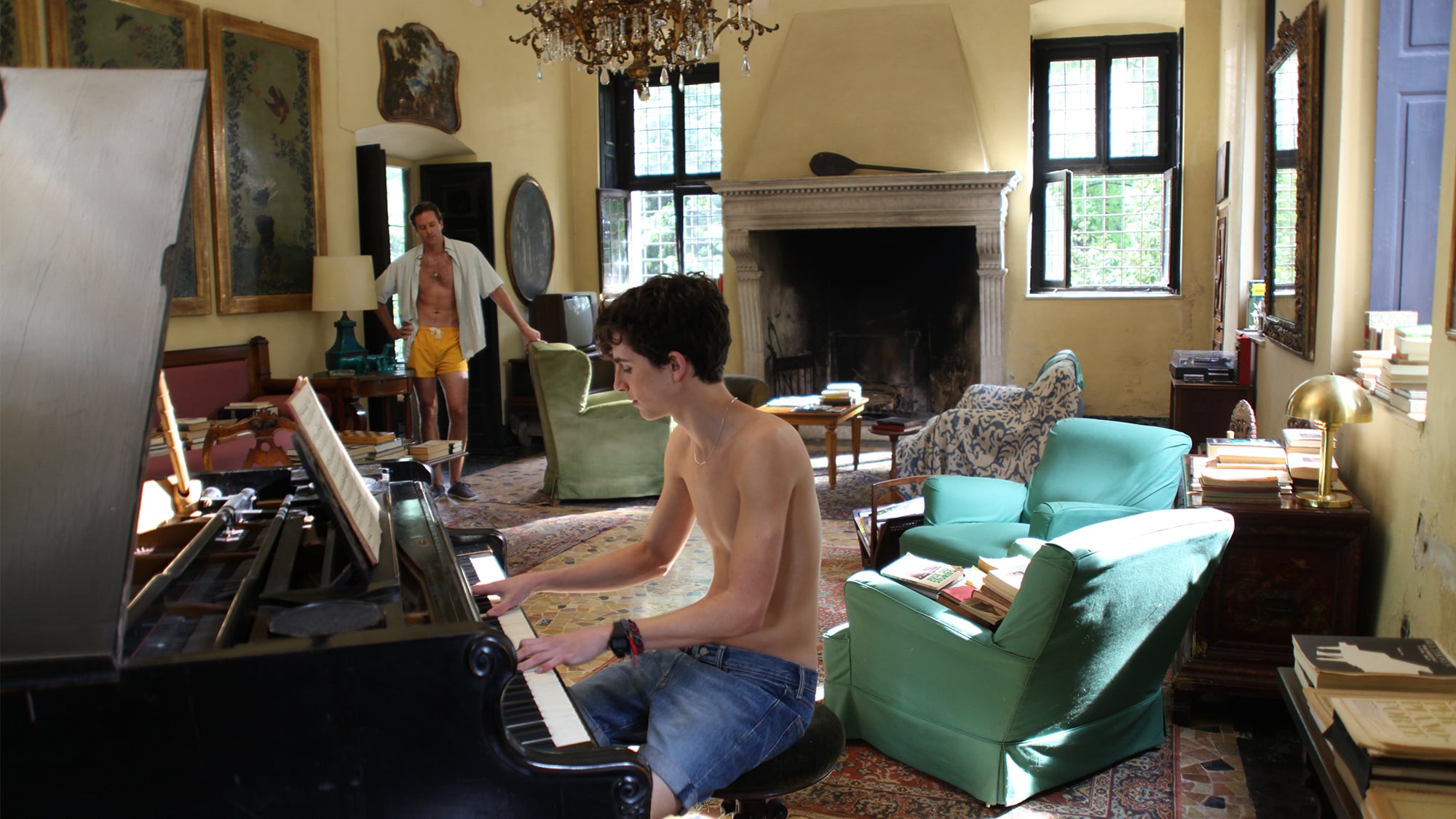 Shielded by the Lombardy countryside, in fact, Villa Albergoni shows the viewer a more profound life, in which the blunt and reserved rural everyday life meets the shadows of the Fascist past and contemporary politics. The scenery also benefits from the educated touch of decorator Violante Visconti (nephew of Luchino Visconti), who impeccably recreates the atmosphere of both a family nest and an escape shelter among bare seventeenth-century walls.

“Not a place of wealth, but a place of history. A location suitable for culture, as much as for leisure time. A living, and loved house, accommodating, even if not structured. Weighed down by the years and by a certain inconstancy in its presence, but, at the same time, enriched by memories and by the affections of those who have lived there.”

Between the living room and the office, there are armchairs covered with Indian cotton, a late nineteenth-century piano, some Japanese prints, stacks of old books, maps from Piva Antiques and Libreria Antiquaria Perini, vases, and green bamboo leaves. 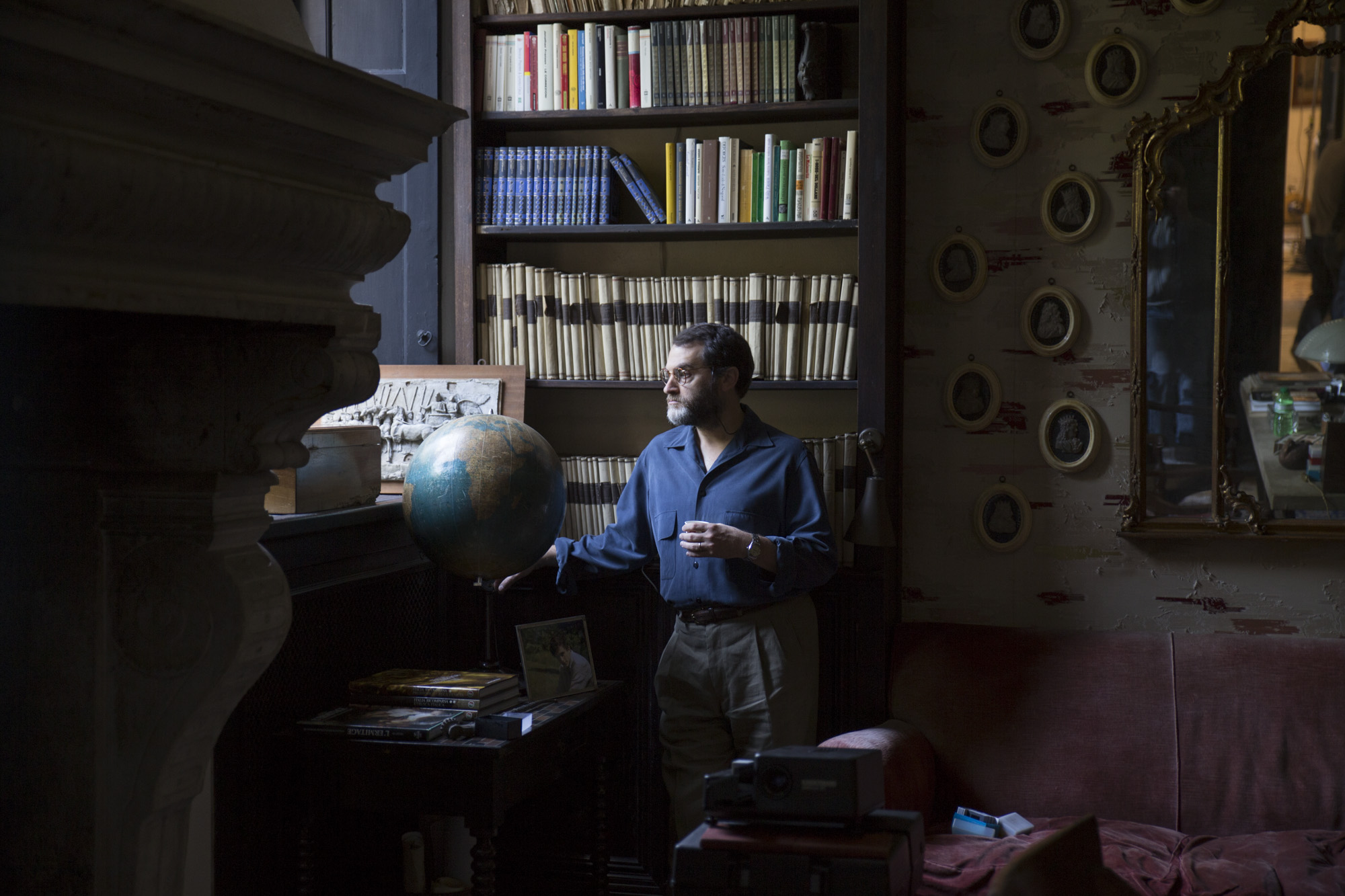 If these elements bear witness to domestic unity ― which climaxes with an outstanding monologue in the pink seat of a shabby-chic sofa by Elio’s father (an immense Michael Stuhlbarg) ― the bathroom shared by the boys and the outside of the house suggest a far more sinful intimacy.

“The 1930s-style bathroom ― tiled in pale blue ― adopts the metaphorical contours of a space where physical and emotional nudity merge. At the same time the outdoor pool ― ingeniously built on a pre-existing drinking trough ― alters the voltage of a latent sexual tension, ready to flare up among the branches of a garden that becomes a metaphorical forbidden fruit.” 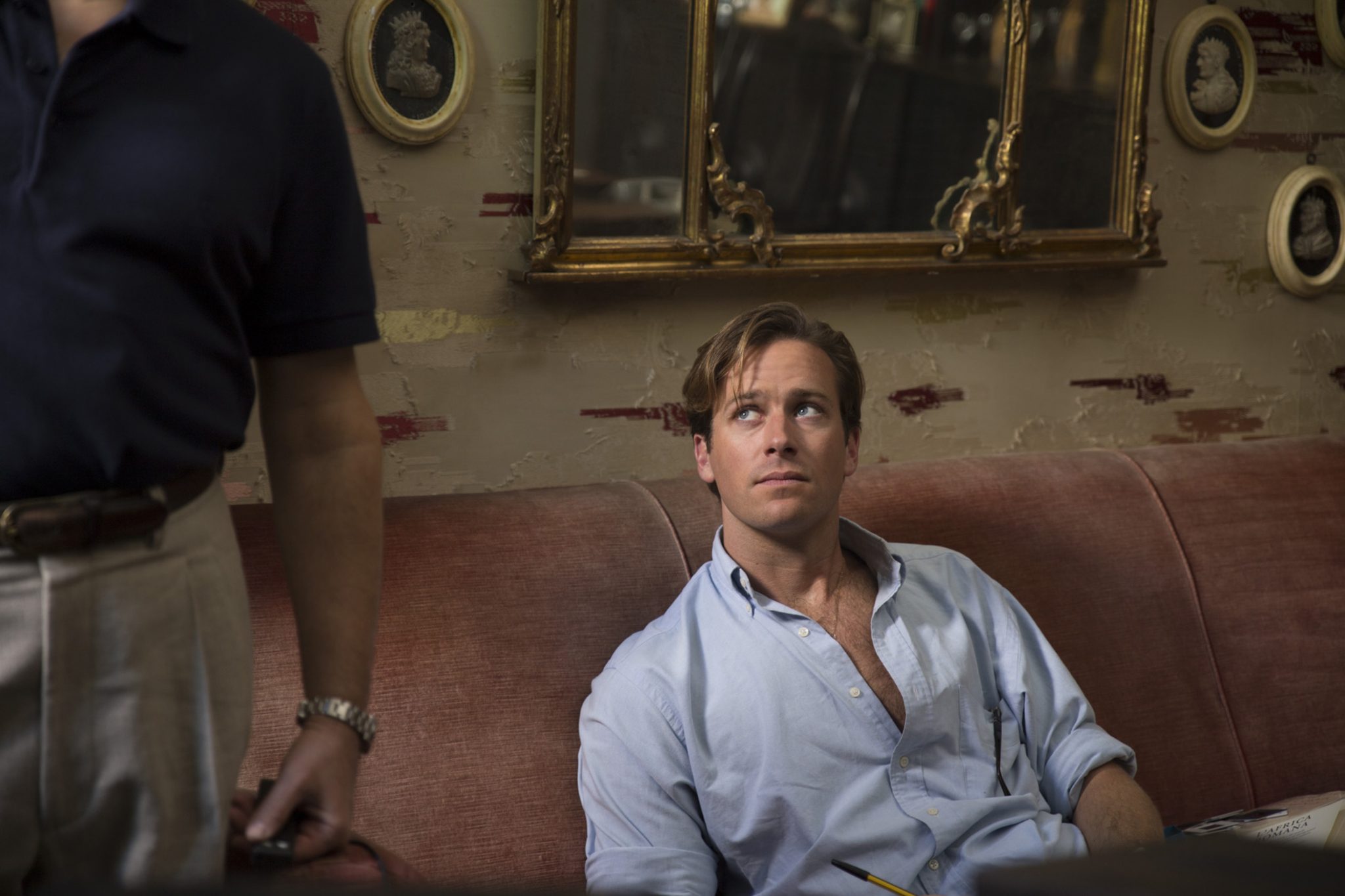 Introduce yourself properly with Elisa Motterle

IIntroducing – oneself or others – is one of the most frequent social “rituals”. Yet it can often cause problems. «I am a Pisces, ascendant mayonnaise…» For a number of reasons it is easy to feel awkward and become stiff as a board, or on the contrary to start talking non-stop, just like Renato Pozzetto […]