Icon of fencing around the world, Valentina Vezzali is also a female symbol that defies any gender prejudice. She is the most “medaled” Italian athlete of all time, queen of foil, mother of two, sports ambassador (especially fencing, obviously) among young people.

«I am ready to challenge my limits. History poses them, men must overcome each other to generate more obstacles that will be brought down in time. It’s sport, like life.»

In 2019, I had the opportunity to stay in close contact with Valentina, during the promotion of the Italian Absolute Fencing Championships in Palermo. I understood that she never really left the piste: she continues to live like an athlete. 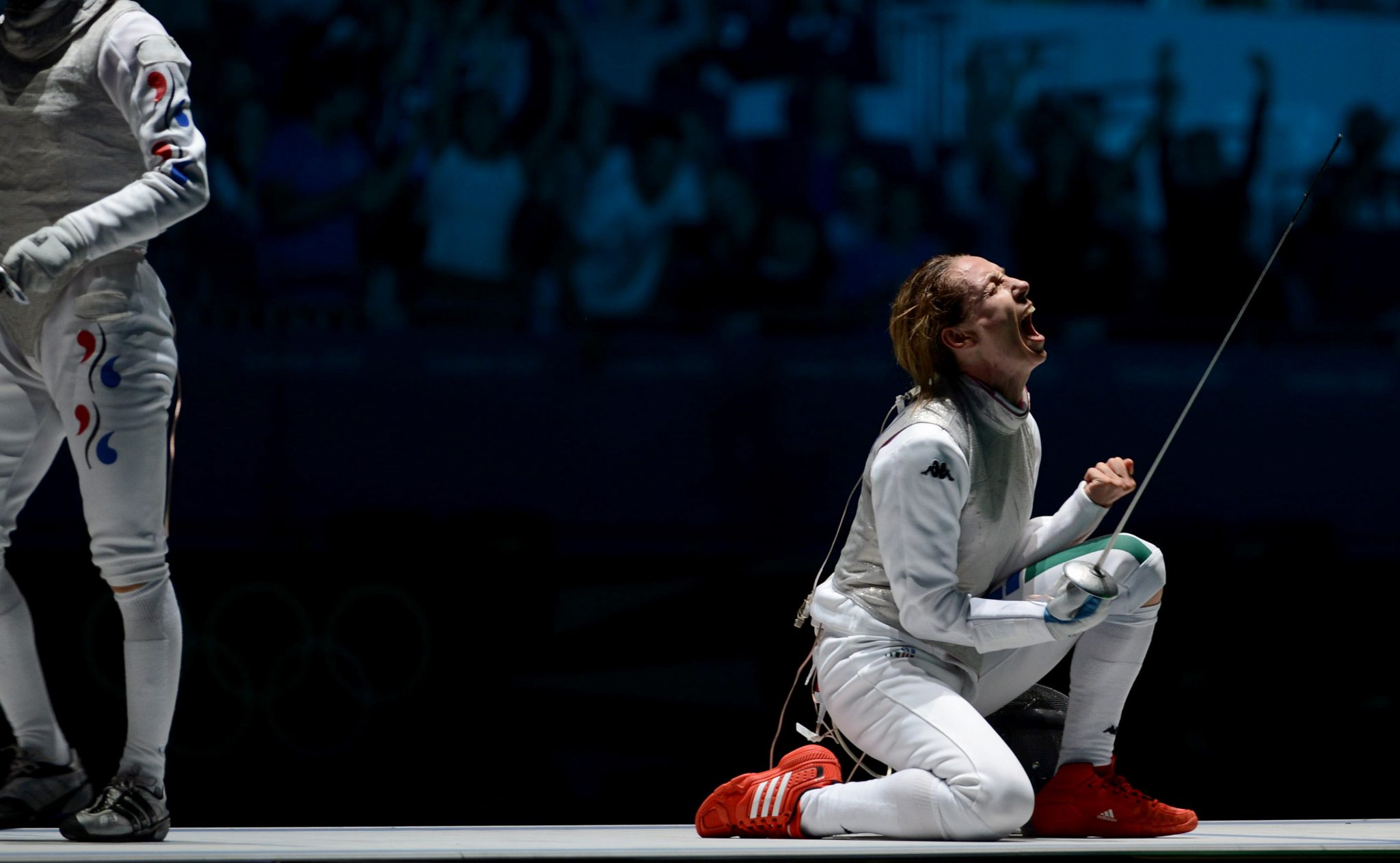 On this day dedicated to becoming aware of gender gaps we still have to fill, I’m focusing on sport, an extraordinary channel, capable of breaking down all forms of disparity. The beauty of an athlete is unisex: a performance is beautiful regardless of sex, at least from the spectator’s point of view – don’t you think? I ask her. – and from the athlete’s point of view, are there differences/difficulties?

“Sport is transversal: the emotions that a male athlete gives are the same as those of a woman. I believe that the emotions following a goal, a slam dunk in the basket, are the same regardless of gender. I was lucky enough to practice a sport, fencing, where there has never been a difference between men and women. So I never had to face this kind of difficulty. Indeed, I know that there are certainly some disciplines where this difference is quite noticeable, and in this sense, there is still a long way to go”.

But let’s start from the beginning. At six, Valentina took her sister to the gym and there she met the founder of the Jesi school, the “Maestro” Ezio Triccoli. I turn to her: “with fencing, it was love at first sight…”

“Yes, with fencing it was love at first sight, absolutely. I immediately fell madly in love with this wonderful sport and I always have fond memories of my beginnings on the piste”.

Which is the victory, among many others, that you remember with greater affection?

“I have said it before and I shall repeat it now: I will never forget the one in Rome in 1984, in the first category, when I was 10 years old. Going to PalaEur for my first Italian championship, we finished at 10 in the evening: I didn’t have time to remove the mask that my father took in my arms and made me spin in the air. It was great because Daddy was there. That race was the start of everything”.

Has anyone ever said to you “you will never make it” or other phrases like “you are nothing”?

“Since I started fencing I immediately started winning – and here Valentina laughs heartily – It was not easy to find someone who said “it’s not for you” or “you won’t make it”. I was lucky to achieve excellent results early on; what matters is to always be aware of the fact that you can win and lose, but you still have to give it your best and stay up”.

In sport, as in life, there are ups and downs. So I ask her, “what was, if there was, the most difficult moment of your career?”

“I certainly remember the knee injury of 2006 at the World Championships in Turin: there I had the feeling that nothing would be as it was before. I remember that after returning from my operation, four months later, my body did not respond to what I wanted, to the movements I thought I was doing on the piste. Slowly I recovered, but I remember that I was very afraid. The following year, at the World Championships in St. Petersburg, I found my usual form and managed to win and make up for the great disappointment I had suffered”. 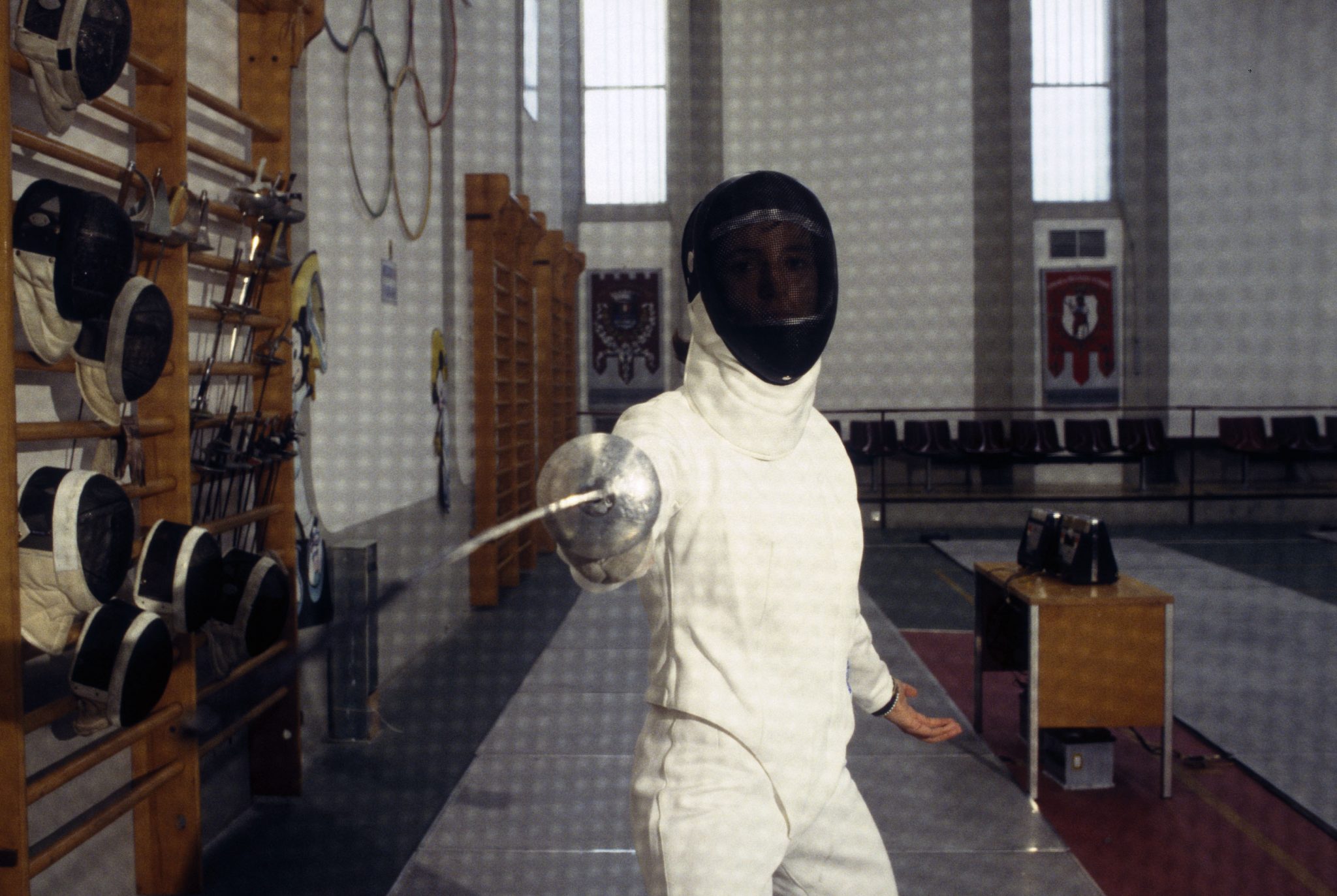 Yes, I think, every sporting path is hard and intense, especially the one that leads to the Olympics. We rewind the tape again, and “let’s go back to your first Olympics: what feelings do you remember before leaving for Atlanta?”

“Atlanta: my first Olympics, I was 22 years old. It was really beautiful, I was at number 1 in the world ranking. I remember that the Italian Olympic Village seemed like a playground to me: something wonderful, a magical experience. Really”.

If it hadn’t been love at first sight with fencing, what would you have done when you grew up?

“I wanted to be a dancer, but from that time in the gym with my sister I immediately understood that I would always and only do fencing”.

Which is hardest, being a mother or an Olympic champion?

“It was easier to win an Olympic gold medal than to raise my children. I’m not kidding at all. We live in a complicated reality, in a totally globalized world where the Internet and video games are the absolute masters. I try to direct my children towards sport: I think it is important that they spend the afternoon in the gym socializing and moving rather than in front of the PlayStation or an Ipad”.

What is Valentina’s life like after retiring? What did you appreciate and what do you miss about competitiveness?

“I had always been fencing, from the age of 6 until my retirement. I decided when to quit and I did it at the right time. After retiring I got back into the game, I try to contribute as much as possible to the development of the Italian fencing movement. It’s a big challenge, but I’ve always liked challenges”.

Valentina now works as an advisor for the Italian Fencing Federation and promotes fencing around Italy. Until a few decades ago the Italians had a rather casual relationship with fencing: they saw the epee, foil, and saber every four years, during the Olympics. Now this sport is better known and many children even small, decide to do it.

“Fencing has given more medals to Italian sport than any other, I always like to point this out. And, inevitably, this speaks volumes on the fencing itself: on important occasions, the important ones, it never lets you down. When I was young my hero was Dorina Vaccaroni, I wanted to be like her. Being (together with other athletes) a reference point for many young people has filled me with great pride. I am happy that today lots of people decide to practice fencing as children: I only hope that sports facilities can improve throughout Italy. From the North to the South there is a need for adequate structures for our guys.”.

What does sport represent (and what has it represented) for you?

“Sport is everything: sport is a metaphor for life. We win and lose, we get up, we start again. If done properly, sport can truly become a school of life. With respect to the rules and opponents, you can go far and build something important. What Maestro Triccoli taught me was fundamental for me, and I come back to it every day. Sports have rules that must be respected: I believe that the educational role of sports is crucial for the growth of young athletes”.

One final question: what would you recommend to young people who decide to start with fencing?

“My advice goes above all to parents: raise your kids with sports. Sports are fundamental for children’s growth: they embody aggregation, competition and other values ​​of great social impact.”

Okay, maybe not the last one. I am curious, I have seen fencing up close (as a journalist, never as an athlete), so I’ll ask you: what does fencing have more than other sports?

“Fencing, in particular, teaches you to concentrate more than other sports. Getting on the piste has a particular taste and gives you unique emotions”.

Well, thank you, Valentina; you give your emotions to me, to us, who followed you.

For the picture, thanks to Xinhua / eyevine/contrasto and Stefano G. Pavesi/Contrasto