Chet Baker is the epitome of “Cool Jazz”. In the late ‘60s, the American trumpet player passed through Italy and left his mark – a legacy of mixed feelings.

Hotel Universo, Lucca, room 15, 1960. Every day, trumpet in hand, Chet Baker stands by the window facing the area surrounding Teatro del Giglio, while a crowd of curious youngsters gaze up from below. Like a magic piper with an angel face and demonic soul, this mysterious shadow fills the opened window.

From a distance, the young ones struggle to focus. They can faintly see a greasy-haired man, shirt sleeves rolled up, holding a golden trumpet reflecting the last sun rays of dusk.

Chin on his chest, his lips lightly touch the polished mouthpiece. Every day, Chet holds his breath. He breathes in and out, letting the mild notes surround the kids who gaze up and try to capture the sweet melancholy that conjures images of sun-soaked San Francisco beaches.

“I’m definitely a romantic, I don’t think life is really worth all the pain and effort and struggling if you don’t have somebody that you love very much.”

Baker left his San Francisco in 1958, or rather he ran from it. He ran away from his growing heroin addiction, which he planned to wean off once landed in Europe. Paris first, then Milan, Florence, and Lucca he was still haunted by the same sinister addictions. 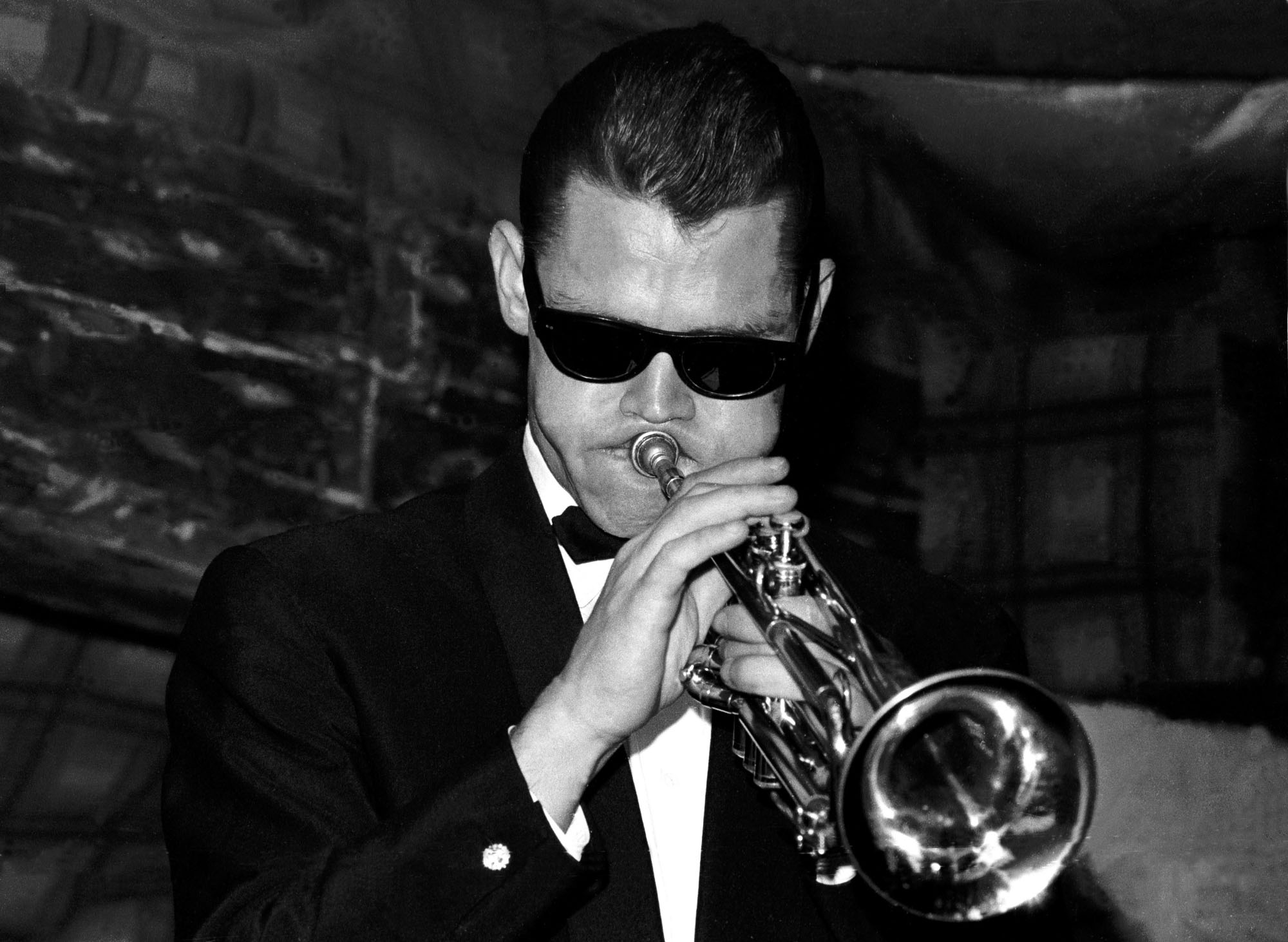 Chet already was a renowned artist when he landed in Italy in 1958. Downbeat Magazine’s readers nominated him America’s Best Trumpet Player in 1955, making giants like Dizzy Gillespie, Miles Davis, Clifford Brown look pale in comparison. He was the ‘James Dean of Jazz’, the white king of black music.

But somehow, this guy from Yale (Oklahoma) never knew what to do with all of his fame. He loved the thrill, the freedom to drive a top-down convertible with a stunning chick on his side, and a cigarette in his mouth.

“In Europe they look upon jazz as art. In America, it’s a diversion. Somebody opens a restaurant and installs another band off to the side. People don’t listen.”

He arrived on the shores of an Italy still struggling to get back on its feet at the end of the ‘50s. He thought the peninsula kissed by the sun and cuddled by the sea could be the best place to begin his recovery. But his drug use and abuse still followed him everywhere he went.

Many times Chet tried to go to rehabilitation, to no avail. With no money in his pockets, still, he begged doctors for medication, managing every once in a while to scrape up some prescriptions. Between May and July 1960, he managed to collect 23 Palfium prescriptions, a narcotic three times more powerful than morphine, to inject into his veins.

On July 22nd, 1960, heading towards Le Focette (Marina di Pietrasanta) Baker stopped at a gas station to inject the drug. Stuck in the small bathroom stall, Baker tried to find a viable vein to shoot up, with no luck. He panicked as time wore on – too much time – which made police officers who happen to be nearby suspicious.

Knock knock. The greasy haired man opened the door, trembling too hard to find an excuse for his behavior. He was finally arrested for holding illegal substances and is bundled off to the police station. The day after, all the newspapers report his case and his suave legend became spoiled by yellow journalism. On April 1961, Chet Baker was sentenced to 16 years in jail.

“I don’t believe that jazz will ever really die. It’s a nice way to express yourself.”

From that moment on, the curtains casting shadows inside room 15 at Hotel Universo were kept closed. Baker and his disquiets were now kept in the dark of a prison cell, where silences are marked only by dawns and dusks.

The only thing he asked to the head officer, in his shy Italian, is to carry with him her faithful companionship. The head officer nods.

Baker starts painting the grey walls with his notes, freeing them from the prison cell to the streets, filling the halls, and spreading around the area surrounding San Giorgio jail, making it the new gathering point for youngsters.

The same kids who had watched him from that window in Versilia, started seeing him as a messiah. On the same area where the kids had first gathered, clarinettist Henghel Gualdi played an impromptu concert on Christmas Eve with other four musicians honoring Chet.

During that time, Baker managed to wean off drugs and to compose more and more music, making his imprisonment one of the most prolific times in his career. Officers and cell mates became fond of him, calling him ‘Maestro’ and ‘Professore’ for his politeness and comprehension.

After a year of hell, Chet was finally sent back to the outside world, and many believe that his most turbid side was finally been laid to rest.

Baker’s permanence in Italy ends in 1964. Jazz’s Angel Face finally heads back to the US, leaving a mark on the Italian ground as a musician and as an actor He made many remarkable contributions to the soundtrack for ‘I Soliti Ignoti’, ‘Urlatori alla sbarra’ and ‘Smog’, in collaboration with Ennio Morricone and Piero Umiliani.

“That evening when the Lucca papers came out, they carried a story that went something like this: Chet Baker famous American Jazzman found unconscious in gas station toilette. Police were forced to break down the door. Baker was covered with blood and most of the room as well. Allen, I wasn’t unconscious, they didn’t break down the door, nor was there any blood…”

His contribution was so groundbreaking that still today his shadow seems to be still there, by the window of room 15 of the Hotel Universo, surrounded by melancholic beauty. Those silent crimson sunsets are still filled with his gentle notes, tracing the path to freedom that Baker managed to find only on a May night in Amsterdam, in 1988.

Born in 1940, Gigi Proietti sports a broad smile across his face, speaks in his warm roman accent and has an “explosive” personality. An endearing and versatile artist, he quickly rose to fame as a talented comedian and is now considered one of the greatest actors on the Italian stage. “I enjoy myself and they […]