In Emilia Romagna region of Italy, the rampant horse of Ferrari is not the only successful automotive brand. There is Lamborghini as well; the legendary rival of Ferrari. Some years ago a museum dedicated to its founder, the clever Ferruccio Lamborghini, was opened. Lamborghini had success in many endeavors, from tractors to cars, even wine.

A visit to the Ferruccio Lamborghini Museum (reopened in 2014) starts the same as the origins of the man: agriculture. In 1947 his first important invention ― the “Carioca” tractor ― was created, merging Ferruccio’s environment with his passion for mechanics.

As the son of farmers, he used his knowledge to build something low-priced and compact, and sourced from components recycled from the Second World War. Soon the Carioca reached great levels of success.

“Usually the Cariocas were yellow or orange, Ferruccio’s favorite colors; he also later used the colors on his cars.”

His second company, “Lamborghini Bruciatori” (burners) opened in 1960, and another in 1968 that produced oil-pressure activated pressure and power pumps. 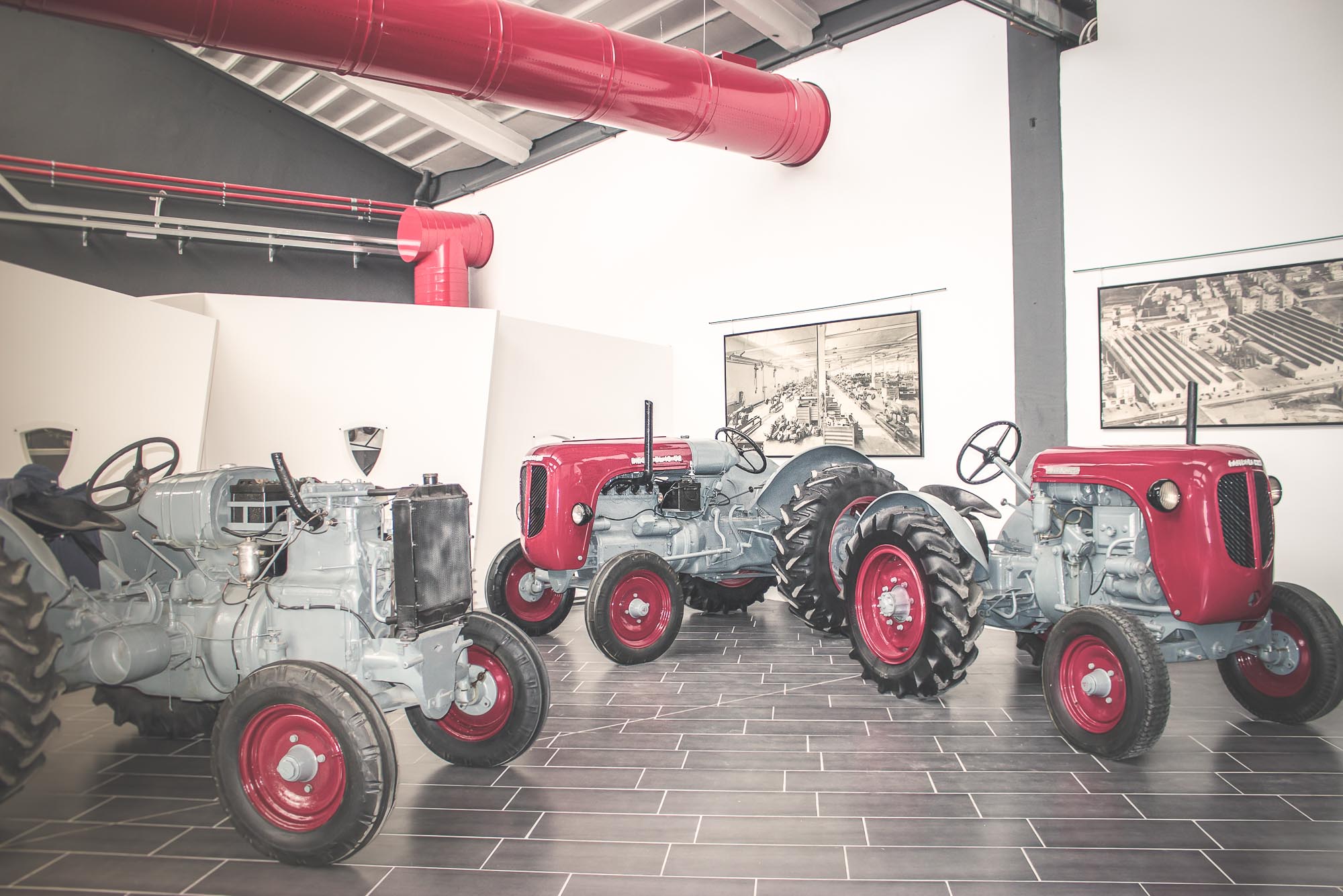 However, his most famous and beloved creation was the Lamborghini Automobili, launched in 1963. Ferruccio had always been crazy for cars, power, and high-speed: in 1947 he modified his Fiat Topolino into an open two-seater, working on the engine and overhauling the mechanics; he also attended 1948 edition of 1000 Miglia. Thanks to his success as an industrialist, by the 60’s Ferruccio was able to buy the world’s fastest GT: the Ferrari 250 GT. Legend says that this car had a lingering problem with a heavy clutch. So, he invented his own solution.

When Lamborghini went to Maranello at Enzo Ferrari race track, complaining about the problem and showing him his homemade solution, Mr. Ferrari, visibly annoyed, dismissed him, saying:

“Keep building tractors because we do know how to build cars.”

That sentence probably inspired the birth of Lamborghini cars. In October 1963, Ferruccio presented his first supercar with a brand new 12-cylinder engine designed internally, twin cams, 6 double corp carbs, and 358 horsepower. The head of the engine design was Giotto Bizzarrini, a former Ferrari engineer, and father of the 250 GTO (he had been a consultant on the project before engineer Paolo Stanzani, who ultimately subdued the brutal and “racy” beast).

Franco Scaglione was the original designer of the body, which was judged to be too futuristic. So, Carrozzeria Touring reshaped the first prototype body with softer, and more European, lines. In 1964, the 350GT was delivered to the first client. It was sporty, “not too innovative but perfect,” and better than any other Ferrari: these were Ferruccio’s main goals. 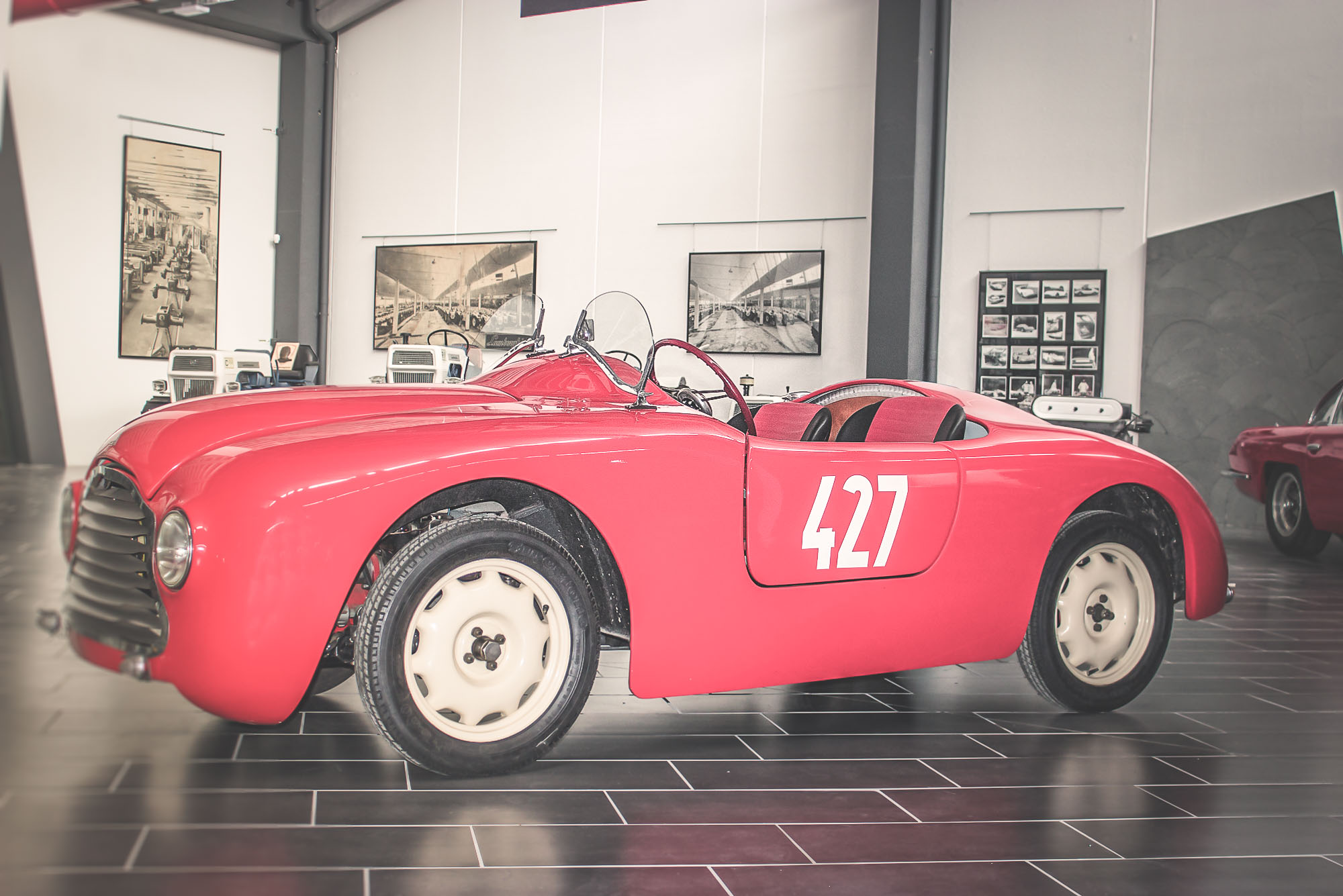 The symbol chosen for the car company was a bull, which has still remained the same after 50 years: it was Ferruccio’s zodiac sign, and was also inspired by the bulls from the Spanish Corrida races.

Lamborghini tried to produce helicopters as well: the museum showcases the one and only prototype in existence. Innovative and futuristic, it gained a certificate enabling series production, but political decisions supported Agusta Motors, rather than the company of the bull. 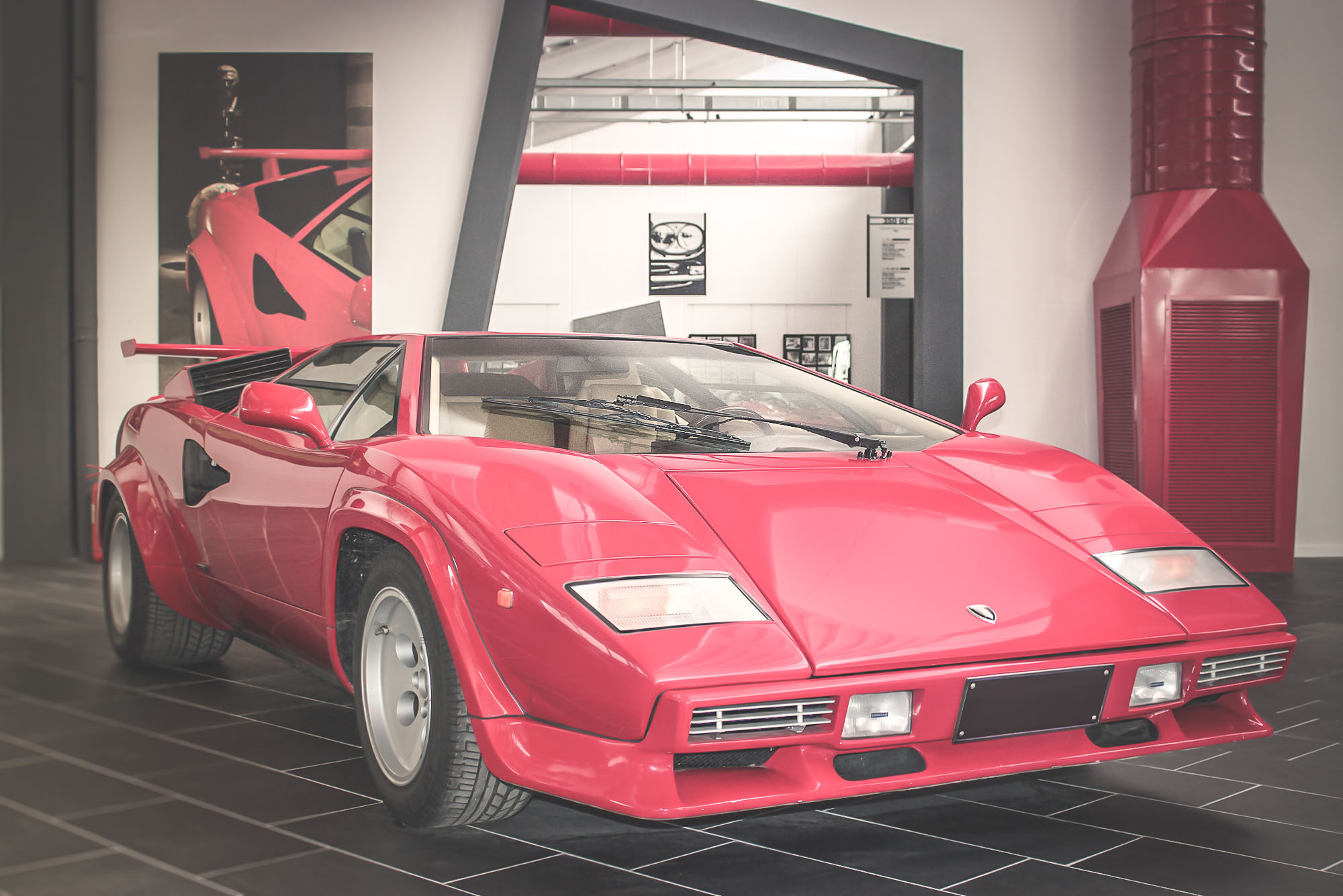 Among the many cars shown in the museum, there is the maquette of the first 3500 GT, styled by Scaglione, and next to it, Ferruccio’s outstanding personal Miura SV ― when it was introduced at Geneva Autoshow in 1966, all other cars became dated in one second. It was revolutionary.

With a transversal engine and just 105 cm in height, it was the first series car that could reach the top speed of 300 km/h. In no time, VIPs and Hollywood stars wanted the exotic masterpiece. Frank Sinatra said:

“If you want to become famous buy a Ferrari, if you already are, buy a Lamborghini.”

Then came the Espada, the 4-seater GT, 5 meters in length, with speeds up to 250 km/h, and in the typical style of Bertone. Compared to its competitors, the Espada was the only GT with an engine, gearbox, and transmission fully produced internally. 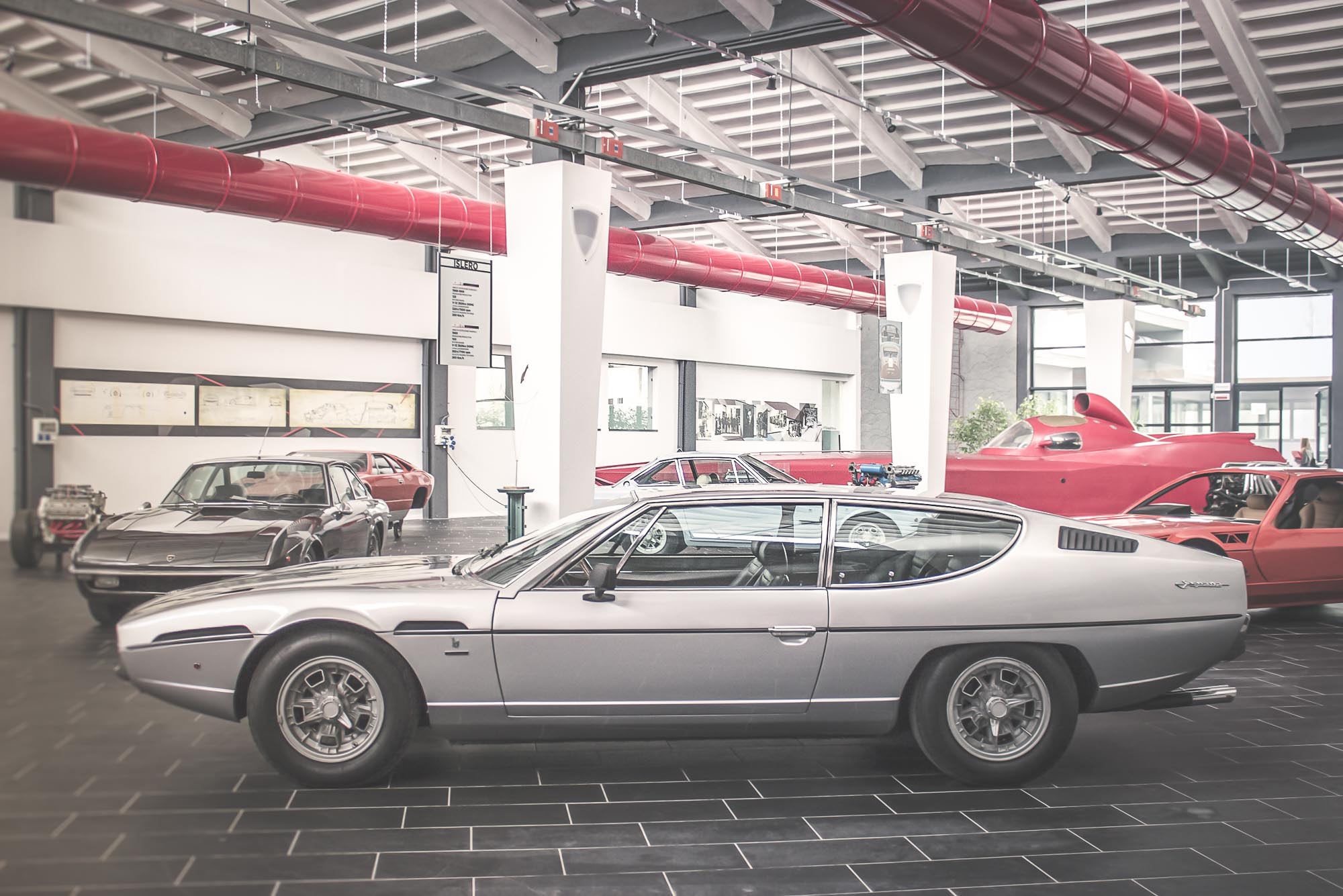 After the Espada came the Islero, the Jarama, the Urraco, and the 1971 Countach, a new revolution among the supercars with its “scissor doors,” which are still used on 12-cylinder Lambos.

This car had been produced for more than two decades ― continually upgraded ― and in its last evolution in the early 90’s, it could reach speeds of 315 km/h. These models sanctioned the purchase of Lamborghini Automobili by Swiss investors, while Ferruccio returned to his original passion: farmland. He started in Umbria with the production of wine, creating the famous “Sangue di Miura” (Miura’s blood). 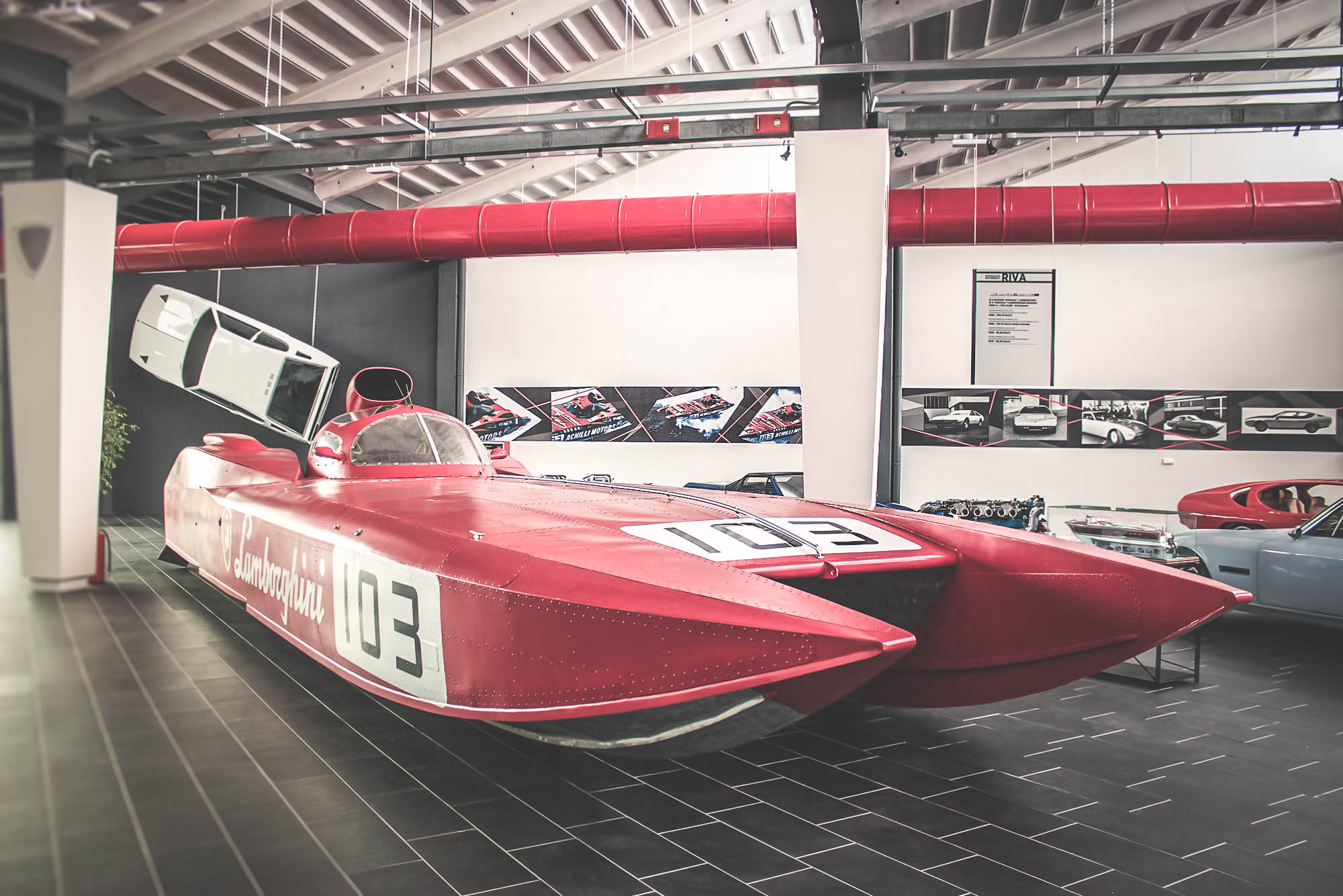 Later years were difficult for Lamborghini Automobili: the company was bought and sold without any future, any innovation, or any new model able to compete in the market. In the mid 80’s, Lamborghini was acquired by Chrysler Then, the final re-launch was in 1998 thanks to Audi (Volkswagen Group) which had seen the huge potential of the company and its workers, bringing them all to 21st Century success.

Ferruccio Lamborghini never promoted his cars through racing and motorsports: too much investment was needed. In 1987, instead the American property designed a Lambo Formula 1 engine, which was installed into Lotus, Larousse, Ligier and Minardi models. Even Ayrton Senna would have had that engine on his McLaren after having tested it, but political reasons made this impossible. 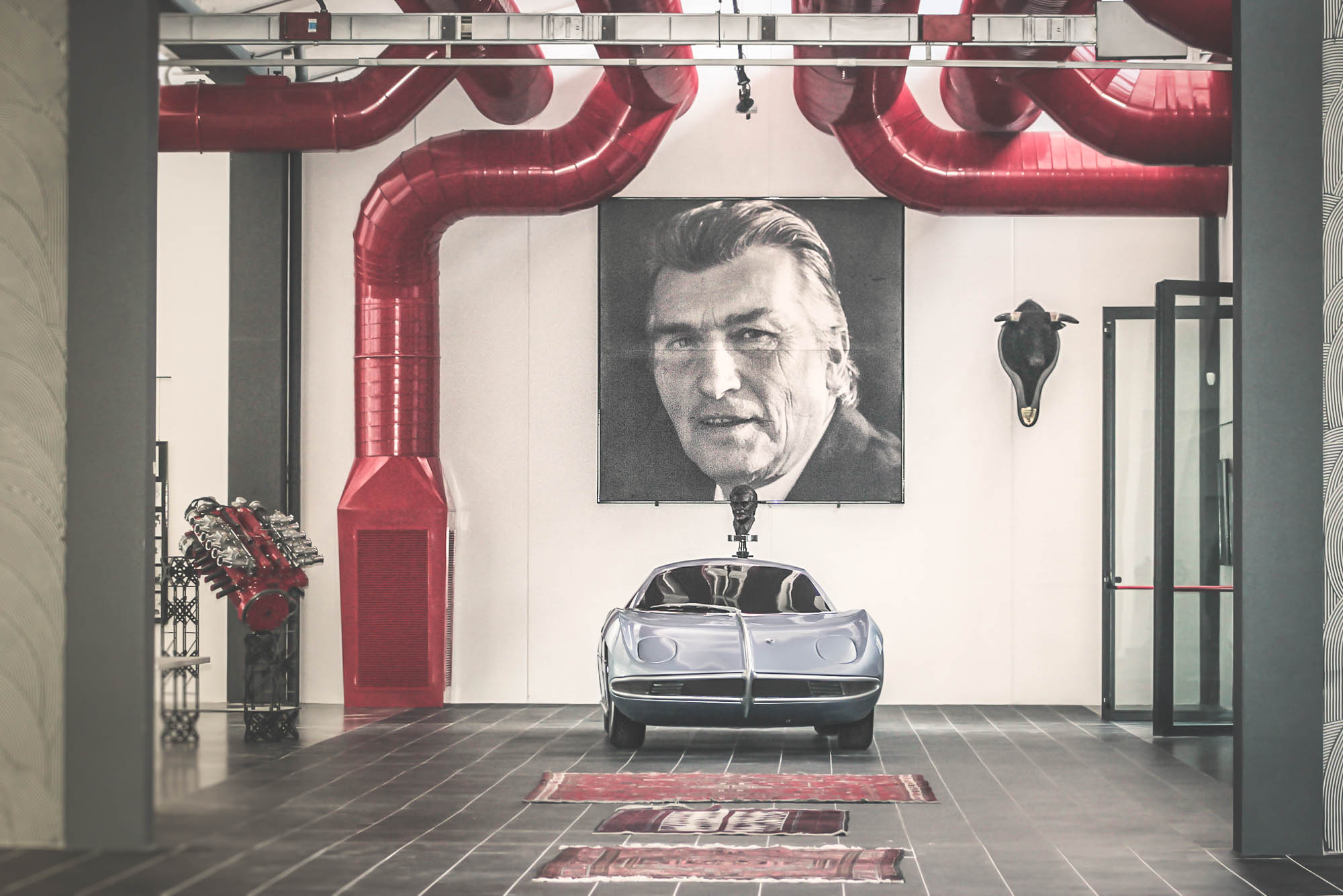 On the contrary, Ferruccio raced with motorboats: he did the first test by mounting a Miura engine on his Riva Aquarama and, thanks to positive feedback, he decided to start designing marine engines. He gained 4 world records on the water: 110 km/h in 1968 for 1,3,6 and 24 hours.

This tradition was carried on by the 8200 cm3, 1000hp engine, the most award-winning engine in the world thanks to its 12 victories in class 1 and its top speed of 200 km/h on the water.

Even if Ferruccio won his personal competition with Ferrari by the introduction of his first creation, after 50 years he proved himself to continually have great foresight.

A clever industrialist, and a determined and pragmatic a “simple farmer,” Ferruccio made it possible for the entire world to be able to enjoy his cars. 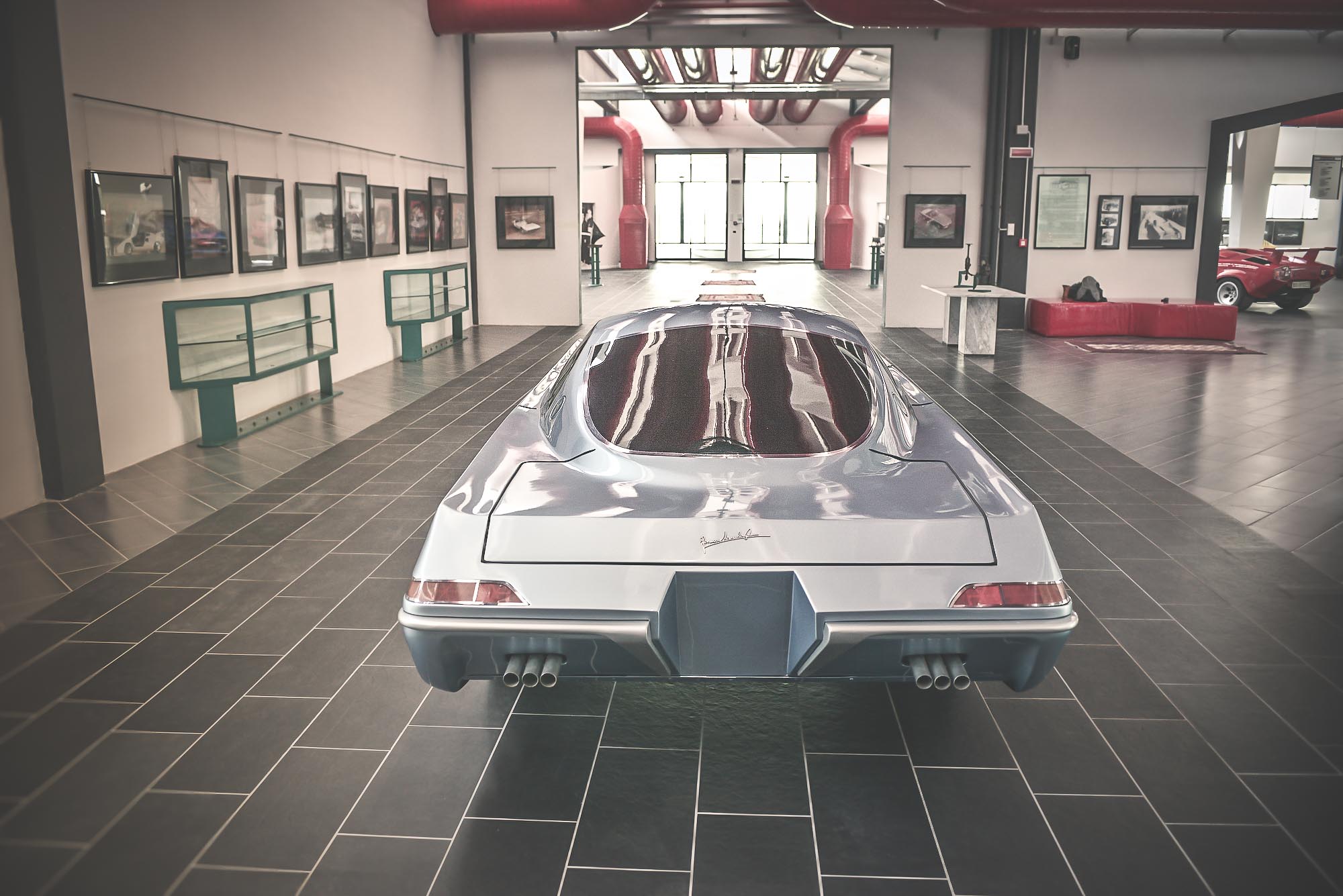