Bassano del Grappa has become the center of the world for lovers of classic and racing cars and ‘La Leggenda’ is the most intense focus point of all. Can you imagine how fun it must have been to attend such events in the 1980s? When weren’t reliability trials crowded with “chrono-holics,” those just focused on pressure-switches and computers that calculate average speeds?

Well, I can only imagine because I was born in the 80s, but I’ve listened to the tales spun by some of my older friends. I saw it for myself, only briefly, during the final years of that atmosphere in the early 90s, before the digital era fell definitively into our historic world. 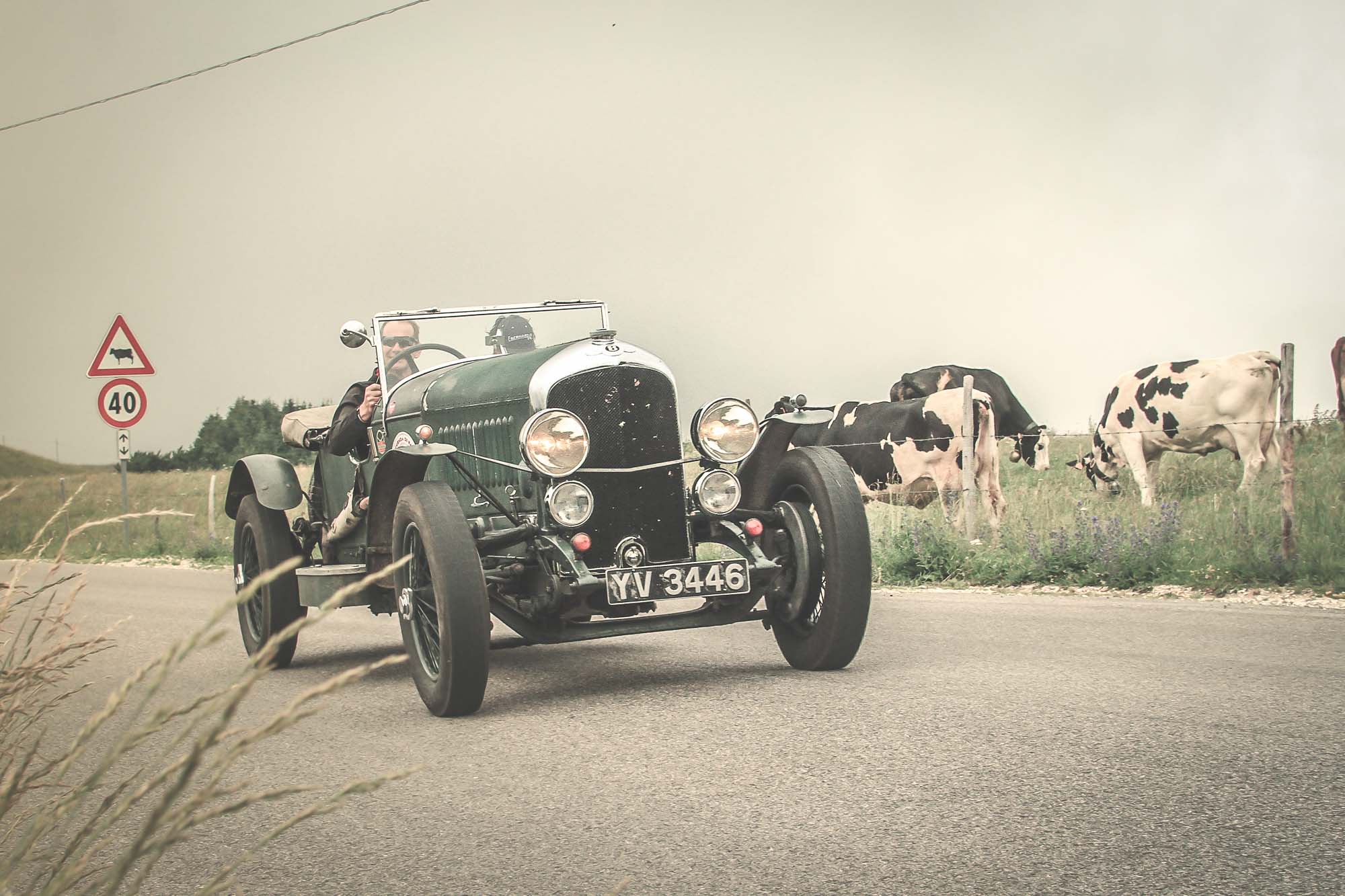 We used to love those carefree days (and nights) spent driving long distances. People had to concentrate while they drove through roads in the middle of nowhere, up and down the Alps, where inhabitants weren’t used to seeing other people. When their roads were suddenly flooded with classic cars, they were shocked!

But time passed ― and the pioneers of this racing world as well ― and classic car events started to be shaped according to the needs of the modern era. There are less spontaneity and freedom for events nowadays.

Luckily, a few things simply don’t change, allowing us to recall that wonderful past. Driving a pleasant 1959 Devin-Porsche through the Alps of the Veneto and Friuli Venezia Giulia regions for over 600 km, from the Dolomites to Sauris lake, we attended the 2018 edition of La Leggenda di Bassano ― Trofeo Giannino Marzotto.

“It’s a reliability test, just as they used to be: smiling and relaxed participants ― mostly foreigners ― just concentrating on driving their special cars, appreciating Italian foods and wines surrounded by our breathtaking landscapes.”

The ‘Leggenda’ is a one of a kind event, different for many reasons. The cars admitted are mostly open two-seater sports cars built before 1960. These are called “barchette” (Little boats) because in 1950 when Mr. Giovanni Agnelli (chairman of Fiat) saw for the first time his brand new Ferrari 166 Mille Miglia coach, worked by Carrozzeria Touring, he said, astonished: “It reminds me of a barchetta.”

“Moreover, a twin of the rare 166MM by Avvocato Agnelli raced with us during the ‘Leggenda di Bassano,’ driven by a smiling Spanish collector.”

Crews attending this kind of race are different to others; all of them are tough and but also sensible. These people don’t care about getting drunk under a cloudburst nor driving for three days with the wind blowing on their faces; that makes people buzzed.

“By the way, there are chronometers and even chronographs.”

‘La Leggenda di Bassano’ remains a reliability race, even if it has fewer time trials than other races, and even if those it has are fairly easy.

Second place went to the 1933 Aston Martin Le Mans and it’s crew, Roberto and Francesca Miatto, while the third step of the podium was for Maurizio Piantelli and Paola Montaldi with their 1926 Bentley Speed Model. 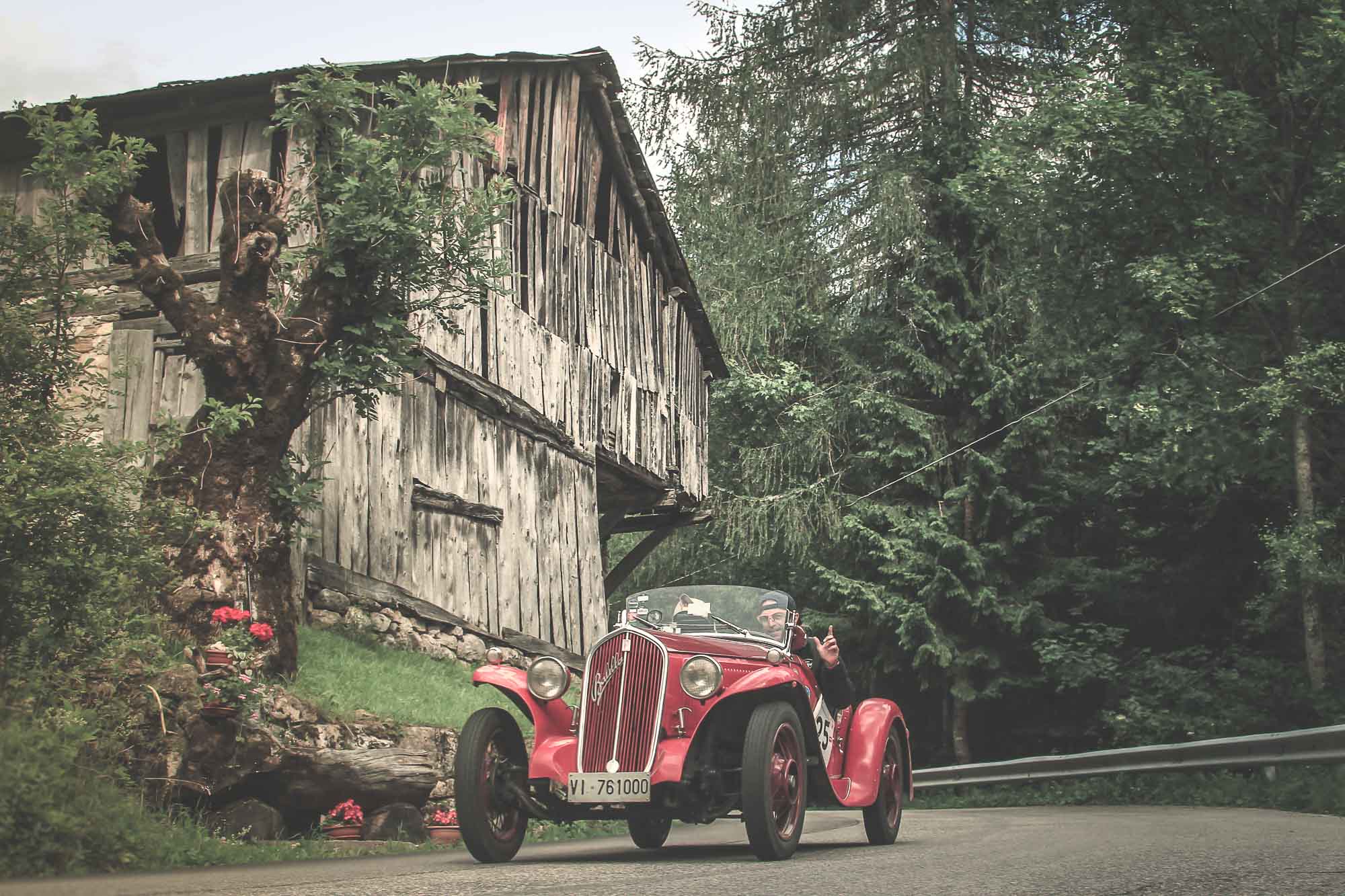 As well as the winner, another Italian car won a trophy, the Pakelo Heroes, won by a 1932 Alfa 8c Le Mans. We saw other Italian guest stars on four wheels: the Ferrari 750 Monza, Alfa Romeo 6C 1750 GS, both Touring and Zagato version ― of which we’ve talked to you about a little already ― the 8C 2300 Monza, a breathtaking Lancia Aprilia Sport, and two evergreen Maserati A6GCS.

For an enthusiast, you could get lost walking around cars by old and discontinued brands, such as OSCA, Cisitalia, Stanga, Siata, Ermini, Stanguellini and their handmade interpretations of a “Barchetta” based on the Fiat 1100 chassis.

Each one of these cars brings with them a special story to be told, a racing past from when they were driven on demanding roads, just like the one we drove the three days of the ‘Leggenda.’

“If you do something, do it the right way: you can’t sit in a pre-war car wearing modern clothing.”

Ten were the Bentleys, followed by Riley, Singer, Alvis, Allars, Elva and Frazer Nash. Drivers and co-drivers, of these cars, in particular, wore flawless period outfits, complete with helmets, caps, and accessories; it’s part of the game!

The platoon of 100 cars, from the oldest, the 1923 Bentley Super Sport, to the youngest, our 1959 Devin-Porsche, covered long distances each day, despite their age, through Passo delle Erbe, Val Badia, Dobbiaco with the Croda Rossa peak, then the Tre Cime di Lavaredo beside us. 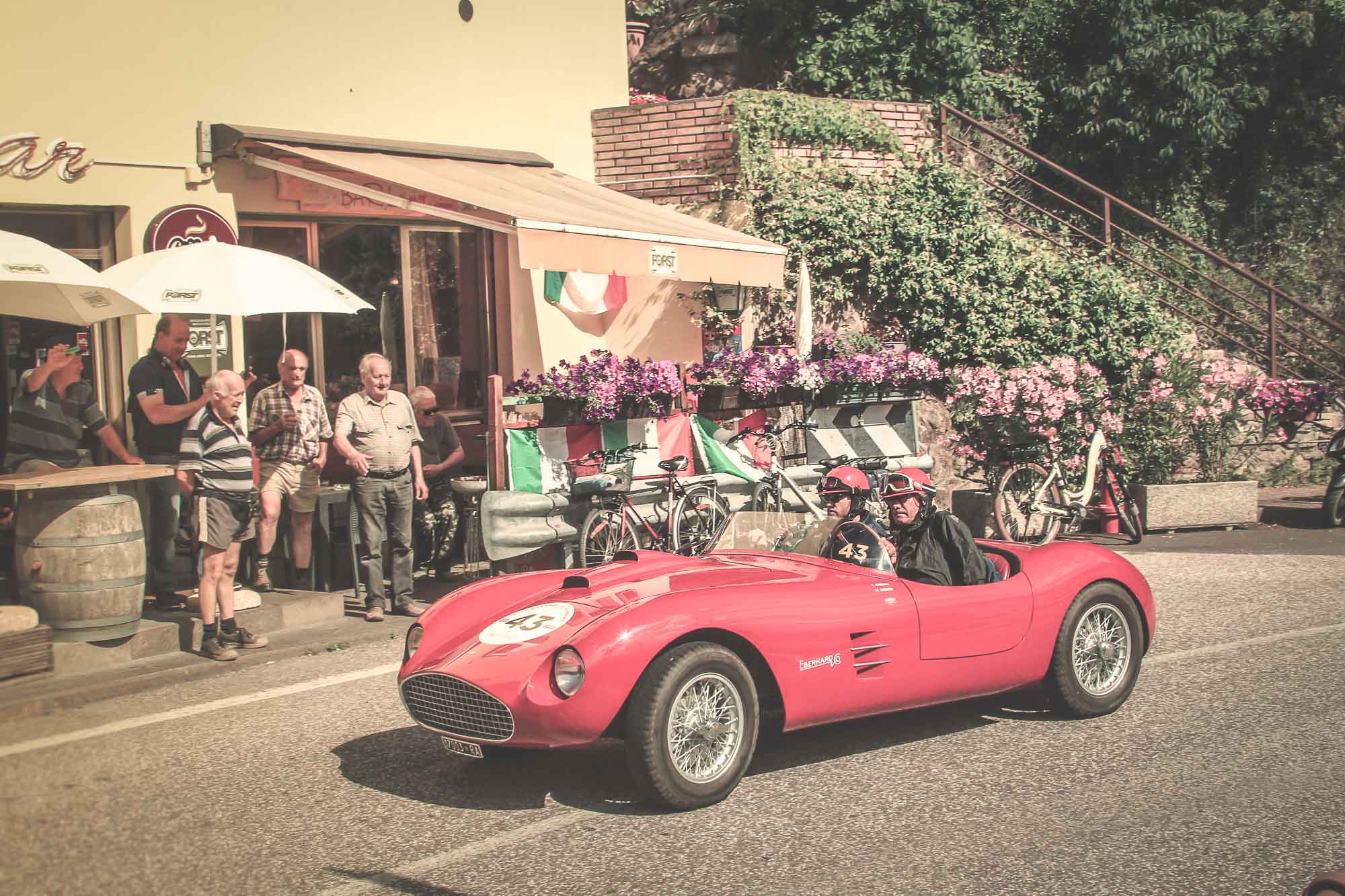 This year, the event was even more heroic than usual, because of the rain during the start of the race in Bassano: most of us didn’t have any soft top over our head so we drove under the rain. Even if Italians weren’t used to these weather conditions, foreigners didn’t care at all.

Before the start, many of them let the water invade the interior of their precious cars, careless of electrical problems and of getting their bottoms wet ― my teammate and myself, on the other hand, anxious Italians, quickly covered our Devin-Porsche and tried to preserve our dry seats.

The new millennium Barchetta and the forerunner of the race were the Dallara Stradale (we wrote about this car here), driven and esteemed by the World Rally Champion Miki Biasion, who is Brand Ambassador of Eberhard&Co. (and who happened to be born in Bassano), alongside Mario Peserico, Chairman of Eberhard Italia. 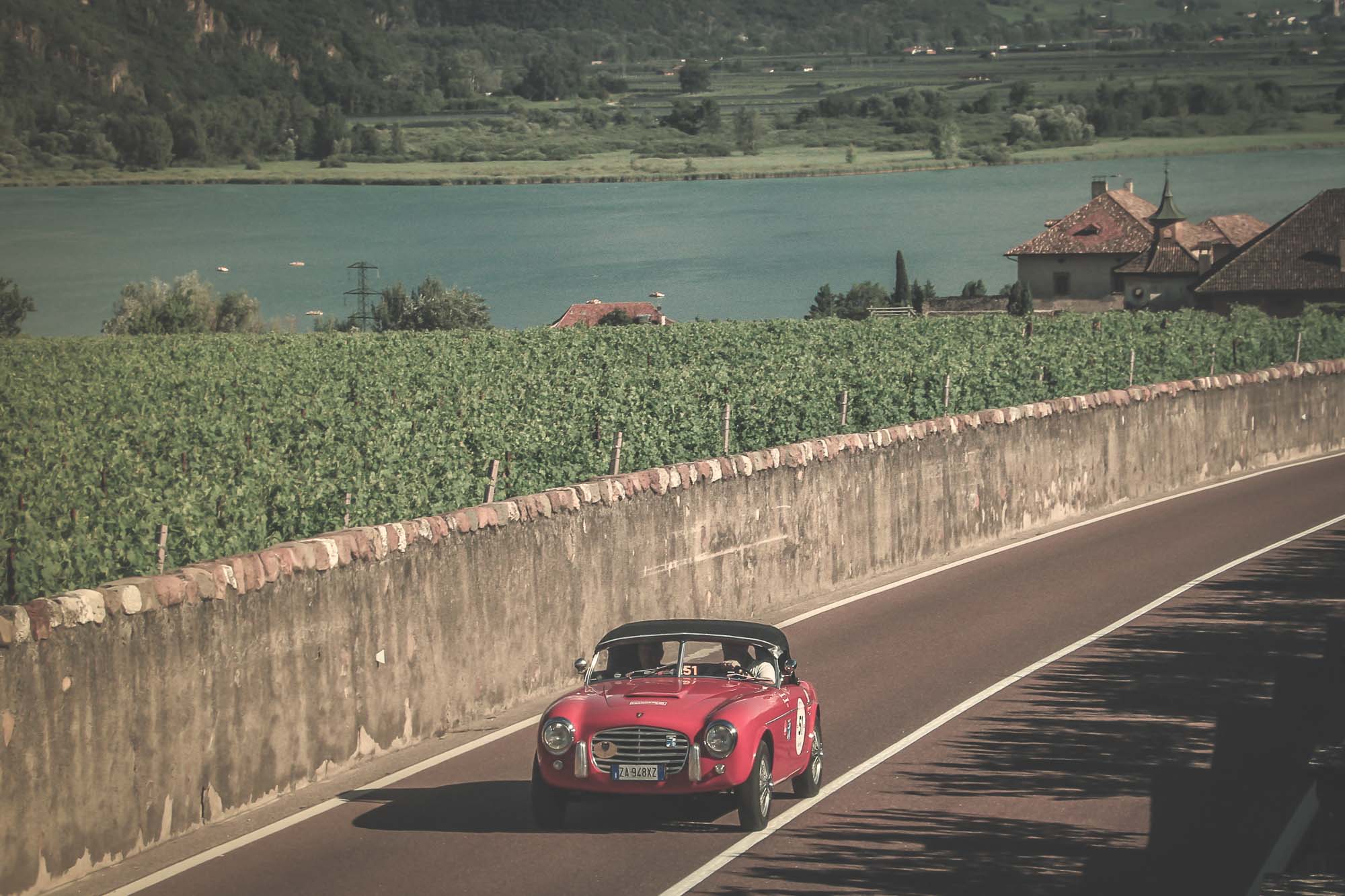 You may think that this event is just for old-fashioned enthusiasts, but you’d be wrong. Many co-drivers were children under fourteen years old, an encouraging message that tells us how many young people prefer the ticking dials of a stopwatch to than the touchscreen of an iPhone.

All the photographs are by ‘The Legend of Bassano’official event

The legend of Valentino Mazzola

The name alone is enough to recall memories, memories that are carved in Italian Sports History. Valentino Mazzola was the best midfielder of his time, the Captain of Torino FC, and above all, the Grande Torino. In May 1989, the journalist Gianpaolo Ormezzano wrote about him in La Stampa: “During the funeral, Barassi read the […]