Gin is once again the protagonist (also) in Milan. It happened on Monday September 9th at “Made in Italy”, the event created by Gino12 celebrating the most famous gin-based cocktail in the world, Gin Tonic, made by the Italian savoir-faire. Twenty-five selected producers “disclosed” their gin to the public. I also discovered a world, between tales on medical herbs and historical details.

As soon as I entered I was enveloped in a swinging atmosphere, a bit hipster, with jazz background music. I observed the gin bottles placed on the producers’ tables: colored, shiny or pastel colored, reflecting their creators’ style. I walked a few minutes to become familiar with the environment and the producers, all very experienced, with incredible stories – a small spoiler – I would have listened to for hours.

The world is a Juniper. Gin, too.

I approach Ginepraio which attracts me with its clear, clean, essential bottles. I find Fabio, a boy with “smiling” eyes who can’t wait to show me his world. “Gin is back in fashion” he explains to me in a calm way, as if he were sharing a story with me, “but perhaps not everyone remembers that 15 or 20 years ago, it was perceived badly. In the 90s, gin was really considered a third-grade alcoholic beverage, then something changed: someone started doing it well again, so the whole sector flourished“. 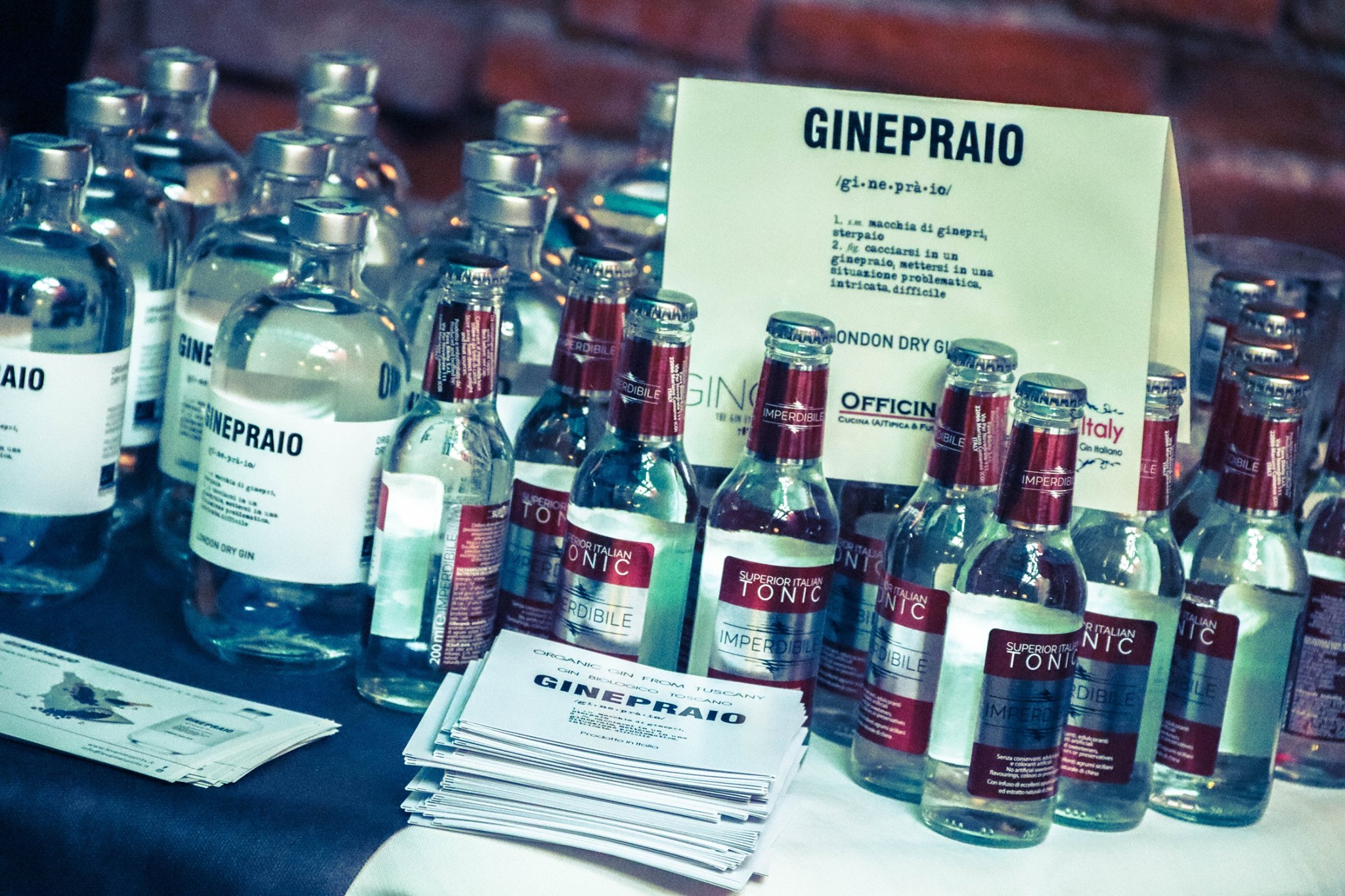 I ask him if it’s simple to find good gin on the market or if it’s the prerogative of a “class” of experts: “You can often find quality gin. Then, of course, if you are an expert you also like looking for the niche-distillery, the super-artisan producer, but drinking a good gin is much easier now than in the past“. Thanks to the new organic trends, to an artisan’s raw material and – last but never least – to the packaging. I also notice this by simply looking at the bottles on the stand: they have a clean and linear shape, which reminds me of something at the back of my mind. “We studied the packaging for two years, along with the gin recipe. The shape you see is reminiscent of a drip as a tribute to gin’s origins: it was born at the end of the 18th century in the Netherlands as a medicine to treat kidneys. We wanted to remember this originally “curative” aspect of gin through its packaging” Fabio explains.

Ginepraio’s research is also reflected in the ingredients’ quality, all organic – starting with wheat -, all Made in Italy. In Fabio’s (technical) words: “We use a juniper blend by doing research on the pH of soils, so we understood that we can have terroir focus not only for wines, but also for gin“. In this case Tuscany, between Chianti, Maremma and Valtiberina.

“Describe your most original gin” (nobody can stop me anymore): “Surely the Amphora Naviy Strenght, the first Italian Naviy Strenght, which takes up the history of the English navy. It was customary, until 1970, to pay sailors with a daily gin or rum ration. In order not to be cheated and to be sure that the distillate was not watered down, the sailors took the gunpowder and threw it on; if it was at least 57 degrees it would catch fire, otherwise they would mutiny”. I wish this moment would never end. “The Amphora“, continues Fabio after this absurd story that reminded me of Captain Hook, “was the first gin in the world to be aged in an amphora – a 370-liter amphora. We keep it there for 6 months, we cut it at 58 degrees, then the distillate softens and takes on minerality”. 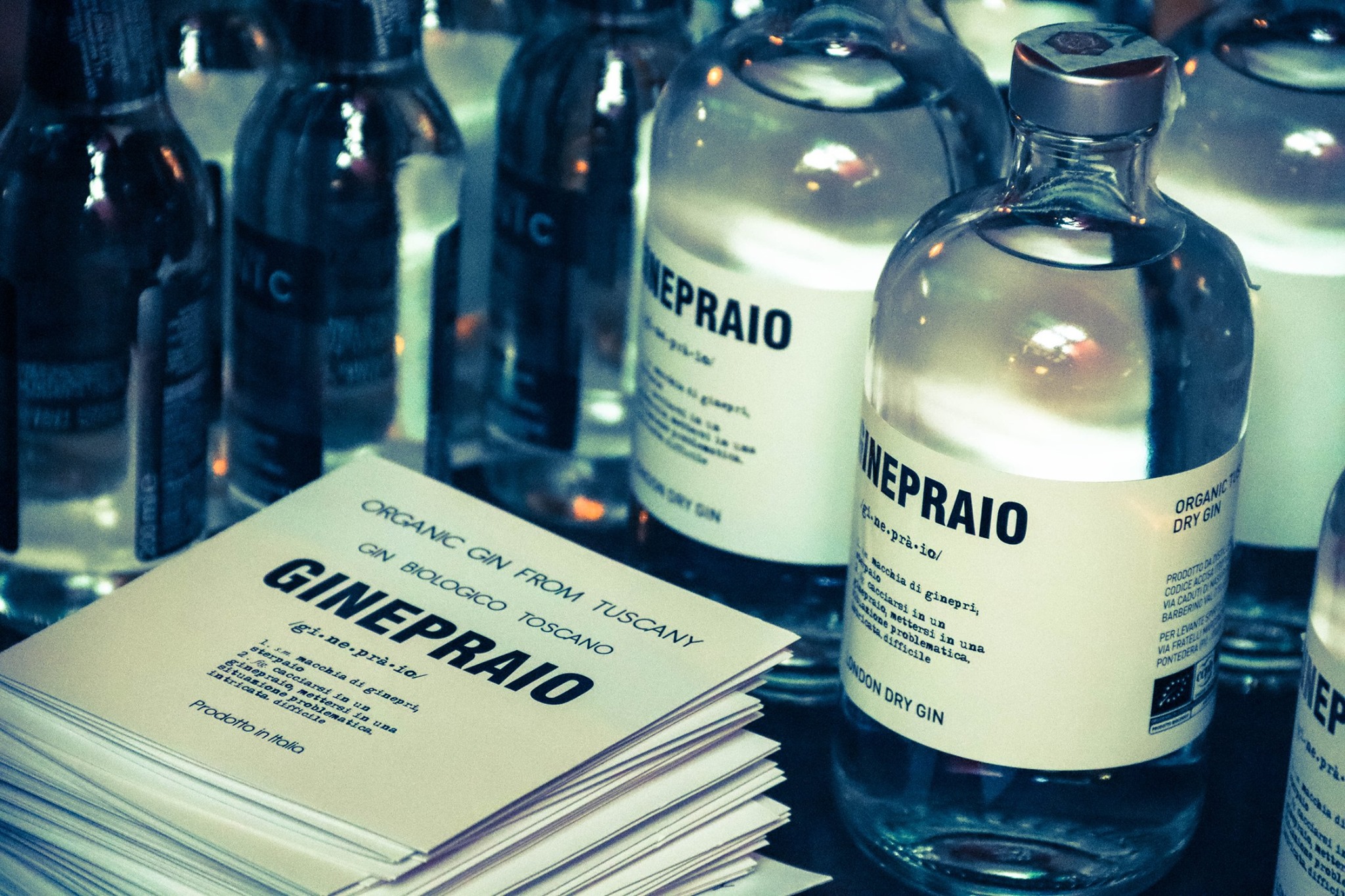 I don’t know if it’s due to the story or the atmosphere, but the gin Fabio makes me taste is really good: intense, aromatic, balanced in every nuance. At this point the question is a must: “In your opinion, which is the most famous cocktail with gin?” – “Without a doubt the Martini Cocktail: take gin, vermouth and with this you do the so-called in & out; you have to “dirty” the ice and remove it, then take the classic ice-cold cup, an olive or lemon rind, and you’re done. Don’t forget the iced cup: it’s the secret to make it taste better”.

Still intoxicated by Ginepraio’s story, I am captivated by the color of the sea that comes out of a glass pan: these are Insulae bottles, a gin produced entirely in Sicily thanks to an idea by Alfredo and Marco, two young men from Palermo who founded the label this year. Keyword? Sicily, in all its nuances, but above all in all its fragrances. “We use citrus – and balsamic – herbs just to reflect the aromas of Sicily, together with a peppery note and a floral note” – “Give me an example” – “Lemon of Syracuse, bitter-sweet orange from Catania, Ciaculli late mandarin, Bronte pistachio, Avola almond, Ispica sesame: you can find them all in our gin“. 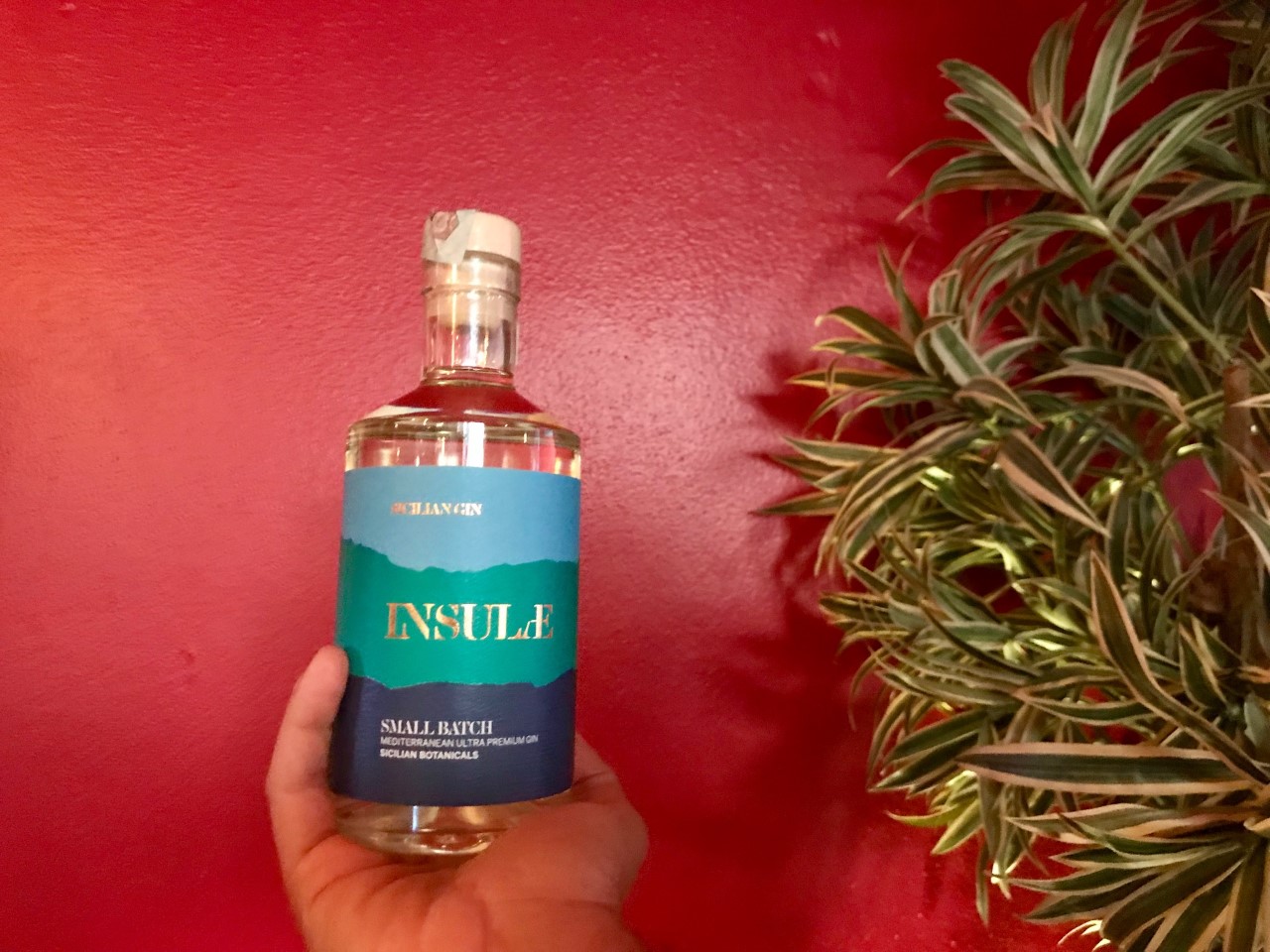 I won’t make him say it twice, and I taste it: it is a fresh gin, an explosion of citrus fruits; it is the sea of ​​Sicily and the summer sun. It’s the crisp air you can’t say no to. “We wanted to taste a territory, we wanted our customers to see the sea when they opened the bottle. We tried to “build” a story, you also see it in the three label colors: sky, earth and sea. Considering that the label has existed for less than a year, I can only congratulate the two boys. “We followed an upward trend, that of gin and labels linked to territories. Our label is Sicily, we have taken all its herbs, we have dosed them and we have obtained the definitive gin. We put great effort into our research“.

Sea water is the secret.

“If you wanted to drink a gin-based cocktail which would you choose?” I ask him amused (I like this world more and more) – “Gin and tonic. With a bitter tonic it is perfect. Then of course there are many variations: a simple one is the Gin Sour, with fresh lemon juice. The taste depends on the gin type, in our case the Sour explodes, it becomes something super-scented. We often use sea water, which allows the palate to perceive the herbs in the gin thanks to its flavor”. I can’t wait to try it.

When the pirates were afraid of the Genoese.

My journey through the gin flavors takes me to another land by the sea, Liguria, specifically Genoa. The boys at Ginuensis, the first Genoese gin, come from Geona. They produced it with the nine herbs selection. The story began with a passion for alcoholic beverages, and a classic “door to door” approach. Then the dream comes true, and it is bottled. “It was a tribute to the relationships Genoa had with foreign markets,” Francesco explains to me. “Did you know that the Genoese flag was given up to the British for adoption?“. No, but I want to know everything. “The Genoese fleet was the most famous, the English ships were instead the most attacked, so the English queen decided to ask the Genoan doge to use the Genoese flag to avoid being attacked by pirates“. Tonight I could write a book; meanwhile, I ask for more details. “The label was produced entirely by a calligrapher, then it was digitized.” All I have to do now is taste it. 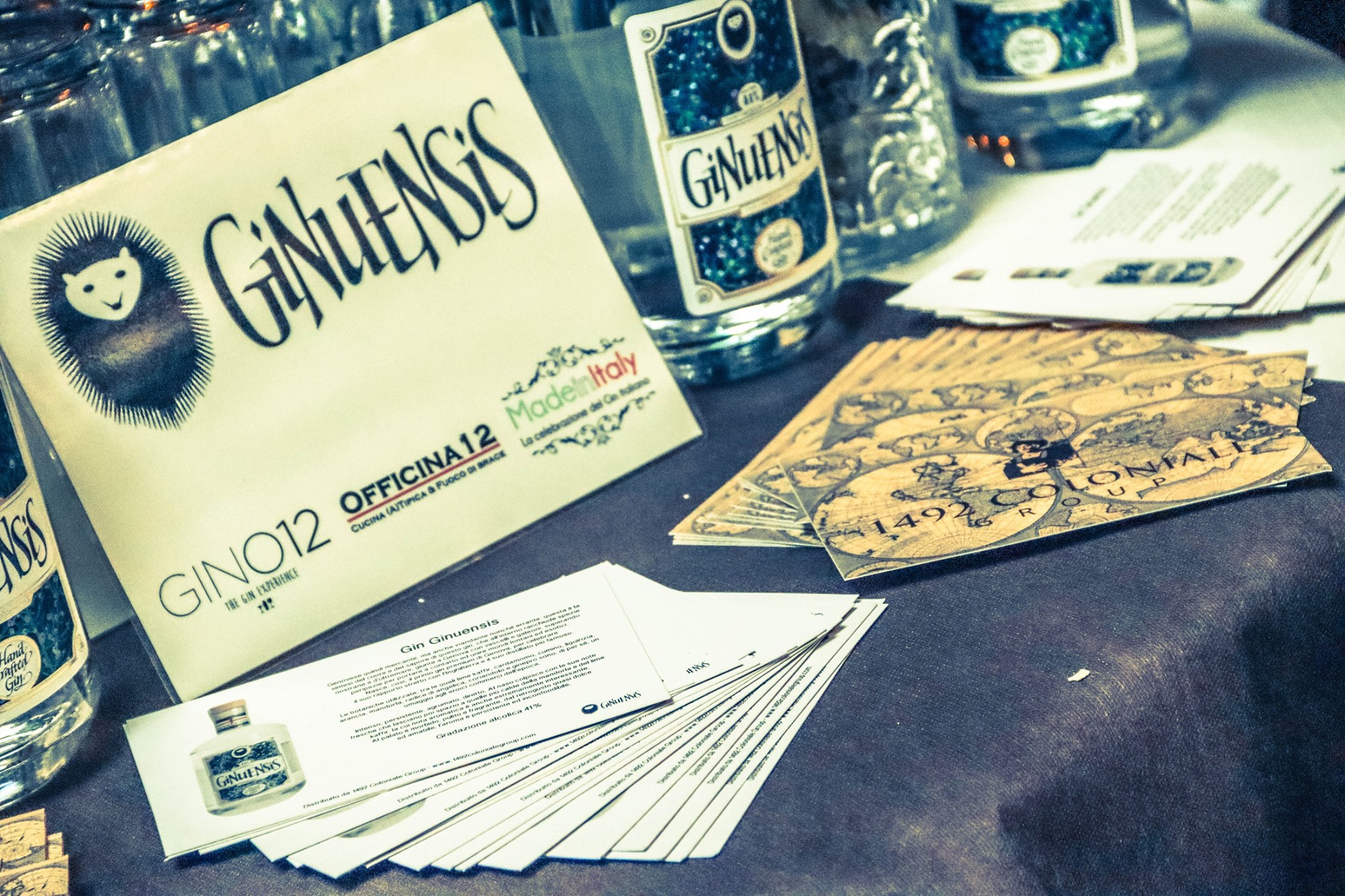 After the first sip, Gin Ginuensis is intense. When I stop for a moment, the citrus flavors come along, then the warmer ones. “That is almond, which with lime kaffir, an oriental citrus, makes it aromatic and persistent”. “Why the kaffir lime?” – “To pay tribute to the businesses of the time. To unite distant worlds. To tell a story and be part of it”.

Exactly what I felt, even if for a few hours: being part of a world where passion and research are the protagonists, where you need courage to create and culture to appreciate. A Made-in-Italy world where the most original flavors also come from a hint of madness. Because, after all, real gin is also this.

Cover photo and photos in the text by Gino 12 Milano and by our Valeria Di Terlizzi walking by.

«The most resistant element is not cement; nor is it wood, stone, steel or glass. The most resistant material in construction is art.» The Pirelli skyscraper and the ultra-light chair. Cathedrals and the “diamond” car. The urban districts and the scenographies for La Scala. The “exact” houses and the peculiar ceramics. In a career over […]