An unconditional love for beauty, a passion for culture and art in all its forms, and a revolutionary spirit. These characteristics all point to one name: Gianni Versace. The Italian fashion designer and businessman had the fortune and merit to be an integral part of the fashion golden age. Gianni Versace collaborated with the likes of Valentino, Gucci, Moschino and Armani, to define the Italian prêt-a-porter.

It’s the classic path of a self-made-man: at barely 25-years-old he decided to move from Calabria to Milan in order to pursue his goal of becoming a professional tailor, a passion he shared with his mother.

At the beginning of his career, he was first signed onto brands such as Genny, Callaghan and Complice, but his real stepping stone was on March 28th, 1978, at the Palazzo della Permanente, where the fashion designer presented his first collection, called Versace. These were the years his brand was saturated with leather and metallic dresses, that soon became ubiquitous with Versace.

Admixture and provocation ― these are the keywords that grasp the essence of the brand, and the mind of its founder. Versace is all about the mixing of styles, textures, colors; clothing models in extravagance, originality, and pure eccentricity. 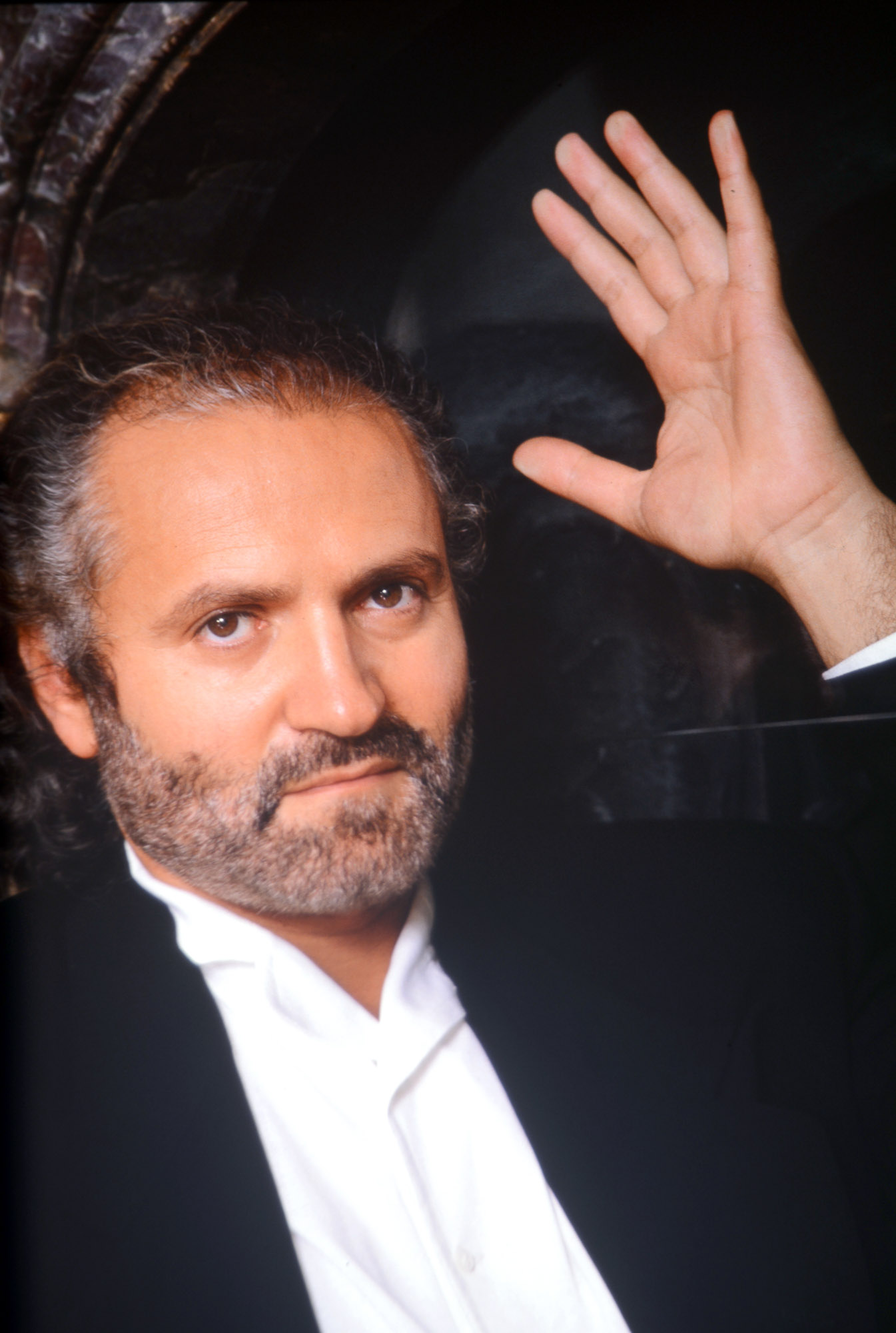 However, to make his creations more interesting and distinctive, Versace also made them provocative. Very short dresses, transparent fabrics, leather items; Versace created a collection dedicated to the bondage universe. He was the creative vision behind the safety pinned black dress that eternalized Liz Hurley in Four Weddings and a Funeral.

“I dress my women as if they were suspended between sky and ground, wrapped in soft draperies and contained in stiff bustiers.”

As a reference point and source of inspiration, art was a real-life partner for Gianni Versace. This companionship began from childhood, in Reggio Calabria, where he breathed the Magna Grecia’s air, and continued his whole life, with collaborations with contemporary artists such as Pomodoro, Rotella, and Veronesi.

With Veronesi, he had the pleasure of working on the stage costumes of Richard Strauss’ Josephslegende at Scala (the main theatre of Milan).

Art and theatre, therefore, became essential forms of expression that, together with fashion, contributed to the creative freedom and experimental nature that have defined Versace’s style.

“While I worked starting from a piece of art, the work itself was so inside me that the ideas were bubbling up spontaneously ― I wasn’t even thinking about them.”

As an enthusiastic collector always hungry for more art, in 1986 in Paris, Gianni Versace received a gold medal from French President Jacques Chirac. This recognition has been given to other very few foreign personalities of culture.

His passion for art was also reflected in his personal life: It has been said that in order to furnish Casuarino House, Versace spent over thirty billion Euros, including purchasing a Picasso.

Others tell the story, that, in order to update the red clay roof shingles of the 1930’s-era Miami house, Versace sent some of his trusty men around the world searching for shingles built exactly in that period, in order to install them on the roof along with the original ones. His sister Donatella, who is today in charge of the company, remembers:

“We can say that, for my brother, art was a never-ending stirring. As with his other fields of inspiration, he never copied a thing: he reinvented everything, and projected it to the future.”

At the root of this evolution though, the designer’s creative driving force was above all, love. Love for: beauty, fashion, art, culture, women, and models. Journalists from all over the world defined him as “the fashion designer who invented top models.” He did this by virtue of his sincere friendships with his models, that he loved to walk on the runway at the end of his all fashion shows.

“It’s thanks to him that Naomi Campbell, Linda Evangelista, Claudia Schiffer, Carla Bruni, and Cindy Crawford became icons in the 1990s. They were real advocates of the Versace glamour style.”

Gianni Versace dressed the “it” people of society ― everyone from rock personalities to princesses. With professionality and affection, he clothed important women and men for all sorts of occasions, festivals, and special events. He dressed the likes of Oscar actresses, celebrities, singers from all over the world of the caliber of Madonna, Prince, Elton John, Sting, Hugh Grant, Liz Hurley, and Lady Diana.

As a matter of fact, he introduced the metallic shirt into the fashion world, which led to all the most famous Hollywood stars wearing his masterpieces on red carpets. There aren’t many people out there who can count such wide fan base and important friend group. If you were wondering about his secret ― how could he have achieved such success? e was a lover of life, a truly honest and charismatic kind of person. That’s how he earned the stars’ trust.

And the contrasts themselves shaped his multifaceted personality: on one side, fashion designer-superstar surrounded by celebrities and smiling in the newspapers and, on the other side, a shy and reserved man in the shadows. He was an expansive artist, sunny and challenging, but also sensitive, delicate, and kind-hearted.

A charmer and star guest in exclusive parties, but also a literary character and passionate observator in the most renowned museums in the world: who really was Gianni Versace? Through his brother Santo’s words:

“Gianni was a child, a revolutionary, and a poet. He relished the joy of living life and the prospect of the future.”

In this definition lies the prominent aspects of the stylist’s personality: curiosity, creativity, sensitivity, genius, and an innovative spirit. Daring and provocative, Gianni Versace is remembered as a man who embraced art, fashion and life. The life same that was ripped out of him in Miami, on July 15th, 1997.

The fashion designer was returning to his dèco style villa, on Ocean View Drive, after he had bought a newspaper at News Cafè, when shots fired by serial-killer Andrew Cunanan took him away forever. (Andrew Cunanan committed suicide a week later). He was taken away from his family’s affection, in particular, his brother’s and sister’s, from the catwalks but also from the streets, and above all, from the people who loved him so much.

His death that was hugely shocking in both Italy and America; so great, that it became a storyline in Ryan Murphy’s TV series American Crime Story: The Assassination of Gianni Versace. Most affected by the designer’s absence was, and still, today is, his sister and best friend, Donatella Versace:

“All I learnt about fashion I owe to Gianni. Gianni was a very generous genius. He shared his knowledge with others: this is something that not everyone does. I learned to try always new things, risking a lot, but without any fear of criticism.”

It is no wonder that a personality of this kind managed to become the stylist and friend admired and loved by everyone. His death has surely taught something to the fashion world, but also simply to the world. He showed that is possible to be a wildly successful man while still remaining true to yourself. His fundamental characteristics ― humility, good humor , and kindness ― are qualities that only great men can boast.

One thing is certain: it is not for everyone. The dandy style, probably “the style” par excellence, does not admit mistakes. Of any kind. After all, style, as we know, is not something that is easily constructed. It is innate, we each have one of our own. It is therefore useless to force upon us […]

The Great Beauty: the style of Jep Gambardella

In May 2013, The Great Beauty was presented in a worldwide preview during the Cannes Film Festival. From the reaction of the audience, we could already feel its monumental artistic significance. The film is a ruthless portrait of the refined emptiness of contemporary bourgeois society; a wonderful gallery of images of a dying Rome, and […]