Ten years after Il Divo, an undisputed masterpiece focused on Giulio Andreotti (and five after The Great Beauty of which you may have already read), the Neapolitan director chooses to tell the story of Silvio Berlusconi, once again played by favored actor, Toni Servillo. ‘Loro’ (‘Them’) is the latest film by Paolo Sorrentino, although perhaps it’s better said: the latest two films, by Paolo Sorrentino.

This oxymoron seems to hover about the whole film, in which reality and fiction coexist and where realism flows into invention and vice versa. The Oscar-winning director, stylistically less baroque than usual, creates a real farce, a surreal world and grotesque characters in an attempt to imagine and perhaps interpret a historical moment between 2006 and 2010, apparently a decadent but lively time for Berlusconi.

Wild parties, reminiscent of Scorsese’s ’Wolf of Wall Street’, take place, with a climax that reaches its peak in a deluge of MDMA and an excess of female nudity. ‘Loro’ slowly approaches “Him”, as Berlusconi is called for the most part of the film. Sorrentino’s choice is to emphasize the human aspect more than the political one.

“Communists have swiped the government, my children, my companies, I have only Veronica, who looks at me as if I were the origin of all evils.”

The “doer,” who no longer has the opportunity to do. A husband who wants to reconquer his wife, an extraordinary Elena Sofia Ricci who fits perfectly into the role of Veronica Lario. To the end, he wears makeup and dresses like an odalisque to surprise his bride for her birthday. He is also a grandfather who gives lessons to his nephew.

“Do you know what the great English scientist Isaac Newton used to say? Appearances deceive only the mediocre ones (…) Truth is the result of the tone and conviction with which we affirm it.”

This is the motto that contains all of the so-called “Berlusconism” and, perhaps, the entire essence of the work as a whole. Yes, because ‘Loro’ is a multiform prism divided into two distinct but complementary chapters, one reflected into the other.

A titanic and courageous project that should be viewed and evaluated in its entirety. “They” are those who matter, it is said. However, they are also those who live in the myth of Cavaliere (aka Berlusconi himself), of “Him”.

And he is absolutely at the center of the second part of the diptych, destined to see his certainties fall apart, especially with regards to his private life. And “We” can only roll up our sleeves and remove the rubble of the ensuing chaos. 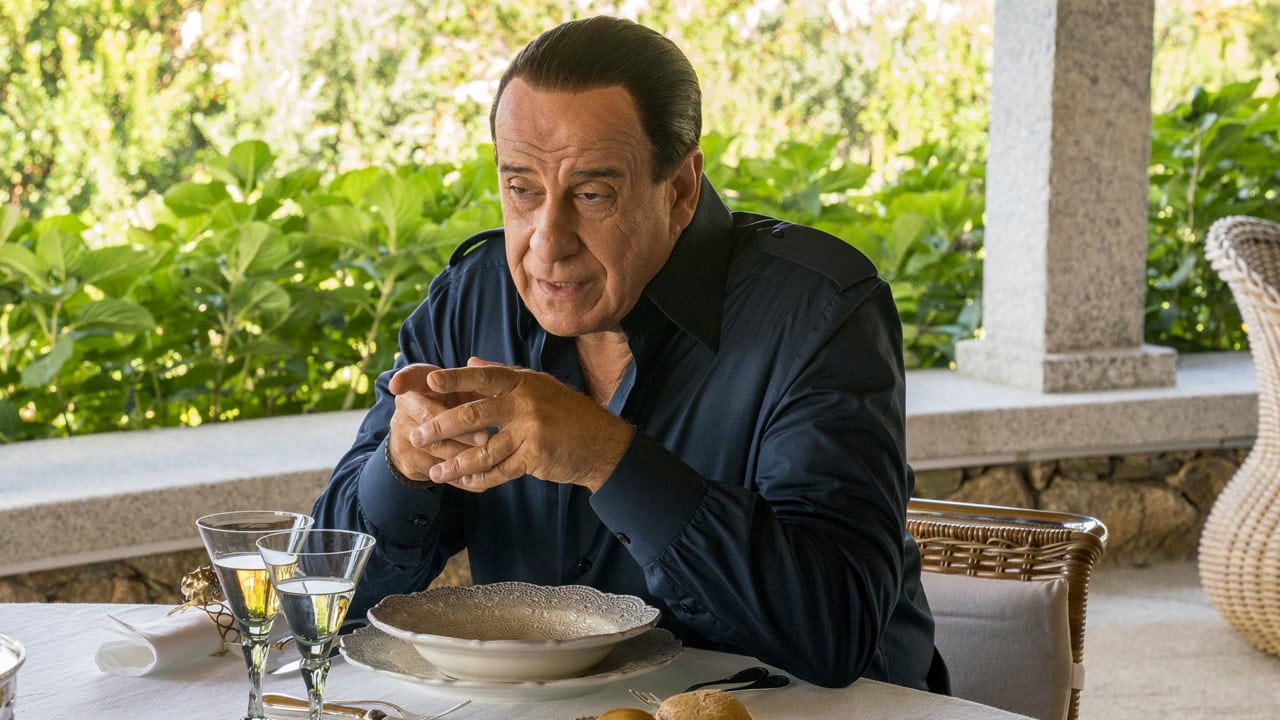 With greasepaint, makeup and a toothy smile, Toni Servillo manage to perfectly immerse himself in the role of the former premier, portrayed in a sort of caricatural way, as a result of the exaltation of those aspects already extensively represented by the media.

Following the notorious Berlusconi’s iconography, we find some of the aesthetic stereotypes related to him, such as the now famous outfit he showed in Porto Cervo,

“wearing trousers and white shirt with the bandana on his head; the constant presence of blue, his favorite color in all his garments, as the film itself shows us in a sequence where all clothes hanging on the washing line are all alike, all blue; the double-breasted jacket, imposing and recurring in the Cavaliere’s wardrobe; the heel inside shoes in order to make him look taller.”

Attention to aesthetics is never overtly drawn attention to but lies in the details, and it is not an end in itself. In the sequence of Gai Mattiolo’s runway show, for which the designer has made available his archive of clothes from the early 2000s, Sorrentino manages to highlight the logic of a sick world, in which everyone is attracted to the figure of Berlusconi, set in the lodge like a king. 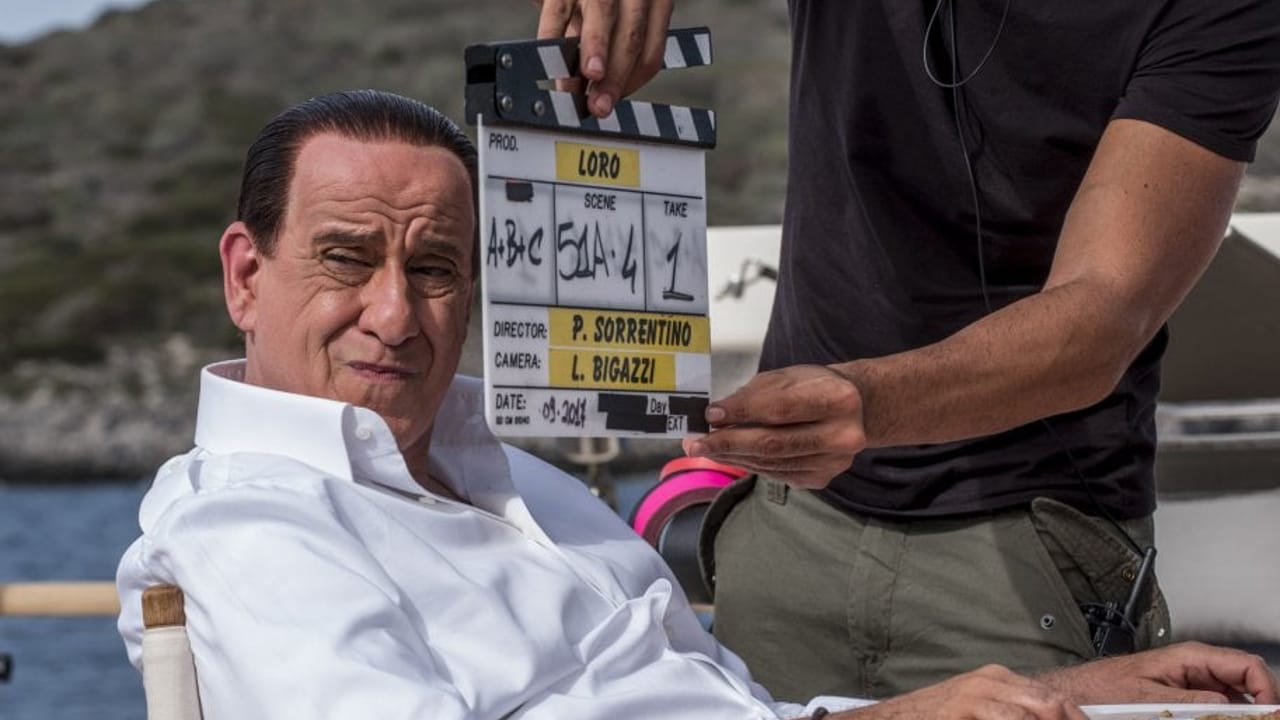 This system creates a grotesque and distorted “Great Beauty”, but it is right there that we see the director’s true ability to turn what is excessive and borderline into poetry, thanks to his refined style of filming.

“Berlusconi is surrounded by characters like Paolo Spagnolo (Dario Cantarelli) ‘the man who knows,’ omnipresent and always wearing an impeccable white suit.”

Or Santino Recchia (Fabrizio Bentivoglio), a minister with unlikely shirts but ready to return to wear Battistoni ― as we will talk about a short while in an article on The Talented Mr. Ripley ― a movie whose character is taken as a symbol of what Italy was showing to the world in those years.

Lights on the dancefloor: we can listen to jazz, fox or charleston; the air is crisp and the ballroom’s protagonist is an athletic, wiry and distinct-looking dandy.

The Great Beauty: the style of Jep Gambardella

In May 2013, The Great Beauty was presented in a worldwide preview during the Cannes Film Festival. From the reaction of the audience, we could already feel its monumental artistic significance. The film is a ruthless portrait of the refined emptiness of contemporary bourgeois society; a wonderful gallery of images of a dying Rome, and […]