Into the songs of Domenico Modugno

How much can we know about a songwriter through his songs? These lyrics contain memories, sometimes mixed with imagination, but always stemming from real life. Like… Domenico Modugno’s life.

It was a warm winter day: January 9 1928, when Domenico Modugno – the father of Italian music – was born in Polignano al Mare (BA). 230 written songs (and many of them sung), 38 films, 13 theatrical performances, 4 victories at the Sanremo Festival, the first in 1958: the year Modugno emerged with Nel blu dipinto di blu and released Volare, one of the most famous Italian songs in the world, according to SIAE even the most performed worldwide, to this today. 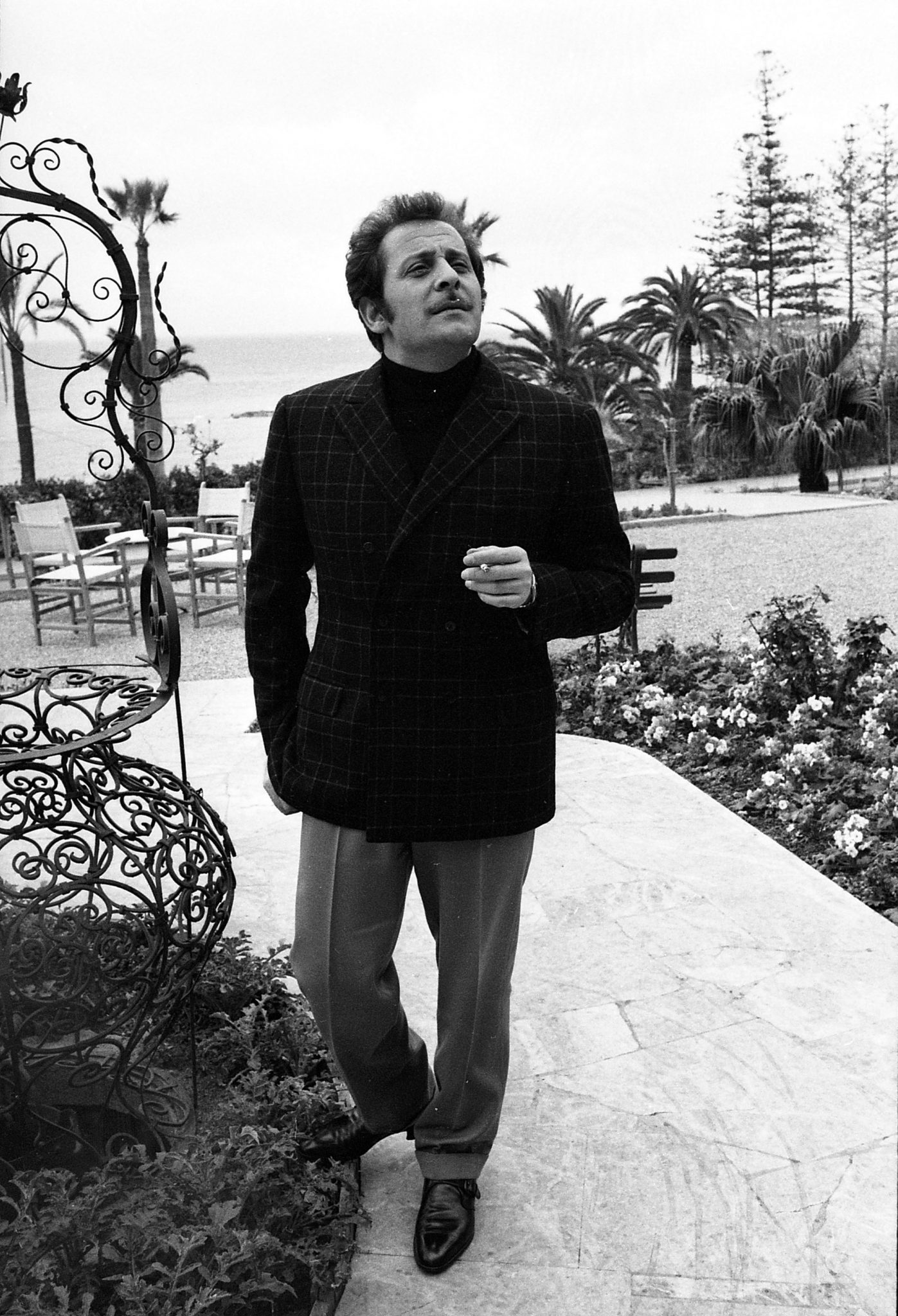 Written with Migliacci in the Summer of 1957 when Modugno collaborated with his friend illustrating children’s stories by Gianni Rodari, the genesis of Nel blu dipinto di blu has many different versions: inspired by a walk or a missed seaside trip, or by the blue sky of Rome or by a surrealist painting? Time has crystallized various tales, but Franca Gandolfi, Modugno’s widow, has confirmed Migliacci’s version which reveals that that “blue” comes from two paintings by Marc Chagall, Le coq rouge dans la nuit and Le peintre et son modèle, which hung on the walls of his home.

«Di blu m’ero dipinto per intonarmi al cielo,
lassù nel firmamento, volavo verso il sole,
e volavo felice più in alto del sole, e ancora più su,
mentre il mondo pian piano spariva lontano laggiù,
volavo nel blu, dipinto di blu…»
—
I painted myself blue to match with the sky,
up there in the firmament, I was flying towards the sun,
and I flew happily higher than the sun, and even higher,
while the world slowly disappeared, down there, far away,
I was flying in the blue, painted in blue…

On the wave of the space race that began in October 1957 with Sputnik and in the spirit of Italian in economic boom and Dolce Vita in Roma, freedom guided the Country and everyone had a big dream: “to fly”. And “Volare” is the keyword of the song, that became part of its refrain and gave Modugno the nickname Mr. Volare. 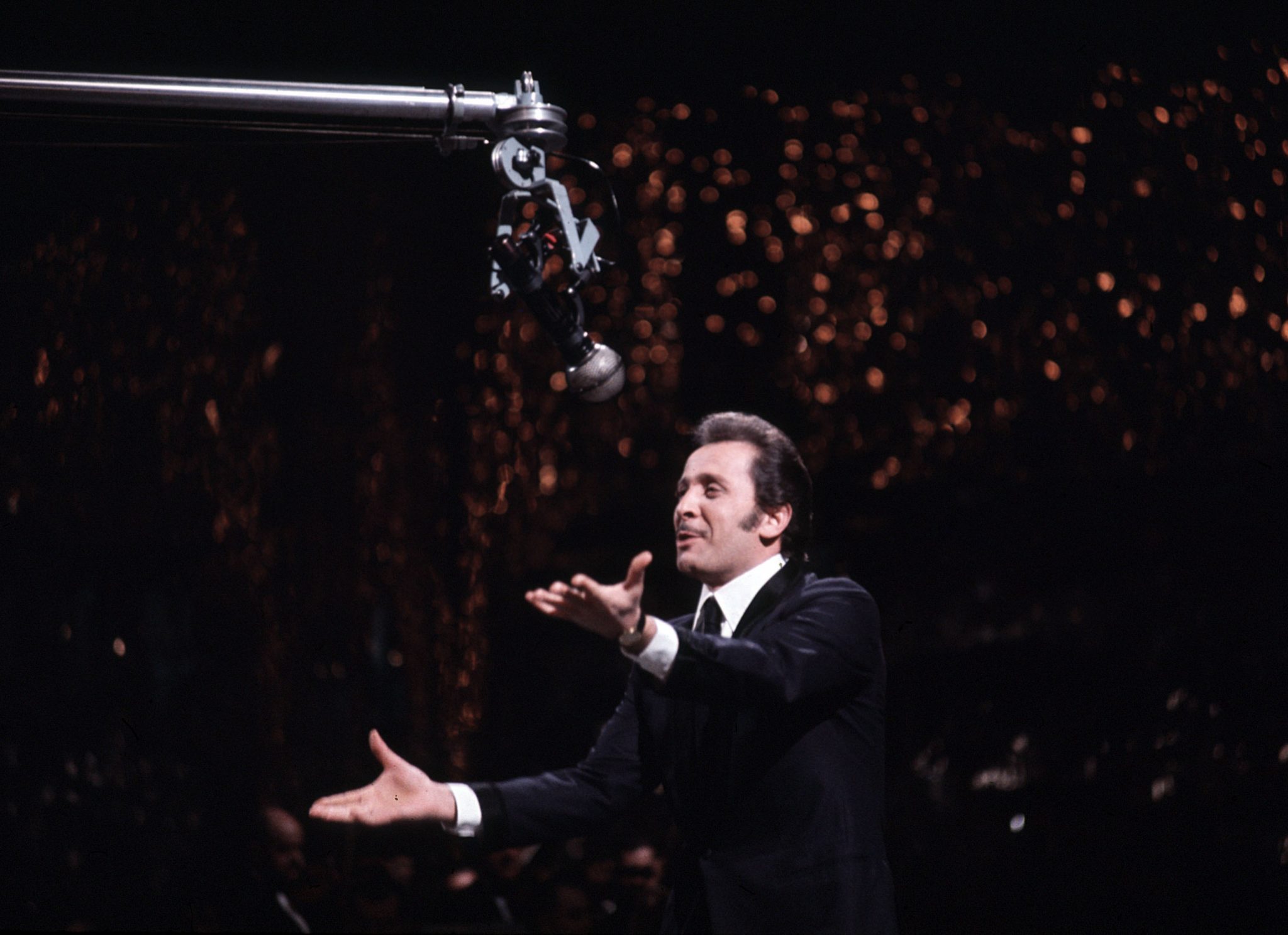 Volare oh oh, the most recognizable part of the song, was born by chance, after Modugno was observing the blue sky from the window of his apartment in Piazza Consalvo in Rome with his wife Franca. Ironically, Domenico Modugno should not even have sung on the Sanremo stage (he was merely credited as the songwriter), but at the Festival rehearsals some singers refused to sing a song that seemed, according to Gorni Kramer, “madness without style”: Modugno decided to get on stage, becoming the first singer-songwriter in the competition, kicking off the Revolution.

Observing the farewell of a couple on a rainy day at Pittsburgh station in Pennsylvania, Modugno has the first idea for Piove.

After winning the Festival, in May 1959 he won the first edition of the Grammy Awards, as Record of the year and Song of the year, making Volare the first record in Italian history: in 1958 the single sold 800 thousand copies in Italy and over 22 million around the world; its many covers (from David Bowie to Ella Fitzgerald, from Dean Martin to Louis Armstrong) speak volumes about its success global success: Modugno went on tour in America in 1958.

«Ciao ciao bambina, un bacio ancora
e poi per sempre ti perderò;
vorrei trovare parole nuove
ma piove, piove sul nostro amor»
—
Hello hello baby, another kiss
and then I will lose you forever;
I would like to find new words
but it rains, it rains on our love

Observing two lovers kissing their goodbys on a rainy day at Pittsburgh station in Pennsylvania, Modugno first thought of Piove. For the writing he involved Dino Verde, with whom he had already worked on Resta cu ‘mme. He composed a music that repeated the pattern of Nel blu dipinto di blu: a slow introduction, accompanied by an organ, and an airy refrain. The similarities with Volare do not end here: Piove is also known not only for its title but for the phrase “Ciao ciao bambina”, and this song replicated Volare’s success, winning the Sanremo Festival in 1959 and becoming one of the his most well-known songs.

«Dio come ti amo
Non è possibile
Avere fra le braccia
Tanta felicità»
—
God, I love you so much
It is not possible
To have so much happiness
Here in my arms

Modugno’s success continued in 1966 with Dio, come ti amo, performed with Gigliola Cinquetti at the Sanremo Festival. He also pursued a career as an author and actor, performing in the film by Pier Paolo Pasolini Capriccio all’italiana, in the episode What are the clouds?, singing the song of the same title.

Modugno recalled his first encounter with Pasolini by saying: «It was very nice … Playing Che cosa sono le nuvole, a song born from the title of the film, that we wrote together. It’s a strange song: I remember that Pasolini created the text by extrapolating a series of fragments from Shakespeare‘s Othello and then patched them together».

But Modugno’s career also saw him fail: he was eliminated from the 1968 Sanremo Festival with Meraviglioso. Perhaps, once he left the stage, the following year he wrote – together with Enrica Bonaccorti – the melancholic La lontananza:

Inspired by a letter that Bonaccorti had received from her boyfriend, the text was developed from the words that her distant lover wrote: La lontananza was born at the Grand Hotel Augustus Minerva in Cuneo.

Dreams, sea, and other worlds are all themes that have always played a great role in Modugno’s music: his last song, recorded with his son Massimo Delfini (Sai che c’è), describes his universe, with the two voices and a simple melody creating a magnificent dialogue between father and son, still current even today, as a testament for future generations.

Today, there seems to be a real possibility of dedicating the Ariston Theater in Sanremo to Domenico Modugno: we’ll see at the 70th edition of the Sanremo Festival, next month.

For the pictures thanks to Romano Gentile/A3/Contrasto and Ferdinando Scianna, Gelmi/RCS/Contrasto.

Throughout the decades, music and fashion have always gone hand-in-hand. Music stars have always paid enormous attention not only to their art, but also to their fashion and style, which inevitably was shaped by their personality. Therefore, it’s not a coincidence if clothes and shoes (and other fashion) came to inspire songs, many of which […]

There were those who told young people the exploits of “The heron” Fausto Coppi ― the man who beat Gino Bartali in a Tour of Italy one summer, 40 years ago ― meanwhile the daughters of the sexual revolution and American fashion style were enjoying the bikini. Let’s go back 40 years, to when radio […]