Our beloved Fabrizio De Andrè, the musician who made his mark in Twentieth-century Italian culture more than any other, would have turned 80 today (18 February). Here are a few unforgettable quotes, from interviews and especially songs, both classics and more experimental ones.

Released in 1966 as side B of the single Geordie, Amore che vieni, amore che vai is one of De Andrè’s most-played pieces: it talks about all loves, destined to pass, as the seasons do. It’s an essential, simple, universal song. A simple and essential masterpiece that outlines the De André poetics on several recurring themes of his lyrics: love, time, the end.

But why do we remember him using his nickname, Faber? It is much more than short-for-Fabrizio, it reveals a rear window onto his private life. One might think it is Latin for “doer, creator” of poetry, yet this nickname was given to him by the comedian Paolo Villaggio, a fellow Genoese and one of his great friends: he was thinking of Faber-Castell, the colored pencils De André used often and loved very much. 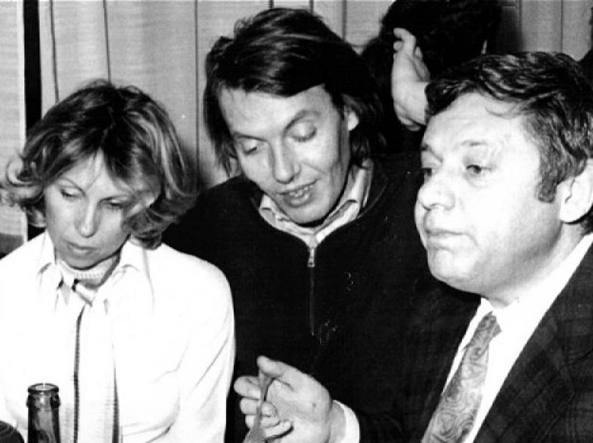 Before he died in 2017, Villaggio often spoke of their deep, intimate friendship, born in the mountains, in Cortina, in 1948: Villaggio was “a pissed off little boy who talked dirty,” De André said… “He liked me because I was tormented, restless and he was just as restless, only he had more self control“. They were two rebels, born in the ’40s into two well to do Genoese families. Together they wrote Carlo Martello ritorna dalla battaglia di Poitiers (Carlo Martello returns from the battle of Poitiers), published as a single in ’63 but released in Volume 1, De Andrè’s first album of unpublished songs that gave him lasting fame.

The same album opens with Preghiera in gennaio (Prayer in January), dedicated to his friend Tenco, who was found dead in his hotel room in Sanremo in 1967 during the Sanremo Festival. It is a secular prayer, merciful, more a poem than a song, with which De Andrè, addressing the theme of religion and death, asks that his friend be welcomed into Paradise along with all suicides:

His hometown Genoa is ever present in his songs and plays a vital role in many of them: think of Città vecchia (Old Town), with the story nei quartieri dove il sole del buon Dio non dà i suoi raggi (in neighborhoods where the good Lord’s sun’s rays do not shine), but also in Via del Campo (a song with the name of a street in Genoa), where De Andrè spent many days and nights, which ends with the lines: dai diamanti non nasce niente | dal letame nascono i fior (nothing is born from diamonds, / flowers are born from manure).

«Genoa is like a mother to me. It’s where I learned to live: today it seems to me that Genoa has the face of all the poor devils I knew in its alleyways, the outcasts I would then meet in Sardinia, the “beauties” from Via del Campo.»

Not to mention the district of Sant’Ilario, where today you can admire an incredible view of the sea, without forgetting his timeless piece Bocca di Rosa: the railway station from which the protagonist leaves is now no longer in use, but the neighborhood keeps the memory alive and in a shrine, there is a book sculpture on which an acrostic reads Bocca di Rosa.

Nella pietà che non cede al rancore,
madre, ho imparato l’amore.
(In that pity that does not yield to rancour, / Mother, I have learned love.)

1970. In the most fervent months of the contestazione (“potest”), De Andrè released an apparently counter-revolutionary album, giving life to an allegorical reinterpretation of Apocryphal Gospels, with which he staged the more human version of Jesus and the secondary characters who appear in Scripture. An egregious example is Il testamento di Tito (Tito’s will), the piece that, through the point of view of the thief, retraces his life as a sinner by listing the Ten Commandments. Everyone is Titus: through his figure De Andrè lists the ethicality of the most sacred imperatives, attacking the hypocrisy of the false moralists and sticklers, who want to nail someone to the cross for not having respected a commandment whenever possible.

The track La collina (The hill) opens De Andrè’s third concept album by, based on Edgar Lee Masters’s Spoon River Anthology, translated into Italian by Fernanda Pivano, a poetess and a friend to De André. In this sort of prologue-song: the singer-songwriter wonders where Elmer, Bert and Tom are (three men killed in a fight), where Maggie went after she took her last breath in a brothel.

The answer is unambiguous, in the refrain: “Dormono tutti sulla collina” (They’re all sleeping on the hill), where the Spoon River graveyard is. The album then tells of the more or less freakish inhabitants who lived in the village and who now lie buried: taking inspiration from the epitaphs of the original literature comes Un matto (“A madman”), aka Frank Drummer, a man considered insane and locked up in a mental hospital because he could not communicate his thoughts through language, and Un giudice (“A judge”), Selah Lively, often derided because he was short, but who took his revenge as a judge, arousing fear in those who previously mocked him.

In the mid 70s, De Andrè moved to Sardinia and in this piece he speaks the most “American” of his souls. A ballad written with Francesco De Gregori in his house in Gallura, smoking cigarettes and drinking from the moment they woke up. It is a harmonious but also an obsessive journey that tells the story of a man’s journey towards the rejection of what is considered right only because it is forced on us. Another “outcast” with whom De Andrè empathized, because like him he made choices that were neither simple nor “wrong”. But what is right and what is wrong when you question yourself and your path, diverging from the trodden path and bearing responsibility for every consequence? It is perhaps one of the existential questions that most gripped De Andrè during the 6 long months of the kidnapping in the Sardinian countryside in ’79.

Creuza de mä: De Andrè worked on the album with Mauro Pagani and released it in 1984: it is the culmination of an illustrious career and the result of an unparalleled operation of musical and linguistic archaeology. Written in Genoese and played with traditional Mediterranean and North African instruments, Creuza de mä is a record about the sea, about the endless journey of those who cross it, about the stories everyone making port has. It is difficult to choose a specific song as the album’s epitome, so the title track appears the most appropriate because it tells a story of sailors, of “emigranti della risata con i chiodi negli occhi” (emigrants of laughter with nails in their eyes).

De Andrè’s worked on his thirteenth and last album, released in 1996, with his colleague and fellow Genoese Ivano Fossati. Its main theme is solitude, in all its forms and told through each song’s protagonist: transsexuals, Roma, lovers, fishermen, even the one chosen by the artist himself as an ideal condition.

Per chi viaggia in direzione ostinata e contraria
col suo marchio speciale di speciale disperazione
e tra il vomito dei respinti muove gli ultimi passi
per consegnare alla morte una goccia di splendore di umanità di verità.
(For those who travel in a stubborn and contrary direction / with their special mark of special despair / and among the vomit of the rejected take the last few steps / to give death a drop of splendor, of humanity, of truth)

The title of the album itself means “lonely spirits”, so much so that the whole album can be considered a “eulogy for loneliness”, which allows us to be free and not to be conditioned by society. The last piece of the album is Smisurata preghiera (Enormous prayer) in which a wandering sailor reflects on the fundamentals of life: considered the epitome of the whole album and its themes, it is a sort of cry for redemption (however impossible, immeasurably necessary) by those who have chosen solitude for freedom. One can say that the piece is the summary of Fabrizio De Andrè’s entire work, his lasting message; it is an act of love for all minorities, a timeless testament, more relevant than ever.

For the picture thanks to ARCHIVIO/A3/CONTRASTO