There was a time, not so long ago when Italy was playing in the World Cup. There was even a time when the Azzurri didn’t even have to play qualifier matches; as host nation, they were automatically invited. This time was 1990, when the FIFA World Cup took place in Italy, for the first time since 1934.

The decision was made in 1984 when Italy won the ballot against the USSR by eleven votes to five. Because of this, Italy became the second country to host the tournament a second time, after Mexico (in 1970 and 1986).

The organization was entrusted to a young, up-and-coming Ferrari manager, named Luca Cordero di Montezemolo. You may have heard about him playing all kinds of roles during the past 30 years.

Putting aside sporting terms, Italy ’90 immediately conjures up three important memories for anyone who was around at the time.

The first one is the tournament’s anthem, or better yet, its Italian version. It was an iconic Italian song, ‘Un’estate italiana’ by Gianna Nannini and Edoardo Bennato. If it doesn’t mean anything to you, you may know it as Notti Magiche. On this subject, in Italy at least, ignorance is not likely to be tolerated.

The Second memory is about the stadiums: a topic that has been discussed far and wide in recent years. In late 1980s Italian stadiums had to be retrofitted, if not totally redone, in order to host the World Cup. As is traditional, the constructions were torturous.

“We’re already wasting this big opportunity represented by the construction (or redeployment) of a lot of stadiums in view of 1990 World Cup. The situation is impoverished by a series of feuds between groups of builders wanting to weigh in on the affair. There are also disagreements between local councilors and private companies. The political parties are involved too. No one is thinking about the main problem: how a 2000s stadium must be in Italy.” This was the feedback at the time.

It’s in this climate that all these builds were finalized. We’re talking mainly of course about San Siro’s third ring, San Nicola stadium in Bari and Delle Alpi stadium in Turin. Those works were the last serious modernization that has taken place in Italy.

The third and final memory, one many would consider secondary, is the mascot. For this edition, a stick figure was designed with a ball to replace the head and painted with red, white and green. This stick figure was renamed in the most Italian way possible: Ciao. A symbol that probably wasn’t very handsome, but surely everyone has seen it at least once.

The 1990 cup wasn’t particularly spectacular from a goalscoring point of view. In fact, the Italian World Cup registered the lowest goal scoring average of all World Cups to date; only 115 in 52 matches. A sort of tribute to the Italian defensive tradition.

“In Milan, the fourteenth edition of the World Cup is beginning. Here we are: Italy, after months of spasmodic waits filled with controversies, doubts, worries and hopes, will finally be able to express all its enthusiasm and passion for the event. The whole country is throwing a big party for this long-awaited Cup, as it is taking place in the country that many consider to be among the most advanced footballing nations in the world. With this magnificent display of color, an unforgettable sporting event begins.”

The opening game was unforgettable. The reigning world champions Argentina, with Maradona as captain, faced Cameroon. The African team supplied the first surprise of the tournament.

The first ninety minutes were enough to seal it, as Milla and his teammates defeated Argentina 1-0, despite two red cards. Cameroon finished first in their group, in front of Romania and, alongside Argentina, getting into the quarterfinals, where they lost 3-2 to England. 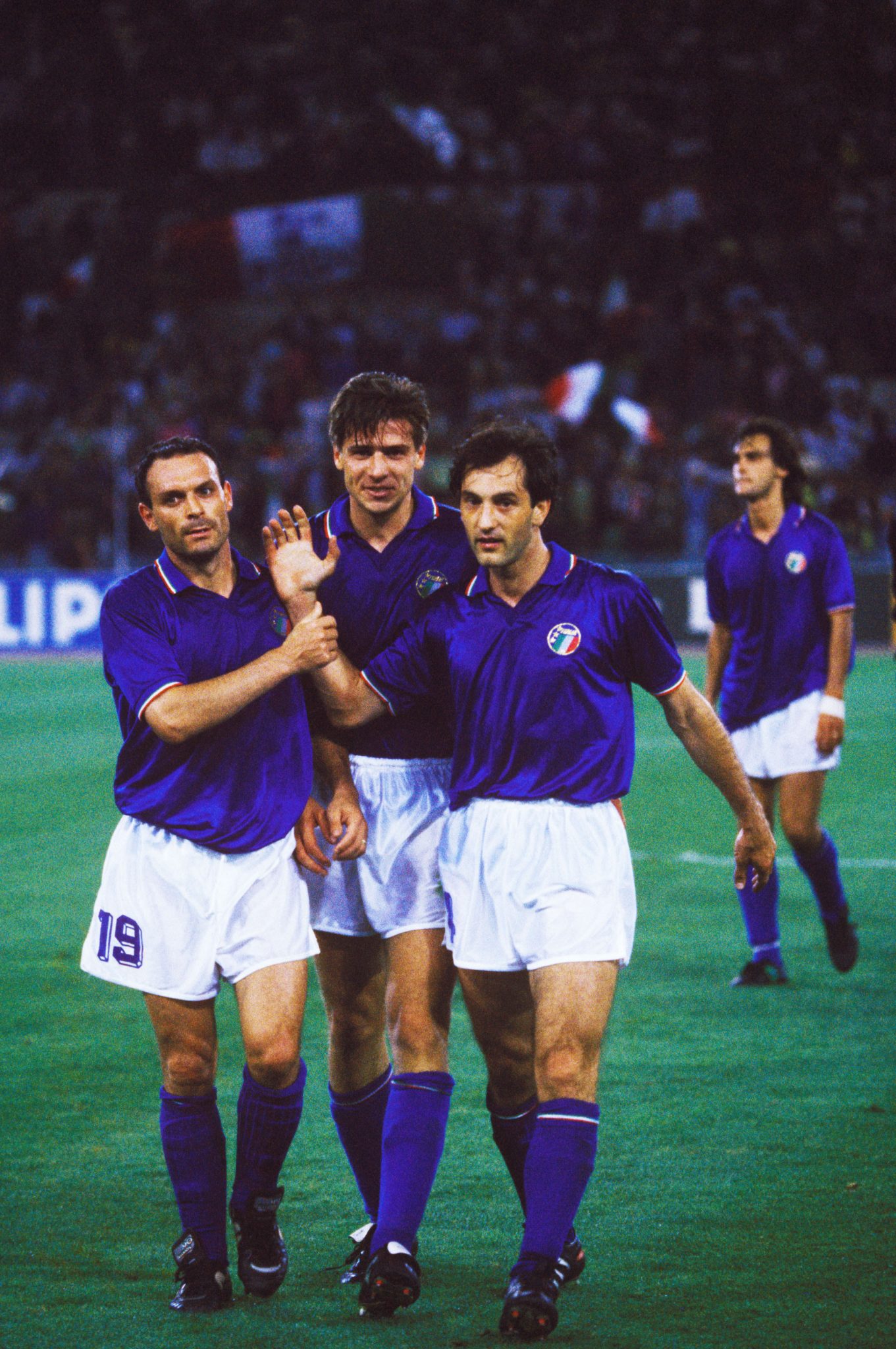 The star of the Indomitable Lions was their goalkeeper Thomas N’Kono, whose idol was a man named Buffon, and who gives his son the name Thomas in his honor. Also of note was Roger Milla himself, aged 38 at the time, but succeeded in scoring four goals nonetheless.

Perhaps there wasn’t, generally speaking, the greatest show on the pitch, but, as if in compensation, the emotional transport was unique, and not only for the hosting team.

The presence in the World Cup of some Serie A icons like Maradona, Van Basten and Matthäus lead to a unique situation, polarizing the support for the national team with the affiliation of important players for the local teams, bringing on some fierce rivalries even when Italy wasn’t on the pitch.

An emblematic example? Germany-Netherlands with Brehme, Matthäus and Klinsmann on the first side, and Rijkaard, Gullit and van Basten on the other one. Inter-Milan, in extravaganza shirts. Played, of course, in San Siro, by sheer coincidence.

“A single specific game, though, will bring the whole support question to another level ― a really historic match, one that gets remembered even today: the semifinal between Italy and Argentina.”

Italy staying in it’s own World Cup was mostly thanks to its iron defense, led by all-time greats like Baresi, Bergomi, Ferri, and Maldini, with Vierchowod and Ferrara on the bench, defending Walter Zenga, the best goalkeeper in the world.

No goal was conceded in all three matches of the group stage, nor in the last sixteen match against Uruguay nor the quarter-final against Ireland. There was no lack of big names on the offensive side either: Vialli, Donadoni, Mancini, Baggio, Serena, together with Giannini, Ancelotti, Berti.

But above all: Salvatore Schillaci, a striker bought by Juventus a year before. Totò was the absolute star of the Azzurri, living a graceful month.

He started as a substitute of Vialli or Carnevale, but it immediately became clear that his performance was too good to be ignored. It seemed that the goals just fell upon him: scoring six times in total, scoring every goal for the team but two, and winning the goalscoring and the best player titles.

“I was hoping to play some minutes, I was happy just to be called up with the national team. Not even a madman would imagine what was about to happen to me. There are some periods in a player’s life when you can do everything. As you breathe your score. For me that state of grace coincided with the World Cup,” Schillaci tells about his experience.

Argentina, reigning world champions, suffered a lot. After the first loss, they got through the group stage despite placing third, achieving just one win against the USSR. The last sixteen match against Brazil was pure agony: as the green and gold missed a lot of good chances and got punished by Caniggia, following up on an intervention by Maradona.

The quarter-final against Yugoslavia went to penalties, and the team needed the great performance of the goalkeeper Goycochea for the win.

The most explosive element of the semi-final was the venue: Italy-Argentina was played at the San Paolo stadium in Naples, practically Maradona’s backyard. He immediately threw gas on the match by asking for the support of his club fans. The call to the public is unforgettable, summed up in a very clear phrase:

“Neapolitans know who to cheer for.” The famed filmmaker Paolo Sorrentino stated this: “During Italy-Argentina, I supported Argentina, like the whole San Paolo.”

A bit overkill, but it tells you the strange mood that was set for the semi-final. The match is remembered with pain by all the Azzurri supporters.

Needless to say, Italy took the lead with Schillaci, but in the final shot, they suffered the most unique goal of the tournament, after 518 minutes of invincibility, caused by an error that will be forever remembered by Zenga. 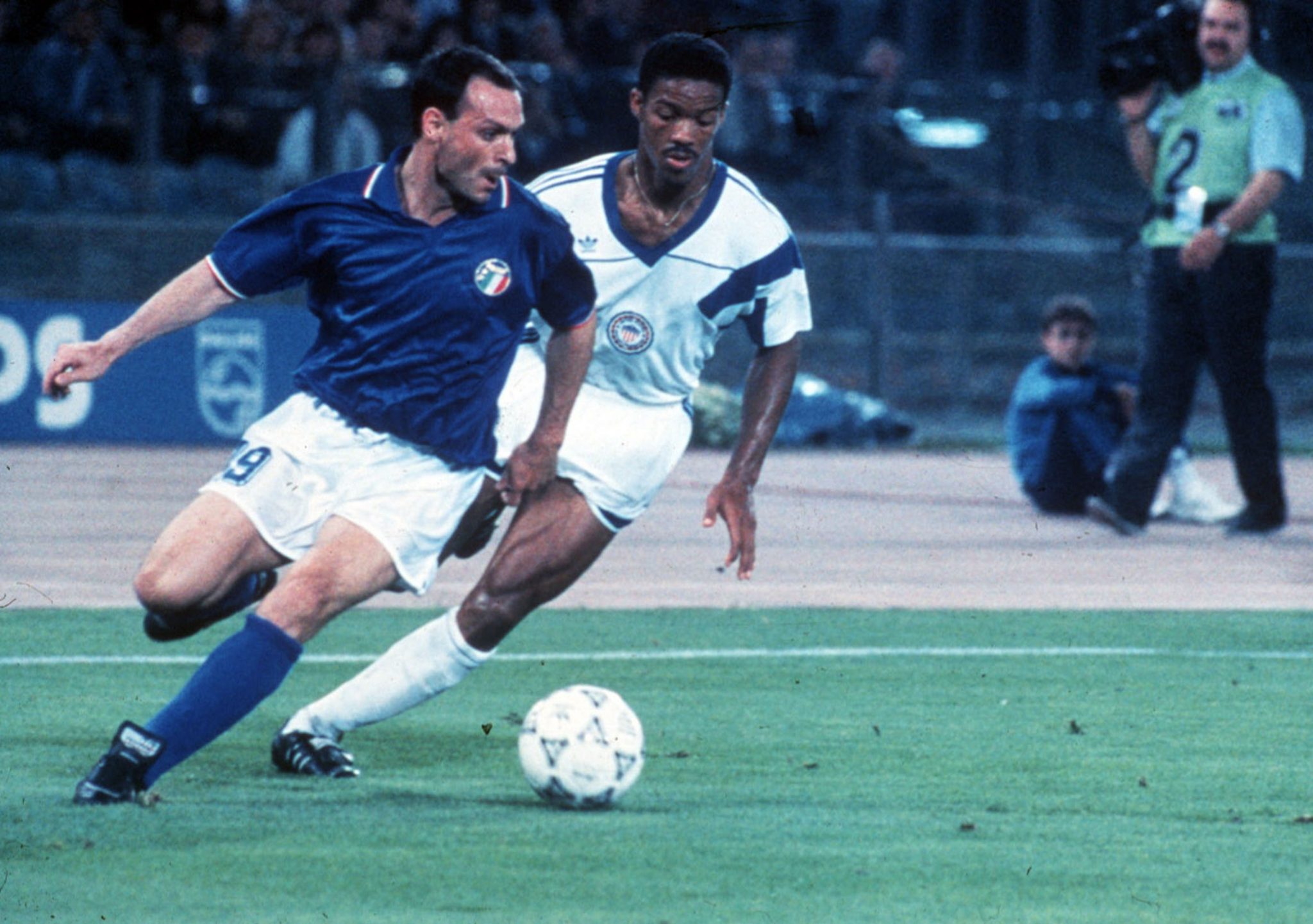 Caniggia evened the score and the balance didn’t break again until penalties, where Goycochea neutralized Donadoni and Serena’s shots. Argentina in the finals, tons of broken hearts in the stands. Schillaci remembers the match:

“It was done, we were winning, we were at home and Argentina wasn’t dangerous at all. We all believed in it. And in the finals, as host nation, we could never have lost. But instead…”

The remains of a match with an epilogue so bitter that the Azzurri carried it all the way to the finals between Germany and Argentina. The anthem of the Albiceleste was drowned out by whistles from all over the Olympic Stadium in Rome.

Maradona, always himself, made sure to clarify his thoughts by chanting the words “hijos de puta” in front of the cameras, dedicated to supporters.

There was no great football in the final. Argentina-Germany was a tough and dirty match, also bad refereed, decided only by a penalty at 84′ and with the teams 9-to-11. Giorgio Tosatti, an Italian popular journalist; comments:

“Italy ’90 ends with the ugliest final in history, a monstrosity to spread on tv with the label: ‘How not to play to soccer’(…) Germans and Italians whistle the Argentine anthem at every action of the players. Maradona is treated as if he was a criminal. The rudeness of the supporters is by far the worst thing of the match, basest partisanship of those who believe ― whistling Argentinians ― to avenge the motherland is disgusting. If this is a sport, forget it.”

Germany, called West at that time, wins its third world championship. Gary Lineker, defeated in the semi-final by Germany whilst captaining England, says an iconic phrase to underline this achievement:

“Soccer is a simple game: 22 men chasing a ball for 90 minutes and at the end, the Germans win.”

Matthäus wins the 1990 Golden Ball, but do you know who came in second? Totò Schillaci, hero for a summer.

Eicma 2019 is now over: a week for motorcycles and their brands to be the main characters. Here we want to tell you about one of the greatest Italian brands. From bicycle-manufacturer to track records Born as a small bicycle factory, Aprilia discovered the charm of engines and speed in the Sixties. Since 2004 it […]

Even at 80 years old, people can ― and must ― pursue their dreams. Giampaolo Dallara, a famous Italian engineer, decided to finally focus on his own dreams of building a car, which he had long neglected for the sake of hundreds of automotive projects he had developed for car companies. Born in Parma on […]