Italy, with its diverse and evocative landscapes, has always inspired sensitive verses by such prestigious poets as Petrarca, who in the XIV Century, concluded his poem ‘O d’ardente vertute ornata et calda’:

“Since it can’t carry there to the four corners
of the world, let that lovely country hear it
the Apennines divide, and Alps and sea surround.”

In this poem from the Canzoniere, the poet from Arezzo draws upon Dante’s dittology “Bel paese” (Italy) to describe the Italian peninsula’s panoramic landform. Nowadays, the poetic expression is also used in reference to Italian history and culture, stressing the harmonic combination between the seaside, mountains, and lakes, and the architectural beauty offered by the cities.

In addition to prose, the Country’s elegance naturally stimulates cinematography, providing ideal locations for national, as well as international, film productions of every genre and time period. During the 50s, for example, the economic boom revamped Cinecittà.

During this period, the studios on Tuscolana Street were where the Peplum genre celebrated the Roman Empire through films that showed the history of gladiators and recreated historical buildings such as the Coliseum and the Roman Forum. 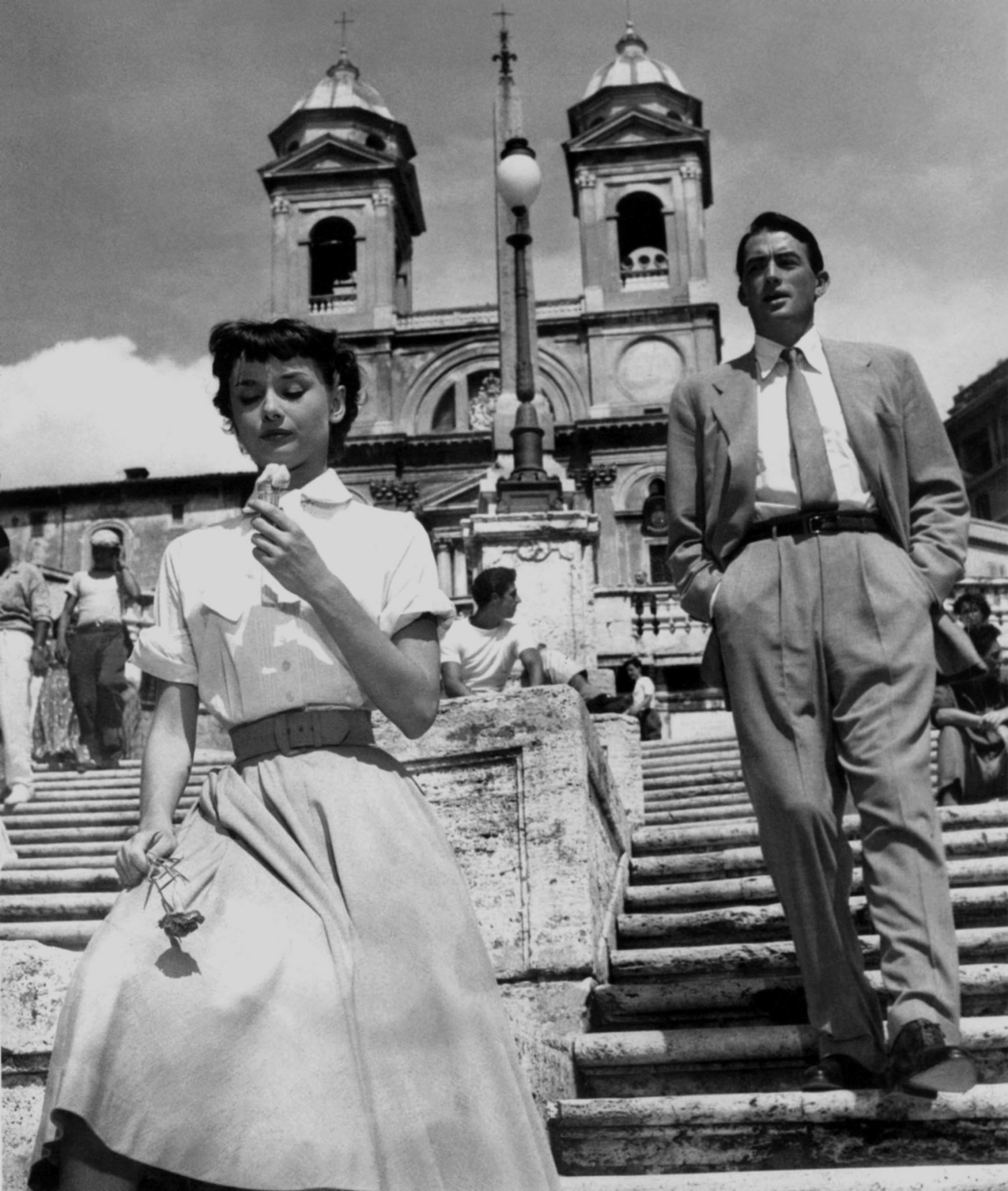 In 1953, William Wyler directed Roman Holiday, a contemporary story which portrayed a sentimental Rome where an unforgettable romance between Joe Bradley (Gregory Peck) and Princess Anna (Audrey Hepburn) took place. Rome is the protagonist, and it charmed the English actress so much that in an interview she revealed,

“Every city is unforgettable (in its own way). However, if you asked me where I prefer, I would say Rome, as the memory of this visit will not abandon me as long as I live.”

Suso Cecchi d’Amico and Ennio Flaiano’s writing earned the film an Oscar for best screenplay, with its detailed depiction of the city. In fact, the two lovers traveled around Rome’s most evocative places on a Vespa: from the Roman Forum to the Coliseum, along with the Circus Maximus, next to the Tiber up to Venice Plaza, and even to the Trevi Fountain.

The fountain is an iconic Roman monument where Fellini, in La Dolce Vita with Marcello Mastroianni (cover photo) in 1960, shot one of the most classic romance scenes in Italian cinema.

The film was widely acclaimed in America but it did not convince Italian audiences, who did not seem to like the “postcard image” of Italy offered by the foreign directors.Forty years after Wyler’s love story, the Caro Diario, starring Nanni Moretti riding a Vespa, painted a poetic and scenic ― but not touristy ― overview of Rome’s streets.

“The Italian director explored less-celebrated places, from the Hollywood-style mansion of the housing estate Casal Palocco, to the seaplane base in Ostia where, in 1975, another proponent of the Italian culture, Pier Paolo Pasolini, was killed.”

Riding in Bruno (Vittorio Gassman)’s Sport Aurelia in The Easy Life, Dino Risi drives out of Lazio along the intimate Tyrrhenian Coast, past the crowded beaches and the trattorias. Once Risi reaches Tuscany, the region’s artistic and architectural heritage is cleverly painted in Franco Zeffirelli’s classic cinema inspired by literature. However, the touch of several foreign directors slightly inflate the narrative.

In 1985, the lovers from A Room with a View by James Ivory filter some of Florence’s attractions such as the Old Bridge, the Arno, and the Cathedral of Saint Mary of the Flower. In 2001, the statues in front of Piazza della Signoria were turned into a grim scene in Ridley Scott’s ‘Hannibal’; being the plaza where the cannibal psychiatrist played by Hopkins hangs his victims.

In 2016, Ron Howard directed the film adapted from Dan Brown’s novel Inferno. He showcased the Boboli Gardens and the Uffizi Gallery, leading the protagonists to the front of Vasari’s “Battle of Marciano”, located in the Salone dei Cinquecento at Palazzo Vecchio.

Travelling north, the quaint estates along Como Lake were effectively described by Manzoni in the Betrothed’s opening and featured in scenes from ‘Star Wars Episode II – Attack of the Clones’.

George Lucas was particularly fascinated by Villa Balbianello and its cinematographic gardens, where he shot some of the scenes that showed the romance between Anakin Skywalker (Hayden Christensen) and Padmé Amidala (Natalie Portman).

George Clooney was also so impressed by the beauty of the lake view that in 2002, at the end of Ocean Twelve’s shooting, he bought “Villa Oleandra,” where he used to spend his summers.

The Alps frame Italy, majestically watching over the peninsula and offering breath-taking landscapes. Luis Trenker is the Italian personality who best encapsulated the soul of the mountains of Alto Adige:

“Trenker was a mountaineer, writer, actor, and director and he created more than twenty films, which portrayed the tops of the area he loved and personally explored.”

Trenker’s realistic movies, were followed by The Fearless Vampire Killers in 1967, by the Polish director Roman Polansky. It is set on Seiser Alm’s peaks, whose snowy tops perfectly recreated the vampire atmosphere of Transylvania.

Italian landscapes and history have always attracted the aesthetic taste of the most refined directors from all around the world, who have known how to enrich the scenery as a location for their films. The intense cinema production offers a 360-degree vision of Italy for any kind of audience, and therefore contributes to draw nature, art, and cinema lovers.

Milan, 1960s. For thirty-year-olds, this can be a mystery. For me, a puzzle comprising a number of pieces: the economic boom and immigration, 1968 and student rallies, the first miniskirts and, of course, music. I have never followed a “unitary” path in learning about this decade, because I (mistakenly) thought I already knew all I […]