«T hat’s where Slow Food was born».
This is what everybody has repeated to me whenever I mentioned Trattoria Masuelli San Marco, a historical Milanese location where I love to go and eat risotto, cotoletta and other northern Italian “comfort” food. 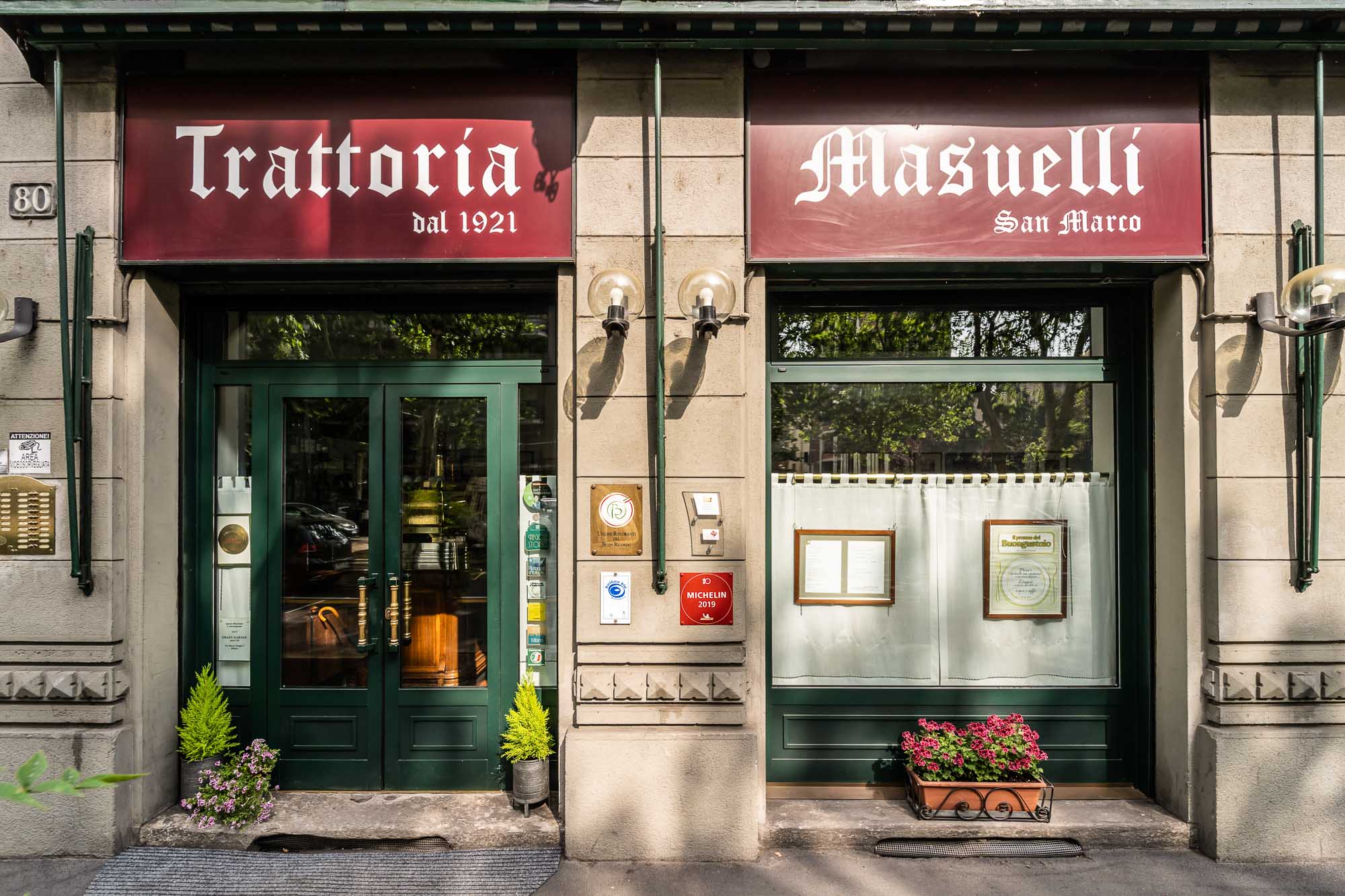 But when I was asked to interview the owner Max Masuelli, I was ill at ease. «Ok, Simone, you’ve interviewed so many of those chefs, don’t worry», I repeated to myself on my way to viale Umbria 80. Yet I could not help thinking that if Carlo Petrini’s creature “Slow Food” really was born within these walls, I would have to be careful not to state the obvious.

Did I succeeded? I don’t know. What is certain is that the Masuelli family, despite the elegance of precious glass chandeliers and memorabilia on the walls, knows how to make you feel at home as soon as you cross their threshold. A lordlike youth welcomes me, elegant and with a friendly way of times long past. I will soon find out that this is Andrea Masuelli, Max’s son and the fourth Masuelli generation, who already runs the dining room. 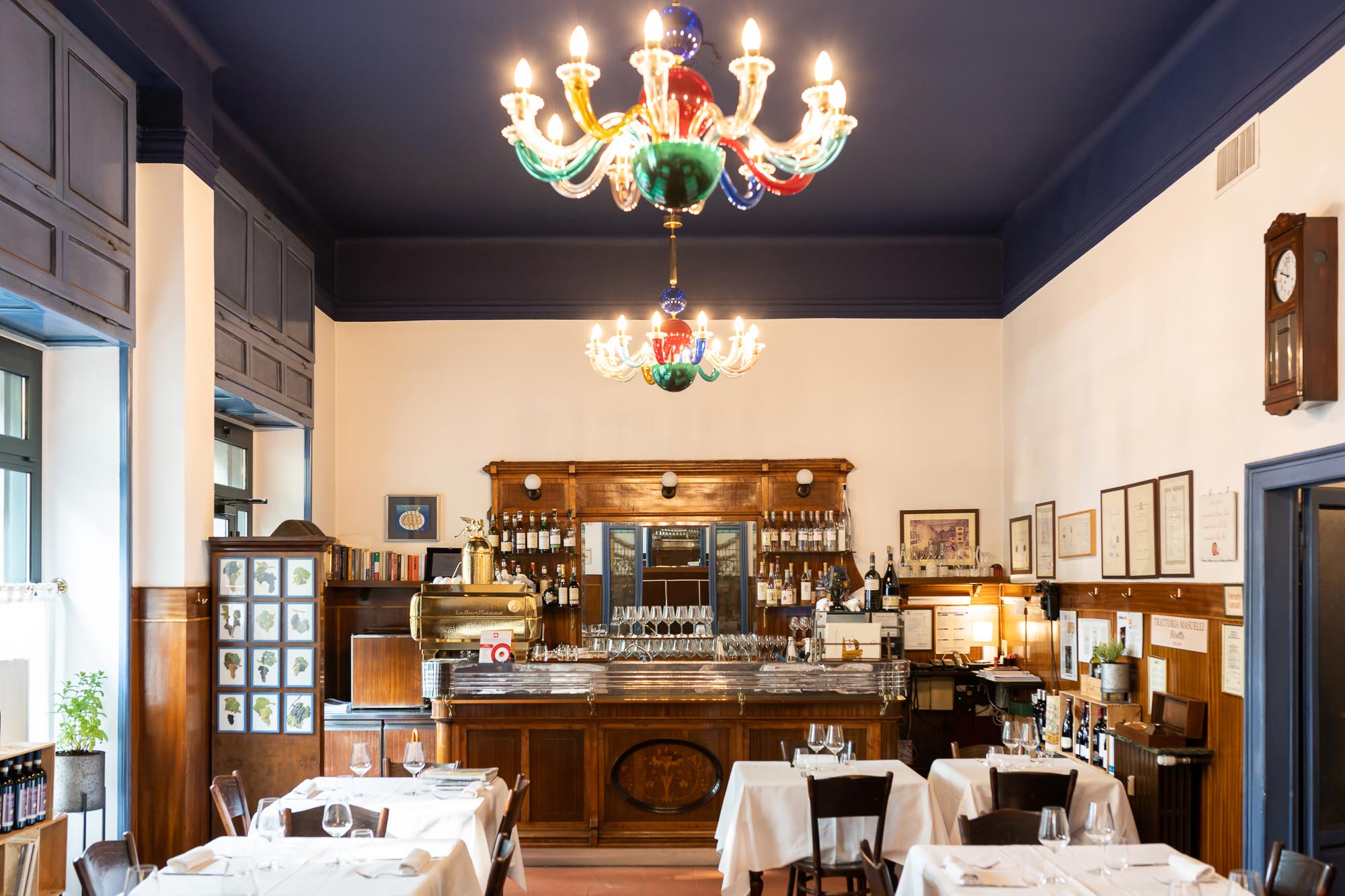 Max Masuelli arrives sporting a big smile, wearing a polo shirt and shorts; when I tell him we should take photographs he changes, and within a few minutes he returns in a chef’s uniform. Ready? No, in the meantime let’s start cooking a risotto – “It takes time, nothing here is precooked,” he explains.

Perfect, now we can start.

Hi Max, with so much history we just have to start from the beginning. How was Trattoria Masuelli born?

Everything comes from my grandparents, Francesco and Virginia. Born in Masio, a town in the province of Alessandria on the border with Asti, they moved to Milan in 1921. They began to look around town with the idea of starting a trattoria, and thought via San Vincenzo, parallel to Corso Genova, was an ideal location. They opened Masuelli Francesco’s Trattoria Masuelli. Later they moved to Viale Bligny.

When did Trattoria Masuelli San Marco arrive in its historical current location?

Around 1929-1930 they discovered the block in Viale Umbria where we are still today; it was under construction then. It was an important area for catering: the old fruit and vegetable market, the poultry market and the slaughterhouse were here. They moved, but for reasons unclear to us (probably bureaucracy) they could not move the license of the Bligny site. A few moths later they found a license for sale for a location in Via San Marco called Locanda con alloggio San Marco. They bought it with every intention of changing the name as soon as possible, but ended up becoming fond of it, so it became Trattoria Masuelli San Marco over time.

Who joined Trattoria Masuelli San Marco at the time?

People certainly came here to eat but it was also a meeting point and a place for games. No Black Jack or anything like that: here they played checkers and old card games like Strip Jack Naked or the Italian Scopa.

Then came the second and third generation…

Yes, after my grandparents my father Giuseppe (Pino to everyone), my mother Cleofe, my uncle Renzo and his wife Anna ran the restaurant. The two men ran the dining room, the two women were in the kitchen. Trattoria Masuelli San Marco, with its Piedmontese and Milanese cuisine, has increasingly become a landmark in the city. Having reached the age limit, my aunt and uncle decided to retire in 1987. I had been a cook in other Milanese restaurants since 1983, having also had the good fortune of working with Gualtiero Marchesi, and my parents asked me to join them. I accepted. My parents stayed in the restaurant until 2018. Today, with me, there is Andrea, my son and representative of the fourth generation.

What is left of the original cuisine of Trattoria Masuelli San Marco today?

A lot of things. We pay attention to the demands of the market, of course, but our approach is the original one: we offer a home cuisine in public.

The Piedmontese tradition is very present in your menu. So why is your Buon Ricordo dish, which should represent the restaurant more than any other, milanesine (small cutlets) with risotto?

We have always offered a Lombardo-Piedmontese cuisine, perhaps a little more Piedmontese actually. But when my parents started running the restaurant, Milan began to be more present in the dishes. Here we make ossobuco but also vitel tonné, bagna cauda and bollito misto. From time to time I like to offer seafood dishes; this does not mean I “distort” our offer, I think I rather make it more contemporary. Risotto, as well as small veal milanesine, perfectly represents our way of cooking: nothing is prepared in advance, whoever orders the dish knows that the cooking of his risotto starts from scratch, and that they must wait to taste an excellent product. In this sense, our Buon Ricordo dish tells us what we are, although I have to say that maybe, after so many seasons, I would like to propose a new one. 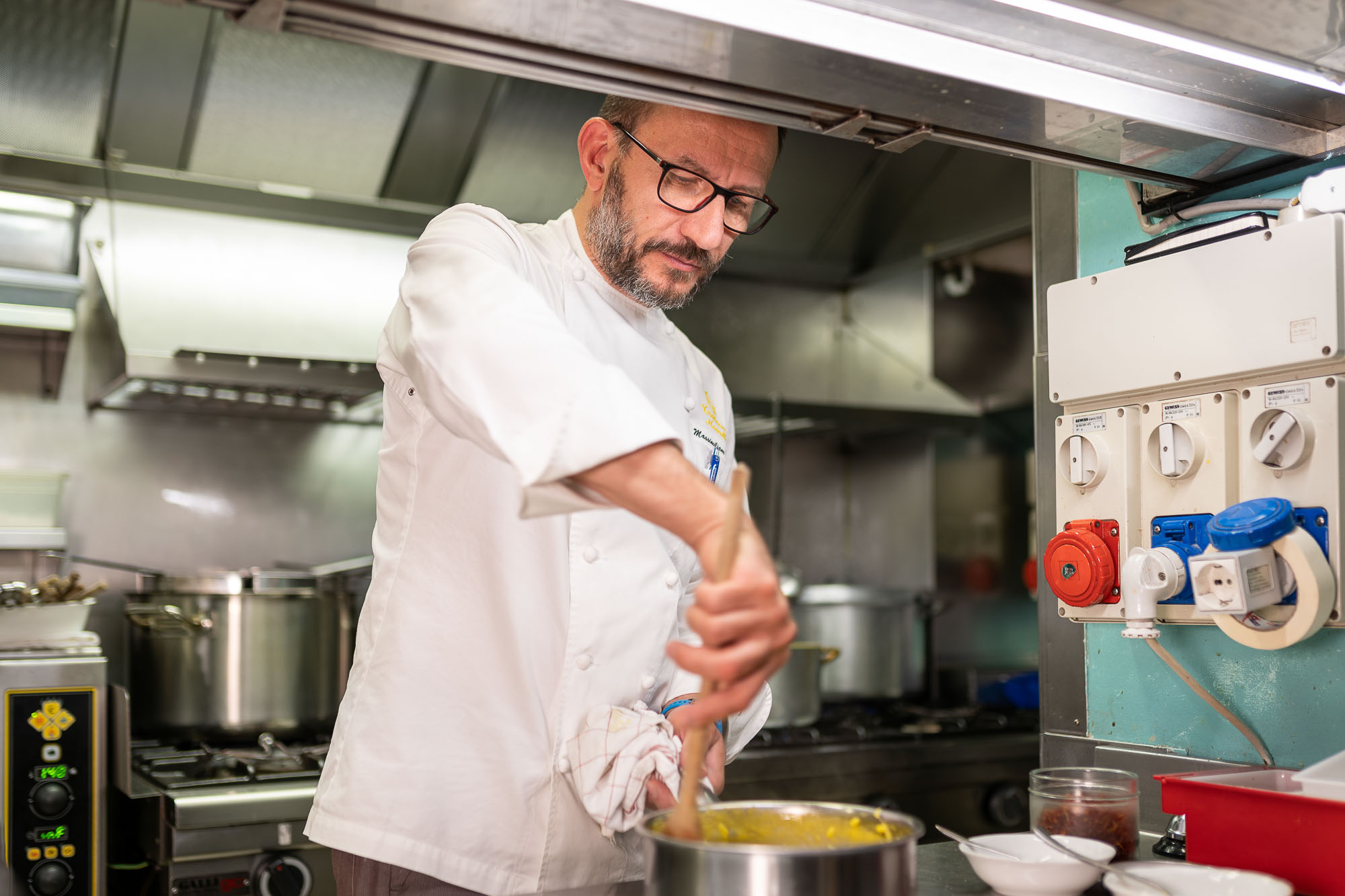 How do you prepare your Risotto alla milanese?

I know that many use butter but I personally cook the rice with a drop of extra virgin olive oil, without adding the onion. Then I smear it with white wine. At this point I leave it in the vegetable broth until it is cooked. I add national saffron, from Sardinia. For the cream I use butter and parmesan. Having an international clientele, this version is the one that most meets the request. Those who like the classic recipe, which involves the use of marrow, an ingredient that I adore, need only book it in advance.

It is said that Slow Food was born here. But no one ever adds anything else, neither a story nor an anecdote. Can you tell us about it? Was the global movement really born here?

As you can see at the entrance of the restaurant, there is a plaque that states exactly what you said. It was affixed by Carlo Petrini, founder of Slow Food, to testify and certify that the major food theorists met in the old dining room of Trattoria Masuelli. First of all Petrini, but also Antonio Piccinardi and Gianni Sassi, creator of the magazine La Gola. The topics dealt with were those that are talked about so much now, and for the time they were really revolutionary. So yes, in a way the idea of Slow Food began to take shape here. I can just tell you what I know, but if these walls could talk…