Athick neck, an oak-like body. Rugby is more than a sport: it is a lifestyle. Fair. One of the most played sports in the world.

Rugby, Warwickshire, England: the sport takes its name from here, where in 1823 William Webb Ellis picked up the ball and began to run towards the opponent’s goal to then crush it beyond the baseline during a soccer game. A gesture that gave its rough shape to a wonderful sport, the shape of an oval football and “H” posts, which even today has values ​​and fair play on the field as it did then.

In Italy, the birth of rugby almost coincides with the story of a player who became a legend: Mario “Maci” Battaglini, born exactly 100 years ago. 1919, Rovigo: Maci was short for Macistin, as his mother called him when she saw how large her son was; Maci remained his name forever, all the more so as he grew up to become a man with an imposing physique (135 kg along 185 cm).

Battaglini’s rugby was pure passion, impetus, love. To get by in those harsh times you had to work hard, and the time to play was scarce. In fact, the war came and Maci left for the Russian front, but managed to return to take up the oval football again. An exemplary personality.

«My rugby players are good especially because they try to eat as I do.»

Rovigo was his city: with the Venetian team he won three of the five championships he won in Italy (the other two arrived in Milan with the Amatori, a glorious and multi-titled team). Then the international career, receiving another nickname in France: “Le Roi des Buteurs”, the king of top scorers. He ended his career as a coach.

The philosophy of rugby has it that matches and opponents must always be honored and respected, doing their absolute best for all the eighty minutes of the game. This principle also applies to the strongest teams: lowering your pace on the pitch or no longer trying to score only because you are winning widely would mean not considering the opponent at your level.

The result is a way to demonstrate a team’s value on the field, but in rugby it is not the only way of keeping the score: you can be satisfied even at the end of a game lost by forty points.

«We will have obtained our most beautiful victory when Italian mothers push their children to play rugby if they want them to grow well, have values, discipline, know respect and how to suffer. This is a sport that trains for life.»
John Kirwan, ex Italian coach

Today, the World Cup will start in Japan and will last until November 2nd. Italrugby, guided by Conor O’Shea, was included in Pool B with New Zealand, South Africa, Namibia and Canada. The realistic aim of the Azzurri, considering the insidious and complex composition of the group, is to reach the third place to obtain the pass for the 2023 World Cup.

Now, as never before, Italians love the oval football: they are madly in love, they stay glued to the television when the Azzurri take to the field. Over the years many personalities of the entertainment world, of politics, of the institutions that practice rugby.

An example is Ernesto Guevara de la Serna, known in all the world as “Che”, who was a rugby player, despite suffering from asthma. During games he kept his inhaler in his pocket, which became essential when necessary. The nickname Fuser, which his dear friend Alberto Granado gave him, derives from “Furibondo Serna” (“Furious Serna”), since he excelled in the field.

Javier Bardem is a respectable third line, with a past also in the Spanish Under 20: the versatile actor, in his spare time, tries some throw-ins and some drops.

In the movie “Lo chiamavano Bulldozer”, Bud Spencer act as an ex American football star, but in his life, Carlo Pedersoli’s physique (193 cm, 120 kg) allowed him to be a more than decent second line. Between takes, he never stopped practicing the sport he had a played when he was younger.

Even His Holiness Pope Francis is a lover of the sport: the pontiff played with the team of the San Lorenzo de Almagro before devoting himself completely to his faith. 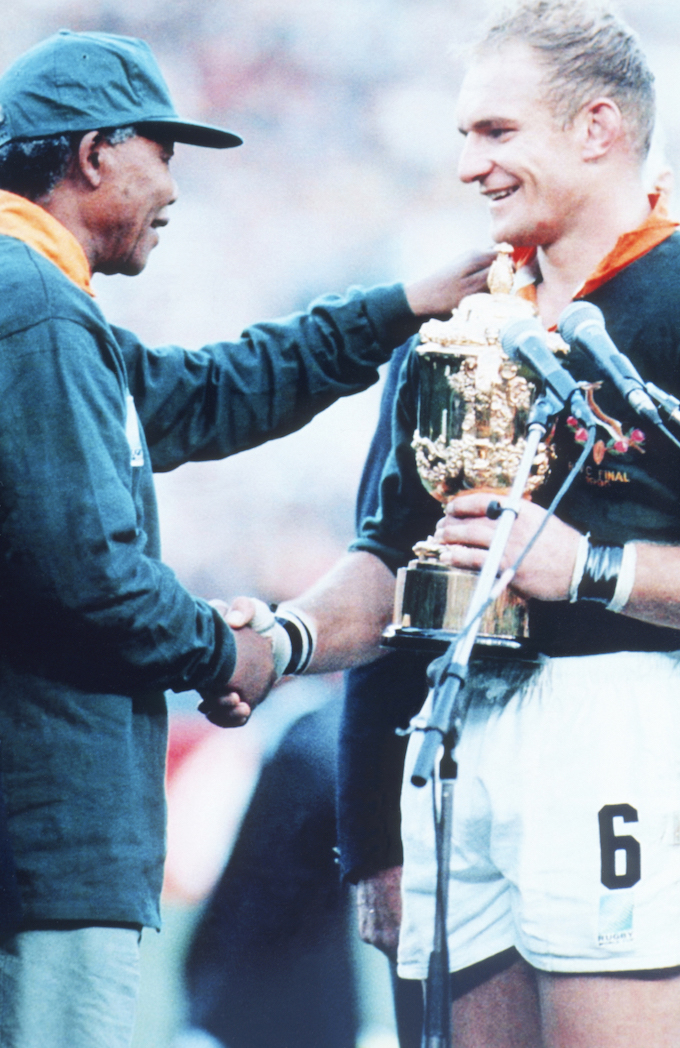 «This is the time to build a nation.»

No wonder, then, if rugby was the sport that united South Africa in every sense: in 1995, the unforgettable Nelson Mandela saw the Springbocks captain François Pienaar lift the world cup to the sky in Johannesburg.

Mandela had a brilliant intuition: to rebuild his country by spreading and conveying the values ​​of sport. Mandela had known the language of rugby during his years in prison, observing how men behaved on (and off) the field while the prison guards played. And it was precisely through rugby, played by the white minority alone, that he decided to be “forgiving”, surprising everyone with generosity and understanding. “I know what the whites have taken away from us,” he said, “but this is the time to build a nation.”

Rugby was hated by the blacks, who played soccer. But Mandela realized that the sport of whites, which was then the rich and cultured minority of South Africa, could not be abolished, but had to be destined for sports throughout the country. So he took the opportunity during the World Cup held in South Africa, for an event that was a sports celebration, but also a political, with over a billion people ready to follow him.

Their victory was not only an incredible sporting achievement. It was the triumph of a nation that emerged from the darkness of apartheid, in which the distances between whites and blacks were for the first time canceled to support the exciting journey of the team.

«Rugby is a ‘primary’ game: you have to get a ball into the heart of the enemy’s territory. But it is based on an absurd and wonderfully perverse principle: you can only pass the ball backwards. The result is a paradoxical movement, a continuous doing and undoing, with the ball flying continuously backwards, but like a fly closed in a running train: although it flies backwards, it still reaches the final station: a spectacular absurdity.»
Alessandro Baricco

We are ready, therefore, to follow the World Cup in Japan: in the hope of seeing the Azzurri win a few matches, but well aware that if this does not happen we will, however, have witnessed a great show. Because rugby is a sport that trains for life, as Kirwan said. You sweat, you fight with your teammates. We always get up, headed to a new destination.

Classic electric cars: anything is possible

When we talk about electric vehicles we usually think about the future of mobility. This isn’t accurate however; at the end of the 1800s when the automobile was still a young discovery, car producers used to try different solutions to power automobiles: vapor, fuel, and electric. The first car built by Ferdinand Porsche in 1898 […]