Many stories, even the biggest ones, seem simple at first. They flow without interruptions and seem propelled forward almost by fate. But if you look at stories properly, really reading between the lines, you can find other stories, (maybe) smaller, and filled with unresolved questions and unrequited feelings.

The love story between artist Ernest Hemingway and the lovely Agnes von Kurowsky is one of these stories. It’s a story of two parallel lines running alongside one another and suddenly intersecting; two ships passing in the night that eventually meets. This point of intersection, of two paths crossing, is in Milan.

It’s 1918 and the city is going through hard times; Milan was in the midst of World War I and trying to react to the all the accompanying upheaval. 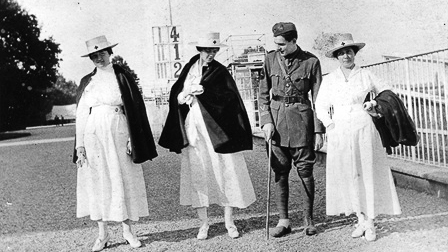 Some people are thinking about happier times; some people with their last dying breaths, are trying to hold onto a shred of hope; some people animated with optimism, are dreaming of a bright future around the corner.

And there is someone, driven by a voluntary call no one understands, driving the Red Cross ambulance, and handing out chocolate and cigarettes to cheer up the army.

“Ernest is Ernest. A person that makes his own decisions without being asked. Stubborn. And he’s only 19.”

Away from the frontline, Agnes is also facing the hard times of the war in her own way. She cannot believe she is in Italy at the moment. She pictured her life somewhere else, far away, living boring, yet reassuring, days are hidden between the walls of a Washington library.

Or, she imagined herself running through the streets of a little Italian village, peeking out from places she couldn’t even dream of. Surely, she did not picture the corridors of a hospital in Milan, where she was now volunteering for the Red Cross.

Still, she had decided to leave her country to help other people, the war has brought out a civic awareness from within her. Agnes is Agnes. A girl that wants to live a fulfilled life. She’s 26.

Ernest is passing out chocolates to the army when he is caught up in cross-fire. Immediately, there is blood everywhere, gushing at first, but then flowing like a river. A mortar fire hits him, like hundreds of tiny little pins poking his skin and then penetrating deep down into his flesh, keeping him on the ground in pain and unable to breathe.

Ernest is taken to the Red Cross Hospital in Milan and is under the care of the best nurses. He is the second American hit at the frontline: another American died two days earlier in these corridors, the same place where now his life hangs in the balance. Ernest is aware that he could possibly lose his leg, but he knows for certain that he does not want to die in this hospital, like this.

He knows he has to fight with all his strength and stubbornness to stay alive. 12 operations keep him in his hospital bed, with a huge cast on his leg, but Ernest is alive as ever. A beautiful nurse, whose routine visit he looks forward to every day, keeps him in good spirits, even in his bed-ridden state.

“‘Kid,’ Agnes teasingly calls Ernest. The little soldier is courting her, and she enjoys making him squirm a little bit at first. Even if they feel a very intimate connection from the very beginning, Agnes is a very popular girl and not an easy catch.”

But Ernest is a fighter that never gives up ― artists know how to make a mess, after all. Love notes, the promise of a glass of Italian red wine and dinner: the fantasy of living a life outside the hospital walls. These dreams for Ernest are his illumination, the same glow that emanates from Agnes’ eyes. Agnes loves these moments that distract from the daily routine, and she keeps a diary to remember them forever.

After a couple of months of recovery, Ernest is finally released from the hospital. After Agnes’ pushing, he decides to go back to America, but not without first asking for her hand and her promise of being together once again. It is just an arrivederci ― a “see you soon” ― and not a “goodbye,” he thinks.

It’s March in Hemingway’s mansion, in Oak Park. A letter has just arrived at the mailbox. It’s from Agnes. She is saying goodbye, ending their relationship. This is one of those moments when it seems that your fate is indeed written by someone else. It’s just not up to you and, for some inexplicable reason, you decide to simply let go.

We jump forward into 1951 when Agnes finds a job at a bookshop in Key West. She has never been to Florida before, and she is thrilled to start a new life, always staying foolish and hungry for new things coming her way. 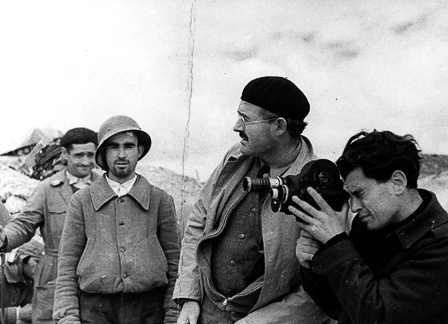 Ernest, on the other hand, is now a famous writer and he usually goes back to his house in Key West to look for inspiration for his novels. Destiny is trying to bring them together in the same place once again, to make their paths intersect once more. But Key West is big. It isn’t easy to cross paths simply by chance.

“Even if they are in the same place once again, it is just a trick of mirrors; they will never meet again.”

Key West’s port is heading east. When they look at the sea, Agnes and Ernest are looking in that direction. Their thoughts are still of Milan, of the corridors in the Hospital on Via Armorari. Those beds, the testimonies of two lovers, so close but so distant at the same time.

The incredible art of stuntman

The most anticipated event in Hollywood (and not only) looms: the Oscars have come to the fore, and today there’s nothing else to talk about. So we’ll tell you about other performers, often “invisible”, but without whom it would be impossible to create breathtaking scenes: stuntmen. Stuntmen still embody the spirit of attraction cinema today, […]