You wake up, get out of bed, eat breakfast, shower (if you’re an early bird), get ready, pack your bag ― if you plan your clothes the night before we admire you so much ― and you get dressed and put your shoes on.

In a fast-paced society, one based on ongoing tech innovation and change, we wanted to stop for a second and find out where some of the things we use every day come from. To understand these object’s origins, and why, at some point, someone felt the need to create them.

Let’s move our eyes away from our smartphones ― forgetting about all the notifications we will receive in the meanwhile ― and look towards our feet. Let’s talk about the history of shoes.

The very first pair of shoes originated in Armenia

Discovered in good condition by archaeologists in an Armenian cave in 2010, the oldest known complex shoe is judged to be about 5,500 years old. Made of bovine leather, the shoe is made of two pieces and sewed together and fastened with laces on both the front and back. The size roughly equates to a modern-day 37.5 women’s shoe.

Why did these ancient people decide they needed a pair of shoes? It’s probably because they needed to protect their feet from sharp stones and bushes that surrounded the Armenian cave. According to an interview in National Geographic, archaeologist Gregory Areshian from the University of California hypothesizes that shoes may have been created to protect feet from extreme temperatures.

“You walk for long distances,
and the temperature vacillates from 45 degrees in summer to under zero in winter.”

To be fair, sandals were in use much before closed-toe shoes. Some researchers believe scandals existed some 7,000 years ago; pairs were discovered inside Arnold Research Cave 2 km north of Portland, Missouri. Some academics speculate scandals to have existed as long as 40,000 years ago.

In 1991, a mummy was found in the Ötztal Alps, at the border between Italy and Austria. It was a male body in his 40s and was consequently named Ötzi, the mummy of Similaun. Nicknamed ‘The Iceman’, he was discovered to be wearing rudimentary shoes made from grass and rope to insulate him from the cold.

This mummy is also the first known man to be tattooed; in fact, Ötzi had tattoos all over his body. There were a total of sixty-one tattoos, made of simple dot and line designs.

Evolving shoes leading up to the birth of Christ

In 1200 B.C., Egyptian sandals were fashionable ― for those who could afford them. While the working-class walked barefoot, rich people liked to distinguish themselves by wearing sandals. Soles were made from various materials: wood, leather, papyrus (the most common), palm leaves covered up with canvas, and rarely, leather. Most of the shoes resembled modern day flip flops. Later on, shoes with closed-toes came into style.

The shoe reached to the ankle in 1000 A.D. in Greece. The leather they used came from the region surrounding the Black Sea, from Cyrenaica to Sicily. The first Greek shoes had a leather sole and laced all the way up to the ankle. In the time of Homer, these shoes were for soldiers. Shoes were important symbols of wealth in society: they indicated whether you were a slave or a Greek citizen.

A few years later, in 200 A.D., the Indian ‘Paduka’ shoe came into vogue. This shoe was especially popular for weddings, as they had a more formal look, with a high sole. On the upper side of the shoe, there was a sort of knob not to lose the laces. They were made from wood, ivory, and silver.

With the arrival of Romans between 100 and 0 A.D., the leather shoes went through a strong modernization. Shoes continued to distinguish classes in society. For example, shoes without heels were for the lay people, black shoes were for Roman senators, and red shoes were reserved for the highest classes. The army and gladiators wore ankle-high shoes. Spartans had the finest shoes of all, furnished with brass accents.

From Viking shoes to pirate boots in 600 years

When the Norsemen (German Vikings from Scandinavia) arrived in Europe in the early 800s, the sandal evolved into a closed leather shoe. This shoe protected their feet from the cold they encountered on their journies through mountains and rivers.

In 1200, different trends began to emerge in Asia; shoes became more colorful and intricate. Noblemen horse owners wore very flashy leather winter boots to stand out from the crowd. These were called ‘gutul.’ You can view these shoes today in the Mongolian National Museum.

During the same time period in the Netherlands, colored clogs made of poplar, willow, maple, or elm were popular. They were worn for manual labor. We imagine this shoe wasn’t the comfiest in the world, but they definitely served their purpose in the field.

French people wore clogs as well, but they were a less refined style. They were not colored and were worn strictly by the lowest classes while farming.

As centuries passed, shoes got taller and taller, with the uppers reaching past the ankle. Knights’ shoes saw a resurgence and were back in fashion. In Europe, whether leather or fabric, monk-strap boots became very popular. Today, we call them ‘pirate boots’.

Oxfords emerge and were fashionable for the all of the 1800s

In the second half of the 1600s, a new shoe model emerged: the Oxford. The first ‘Oxfords’ got their name from the very prestigious Oxford University. The United States discovered Oxfords nearly two hundred years later.

In 1700, high heel shoes became fashionable. They were the chosen attire of aristocratic people; Louis XIV of France wore them. Only the rich could afford heeled shoes, and they were a well-sought after the status symbol. At the time, men and women wore heels; they were for both genders.

In the United States, fashion trends varied. American Indian style shoes became cool in menswear. For ladies, ‘décolleté’ shoes inspired by moccasins were all the rage in Philadelphia.

Meanwhile, Oxford shoes were very trendy in all of Europe. They appeared under ‘Balmorals’ name in Scotland (the queen of the Scottish castle being its namesake) and in Ireland.

Lots of heels and ankle-high shoes until the 1970s

At the turn of the 20th century, shoe styles continued to evolve. The Mongolian-style riding boots evolved into an everyday shoe for cultures across the world. Inspired by the ‘Western’ style, American Cowboys wore boots, which were used to ride horses as well as walking in the downtown streets.

In China, they used very painful techniques to stop women’s feet growth from childhood. These Asian traditions made their way to European fashion quickly.

By the early 1900s, people living in the European Alps were wearing climbing shoes. Inspired by traditional snowshoes, they used a strong rubber sole to prevent slipping on the ice and designed a rounded tip for the grip. They looked way less sporty than the boots you see today.

After World War II, worldwide fashion rapidly changed. After the tough times of war, people wanted to feel freer and use their creativity. There was a fine line between women and menswear; celebrities, such as David Bowie, popularized slim-fitting clothes and very flashy high-heeled shoes. There was lots of freedom in the air. In ‘Let’s Dance’, he sings:

“Put on your red shoes
And dance the blues.”

Among classic shoes, Oxfords are still the most sought-after

Derbies, single and double monk straps, loafers, and moccasins are only some of the classic shoes rocking in the Italian style nowadays. Some are strongly inspired by the past while other new styles continue to be introduced, revolutionizing the market. Shoes are a living piece of history.

Since Velasca’s establishment in 2013, Oxfords continue to be our most sought-after style of shoes. They might be so popular because they are a fail-safe look for any occasion. 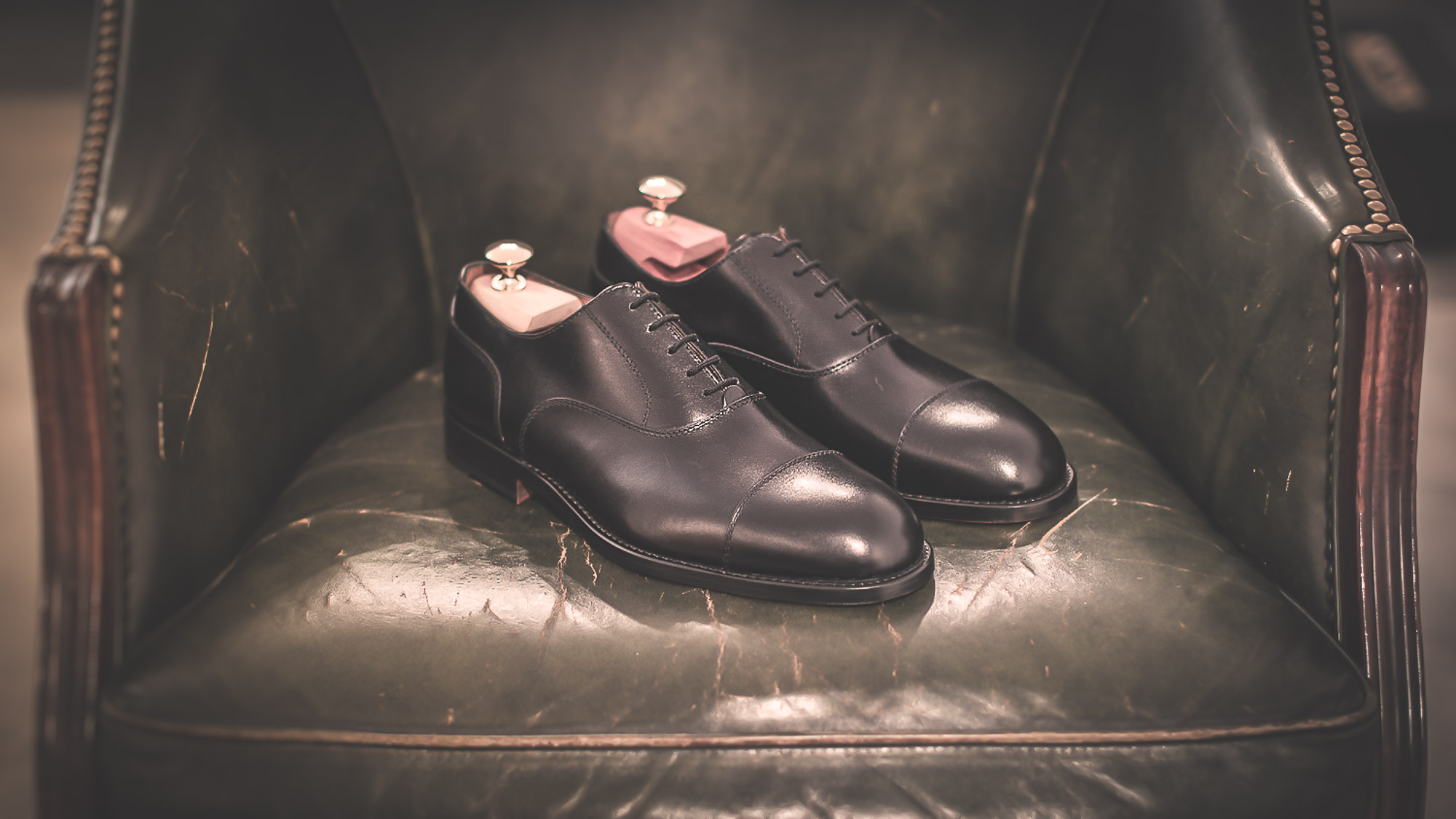