Alberto Tomba, an Italian Olympic skier, is still as relevant to his fans as he was 20 years ago before he retired. Fans, professional skiers, hobby skiers, people without any relation with sports or skiing ― everyone has heard about Tomba. He is Italy’s best skier, with charisma and media renown as well.

“In the beginning of his story, Tomba had nothing to do with skiing.”

Tomba was born in 1966 in San Lazzaro di Sevena, a hilly town in the province of Bologna. Alberto began learning to ski on the Apennine Mountains under the guidance of Roberto Siorpaes, who ended up training him for many years, even at Cortina D’Ampezzo. Once he was of professional age, he joined the Carabinieri, the Italian police force.

Tomba began his professional career at the age of seventeen. In 1983, he competed at the European Cup as a member of the C2 Italian national team. In 1984, he was promoted to the C1 team. With this team, he attended the Junior World Cup, finishing fourth in slalom skiing; a win that bumped him up to Team B.

These were the first steps of a career that immediately exploded: in December of the same year, Tomba participated in The Christmas Parallel, a parallel slalom demonstrative competition held in Milan on the San Siro Hill.

Much to everyone’s surprise, Tomba won the whole competition, even beating athletes from Team A. The next day the front page of the newspaper La Gazzetta dello Sport, proclaimed:

“An Italian athlete from Team B beats The Parallels champions.”

From the beginning, he skied in an innovative style, bringing a bit of “new school” to the sport. His style was less elegant and slender ― more aggressive on the lines, powerful and energetic. During this period, Gustav Thoeni, an Italian ski legend, noticed Tomba’s talent:

“I saw him at Tonale. He was on Team C and was already a shoo-in for Team A. He wiped out two times, but he was very fast. I asked Pietragiovanna: ’Who is he?’ And he answered: ’Ignore him, he’s just a spoiled kid from Bologna’. Luckily I didn’t listen to that advice.”

In 1985, after his advancement to Team A, and three wins in the European Cup, Tomba made his debut at the World Cup, finishing sixth in slalom skiing and beginning what eventually became a thirteen-year long career. 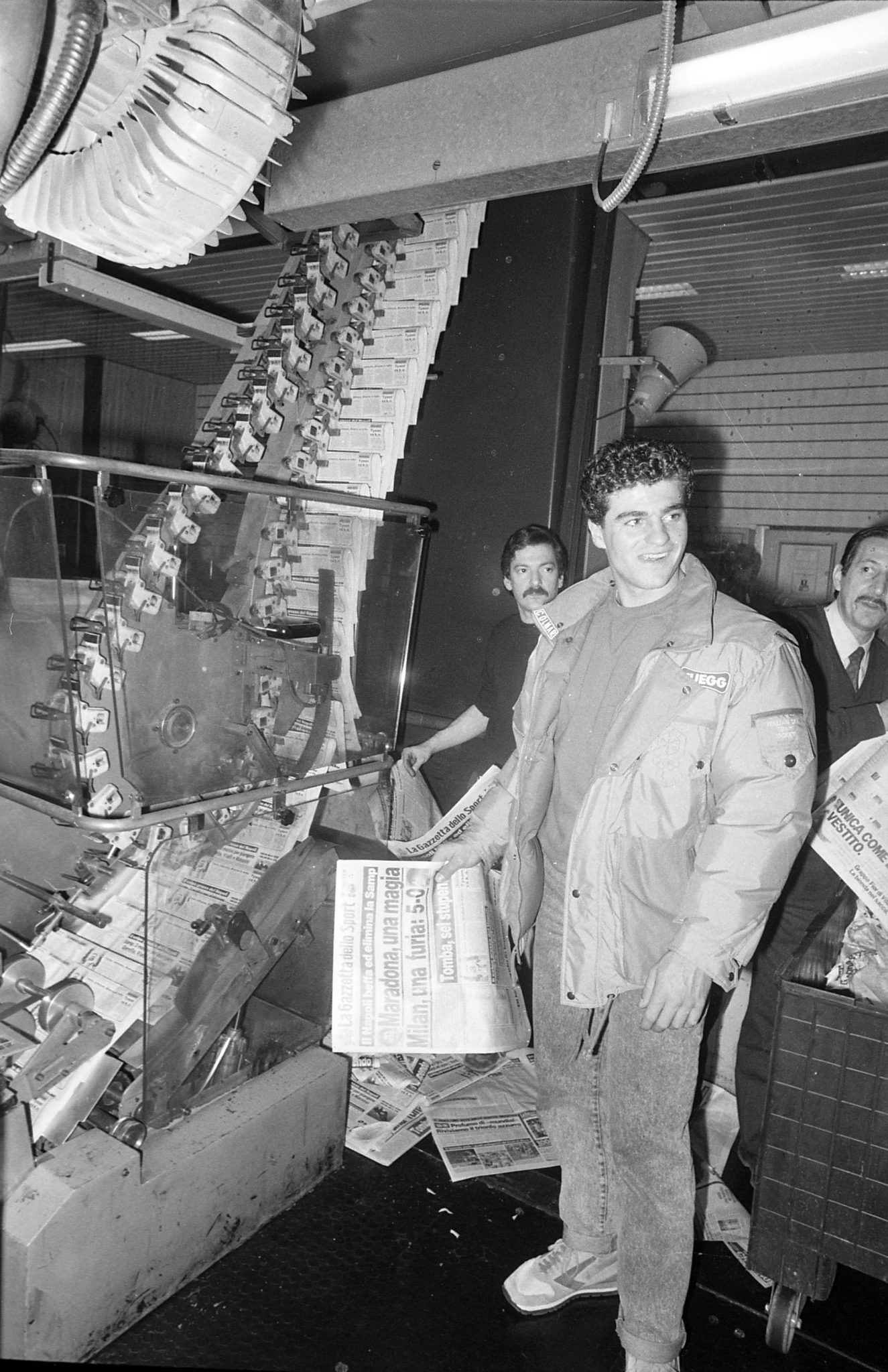 The following year, he had his first podium moment, finishing second, and in 1987, he received his first medal, a bronze in the giant slalom at the World Ski Championship. On November 27th, he won his first victory in slalom skiing at Sestriere.

In this competition, he first hinted at his strong personality: on the podium, Tomba announced his next (future) victory in the giant slalom. Two days later at Sestriere, he promptly won, beating Ingemar Stenmark, who was at the time considered the best skier of all time and was Tomba’s idol.

“Tomba gets to the finish line with his fist in the air, celebrating his win.”

The season was truly magnificent: the champion finished second in the World Cup, and also won two cups in slalom specialties. These victories were mere breadcrumbs, however, in comparison to the rest of his career.

“His consecration in fact arrived with the 1988 Olympic Games. On February 25th, in Calgary, he wore jersey number one in the giant slalom competition, which proved to be prophetic.”

Tomba’s performance was eagerly anticipated, but the champion exceeded expectations: he dominated the first heat, with the second finisher 1.14 seconds behind him. He succeeded again in the second heat, winning his first gold.

Two days later was the slalom skiing competition. Tomba’s performance was inverse of the day before: he suffered in the first heat, closing in at third place, and then regained in the second, finishing with the gold medal due to just 6 milliseconds.

Italian fans even canceled their attendance at the famed Sanremo Music Festival in order to follow the Olympic Games. The music festival took place the same day as the second day of the skiing competition, creating an uncomfortable overlap for a public that already had seen proof of Tomba’s abilities and was dreaming of another gold.

During the first heat, the festival’s organizers put a journalist in live transmission with Calgary, but the audience asked for a suspension of the event in order to have live updates on the skier. During the second heat, the announcers gave in, and surrendered the line to Canada.

“My summer began in Hawaii right after the Calgary Olympics, in February. The Americans had finally started to give me some credit ― I was ‘La Bomba’ (The Man’).”

In the following seasons, Tomba had to work hard to maintain his high level of competition, especially as he endured several injuries. In 1992, at the Invernal Olympic Games, where he was the bannerman for the Italian national team, he could not stand to fail.

And he delivered, winning his third gold in the giant slalom and rebounding from sixth place to win the silver medal in slalom skiing.

The final season for La Bomba was 1994-1995. Tomba, after a build-up twelve years long, finally won his first World Cup with a triumphant streak of eleven victories ― meaning he won every event except for one in Japan; seven in a row in slalom skiing, together with two specialties cups.

This was a triumph unseen in Italy for twenty years ― the last winner was Thoeni, Tomba’s mentor. On March 18th, 1995, there were in Bormio forty thousand people ready to witness Tomba’s glory.

“It’s hard to win a World Cup, as I don’t do downhill skiing ― which gets you lots of high scores ― because my mother has always been against it.”

As Tomba himself would say in 1987: mission accomplished. Sierra Nevada’s World Championships would have been part of this season too, but due to lack of snow, they were pushed back to 1996.

Even with the postponed competition, Tomba kept on winning ― he won two gold medals in yet another comeback.

Tomba kept on skiing up until 1998 when he retired at age 32. Even back in 1986, he seemed to be clear-headed about his career:

During his last season he got three other podiums in the World Cup, bringing his total victories to 88. These results were achieved against high-level opponents all throughout his career.

He is the only skier who had at least one victory in each World Cup for 12 consecutive years. He was voted as “Athlete of the Century” out of all the Olympic winners at the 100th anniversary of the Italian National Olympic Committee (CONI) in 2014.

Luigi “Gigi” Meroni was born in Como on February 24th, 1943. He was his mother Rosa’s second son, brother of Celestino and Maria. Cruel fate took away Gigi’s father Emilio in 1945. After a childhood spent chasing balls at San Bartolemeo’s Catholic School, in 1960 he was hired by AC Como, a soccer team in […]