The legend of Dan Peterson

Dan Peterson managed to overcome limits imposed by his sport and his role thanks to skills, charisma, and victories. He has become an icon, even beyond his career. His importance as part of his world, namely basketball, lies in the fact that he’s done more to change Italian basketball than anyone before or since.

“He was born in 1936 in Evanston, Illinois, where he took up a coaching career pretty quickly; it was his calling.”

Whilst studying, he played basketball, but his coach, Jack Burmaster, noticed that Peterson’s coaching skills were better than his playing ones. There were a few indications that this was the career for him: namely his history at the YMCA, coaching Ridgway Club, where he won three titles in three years. His career as an assistant manager began in 1962.

He made his mark in the American University system in the state of Michigan, which years later became famous thanks to Magic Johnson, USNA, and Delaware. He became head coach at Delaware when he was 30 years old (1966). During the next five seasons, he won 69 matches and lost 49. 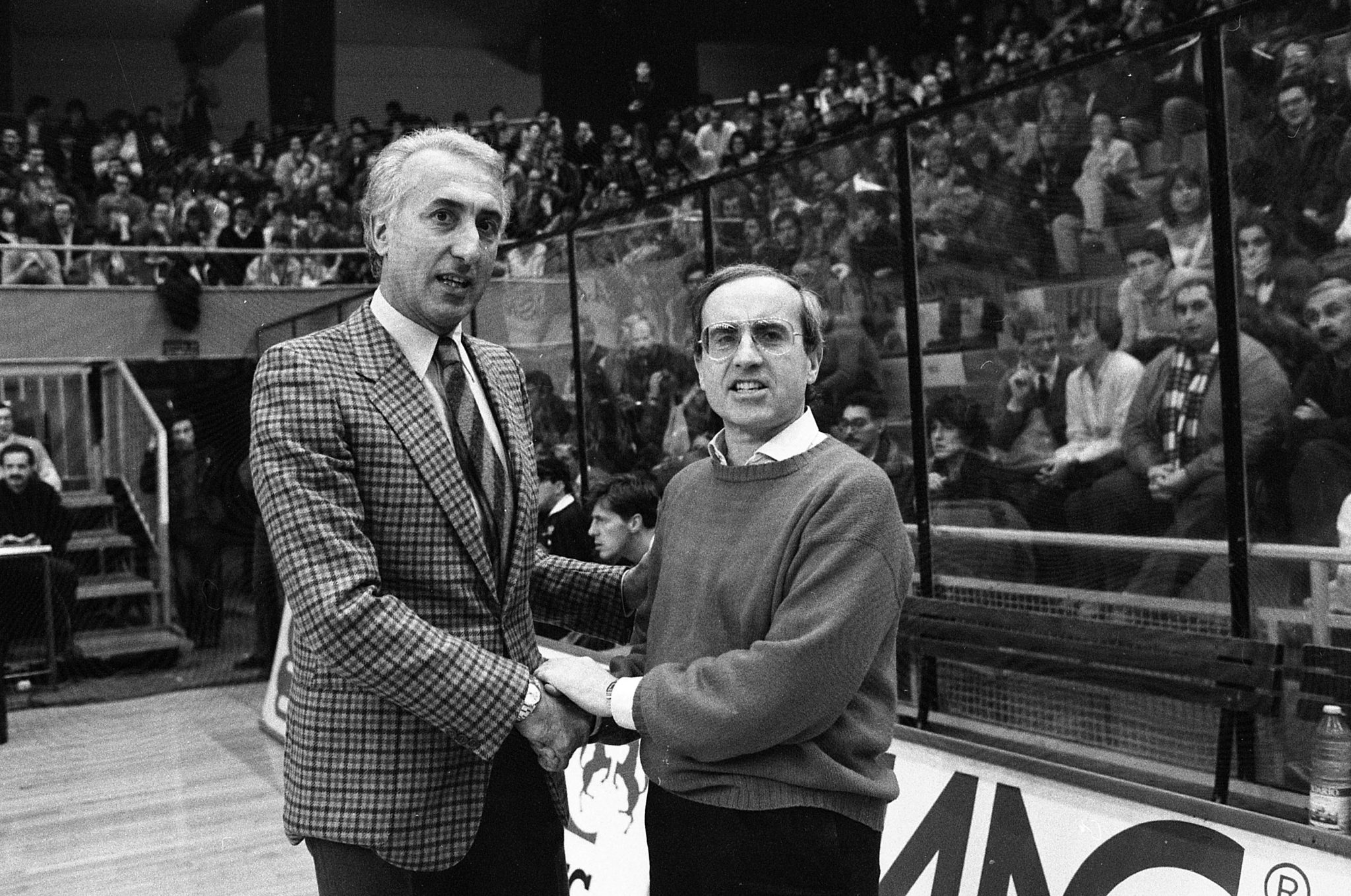 The career of the most loved coach in Italy, at least for supporters of Olimpia Milano, was destined for big changes. In 1971 he left the United States to become the head coach of the Chilean national team.

The South American national team wanted so badly a young, experienced American coach in order to grow its basketball movement.

“Everything he knew about Fiba basketball was that they played Olympic Games every four years and that the movement was less-evolved compared to the United States.”

The project assigned to him was wide-ranging. He wasn’t only supposed to shape a squad, he had to publicize the national team at every level. The coach was a sort of ambassador who had to observe players, to evaluate them, to recruit them. He also had to talk with other coaches and to establish a reputation in every city.

They were stronger and more aware of their qualities. The initial seeds of his coaching career had started to grow.

“The job I did in Chile was the main reason for my Italian success. First of all, I brought the same kind of training in Bologna and Milan. That experience changed my sensibility: I learned a lot about people, culture and basketball outside of the US.”

His work in Chile ended in 1973, when he got an offer from Italy, by Virtus Bologna. In this case, the coach’s decision was motivated by his desire for something new:

“A lawyer called, telling me that a club in Bologna was looking for a coach. I came here, and I was interested in new experiences like learning European basketball, especially Italian basketball, but also discovering Italy, and your way of life.”

In his own words, he didn’t know anything about Italian basketball, but he learned quickly. He brought his own wealth of experiences, attention to fundamentals and defense, leading to an intense and innovative way of coaching. It was a breath of fresh air. And the results are clear. Under his leadership, the Black V won the National Cup in 1974 and the National Title in 1976. Adalberto Borlotti remembers:

“When he arrived in Bologna the skepticism started to spread. The reporters who watched the training confided in me some frightful details: he doesn’t know zone defense, he confuses schemes, the players are shocked.” Luckily these Impressions were contradicted by facts.

In 1978, Olimpia Milano, a historical team in Italian basketball, chose him to relaunch them after a difficult few years. Nobody knew at the time, but the arrival of coach Dan Peterson started one of the best cycles in the history of the club and in Italian basket. Already acclimatized, the American refined his work creating a cast iron team.

He managed to be competitive at the highest level, but in order to achieve victory, the team needed the addition of a star player. So, in 1981, complementing a roster that was already strong, having been built around a playmaker called Mike D’Antoni, he added Dino Meneghin; a fantastic move.

He was a former rival, given his long-standing commitment in Varese. It was thought that he was close to the end of a great career. But he was forever a dominant center with several titles in his palmares, capable of bringing a winning mindset. With this play-pivot axis, Milano flies and titles come in thick and fast. 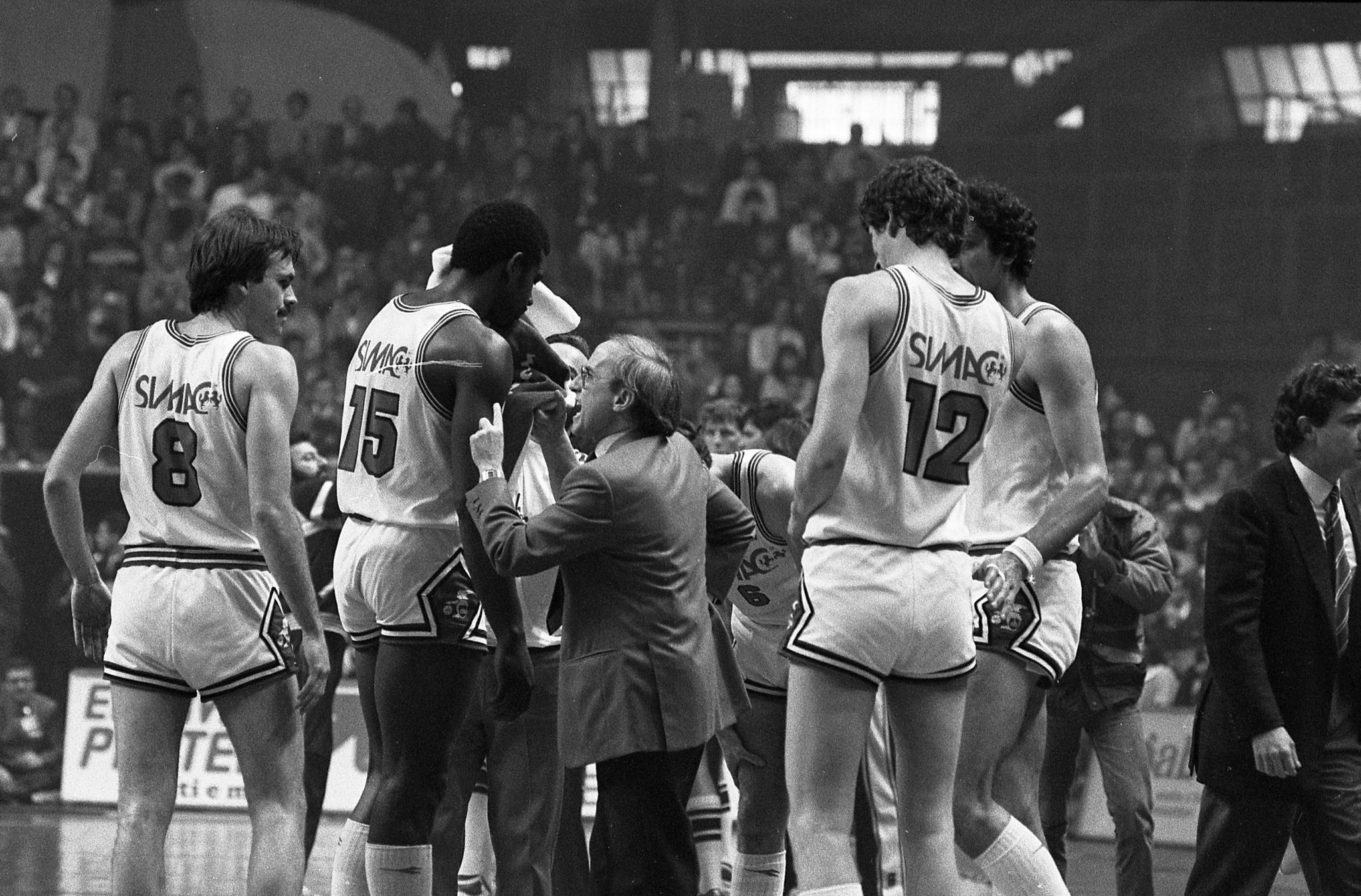 A distinctive feature of his work in Milan is the zone 1-3-1. An innovative formation based on strong aggression and pressing. To understand his mental acuity, it should be noted that Peterson, by his own admission, didn’t know anything about zone defense before he came in Italy.

From 1982 to 1987 Olimpia always got into the championship finals, winning four times, alongside the Korac Cup in 1985 and the Coppa Italia in 1986 and 1987. But it was in his last season in Milan that he realized his masterpiece: he added the Champions League in 1987 to the Championship and the Cup, completing a historic hat-trick.

This triumph was possible thanks to the addition of another important element, Bob McAdoo. After 13 years in NBA with 2 championship titles, 18,787 points scored and an MVP award in 1975, the American signed for Milan, a move completely down to coach Peterson.

“McAdoo wasn’t just a random idea, there was a lot of work behind it. It took me four years to convince him. When he came, I wasn’t worried about introducing a person like this because I knew him before. If he hadn’t been the best player in Europe at the time, we might not have succeeded.”.

The strong foundation left by the coach lead to other titles, but, especially, left a lot of treasured memories of victories. Achieved thanks to a little big man from Illinois.

The legend of Giacomo Agostini

Giacomo Agostini is an Enciclopedia Treccani (the most well-known Italian-language encyclopedia) entry. Giacomo Agostini is a living legend. The acceptance of biker as a legitimate occupation, and the growth of professional motorcycling is largely due to Giacomo Agostini, “Mino,” or also nicknamed “Ago”. Ago was born in Brescia in June 1942. But when he was […]