The name “Michele Alboreto” may seem of little importance nowadays, especially when you compare him to other drivers from the same generation. To jog your memory a bit, the movie ‘Vacanze di Natale’ (an iconic 1983 Italian comedy movie) gives a snapshot of just how highly regarded he was during his prime. In one scene Guido Nicheli, after his high-speed drive from the Alps to Milan, tells Stefania Sandrelli:

“Ivana, look at the speedometer… Alboreto is nothing!”

Michele Alboreto was born in Milan in 1956; an unusual place to grow up for a driver of any kind of vehicle. Since he was a kid, he had a passion for sports races, and after his first experience in 1976, he began to compete in the Formula Monza tournament, with a car he made on his own with the help of a few friends.

Despite his low-tech vehicle, his skills were noticed and in 1979 he began to race in the Formula 3 championship. This served as his first stepping stone.

At Formula 3, he competed in the Italian championship, where he took second place in 1979, in the English championship, and in the European one, where he finally was victorious in 1980. 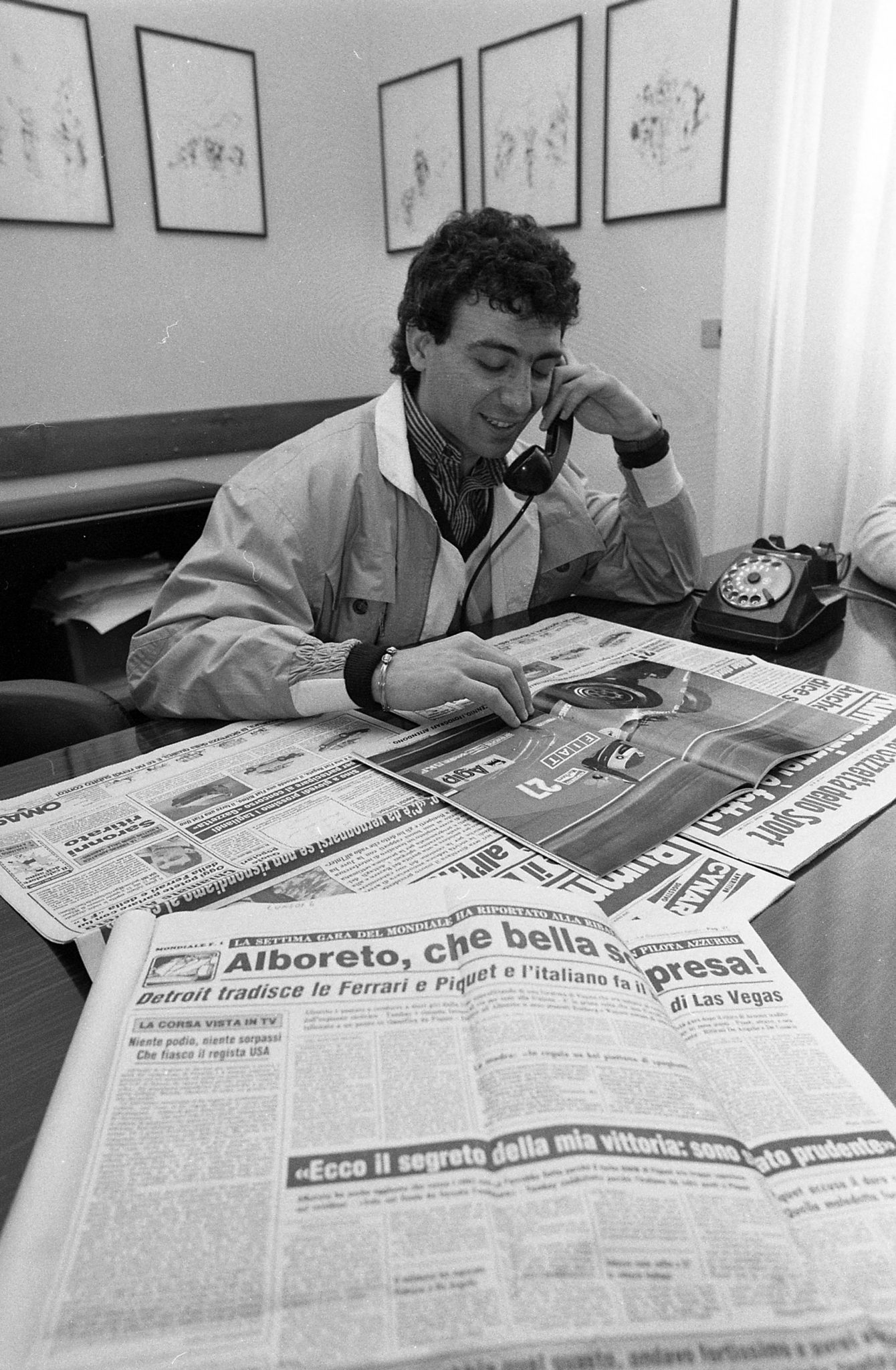 His talent made him the “next big thing” and his results brought him to the most prestigious competition: the Formula 1 World Championship. He debuted in 1981 when Ken Tyrell chose him for the team.

Advancing to a new category finally allowed Alboreto to race at the higher levels of competition, and the Milan-born proved himself able to compete with the best drivers around, even with a lower-tier car. From ’81 to ’83, while driving his Tyrell, he managed to win two victories, together with the Varzi Award for the most promising Italian driver. This attracted the attention of Enzo Ferrari, who showed an early appreciation for Alboreto.

Years later, his brother Ermanno remembered the affection of the genius founder of Ferrari towards Michele was so strong that he considered him as a son. In 1984 Ferrari signed him, putting Alboreto in the highest tier possible for an Italian driver. On the official website of the Ferrari team, Enzo Ferrari is quoted talking about Alboreto:

“He is a young driver that drives well, with few mistakes. He’s fast, and has great style: he reminds me of Wolfgang von Trips, also because he is polite and serious. I’ve said that he’s among the best six drivers in Formula 1, and with a competitive car he would easily become a world champion.”

For five years ― until 1988 ― Alboreto raced for Maranello’s team, in a relationship that had various highs and lows. Its highest point came without a doubt during the 1985 season: Alboreto won two races and managed to get on the podium for eight out of the ten races he competed in.

In the end, he finished second in the driver’s championship just behind Alain Prost, beating names like Rosberg, Senna, Mansell, Piquet, and Lauda. Alboreto was ultimately forced to retire because of mechanical problems with his car ― specifically its turbines ― during six races, including the last four of the championship.

Because of that, Enzo Ferrari went as far as to say that Alboreto is the only pilot that lost a title because of Ferrari. Gian Carlo Minardi, years later, commented about the unlucky season:

“Michele didn’t get the luck he needed. He arrived at Ferrari during a very bad moment, and a year later in 1985 he lost the world championship without any mistake of his own.”

Even after finishing his time at Formula 1, Alboreto wasn’t done with motors. He continued to race in the covered-wheels championships, returning to an old love: endurance car races, where he had already competed from 1980 to 1983 before he left to pursue Formula 1. There, he again won races, including one very prestigious victory: he was the 1997 champion at Les 24 Heures du Mans.

His endless love for engines and racing, unfortunately, proved fatal to him. On April 25th, 2001 at Lausitzring, during the overall testing for the Audi for Les 24 Heures du Mans, he spun out. Still on the track, always on track until the last minute. Another famed Italian driver, Riccardo Pratese ― Alboreto’s friend ― said a few words after his fatal accident:

“I told him a thousand times: quit and enjoy your life. He could live peacefully with his family, but he loved competing too much. I can talk like this because I lost my passion for racing a long time ago. But he didn’t, he was crazy for the helmet and the track, and he never had the strength to quit.”

In Rozzano (the Milan area), where Alboreto had spent his adolescence, there is a monument and a square named after him.

The Champion who inspired the singer Francesco De Gregori

On 2 June the 102nd Giro d’Italia ended: the race has always fascinated me for the crazy tenacity and the incredible determination of its athletes. Reading through the news, I discovered that just 100 years ago, in 1919, the first great cycling champion became a legend. I’m talking about Costante Girardengo, born in 1893, the […]