The man who made a popstar of the Mona Lisa

Aman is walking through the corridors of the Louvre. The museum is closed today, the galleries are deserted. With quick steps, the man reaches the most famous masterpiece by Leonardo da Vinci: The Mona Lisa. He removes the painting from the wall, tucks it under his arm and heads for the exit.

In less than twenty minutes, the painting has vanished somewhere in one of Paris’s myriad streets. Disappeared.

It sounds like the beginning of a film. But it’s a true story. It was just after 7 a.m. on Monday 21 August 1911. And that man was called Vincenzo Peruggia: not a professional criminal, simply an Italian workman born near Varese, who came to France to seek fortune and was eventually hired by the Louvre for maintenance work.

To this day, it is not entirely clear what prompted him to steal the masterpiece, but his reckless attempt had enormous consequences.

That gesture changed the story of the Mona Lisa forever, contributing to making it the icon we all know today.

It seems fitting we should recall those consequences in the year that marks the 500th anniversary of Da Vinci’s death, maybe trying to find answers about his real motive.

It went like this: that morning none of the few workers who worked in the museum had seen Peruggia take the picture off the wall. But no one had worried about that blank stretch of wall. Everyone thought that someone at the top had asked for the Mona Lisa to be removed. But it only took the case 24 hours to explode.

«Disturb me only if they steal the Mona Lisa!»

On 22 August 1911 news of the disappearance began to spread to every editorial board in Paris. Rotary press produced extraordinary editions. Yet many thought it was a hoax at first.

Even the director of the Louvre found it hard to believe. He had been on holiday only for a few days, and thinking it was a joke, he did not even answer his assistant’s telegram. Shortly before leaving, he had said to his employees: “Disturb me only if they steal the Mona Lisa!” But the initial disbelief soon faded: in a few hours it became clear to everyone that Leonardo’s painting had indeed been stolen.

Ordinary people, workmen and farmers thus discovered the existence of that masterpiece.

Held responsible for the mismanagement of the museum, the government was ferociously blamed. The press raged, insisting that a work of art which was “world heritage” had been lost. And everywhere in the world, Mona Lisa’s enigmatic smile appears on the front pages of newspapers.

It was then that Leonardo’s painting began its “career” and became a global icon: ordinary people, workmen, farmers, and all those who had never heard of the Mona Lisa suddenly knew about its existence. 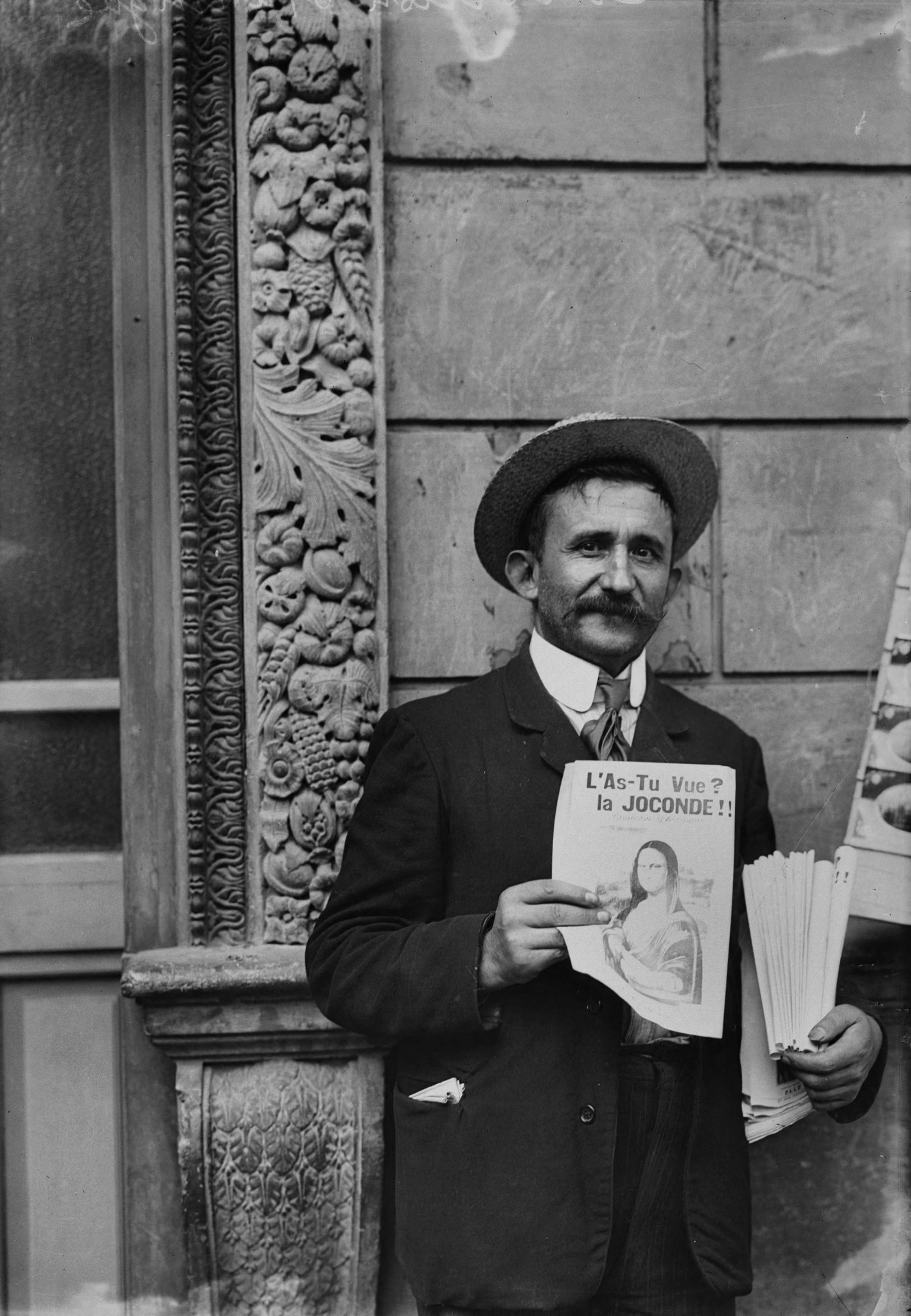 Newspapers all over Europe filled pages with details of the painting’s history for several days. French glossy magazines gave subscribers precious reproductions. Bouquinistes pulled off great deals by selling copies of the painting along the banks of the Seine.

When the Louvre reopened a week later, a hitherto unseen crowd gathered before the empty space on the wall where the painting had been. The Mona Lisa has already become a pop star.

A crescendo of twists ensued in the following months.

Diplomatic incidents seemed at hand: some thought of a plot devised by Germany; then came an alleged Jewish conspiracy; an American industrialist was also accused.

Even Guillaume Apollinaire (the most renowned French poet) and his famous friend Pablo Picasso got into trouble. A murky case of stolen goods in which they were involved kept them connected to theft in inspectors’ minds. The charges were all dropped, but their mediatic halo increased the popularity of the vanished painting evermore. 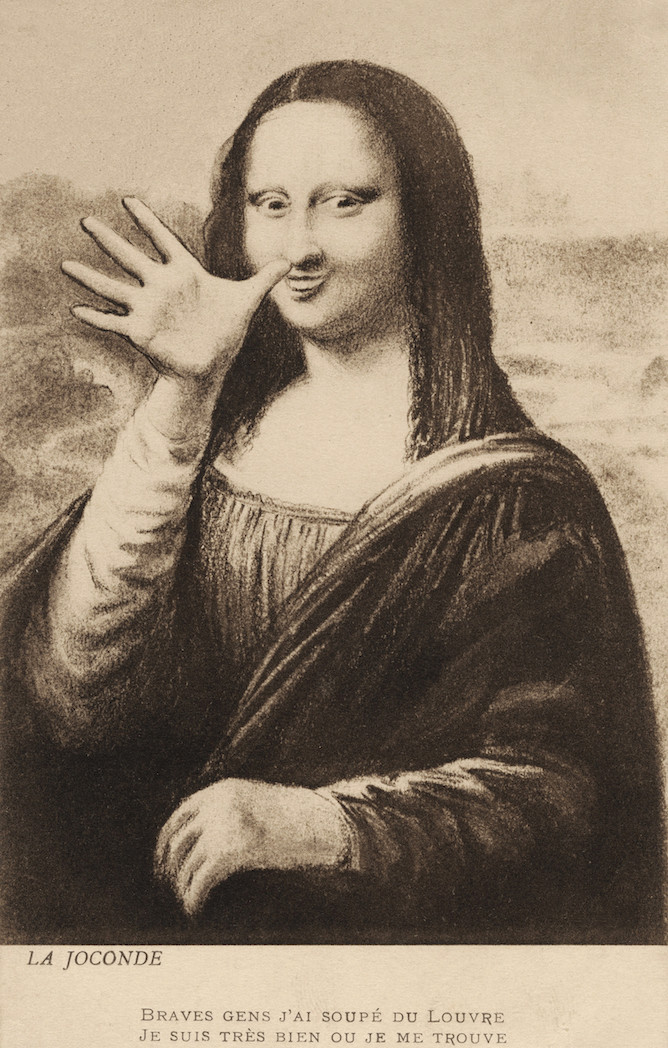 Meanwhile, suspects were multiplying to no end. More than two years after that 21 August 1911, French commissioners had to admit that all hope of finding the masterpiece was reasonably lost. But at that very moment the final coup-de-théâtre arrived.

«I have the Leonardo da Vinci’s painting. Since its author is Italian, I believe Italy should get it back.»

Thus begins the strange letter that a Florentine art dealer, Alfredo Geri, received on 29 November 1913. It was signed by an enigmatic “Léonard” from Paris. Geri believed thought was a madman, but his friend Giovanni Poggi, director of the Uffizi, suggested he should immediately set up a meeting to see the painting.

From that moment, the solution to the case was very close. Geri agreed to meet the mysterious “owner” of the Mona Lisa in Florence, with Poggi at his side. The mysterious Léonard said that, given a reward, he was willing to hand it over to the Italian State: “To return it after the French had stolen it”. There was no doubt for Poggi: Léonard had the authentic painting, it was Da Vinci’s Mona Lisa.

With the complicity of Geri and Poggi, the carabinieri went straight to Léonard, who was actually the Italian Vincenzo Peruggia, and arrested him immediately; the Mona Lisa was once again in safe hands. End of the story? Not at all, because in this whole affair a very important detail remains to be understood: why did Peruggia steal the painting?

Could Peruggia really think it would be possible to sell the Mona Lisa?

According to his detractors, the Italian worker had acted only for money, biding his time while international media stopped talking about the artwork in order to sell it to an art dealer once it had blown over; when he failed to do so, he staged the “patriotic restitution” – not knowing, however, that the painting had legitimately been purchased in the Sixteenth century by Francis I of France.

But did Peruggia really think it possible to sell a painting so “cumbersome” that it could not even be negotiated on the black market?

We will never know the answer. But I like to think of a different version. I often imagined the worker who walked in front of Mona Lisa’s gaze every day, and that perhaps he had been enraptured to the point of acting so rashly.

Every time I run into the story of Vincenzo Peruggia, I always think he did not ultimately ravish the Mona Lisa, but rather she ravished him.

During the trial, Peruggia did not deny his responsibilities. The courtroom revealed a fragile, disoriented and profoundly lonely man, who had lived with the greatest masterpiece of the Italian Renaissance in his small room for two years; sometimes staring at it for hours, enchanted by the mystery lurking in that smile.

A thief with a “poor mind, incapable of any kind of logical processing”.

It became clear clear that not only was this man not a shrewd criminal, but perhaps he was not even master of his own mind. Peruggia roused pity more than thirst for justice. Even in France, immediately after the trial, there rose committees of citizens asking Italy to grant him a pardon. Even the judges, on their part, were very lenient. The punishment for the thief with the “poor and mind, incapable of any kind of logical processing” was more than mild: only one year and 15 days in prison. 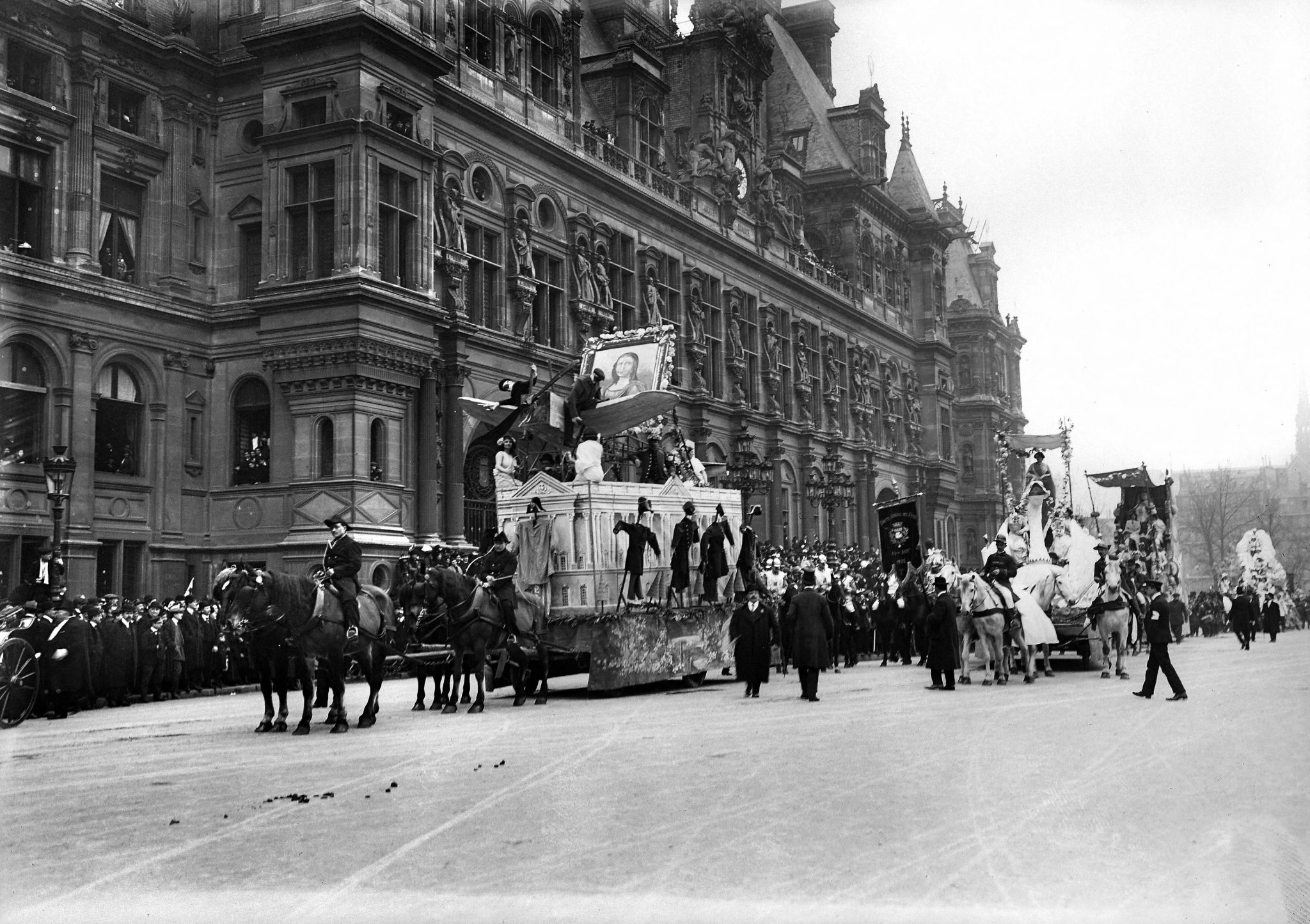 The reputation of the Mona Lisa, from that moment on, will know no boundaries.

Today it is estimated that over 80% of those who visit the Louvre are driven by curiosity about the Mona Lisa. But an exhibition of the painting after its finding as early as 14 December 1913, at the Uffizi in Florence, attracted a huge crowd; its return to France a few days later was obviously hailed equally triumphantly.

There is no doubt this will also be the case on 24 October 2019, when the Louvre will launch the great exhibition dedicated to Da Vinci in the year that mark the 500th anniversary of his death.

Once again, the crowd’s eyes will all be especially for her, for the symbolic work of the museum in Rue de Rivoli. Droves of visitors will come from all over the world to admire it.

And perhaps no one will remember Vincenzo Peruggia, the solitary thief and madman who transformed it into the most famous work of art of all time.

Cover photo and photo in the text by adoc-photos/adoc-photos and Albert Harlingue/Roger-Violl​et/contrasto.

The Elegance of Being Vittorio D.

In 1923 a young high school graduate was hired by the Bank of Italy. That day, the movie industry almost lost one of its brightest stars. The young accountant Vittorio was really talented: he had an amazing voice and he loved to sing. So, when a friend told him that Tatiana Pavlova’s company was looking […]