To set the scene: it was the late 1950s in the Italian countryside, near Bologna. Just a few years before, these areas were in the epicenter of World War II: for many months the Allies fought against the Germans in between the Appennini hills and the flat countryside of Emilia Romagna, surrounded by death, misery, and devastation.

More than in other regions, the post-war era was an essential time for its inhabitants to get back to the carefreeness that marked the period prior to the war. Bologna’s buildings were destroyed by bombings, while the suburbs were less marked by the war but with a feeling of emancipation:

“In Molinella ― a little village just outside Bologna ― the 20-year-old Raffaele, son of landowners, looked to the future with faith and lived in the present among friends and charming ladies, and nights spent at the most famous seasides.”

Such a well-off man needed a great car: Alfa Romeos were surely the best that a young man could dream of: the cars were sporty, won in Formula 1 and other major international races, and had a 40-year tradition.

The Ferrari company was still too young at the time, even if it was growing quickly ― it produced a limited number of sports/racing cars made famous by Enzo Ferrari and the Corse Alfa Romeo team. 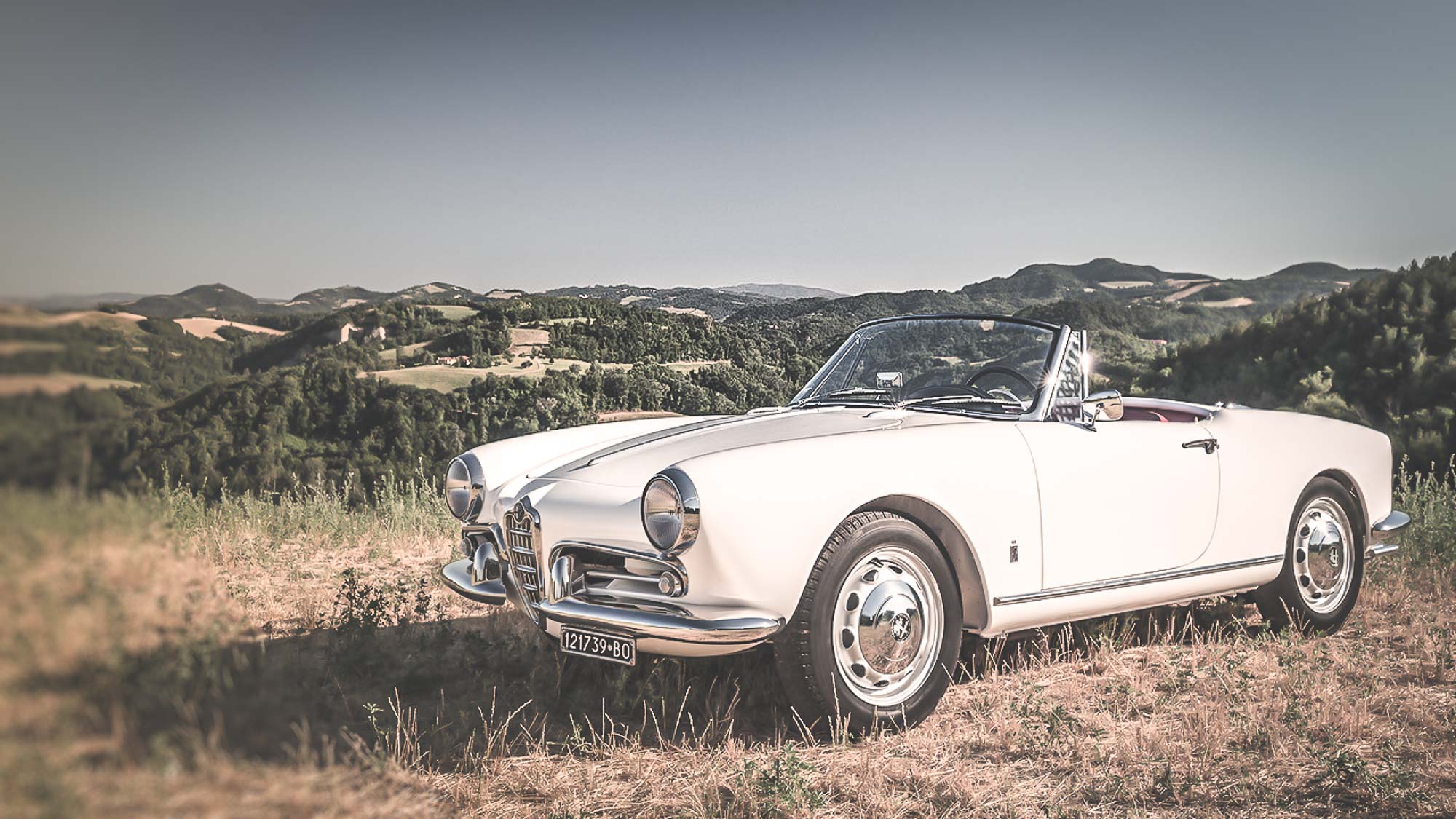 Among the foreign cars, there were interesting options, but these were mainly for rich kids; Lamborghini didn’t yet exist, OSCA was a car company from Bologna but at the time produced only racing cars, Maserati produced exclusive but very expensive cars, and Lancias were designed for distinguished noblemen.

As such, an Alfa Romeo was the most suitable choice for a young man looking for an everyday sports car. Raffaele’s family gifted him a new Giulietta Sprint ― obviously red ― that was suited for driving in the countryside, day and night, and it was a coupè smartly styled by Gruppo Bertone.

It was certainly a good-looking car ― and came equipped with up to 4 seats ― but the ladies in town would have surely appreciated, more than the Sprint, a guy driving a Spider. In 1959 Raffaele saw a Giulietta Spider in the shop-window of a car dealership: it was white with an all-red interior.

“What else would Raffaele like to own? Maybe the ‘Veloce’ version: a car with a double carburetor.”

That particular Giulietta was different than all the others: the engine was upgraded to have twin-carbs. Only experts would be able to recognize the special model, with only a few samples ever produced. The Veloce was more expensive than the standard model but would make all the difference during Raffaele’s night rides.

Maybe he didn’t notice that it was a second-hand car (the seller didn’t tell him), or he had been dreaming of that car for a while; either way it was a quick deal for the exchange, and Raffaele came home not with the red Sprint, but with the white Spider Veloce.

It was such a special car that its owner drove it with unbelievable care. Opposite of how he used to treat his Sprint, during the day the Spider was parked in a “reserved” parking spot at his farm. Raffaele drove a more practical Fiat Topolino Belvedere during the daylight, then ― after the sun went down ― he exchanged the cars.

With his rare Spider Veloce, he drove to the main bar in the village, waiting for his friends. Once everyone arrived, they started the “races”: from one village to the other (with no official time-keeping). The last to arrive had to pay for everyone else’s ice cream. That was how these guys used to have fun.

With his Veloce, Raffaele won the race many times, but he also drove to other places, such as Riccione, Vale Ceccarini: it was one of the most popular seasides where young boys and girls used to have fun. That smart white and red Spider worked as a magnet for young ladies; on some nights, four seats of the Sprint came in handy, because there were so many ladies packed into the car.

“Sometimes Raffaele drove with two girls on the right seat, and the one beside him already knew that at every gear shift, a hand would touch his leg.”

Before the sunrise, the car was safely parked in the garage. The next day, the farm’s caretaker would wash and clean the car for another foolish night, always with the top down so that Raffaele could jump in and out without opening the door, like James Dean.

When Raffaele got married, his trusty Giulietta carried the couple through their honeymoon in Spain; equipped with a black hard-top and a luggage rack necessary for such a long trip.

After a separation lasting more than 40 years, Raffaele met his Spider a second time. The reunion brought back his memories of romantic feelings: the same engine, same exhaust for the remarkable power of 100hp, same distinguishing marks that just him and his car knew as if it was a secret code. The kind of emotions that only a few cars can give.

From the roar of petrol to the hiss of electricity: unimaginable 70 years ago, when the world championship was born. And yet the electric motorbike world championship is a reality today. On September 15th, along with the MotoGP, the MotoE also took to the track: the Grand Prix of San Marino and the Riviera di […]

The Contest of Elegant Cars

Every year, the Concours d’Elegance Villa d’Este astonishes all those on the shores of Lake Como, with extraordinary cars. The Concours, organized by BMW Group at the end of May, takes place between Villa d’Este ― on a Saturday, just for participants or guests ― and Villa Erba park. It’s like an open-air museum where […]