«The higher you climb, the more you show your ass.»

Andrea Camilleri would have turned 94 today.
94 long years of his humour and irony condensed in this motto, which was originally Montaigne’s. He kept these words in his head through all his career as a reminder to always keep his feet on the ground. And to shave his face every morning, too. You know, to him it was a sort of ceremony before writing: the moment he gathered his ideas before letting them out on paper, in his studio, surrounded by his books.

Camilleri’s most peculiar feature – the man’s, not the writer’s – was his voice, hoarse and raspy, serene, with a strong Sicilian accent. Andrea Camilleri was a kind of troubadour, a real storyteller, the last of the Greek rhapsodists. In his last interviews, despite his age, his voice revealed a surprising strength for a 93-year-old man: sharp, forward-looking, passionate, ironic. But most of all, his deep sense of compassion and humanity.

«If I could, I would like to end my career sitting in the middle of a square, telling stories, and at the end, walk among the audience with my hat in my hand.»

He expressed this wish during the press conference of the show “Cain’s Self-Defence”, in Rome. He never got to perform it: he died a few weeks earlier, but he ended his long and successful career as he wanted: telling stories. 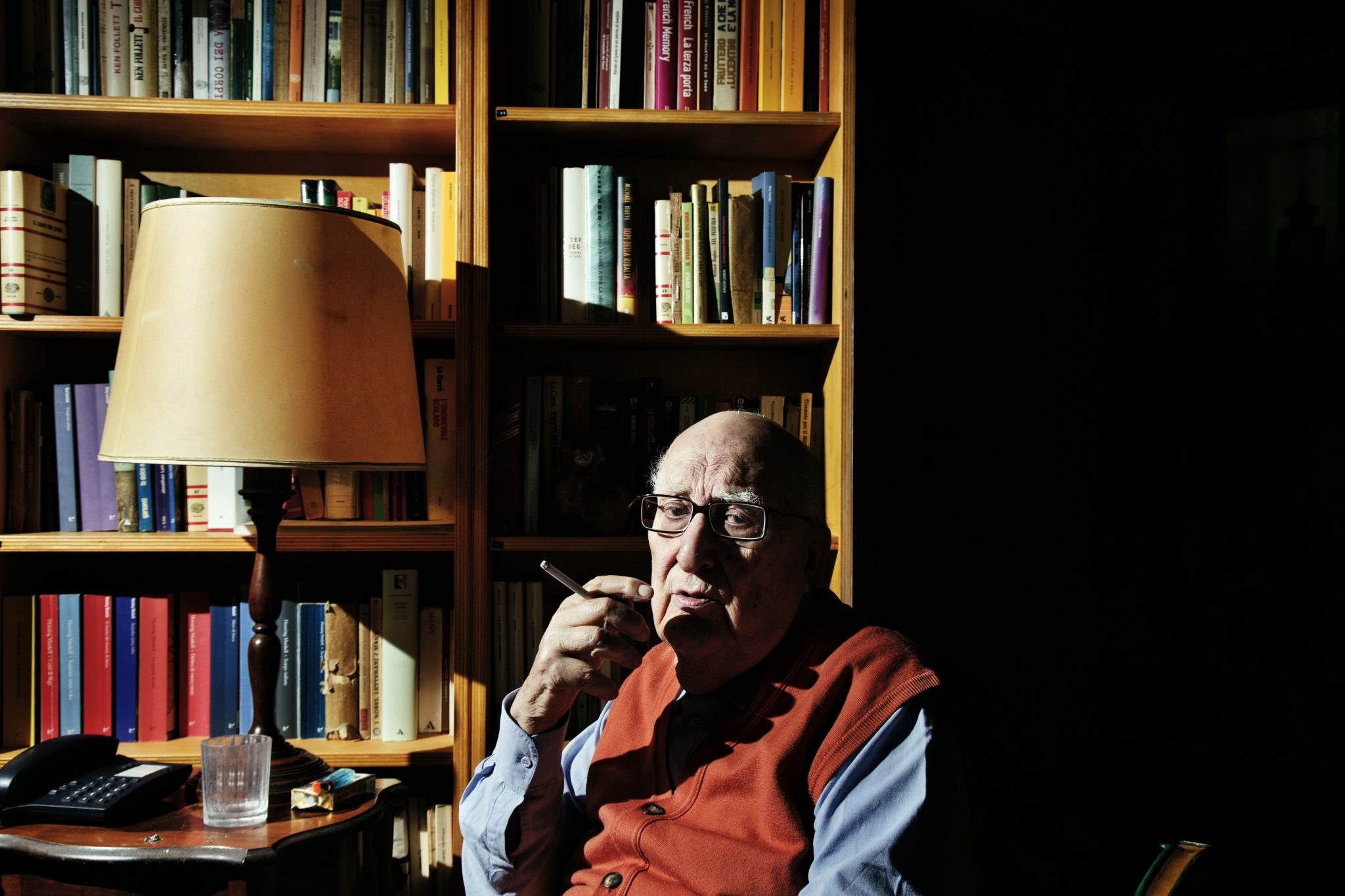 «Since I am blind, I can see things clearly.»

Grey-headed like all old wise men, blind like Homer, the father of all writers. Camilleri had the art of narrative in his blood, as a cultural heritage: the island he was born and raised on, Sicily, is well-known for the ‘pupari’, puppeteers who invented tales of knights and princess. And long before that, Sicily was part of Magna Graecia, a land of poetry and blind rhapsodists like Homer, whose name means “the one who cannot see”. Camilleri was blind, too. He claimed to have become a better writer since he lost his sight, like those little birds that sing more sweetly because they are blind. Deprived of his eyesight but nevertheless forward-looking, like the Greek fortune-teller Tiresias, the subject of his last show, Conversations about Tiresias.

The history of the Greek theatre of Syracuse is more than 2000 years old: an old man sits on an armchair center-stage and talks for two hours, alone, without any script or notes. “Conversation about Tiresias” is considered Camilleri’s legacy, his literary will. A dialogue with both the character and the person, a long tale about literature, mythology, history, from Homer to Virginia Woolf, from Ovid to Dante, from Cesare Pavese to Ezra Pound.

When he was a kid, his grandmother made up stories for him about ordinary objects coming to life. Then he discovered the pleasure of reading, the theatre, the art of writing. The idea for his first novel developed talking to his father, at his bedside. He told the whole story aloud before he wrote it down in a language that he invented himself: Vigatese, a mix of Sicilian and Italian. That story became “Il corso delle cose”, his first novel, rejected by ten different publishers. Who could have imagined that dozens of his books would become best-sellers? He wrote more than a hundred novels, making the saga of inspector Montalbano one of the most-read Italian literary works abroad.

He never made distinctions between “high literature” and “popular literature”: his readers considered him a grandfather, a teacher, a family man. A lot of people – he said – used to write to him that they weren’t fond of reading before Montalbano, but then they fell in love with books. So Camilleri tried to mention some other literary classics he loved in his thrillers: in this way, he hoped to arouse people’s curiosity. The Sicilian writer recently passed, but he is not done telling stories: his publisher Sellerio has his late novel, the ‘end’ of Montalbano. Not the end of Camilleri, though. He arranged a meeting before saying goodbye to the audience in Syracuse:

«I would like to meet you all here, on a night like this, in a hundred years!»

Who knows. We might not be there, but he definitely will.

Books to enjoy on the balcony, during the last golden days. Possibly with a coffee granita in your hand – if you are so lucky.

The Brewer of Preston: a true story, told through the writer’s fantasy.
Noli Me Tangere: a missing woman sets in motion a novel about identity, loss and memory.
Hunting Season: Camilleri’s first best-seller detective story: set in Vigata in the 19th century.
The Shape of Water: the first novel in the celebrated saga of detective Montalbano.

Maybe you don’t know him, but you know his works for sure. Franco Albini was a man of few words, an icon of industrial design and architecture and an open mind that knew no boundaries.   Visualizza questo post su Instagram   Un post condiviso da Alice Rawsthorn (@alice.rawsthorn) in data: 14 Gen 2019 alle […]