No flashy lights or fancy signs, just a simple shop window. On the glass, the words that showcase the tradition: “bicycles”, “instruments”, “cycles”. Further up, the name untouched by time: Officina meccanica Edoardo Bianchi.

In the heart of Milan, two kilometers and 133 years away from the futuristic Bianchi Café & Cycles in via Cavallotti, in 1885, a humble shop was opened. A shop that became a part of the history of sport, cycling and Italian society.

Young Edoardo Bianchi, at 20, already had great ideas. Born from a poor Milanese family, he lost his father Luigi when he was just four. He spent another four years in the orphanage “Martinitt”, and then started working at the age of 8 in a blacksmith until he became 18. Tough times, but important in the boy’s growth.

In his shop in Via Nirone, Bianchi began producing bicycles, as well as ball bearings, surgical instruments, electric bells, and many other items. He was able to mix his intuitions with the innovations of the time, making some of the first modern bikes.

He took the bike chain from Vincent, a Frenchman, and took the tires from Dunlop, mixing them with the idea of lower pedals and wheels with a smaller diameter. It was a small masterpiece.

“His extreme care for quality and eye for innovation are pillars which remained solid, even when, shortly after, he started producing motorcycles and cars.”

He expanded in his first 20 years from Via Nirone to via Bertani, via Borghetto, via Nino Bixio, and Viale Abruzzi, covering the whole city and expanding the projects all the way to the court of Queen Margherita. 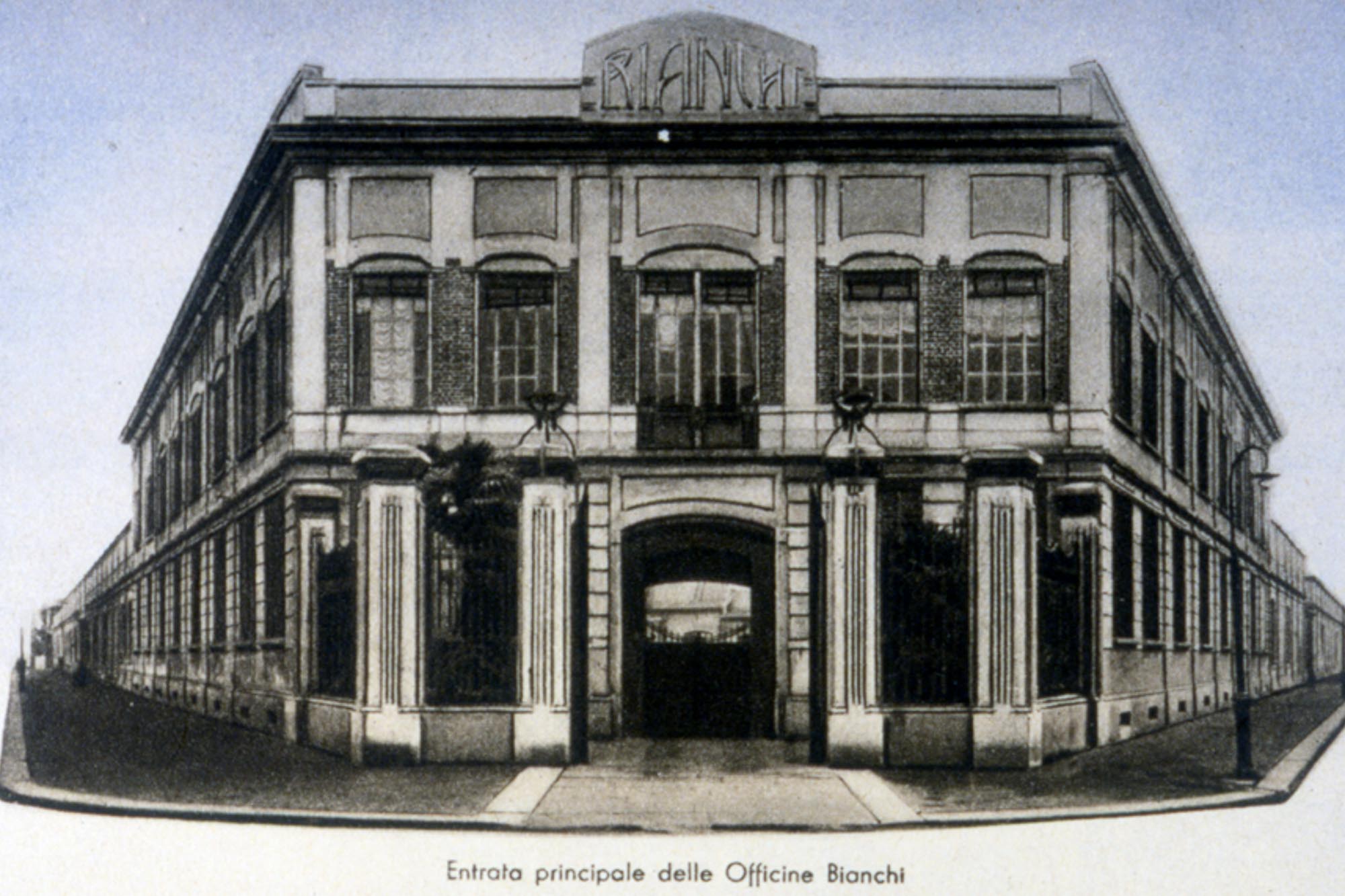 In the Royal Villa of Monza, in 1895, Bianchi created for her the first bicycle to be made for a woman, and he even taught her how to ride it. Thanks to this, he became the official “Royal supplier”, placing the symbol of the Savoia on his products. He was becoming famous in Milan, Rome, Bologna, and Paris and a number of his objects were featured in various exhibitions around the country.

The economic crisis of 1907 brought a great deal of trouble to many small entrepreneurs and artisans, but luckily not Bianchi. During World War One, he even produced bicycles and motorcycles for the army, doing his part to fulfill the large demand for war machines.

“His prototype for soldiers, to be used off-road, from the Alps all the way to the deserts, is the forefather of modern mountain bikes.”

It was from that moment onwards that the company decided to minimize the production of cars and focus on the bicycles and motorcycles. 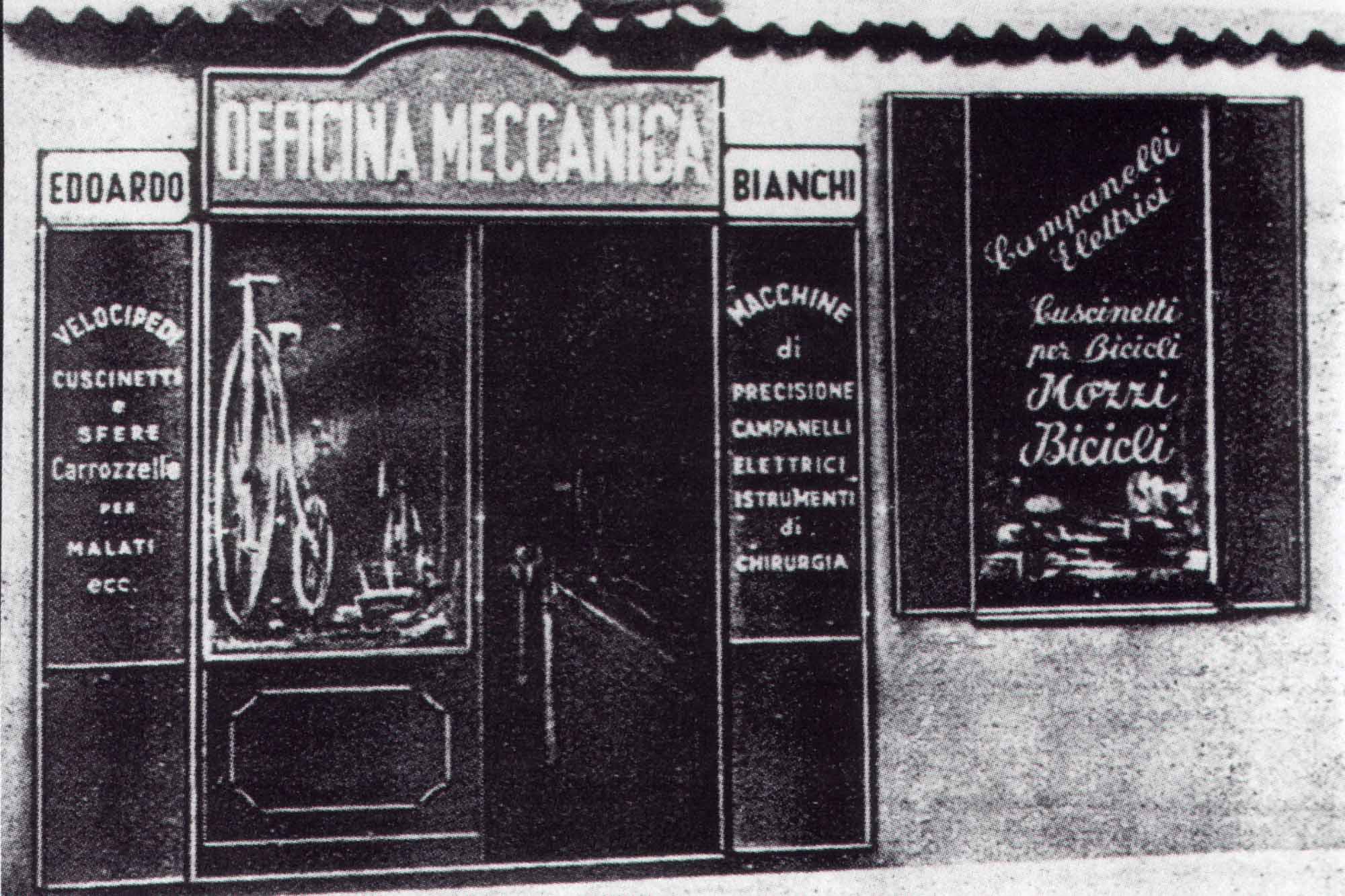 But more than anything, more than kings, political allies or impressive sales numbers, what made “Bianchi” a legendary brand were the great sportsmen that used the products. Initially, almost by coincidence; the young Edoardo simply believed races were the best way to test new designs or products before mass producing them. Over time he became increasingly passionate about competitions.

Tazio Nuvolari and Alberto Ascari are the two sporting legends that linked their name to that of “Bianchi” cars, but those who made the brand truly legendary were the cyclists, some of the best in history.

After the war, Italian society was struggling economically, and the use of bicycles was very common. It was a mode of transport that could be used daily if necessary. It became a symbol of mobility, of work, of moving out of the war and into the future, a means to move on to better, glorious, times.

“Fausto Coppi is the one who represents this time more than anyone. He was a champion who left an indelible mark on cycling and on Italian history. With him, we associate heroic fatigue, the images of his lonely rides, his legendary cycling victories, each marked by the strength, the stamina and the two wheels that accompanied his achievements.”

His rivalry with Gino Bartali lit up the enthusiasm of the entire Peninsula. Moving from the Legnano team, with whom he had won his first Giro d’Italia, Coppi spent 15 years with Bianchi, writing the history pages of the sport.

In 1947, he became World Champion and won his second Giro. And then, 1949 was the year of his epic victory at the Tour de France. When he fell at Saint Malò, everyone thought he had lost, but he recovered more than an hour on the French leader Marinelli, winning ahead of Bartali.

That year he became the first competitor ever to win both Giro and Tour ― a double that was considered impossible at the time ―, and he also became World Champion. In 1952, he won the double Giro-Tour again, and, in 1953, he won the Giro for the fifth time. All these victories became part of the history of Italy and were subsequently turned into literature, films and popular stories, marking that age forever.

“A man leading on his own… his shirt is white and blue… his name is Fausto Coppi,” said Mario Ferretti’s radio commentary of the Cuneo-Pinerolo stage at the 1949 Giro d’Italia.

The blue was in reference to the classic “Bianchi sky blue” ― actually more like a watery green color, but it did change throughout the years ― a color that accompanied first Coppi, but later Girardengo, Gimondi, Pantani, Bugno, and many other legends of the sport. 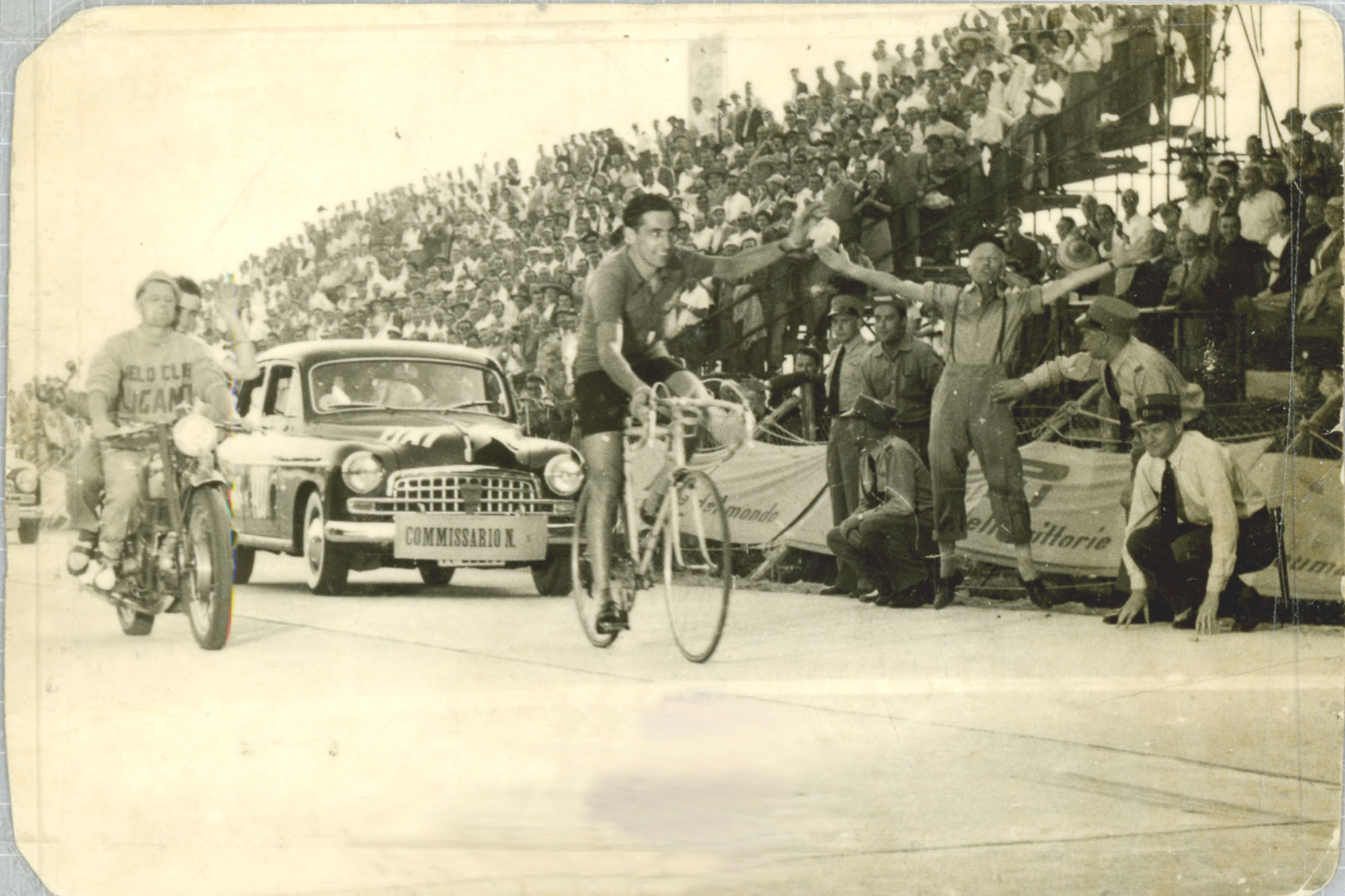 The Bianchi team won 12 Giro d’Italia, three Tour de France and five World Championships, amongst other victories. Bicycles and champions whose stories were told throughout the decades following, leading by example of strength and technical ability.

These images from the past can be admired nowadays in the Eroica, a traditional exhibition that brings together old bikes and the associated clothes to showcase the history, with Bianchi being a pillar of it.

A real Italian miracle, born in the center of old Milan. To put it simply, even today, there is the Officina meccanica Edoardo Bianchi, available to everyone. 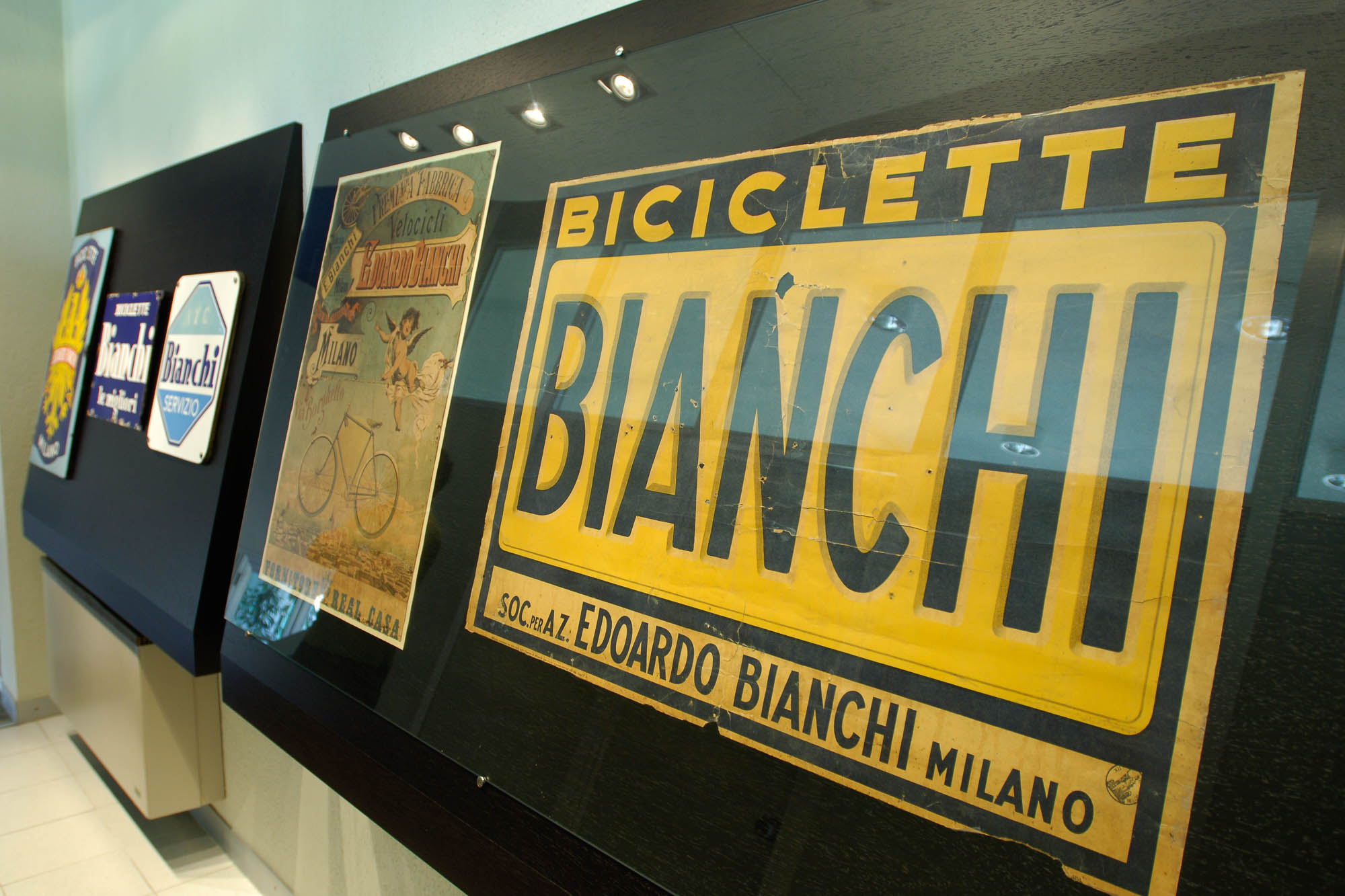 All these photos are by Bianchi

There was a time, not so long ago when Italy was playing in the World Cup. There was even a time when the Azzurri didn’t even have to play qualifier matches; as host nation, they were automatically invited. This time was 1990, when the FIFA World Cup took place in Italy, for the first time […]