“The eyes can mislead, a smile can lie, but the shoes always tell the truth”: Gregory House from “House” said. The caustic doctor knew very well that by observing shoes you can understand a lot about a person. And the ancient Greeks and Romans knew this well before him.

We want to take you on a journey entitled At the gods’ feet. The art of footwear in ancient Rome, period movies and contemporary fashion: just look out a window, the one through which we will take you to Palazzo Pitti in Florence, where and exhibition should have been hosted in these days.

Put down your shoes, we’ll tell you about those.

In antiquity, shoes were one of the very first forms of social communication. For Greeks and Romans, shoe-shapes and -colours told a lot about sex, wealth, social rank and work. And that’s not all: men of the classical world were aware that special skills were needed to make shoes. Plato even called the art of shoemaking “a true science”.

The approximately 80 pieces (including works of art, reliefs, archaeological finds and painted vases) document the main footwear used between the fifth century BC and the fourth century AD. 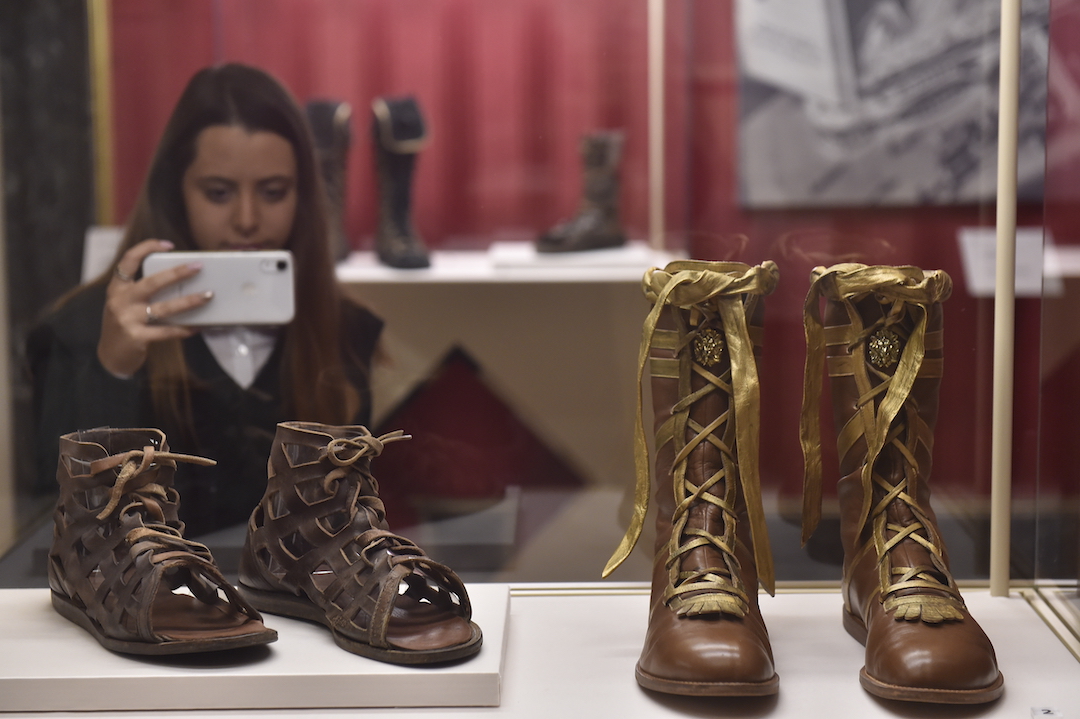 Those we call sneakers today, for example, were called trochádes in the Greek world: they were the most suitable for walking and running, and they were the most popular shoes among ordinary people… but no aristocrat ever wore them. The same types of shoes could have a different meaning if worn by a man or a woman. The krepídes, for example, were high sandals suitable for long marches and journeys. If worn by a man, he was normally a soldier; women who wore them, on the other hand, belonged to the lower classes. 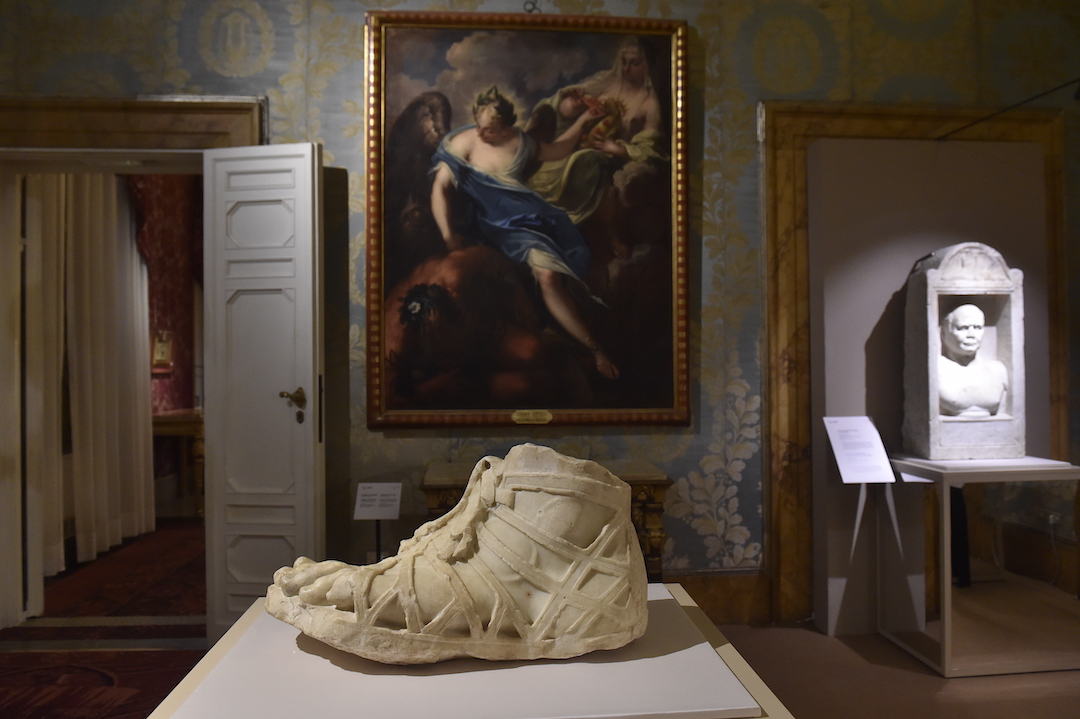 Warriors and cavalry could be recognized by the embádes, similar to today’s hunting boots. Peasants wore closed ankle boots called perones. And to spot a philosopher in the crowd, it was enough to look for those who wore closed, low shoes that left only the instep uncovered; they were made with palm leaves woven by specialized craftsmen and were very expensive. 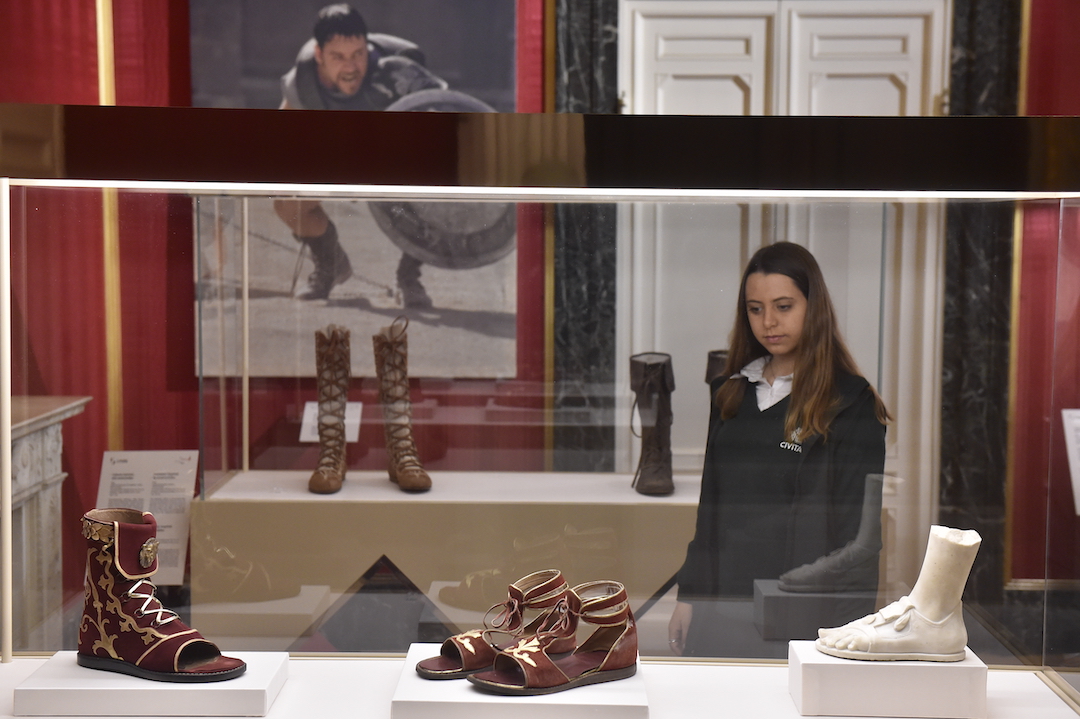 An art, and also a science

The art of shoemaking, more than many other expressions of classical craftsmanship, was the result of refined technological knowledge.

Interest in this discipline exploded in the 1600s. The first organic study was due to the son of a shoemaker, Benoît Baudouin, who later became head of the major hospital in Troyes, France.

Benoît wrote De calceo antiquo (“The ancient shoe”), with which this discipline was supposedly born. The doctor-writer described different types of footwear known from Greek and Latin sources, printed detailed plates for individual models, offered overall figures showing them worn, and showed images of monuments for comparison. A real information goldmine. Other scholars have also added insight into the subject. Some have gone so far back in time as to investigate even the types of shoes worn by Jesus (who is always wrongly represented barefoot) and Adam and Eve.

The study of the shoes fascinated above all the French and Anglo-Saxon worlds Italy is instead new to this branch of studies, and was “baptized” when Italian imported the neologism calceologia (from the English word calceology, in its turn from Latin calceus, “shoe”). But science, throughout the Western world, is becoming increasingly interested in this subject.

A study published in the Journal of Research in Personality, led by researchers at the University of Kansas in the United States, has shown that footwear is a reliable source of information about who wears it, more than we imagine: psychologists have shown that even just on the basis of how feet are “dressed”, we build a very truthful opinion about others. The study involved two groups of participants. The members of the first group were asked to provide photographs of their favorite shoes and to reveal detailed information about different aspects of their lives and personalities. The subjects in the second group were shown the photos and asked to imagine the profile of the shoe owners. The results were surprising: in the vast majority of cases, they were able to infer most of what members of the first group had revealed, even guessing income, overtness, emotional stability, the ability to form relationships and political preferences.

Krepídes or embádes. The names of ancient shoes tell us nothing, yet many of their shapes are in our social imaginary. 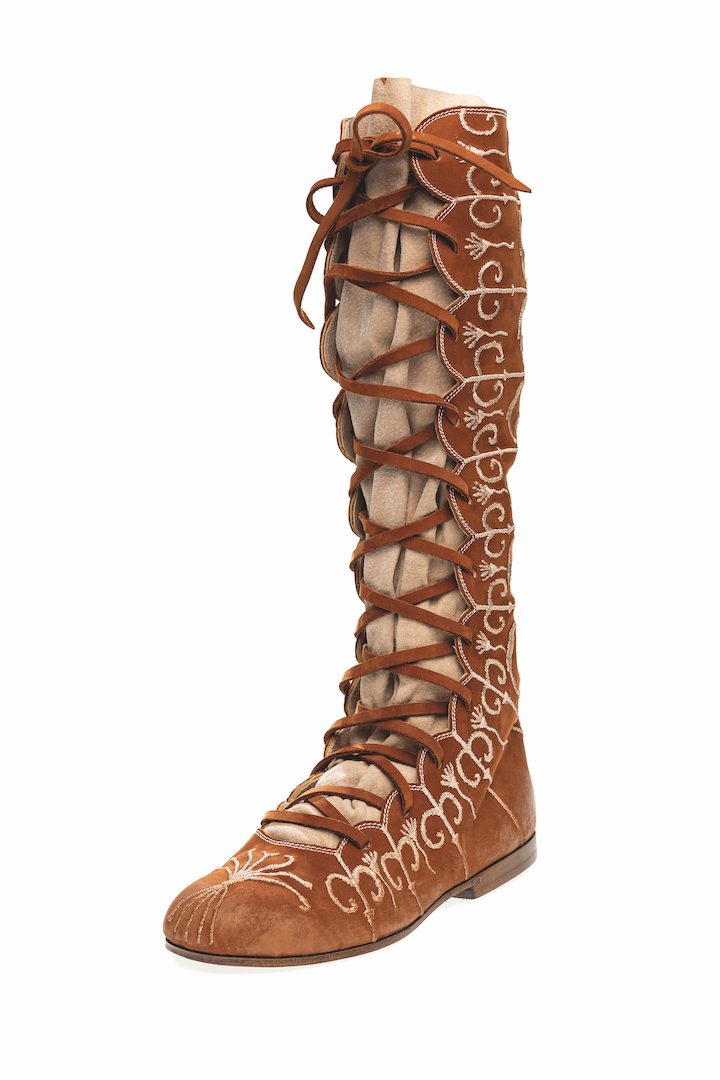 We’ve seen them in films like Ridley Scott’s Gladiator: the most luxurious ones were at the feet of Maximus Decimus Meridius (Russell Crowe) and Emperor Commodus (Joaquin Phoenix) in the photo above. And then again in Alexander by Oliver Stone with Colin Farrell and Angelina Jolie. 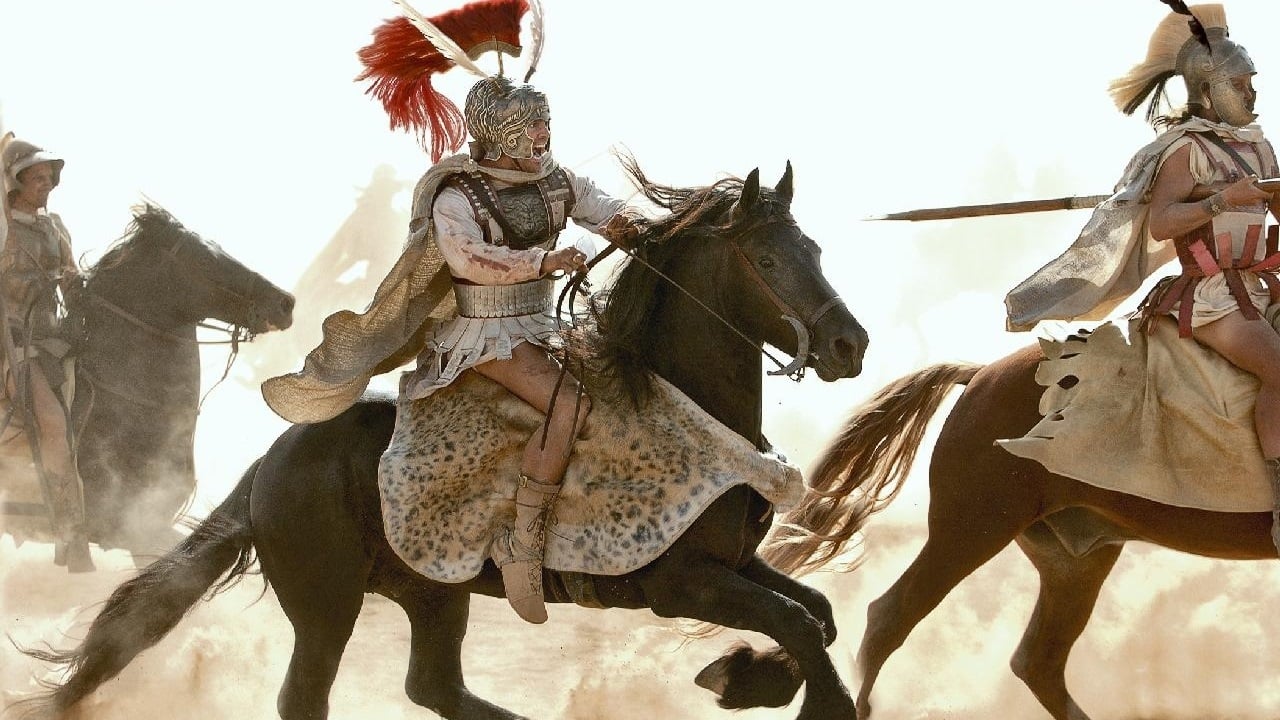 The unforgettable Liz Taylor wore in Cleopatra a revisitation of an ancient sandal, on a platform sole (photo below) in leather, realized in 1961. 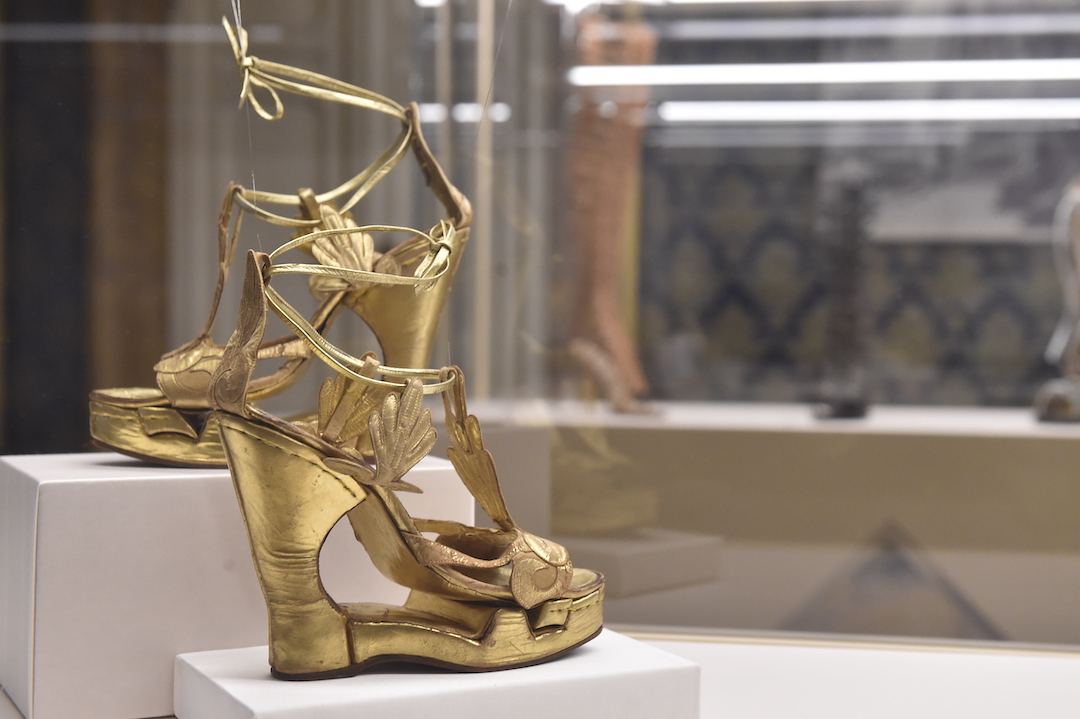 These films’ allure has also engendered ideas in contemporary fashion, providing designers with the opportunity to create models inspired by ancient Rome. 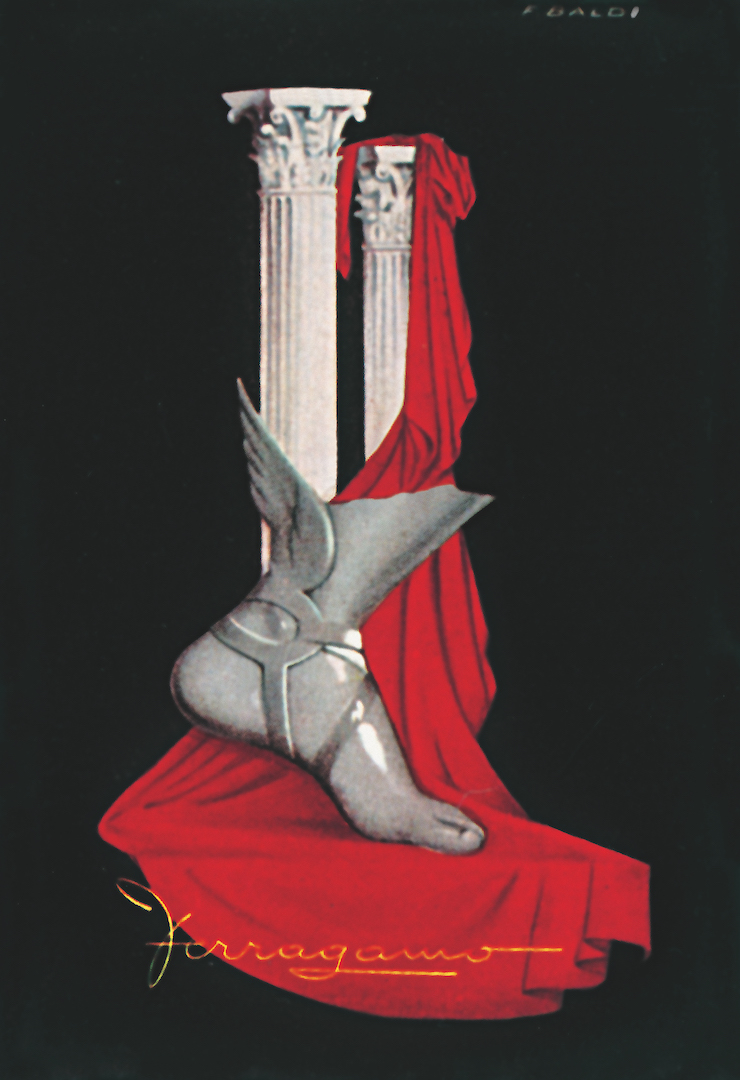 In these films, you can clearly see how the decoration of shoes characterized the expression of political and economic power. The most emblematic case is that of bright red shoes (worn by the Roman senatorial class) or black leather boots (worn by the city’s most prominent aristocrats), which both denounce a high status perfectly.

In order to distinguish themselves from the lower classes, the wealthiest Roman families had a moon-shaped ornament applied, which could triple the cost of the shoe.

More than a shoe: an emblem of rites of passage

Fairy tales, myths and literature, illustrated on painted ceramics, are full of anecdotes about the symbolism of women’s footwear, especially as emblems of rites of passage.

In the classical world, before leaving her father’s house, the young bride wore particular shoes, the nymphídes, which had a double symbolic value: they served to cross the border between the family home and the outside world, but also the border between being a young virgin and an adult woman. It is no coincidence that Cinderella (whose history dates back to ancient Egypt) got to the prince with a slipper.

In short, footwear was not just a simple clothing accessory: shoes were fundamental objects in the history of costume, culture, and civilization. Since the dawn of time, shoes have been an iconic and immediate business card, an open book to read at a glance. An important message, to be deciphered, yesterday as well as today.

It’s the king of “hybrid” clothing ― a bit extravagant, but with an almost magical power to become a “classic.” Yes, you got it, we’re talking about the polo shirt; that perfect mix between a t-shirt and a button-down. It has the softness and comfort of a t-shirt, but the elegance of a button-down, with […]