When dreams traveled in a pixel Ferrari

I was not yet 10; the school had just finished, there weren’t many things to do in Milan for a child of my age and my parent’s compulsory order was “You must visit your grandparents’! I left town and the sultry heat to find friends you hadn’t seen or heard from in a year, leaving certainties behind only to face uncertainties with a few doubts in mind: will I have fun? Will they accept me back into the group?

On the radio in my father’s blue 127 towards central Italy they broadcast Sotto questo sole (Under the Sun) by Baccini and the Bicycle Thieves several times. Warm air came in through the window and I realized, at that very moment, that my summer was really beginning.

It was bound to be a long summer, with the World Cup in Italy (excitement was palpable and contagious), the mascot Ciao, cries of victory – but also defeat. A screen that knew how to unite people. I left Milan that Summer, when Argentina made their debut at the San Siro and Omam Biyik’s goal: Maradona defeated. And I would have spent that summer watching the games on a small television: no stadium, no live Notti Magiche (Magic Nights).

The first few days went by slowly. I was too shy to pick up the phone and call those friends I hadn’t seen in a year. Too hot to go for a jaunt hoping to run into familiar faces. Much too complicated for a kid in a pre-mobile phone and pre-social media time.

Luckily, there were bars. Until that summer I could only walk into bars for ice creams or ice-cold froths, always with my grandfather. I couldn’t linger or go to the video game room, the Arcade. We weren’t allowed in. We, little heroes, were told, “A balloon and a bike are better than that stuff.” Maybe they were right. Maybe.

Perhaps it was because of my sad, bored young face, perhaps because of the way I used to hang around the house… but I still remember when my grandfather gave me 500 lire and sent me to the “café” to play with the “macchinette”. That’s what consoles (those hellish machines) were known in his dialect. I grabbed the coin and ran even more than Usain Bolt could; in the meantime, I felt a bit like Vasco Rossi in my head: that moment marked the beginning of a Vita spericolata (Reckless Life).

I didn’t know what to do and how to act once I was in the bar. I was Breathless, could not speak properly and had a few (very confused) ideas that did not come to my aid. I asked to play by pointing to the room, almost like a fresh soul would ask St. Peter to enter into Paradise… in short, I was about to walk into what I thought was a Paradise for grown-ups. They explained to me that to play you needed 100 lire coins, that I would have to change the money; then I could play. I was becoming a man.

It seemed unreal: 4 huge closets screens inside made of a thousand colors and sounds… 4 games, 4 adventures, 4 huge worlds to explore.

I spent less than half an hour playing: I knew none of the games and I had no idea what to do with all those lights, sounds and colors. It only took me a short time to understand that I needed a chair to get a good look at the screen, where I had to insert my 100 lire coins. Shyly, I began to press the buttons and handle the crank (which only years later would become the joystick).

In the following days they allowed me to go to the bar: on the third day, a Friday afternoon, my summer changed. Matteo (born and raised in the village) and Giulio (a Roman who, like me, was spending the summer at his grandparents’), appeared in the doorway. We became once again inseparable: every afternoon from 2 to 5 we were there, glued to our videogames; then we went to the park to play football.

But the world became different for us: everything was made of pixels, every movement sounded and acted like Arcade Games. Out Run made us dream, it was our escape dream, our rock ‘n roll dream.

We started talking about Aero Fighters battles and changing flights and weapons; or about the endless football matches of the 1990 World Cup, dreaming of seeing Italy through to the final and to victory, even after Zenga’s blunder and Caniggia’s goal that shattered the dreams of a whole nation.

Without knowing why, Out Run became our holiday, our escape to the sea or to new horizons.

Long roads or dreamlike landscapes instead of a room in a bar in the heart of Italy, a beautiful blonde girl sitting by your side (at a time when there was obviously no chance to fantasize with the internet), and above all, a Ferrari Testarossa Spider instead of a rickety bicycle. In short, in those more or less long games, we had the best a kid could dream of at that age in the early ’90s. 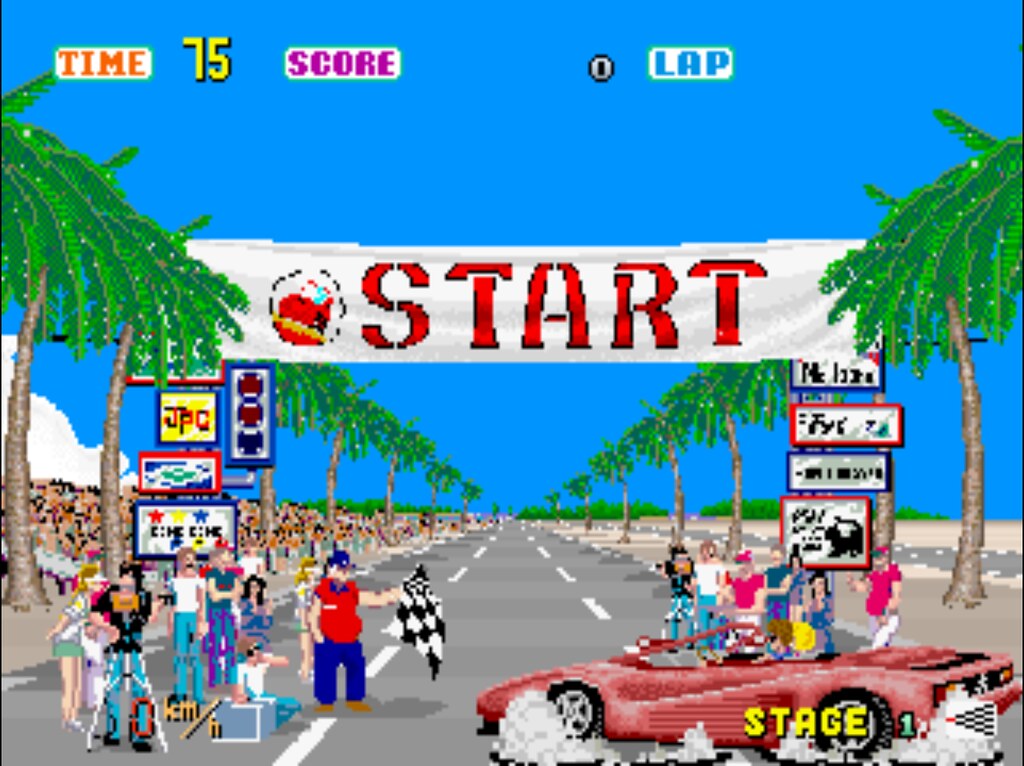 Afternoons of interminable games and drastic choices such as those to make at deadly crossroads when playing your game. Discussions on which road, left or right, was safest to travel.

Hours and hours lived pixel by pixel and just as much time spent telling each other about the spectacular accident or the successful overtaking on board the wonderful Ferrari in which we spent the summer of 1990.

Dreaming of actually driving down those roads in a Ferrari Testarossa one day, with a blonde at your side, rushing towards the Californian ocean or more simply towards the Adriatic Riviera.

He was not only a formidable director, but he was also – all his life – a tireless cartoonist – and inspired many cartoons himself.

You may never have heard of him, but as soon as you read this article you will think: “Of course I know Bob Noorda!” – especially if you’ve ever been to Italy.   Visualizza questo post su Instagram   Un post condiviso da Moodie Comunicazione (@moodiecomm) in data: 8 Lug 2019 alle ore 3:55 PDT […]

In 2017, the world’s most famous car makers design and sell fantastic exotic cars that are fast and so easy to drive. They reach this kind of perfection by investing a lot in research and technology. But on the other hand, these cars lose that exclusivity which was typical of the carefully constructed Italian sports […]